Mid-level water vapor satellite imagery (below) today distinctly shows the dry air mass associated with a high-pressure ridge that has persisted off the coast for about the last month or longer and blocked most incoming storm systems.   A weak system will ride over the top of the ridge tomorrow for a slight increase in NE winds, otherwise little change is expected through Thursday with seasonable temperatures.

An upper level short wave will move southward through the interior PacNW on Friday (image below) for slightly colder weather and a little more breeze in Mammoth before the ridge rebuilds over CA on Saturday for more of the same dry weather and seasonable temperatures.

The model guidance really hasn’t changed its tune since the last update. It is favoring a progressive pattern of short-wave troughs moving through the West Coast every couple of days with most of those systems taking an inside slider trajectory through CA to limit any snowfall in Mammoth.  We are still hoping one of them moves southward with better over-ocean trajectory to pull in needed moisture to produce larger snowfall amounts.

The ECM (image below) and GFS are now showing the upper level system for Sunday to move farther southward now versus previous model runs lately.    The Canadian is still farther northward with the system and keeps almost all the precipitation into the PacNW.

The “wet” models are not showing large amounts anyway.  GFS (image below) has about 0.30” and the ECM has about 0.25” and that would only equate to a couple/few inches of snowfall.  The ECM mean is similar to the deterministic run with about a quarter inch.  So a few inches of snowfall is possible Sunday, maybe a tad more up top.   It doesn’t look like deep powder is possible with this storm system, but low-end powder conditions could happen in favored spots.

The ECM model moves a kicker upper level low into CA on Tuesday (image below) for another inch or two of snowfall.  However, that solution is not well supported by the ensembles that favor a high pressure ridge instead.

The latest deterministic run of the ECM (image below) also moves a rather deep trough southward in CA next Thursday with enough over-water trajectory to produce enough snowfall for powder conditions.  The GFS though (two images below), only shows a very weak trough passing through interior PacNW and the ECM mean is also not supportive and only shows light amounts.   Maybe that model is onto something, we will have to wait and see

The fantasy range GFS ensemble says this pattern will last until the last part of the month now (image below) featuring a ridge along the coast and systems riding over the ridge and into the deserts Southwest.  As stated above, we are still hoping one of them moves southward with better over-ocean trajectory to pull in needed moisture to produce larger snowfall amounts.  I really don’t want to wait until March for the return of a wet pattern (two images below).  WG 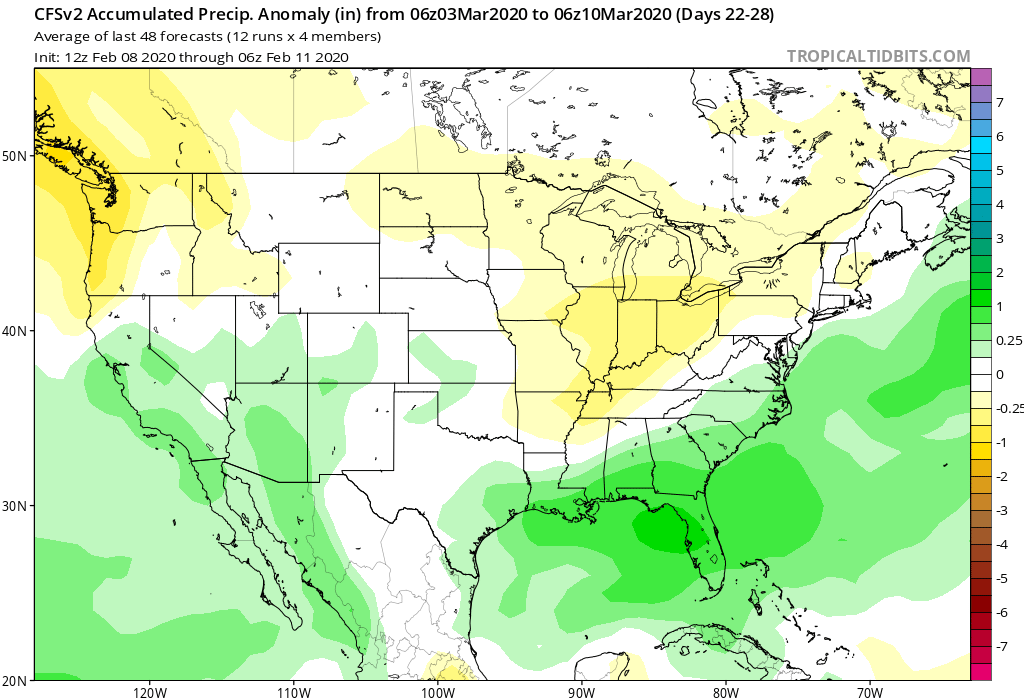