Wed 2/19 through Sat 2/22—No snowfall expected all days except for a chance for light snow Friday late afternoon and overnight—maybe an inch accumulation by Saturday morning.

Infrared satellite imagery (below) today shows high pressure has built into the PacNW with a dissipating weather system having moved through CA overnight with just some cloudiness.  The high-pressure ridge will hold through the end of the week for continued dry weather and generally seasonable temperatures.

Models are now moving a weak cut-off low-pressure system into SoCal by Saturday (image below) and that system may be far enough northward for some flurries or light snow showers Friday late afternoon and overnight and into Saturday.  Not expecting much, if any, accumulation, with all the models showing less than a tenth of an inch liquid.  Good chance it moves too far south for any precipitation.

As has been the trend lately with the weather systems, the latest chance for snowfall from the last post will now not happen as the storm is expected to remain too far north for any snowfall in Mammoth.  The ECM now moves it as an inside slider type storm (image below) moving east of the Sierra on early Monday.  It wasn’t going to be a significant event anyway.

The ECM model then moves another slider type system east of the Sierra around mid-week next week (image below) for probably just some wind and colder temperatures.  Any snowfall from it would be very light.   Weak high pressure will then likely build into CA for the end of next week.

As mentioned in the last post, record low monthly February snowfall is now certainly possible with the latest guidance basically dry through the end of the month.  Both the GFS (image below) and Canadian (two images below) are mostly dry with only the very light amounts associated with the Friday night/Saturday system.   The operational ECM and ECM ensemble mean are similar.

There are glimmers of hope to end the dry spell around the end of February or early March period.  The latest GFS model (image below) shows a favorable solution of a deep closed low right off the coast and moist SW flow into the Sierra.  The ECM mean is showing a pattern of similar geometry around the same time, albeit weaker overall due to large ensemble spread.

And like dangling a carrot in front of our noses, the climate models have now backed off on any meaningful pattern change from early March to almost mid-March now.  The CFS keeps below normal precipitation over CA through early March and doesn’t favor bigger snowfall until almost mid-March (image below).  The latest ECM climate model is similar, but not as wet mid-month.   After two very dry mid-winter months, it seems doubtful that there won’t be at least one storm pattern or two next month before the jet stream retreats northward in April and May, not that it made it this far south too often this winter anyway.  WG 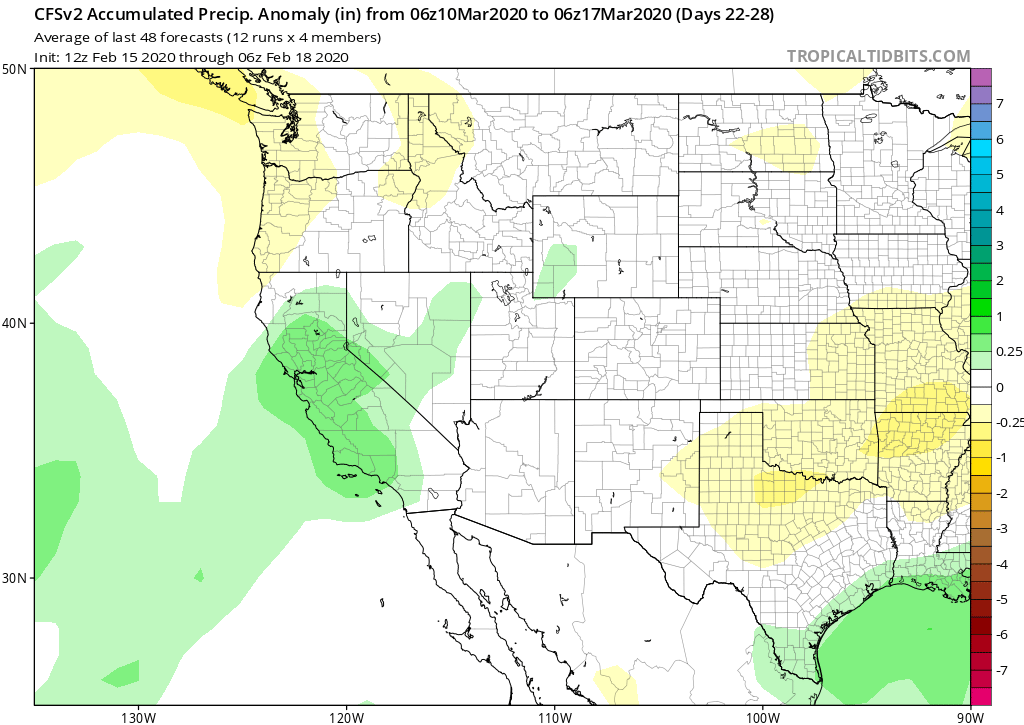