Wed 12/16 —Dry during the day with increasing winds at night, then snow starts in the middle of the night and becomes briefly heavy near dawn, accumulations 2-3” by Thursday AM, up to 4” up top.

Thu 12/17 — Moderate to heavy snow during the morning tapering off by midday and ending during the afternoon/early evening, accumulations 3-4” at Main and up to 6” up top.

The visible satellite image (below) this afternoon shows some passing clouds today, otherwise it is a fairly typical dry winter day and continued dry weather is expected tomorrow with increasing winds during the late afternoon hours and evening. 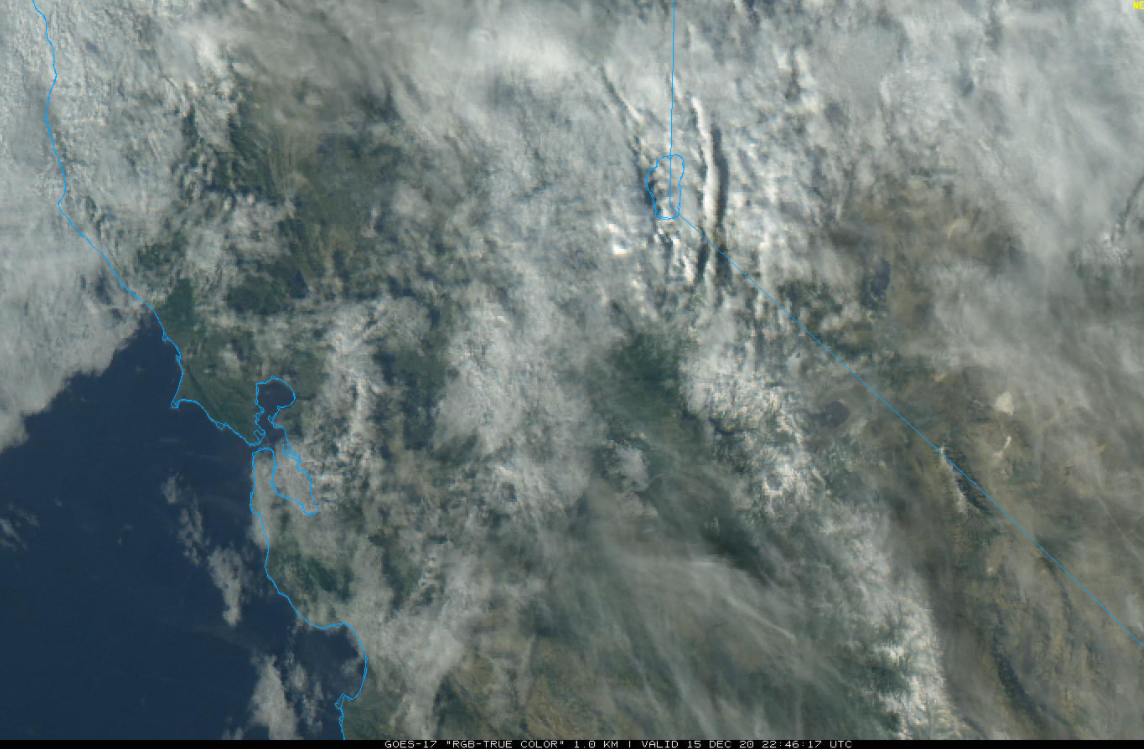 The numerical guidance then moves an upper-level short-wave trough and associated frontal system through Central and Northern California tomorrow overnight and Thursday (image below).  The GFS is slightly stronger than the ECM and Canadian, but all the models are suggesting the fast moving trough will produce a period of moderate to heavy snowfall early Thursday.

The GFS is also the wettest with that model showing about 0.75” liquid (image below) while the Canadian (two images below) is similar to the ECM and has slightly less. The forecast is calling for about 6” of snowfall at Main and up to 8” with around 10”+ up top.  Snow levels will be 5000-5500 feet, so the snow will be fairly typical winter Sierra snow and not Sierra cement, too bad we don’t have good base yet.

Snowfall should end during the late afternoon or early evening hours Thursday followed by dry days on Friday and Saturday as a high-pressure ridge builds back into California.

High pressure (image below) will hold over California and the Mammoth area through the weekend and into next week.  Skies will be mostly clear, winds generally light, and temperatures seasonable.  If you are a fair weather skier/boarder, you will be happy.

The GFS ensemble moves a slider type trough through eastern California around Tuesday next week (image below) and it may result in some light snow showers, but likely just increased northerly winds.

That model then rebuilds the ridge through Christmas (image below) for continued fair and dry weather.  Perfect conditions for the fair weather players.

The fantasy range guidance says there won’t be another chance for snowfall until around Dec 27-29th with the passage of a couple troughs into the West Coast, but current guidance favors keeping the jet stream too far north (image below-purple arrow) for any significant snowfall in Mammoth.

Overall, after the snowfall on Thursday, it is looking mostly dry for the rest of December unless there is an unexpected change.  The key will be if the MJO finally moves into a more favorable region of the globe toward end of the month or early January.

And that is what the latest ECM run is showing (image below) with the signal moving into the western Hemisphere by early 2021 and then possibly moving into the Indian Ocean by mid-January.  Phases 2-3 are associated with above normal rainfall in CA most months during winter and often big snowfall events in Mammoth.  WG