Wed 12/30 – No snowfall expected during the day, then a quick period of moderate snowfall is expected overnight. Accumulations 2 – 3” by Thursday AM, 3”+ up top

Sat 1/2 – No snowfall expected during the day, then there is a chance for light snowfall overnight. Accumulations 0 – 2” by Sunday AM

The visible satellite image (below) shows clear skies today along with a fresh layer of snowfall across the Sierra and adjacent eastern valleys.  Other than some passing clouds tomorrow, dry weather will continue into tomorrow night. 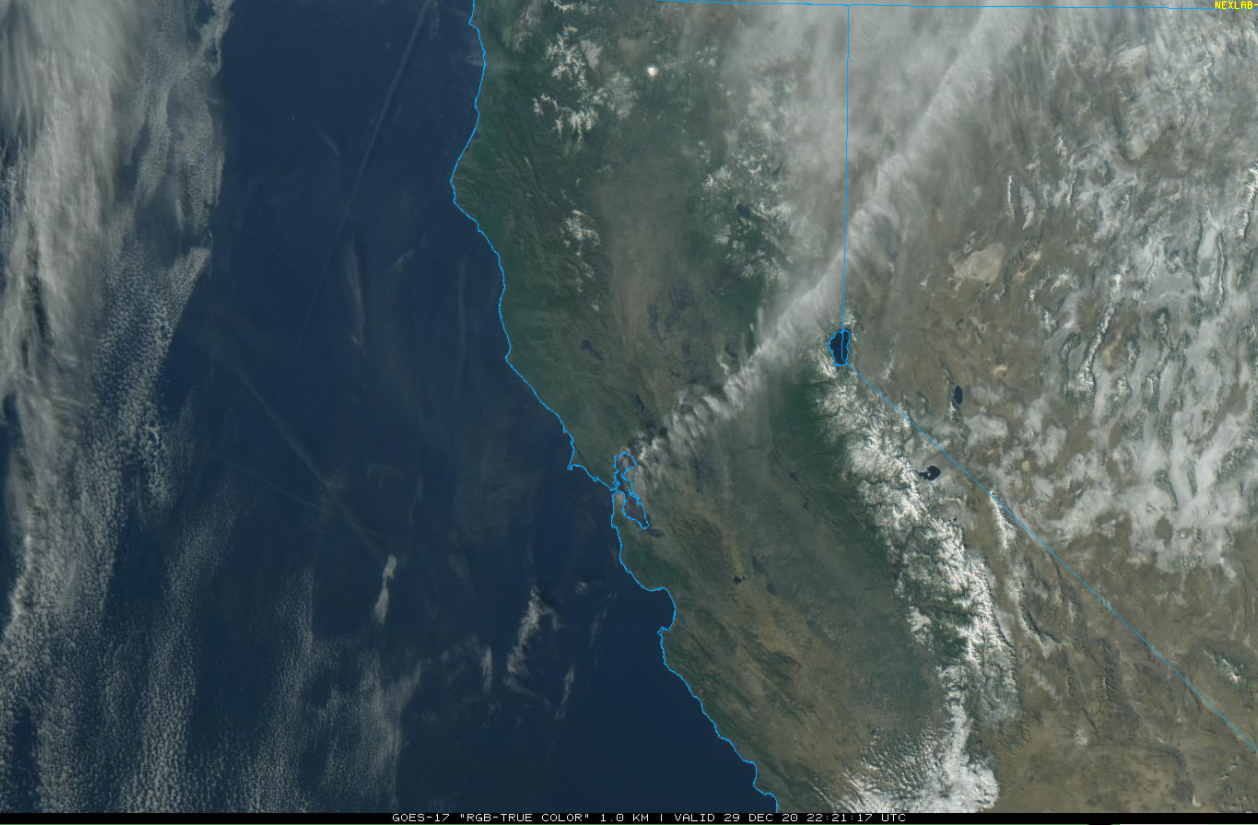 Models are then advertising a weather system dropping southward through eastern California overnight Wednesday (image below).  It appears to have enough dynamics to squeeze out a quick period of moderate snowfall and maybe 2-3” by Thursday morning with the GFS on the lighter side with about a tenth liquid (two images below).

High pressure will then rebuild for the rest of Thursday and through New Years’ Day for fair and dry weather and seasonable temperatures. The ECM then moves the first trough under a strengthening Pacific jet stream into the West Coast on Saturday (image below) with the tail end of the front edging into Mammoth Saturday night.

So it looks like the first part of the weekend will be dry before there is a chance for some snowfall by early Sunday.  The GFS model is much drier with this first wave and washes out the precipitation across NorCal.  The Canadian also washes it out. So at this point, any snowfall this weekend is just a chance.

The favorable pattern change for next week still looks probable as the Climate Prediction Center is favoring MJO activity (image below) to increase during week 2 across the Indian Ocean as discussed in the last post.  And the models have now started to align to reflect this scenario after being mixed only a few days ago.

The ECM model moves the first stronger short wave in the westerly jet stream flow into CA Sunday (image below) while the other models also have a trough, but are slightly farther northward with the placement of the jet stream.

Nonetheless, all models develop moderate to heavy snowfall by Sunday night or Monday morning with the GFS showing about 1.5” liquid for the fist wave (image below) while the ECM and Canadian models have closer to 2” liquid.  It would a warmer base-type snowstorm, but a foot seems like a good bet right snow for the first storm.

All models are then generally favoring the strongest of the short-waves in the deep westerly jet stream flow to move into the state around mid-week (ECM below).  That would result in a long period of heavy snowfall if they are correct.

The latest GFS model is showing about 2.5” liquid (image below) with the storm while the ECM and Canadian have around 3.5-4” liquid.  So the best forecast right now would be between 2-3 feet of snowfall.

Overall, the models are showing good precipitation over the next 10 days with the GFS the driest at 3.5” liquid (image below) while the ECM and Canadian (two images below) models have around 6” liquid.  That would mean 3-5 feet of snow for Main and 5-6 plus up top. The details and amounts will certainly change as the models are often too strong in the extended period, but the idea for a favorable snowfall pattern next week will likely remain set.

The ECM model keeps the storm train rolling through the end of next week with another very deep upper level low pressure system just off the coast at the end of the period (image below).  The other models are mixed with the GFS ensemble mean showing a trough moving into CA under a now west-northwest jet stream flow (image below).  So snowfall could certainly continue into the following weekend, but the ECM model is probably too strong.

The GFS ensemble keeps the jet stream into NorCal until just after the 10th of January when it lifts it northward and develops a ridge (image below) for dry weather.  So there could be a week or so of storminess before a dry period returns.  Hopefully the MJO will remain active after next week and slowly move eastward into phases 4 and 5 second half of January that has been historically associated with a wet pattern for Mammoth.  WG