Fri 1/7 –Light snow showers and/or flurries are possible during the day, ending at night. Accumulations 0 – 1” by Saturday AM

The visible satellite image (below) shows clear skies over California today with the typical dense fog in the Central Valley and the below-normal snowpack over the Sierra. 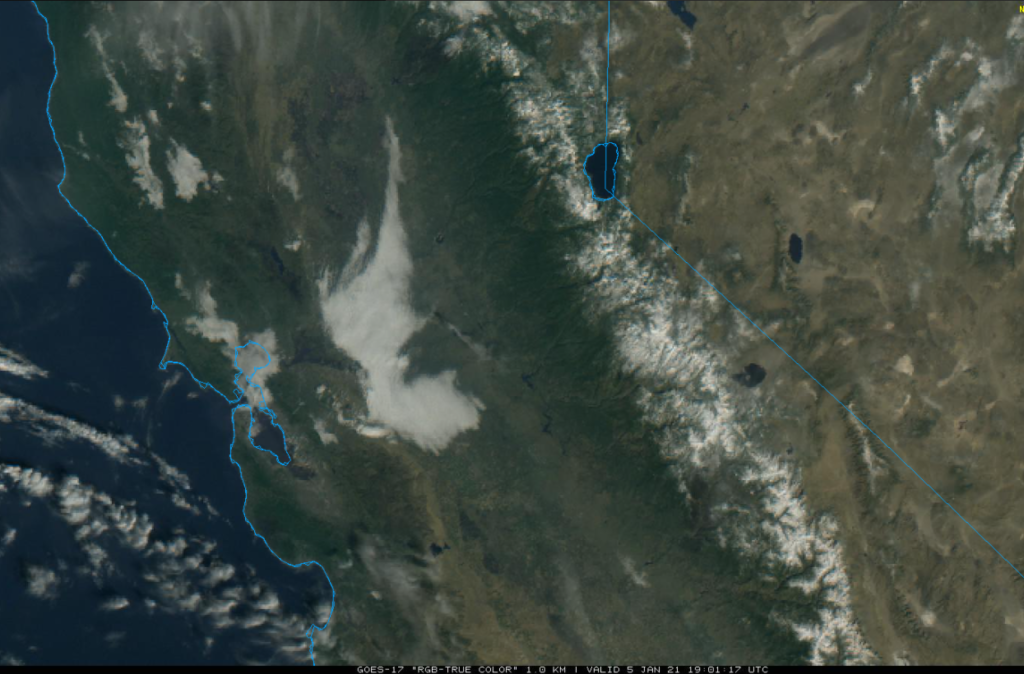 The models move a weather system across NorCal tomorrow and into Idaho by early Thursday (image below) resulting in some passing middle and high cloudiness, but no snowfall in Mammoth with the precipitation staying well north.

Another upper-level short-wave trough will move into NorCal Thursday night and early Friday (image below) and the far southern edge may brush Mammoth Friday resulting in light snow showers and/or flurries during the day, ending Friday night.

The numerical guidance is showing only very light amounts for Mammoth with the GFS (image below) and Canadian (two images below) showing less than a tenth of an inch.  The latest ECM model only has a couple hundredth. So don’t expect more than an inch and possibly only a trace. High pressure will then rebuild into the state Saturday for a return to fair and dry weather.

The longer-range guidance moves one last short-wave into far NorCal or southern Oregon around Sunday (image below) or Monday and there could be some passing clouds for Mammoth, otherwise dry weather will continue through the weekend and into early next week.

The models then favor a strong high-pressure ridge to build over CA (image below) by the middle part of next week that will likely hold through the following weekend for a stretch of fair and dry weather.  If the ridge builds strong enough, it could even result in a January “thaw” by the end of next week.

The fantasy range guidance holds the ridge in place until about Jan 18-19th (image below) when there are suggestions that it will start to retrograde westward.  It would probably be inside slider type storms initially that are typically dry until the long-wave trough moves far enough westward for storms to have an over-water trajectory before moving inland.  That would result in high-latitude type storms that are usually cold with fluffy powder.

If the ECM climate model is to be believed, the long-wave trough will continue to retrograde westward by the last week of January for a return of storminess into California, hopefully far enough southward into Mammoth.

This large-scale pattern forecast by the GFS ensemble for the last part of January is fairly similar as what occurred at the end of January 2019.  There was about 7-10 days of dry weather as a deep trough in the Great Lakes area associated with a SSW/MMW event (see last post more details on SSW and MMW) earlier in the month produced cold weather for the MidWest and East.  That trough eventually retrograded westward by February and lead to a record 207” of snowfall that month.  I can go for a repeat. WG