Fri1/22 – Light to moderate snowfall is expected to develop during the day and continue at times overnight.  Accumulations 2 – 6” by Saturday AM, 6”+ up top

Sat 1/23 – Snow showers are possible during the day, ending at night.  No significant accumulation is expected by Sunday morning.

The visible satellite image (below) this afternoon shows a few high clouds in the Mammoth area, otherwise it is a mostly sunny and windy day. Northeast winds gusted over 100 mph early this morning up top and are still gusting to around 90 mph at the time of this writing. 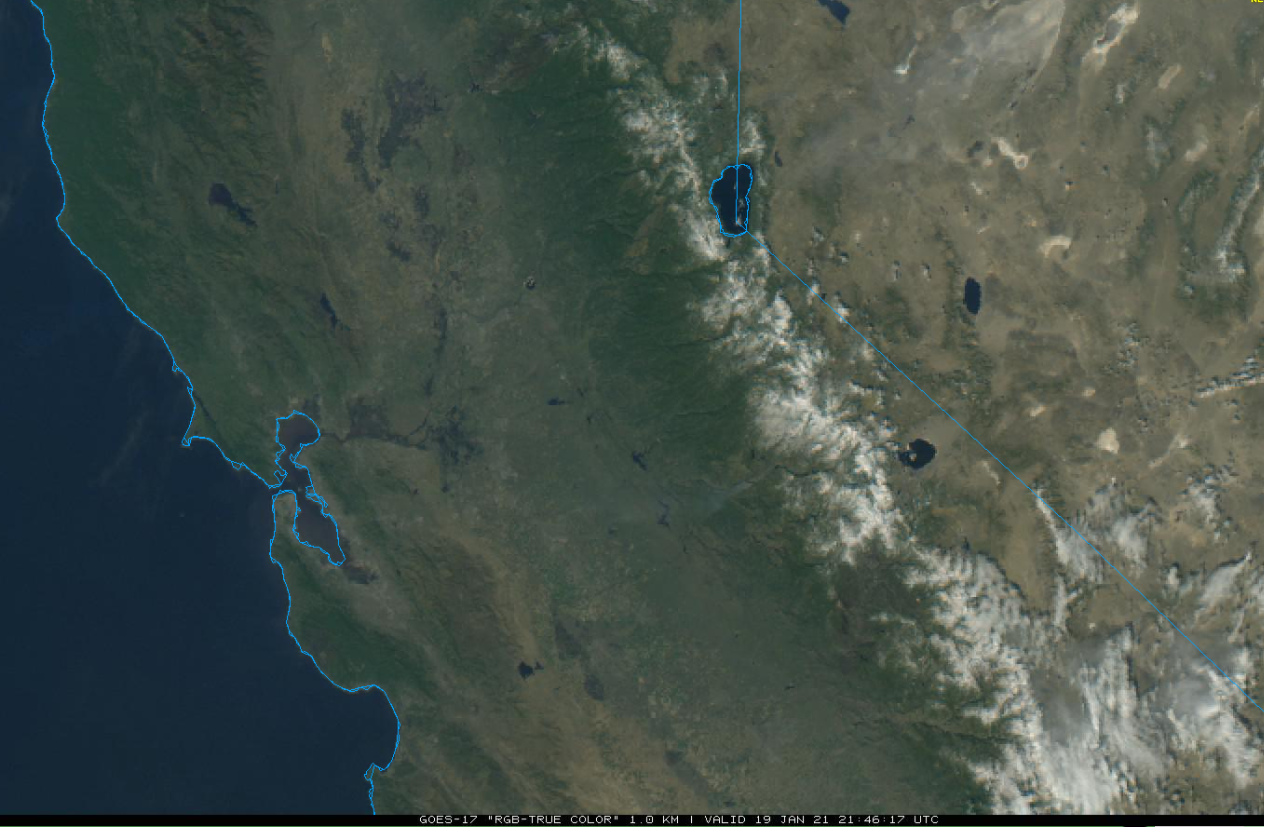 The winds will subside overnight as a transitory short-wave ridge builds over the state tomorrow (image below) for a day or two.  That means sunny skies and seasonal temperatures.

It is a cold system and snow levels will be around 4000 feet.  Amounts won’t be huge as the system will have limited moisture and the snow will be the cold, dry, fluffy type.  There certain could be enough for fun turns Saturday morning.

The longer-range guidance still has not changed much since the last update and that is a good thing as the transition into a more favorable pattern for significant snowfall is looking more likely for next week.

All the models move a deeper upper level trough into CA by Monday (ECM model below) as part of the dis-continuous retrogression of the long-wave ridge/trough westward discussed in the last few posts.  This system will have more a little moisture and dynamics  and amounts could be up to a foot if the wetter solutions verify.

It will also be colder than the previous storm with snow levels possibly as low as 2500 feet on the west side of the Sierra.  That means it will be the cold/dry powder and higher liquid to snow ratios closer to 15:1. There is still some uncertainty, but it looks like the best chance for deeper turns over the next week.

Uncertainty is even higher in the far extended time frame with the ECM model moving the trough eastward Tuesday followed by the next system remaining off the coast for the end of next week (image below) and weak ridging moving into CA for dry weather.

The GFS (image below) and Canadian (two images below) are much different.  They are more progressive with the Monday storm and then develop a much deeper upper level trough off the CA and West Coast for the middle and latter part of next week with a strong jet pointed into California (purple and blue arrow).

That type of pattern would result in a fairly significant winter storm and probably a few feet of powder under relatively low snow levels 4000-5000 feet.  The 10-day GFS precipitation forecast (image below) is showing about 4-5” liquid while the Canadian has about 6” liquid (two image below) for the period.  The ECM model has a little over an inch, but the ECM ensemble mean has 2”.

There are many ECM ensembles that are showing the wetter GFS and Canadian solutions and there is a good chance it could occur.  However, it is not a slam dunk yet and we will have to wait and see if we get our turn now.  The forecast follows mostly the ECM ensemble mean leaning slightly toward the wetter GFS model as the GFS ensemble is fairly bullish about the upper level pattern (image below) and also shows about 3” of liquid precipitation for the period (two images below).

The fantasy extended period is looking pretty good as well as the GFS ensemble keeps the trough in place along the West Coast and CA through the end of the month (image below) and into early February (two images below) allowing storm system and possibly ARs to move into CA and Mammoth.  The ECM ensemble mean also has a trough, just not as deep as the GFS and thus slightly drier.

Overall, the general weather pattern is looking favorable for snowfall to return end of this week and then increase at times through the end of the month and into early February.  The GFS ensemble mean is showing about 4-5” of liquid (image below) for the period that goes into early February and that would be enough to open up a lot of the top areas.  If the 12Z GFS verifies and we get about 8” liquid (two images below), then even most of the big rocks on Climax will get covered.  Fingers crossed. WG