Sat 2/6 through Tue 2/9 – No snowfall expected all days except for a chance for flurries Tuesday night.

The visible satellite image (below) this afternoon shows clear skies across California and most of the West as high pressure off the West Coast coast is deflecting storms well northward. 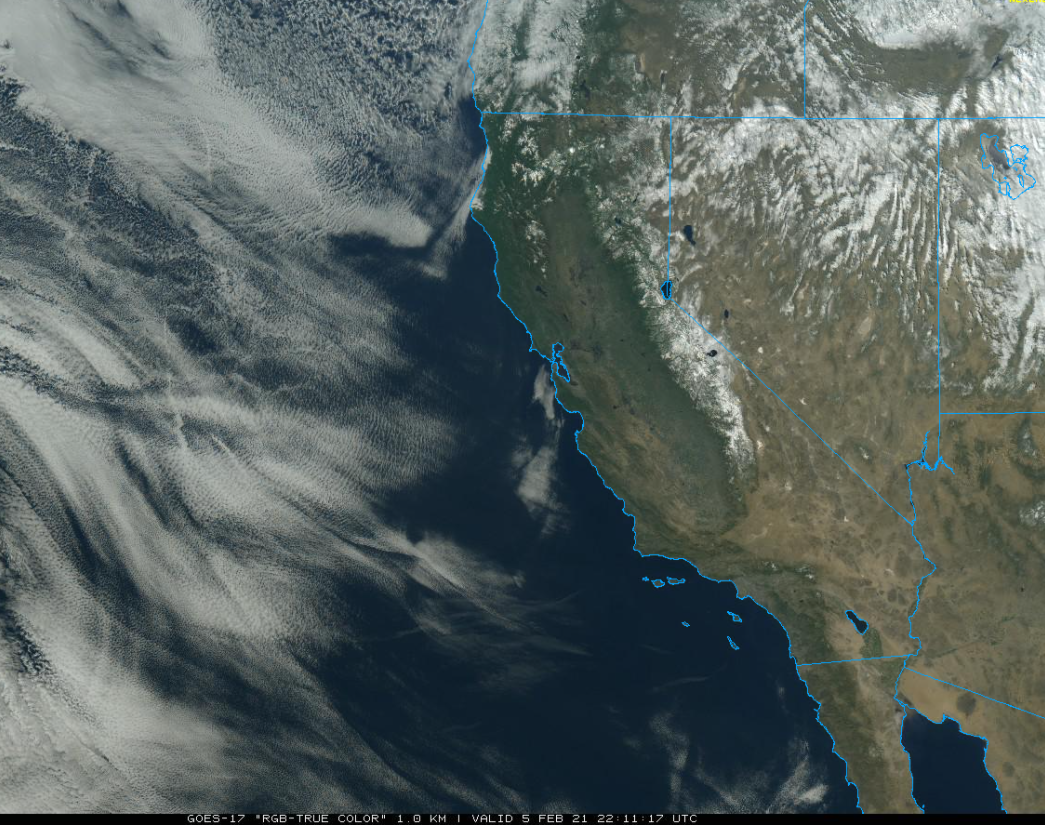 The high-pressure ridge will hold in place through tomorrow (image below) before starting to weaken on Sunday and early next week.  The upper level trough over the central part of the country will edge westward and allow an inside slider system to move through on Monday for cooler temperatures and increasing winds. No snowfall is expected.

Models then try to move a weak system under the northward retreating ridge around Tuesday (image below) or Wednesday next week.  Most of the ensembles are dry with just passing clouds with some showing light snowfall.  Right now, the forecast is only calling for flurries overnight Tuesday and into Wednesday.

The longer-range guidance can be best described as volatile as the ensembles are all over the place for each model suite. I said there could be a surprise forecast in the last post, and that statement still stands as the longer range forecast is mostly guess-work right now, even more than normal.

The ECM model has become increasing wet over the past two runs and the operational model is now moving a couple of weather systems under a British Columbia ridge into CA toward the end of next week (image below) and over the following weekend (two images below) with the second system combining with a retrograding polar jet stream moving out of Canada. It has almost two feet for Mammoth next week and through the following weekend.

The Canadian model has a deep trough along the West Coast, but doesn’t have the weather systems moving into CA off the Pacific like the ECM does and only shows light precipitation (image below).

The 12Z GFS did not have the pattern either, but the 18Z run is now showing a system (image below) barreling eastward into CA under the BC ridge in robust zonal flow that would be a decent snowmaker.  It also has the Wednesday system stronger with about an inch of liquid for Mammoth.

However, the GFS ensemble mean (image below) is not favoring these solutions yet as it has the southern piece of the West Coast ridge in addition to the BC part stronger and keeps the long-wave trough well east of CA.  It is only showing light precipitation at this time and less than half an inch (image below).

The ECM mean is wetter and has about an inch of liquid for Mammoth.  However, there are still a fair number of ensemble solutions that are not showing much and also a few that are very wet.  Hence the volatility of the numerical guidance right now in the extended time range.  Current forecast is conservative for next week until the guidance becomes better aligned, but does show some snowfall during the forecast period.

The GFS ensemble is showing a system possibly moving into CA far enough southward around the 18th (image below), but it is certainly not bullish about a deep trough that would result in significant snowfall.   It rebuilds the ridge afterward for more dry weather.

Overall, the GFS ensemble is showing about 1.5” liquid for the period (two images below), so there probably will be some snowfall at times, hopefully enough to make powder turns. The longer-range climate models are still basically dry into March, although I don’t trust any of the longer range guidance right now. Hopefully some clarity by the next update. WG