Wed 2/24 through Sat 2/27 – No snowfall expected all days except for a chance for light snow snowfall Saturday evening and overnight-maybe a couple inches accumulation by Sunday AM.

The visible satellite image (below) this afternoon shows some passing high cloudiness over the southern Sierra, otherwise it is a mostly clear winter day with seasonable temperatures in the upper 20s to upper 40s. 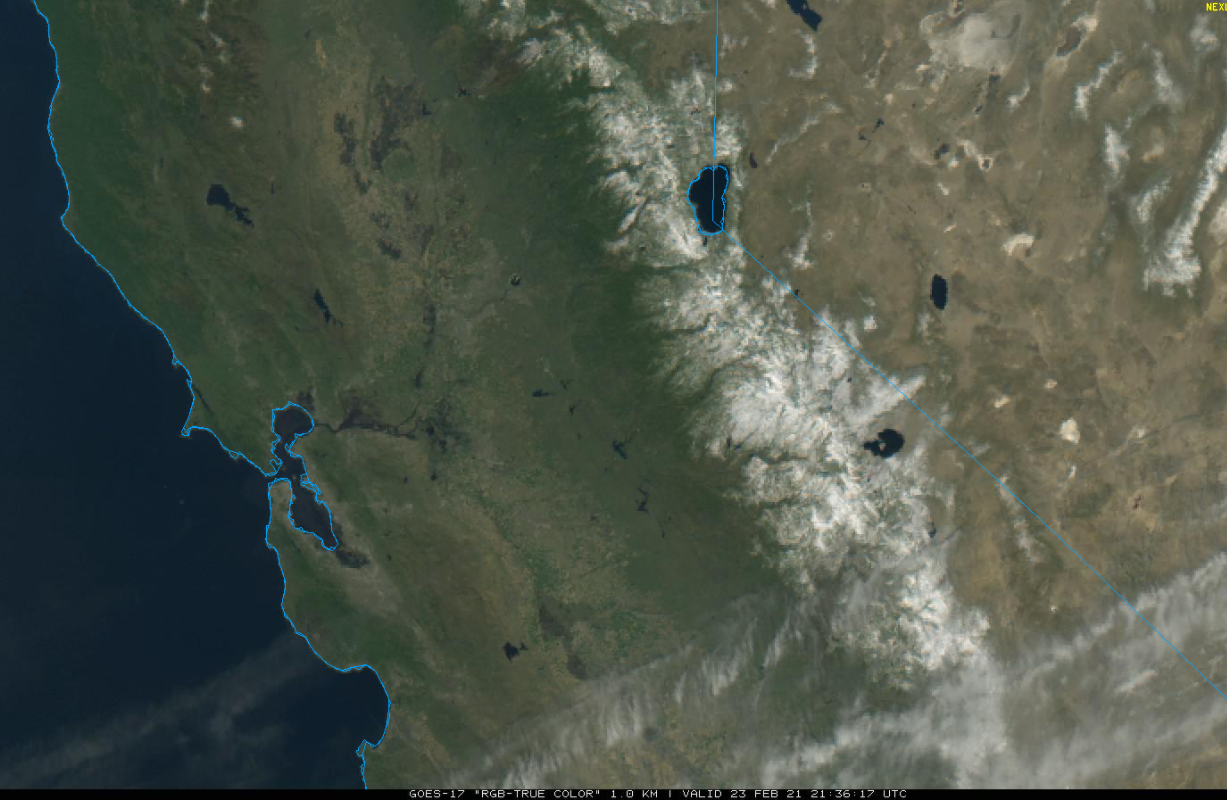 The upper-level pattern for the next 4-5 days will consist of a high pressure ridge positioned off the West Coast and storm systems riding over the ridge and then moving southeastward into a trough centered over the inter-mountain West (image below).

These are inside slider type systems that typically don’t produce meaningful snowfall and usually result in just colder temperatures and periods of breezy/gusty northeast winds.  It does appear that the system for Saturday night and Sunday may produce some light snowfall, but not enough for powder conditions and more likely dust on crust conditions.

The longer-range guidance is still suggesting that the long-wave trough centered over the inter-mountain West this week will retrograde westward starting next week and through early March.  However, there are still big question marks about how the pattern will evolve.

The latest ECM model is the least favorable for that transition and delays any snowfall until the end of the first week of March.  It has a short-wave trough as another inside slider on next Monday/Tuesday well east of Mammoth (image below) and is much slower with the evolution of the long-wave trough along the West Coast for the end of next week as it still has it offshore at the end of the period (two images below).

That pattern would result in some light snowfall early next week as the model is only showing light amounts of precipitation (image below) followed by a better chance for meaningful snowfall toward the end of next week (two images below) that would likely be enough for powder conditions.

The fantasy range guidance from the GFS ensemble does keep the long-wave trough mostly in place along the West Coast for the rest of the forecast period (image below).  That would allow for storm systems of varying intensity to move ashore into CA every couple/few days if it verified. The precipitation forecast for the period (two images below) certainly is not huge as the ensembles are not yet bullish on significant snowfall, yet.

Overall, there is a slight chance that a potential storm early next week could produce enough snowfall for powder conditions with the next best chance for a powder day around the end of next week.  That will be followed by additional powder day chances into the following week—dates yet to be determined.  WG

2-14-22 at 8:11 AM – Recreational Weather Report for Mammoth Mountain & the Eastern Sierra