Thu 3/18 – Dry during the day with increasing winds, then light snowfall develops during the late afternoon and increases overnight.  Accumulations 4 – 6” by Friday AM, 6”+ up top

Sat 3/20 – No snowfall expected other than a chance for an afternoon snow shower.

The visible satellite image (below) this afternoon shows mostly clear skies over the Sierra and clear enough to actually see Mammoth mountain in the image.  Fair weather will continue tomorrow with increasing west winds during the afternoon that could lead to wind buff up top. 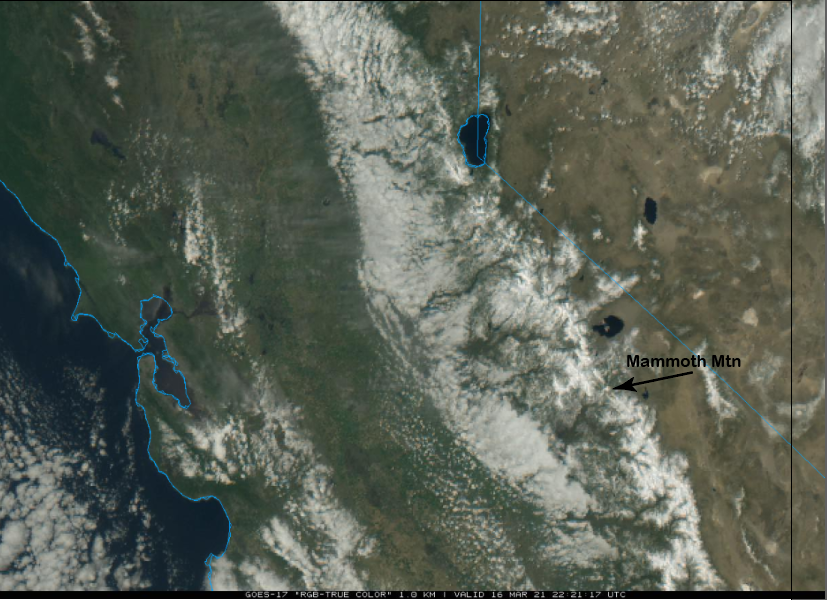 Thursday will be dry for most of operations with increasing southwest winds that should result in better wind buff up top.  Clouds will also increase during the day and light snowfall is expected to start during the day afternoon hours before increasing overnight.

The models are in agreement (GFS below) that an upper level trough will move through the state on Friday before exiting eastward Saturday. Snowfall should continue Friday before decreasing Friday night and tapering off by dawn Saturday, although the ECM model is slightly slower with the timing.

Liquid amounts with the storm are expected to be around an inch with the GFS (image below) the wetter model and the Canadian the driest at about half an inch.  The ECM has just under an inch total.

Snow levels will start out around 7000 feet with the bulk of the snowfall occurring with snow levels around 5500 feet before levels lower to near 4500 feet by Saturday morning. So this snowfall won’t be a cold/dry/fluffy as the previous two storms and will be more typical for Mammoth.

Overall, it looks like riders of the storm conditions Friday followed by a powder day Saturday. Saturday should be mostly dry except for a chance for an afternoon instability snow shower.

The longer-range guidance is showing the chance for another storm to move through around Monday next week, otherwise it looks like dry weather will return for most of the extended period.

The ECM model moves the trough southward into CA (image below) with enough over-water trajectory for some light snowfall in Mammoth Monday night.  The Canadian is similar while the GFS has if farther eastward as an inside slider.

Current forecast is only favoring a chance for light snowfall and likely not enough for powder conditions.  However, it is still six days out and the forecast can change.

Hopefully it will because it looks like an upper level ridge will dominate the weather pattern for CA and Mammoth next week and may hold until the end of the month.  That is when the GFS ensemble suggests the next chance for snowfall will be if the jet stream (image below) slips south of a BC ridge.  Otherwise, it is looking like spring in the extended time frame. WG