Sat 4/10 through Tue 4/13 – No snowfall expected all days except for a chance for light snowfall Tuesday late afternoon and night.

The visible satellite image (below) this afternoon shows mostly clear skies across CA and the winter snowpack in the Sierra. Continued fair and slightly warmer weather is expected tomorrow. 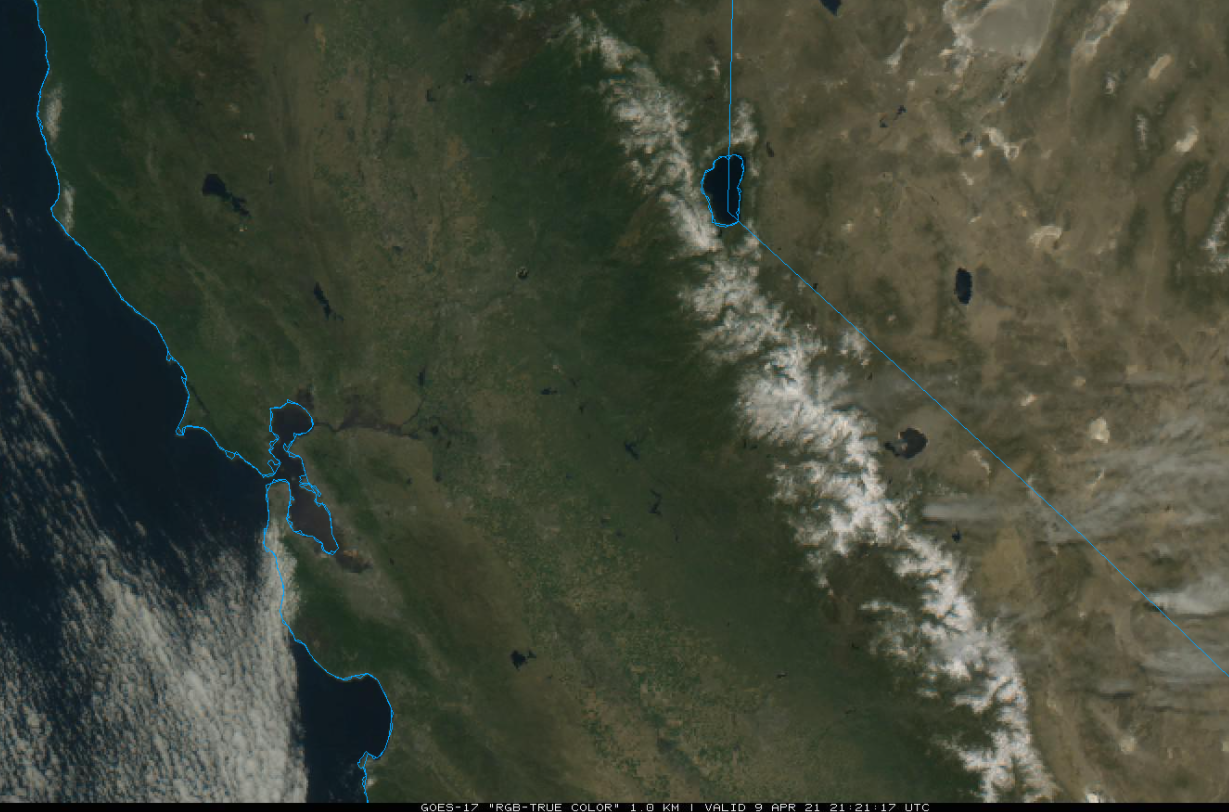 The models move a short wave east of CA early Sunday (image below) and it won’t have much of an effect on the weather with continued spring conditions on most of the mountain.  Monday should be little changed with cooler weather Tuesday and gusty southwest winds increasing during the day that could lead to wind holds during the afternoon.

The longer-range guidance has increased the chances slightly for some snowfall around the middle part of next week with a continued chance through the weekend, although the models are not bullish on heavy amounts or even enough for powder conditions.

The ECM and other models move an upper level low into CA from the interior West in a funky retrograding jet stream flow back into CA (image below).  It has just enough dynamics to squeeze out some snowfall.  Some of the previous runs showed more precipitation.

The ECM moves that low eastward out of CA around next Friday, but quickly moves another low into CA from the northeast over the following weekend (image below).  It generates some light snowfall again with that low, but nothing significant.

Latest model QPF varies between the models with the ECM and GFS models (image below) only showing light amounts for the period while the Canadian model shows enough for low-end powder conditions (two images below),  The GFS ensemble mean (3 images below) and the ECM mean are similar with about quarter to one-third inch amounts of liquid or a few inches of snowfall spread out over a few days.

Overall, the exact trajectory, strength, and position of the low-pressure systems for next week is still uncertain.  Odds are still not favoring powder conditions for the closing week/weekend of Canyon/Chair 22, but it is a week out, and a few ensembles are showing amounts that would equate to powder. Wait and see.

For the following week, the GFS ensemble keeps a trough off the West Coast and the ridge of high pressure just east of CA (image below).  That solution would allow some weak systems to move into NorCal and the PacNW, but unlikely to move far enough southward for any snowfall in Mammoth.  Spring has sprung.  WG