Tue 4/20 – Dry during the morning, then a chance for light snow showers during the afternoon and night.  No significant accumulation expected.

The visible satellite image (below) this afternoon shows clear skies over the San Joaquin Valley, but clouds building over the Sierra where afternoon instability showers are about to occur.  Decent chance for thundersnow through this evening.  The snow showers will end this evening, and no more than an inch accumulation is expected. 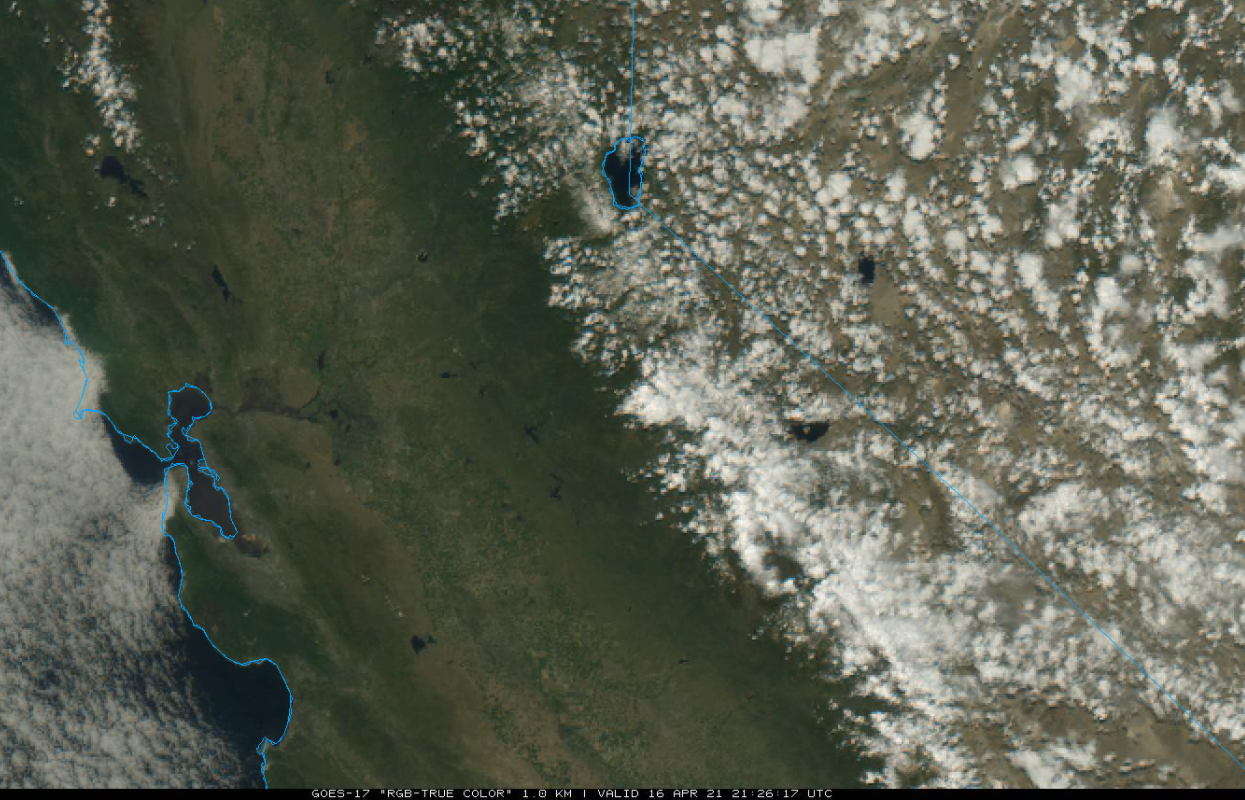 High pressure will begin to build into the Mammoth region tomorrow and will hold through Monday (image below) when it will peak in strength over the Sierra.  Spring conditions will return to most of the mountain over the weekend and possibly the entire top too on Monday.  Slightly cooler weather returns Tuesday including increasing winds and a chance for light snow/rain showers by the afternoon or night.

The longer-range guidance is showing a fairly typical spring pattern.

The models want to move a weak upper low southward into CA around the middle part of next week (image below).  The Canadian is quite similar to the ECM and the GFS is not too different either.  The guidance has another weak one moving into CA or just east around Thursday or Friday next week.  Only light snow showers are expected with either system and no more accumulation than an inch or two.

The models are then suggesting there will be a pattern change over the following weekend with a more pronounced trough and jet stream moving into the West Coast. Unfortunately, the guidance suggests it will move north of Mammoth (image below) with the precipitation remaining mostly over NorCal and the PacNW.

Overall, the models are not showing significant precipitation over the next 10 days and amounts mostly in the quarter inch range (images below).  So it looks like just a couple opportunities for light snowfall next week and following weekend, but not enough for powder conditions.

The fantasy range guidance does develop a zonal jet into the West Coast (image below) with the focus again north of Mammoth.  It keeps that pattern ongoing in a weakened form through the end of the month.

The GFS ensemble is showing about an inch of liquid for the forecast period and that suggests that many ensemble members have a storm or two far enough southward for snowfall in Mammoth.   If there is going to be a late season surprise, it looks like the last week of April is when it will happen.  WG