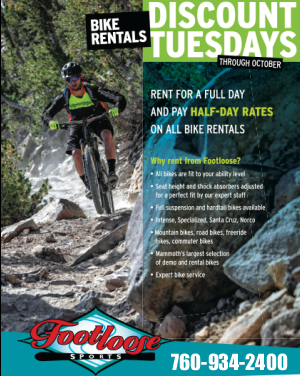 May 3rd, Monday @ 1:28 PM Good afternoon from Mammoth Mountain and the Eastern Sierra, we have clear blue skies at this time.

Checking in on the weather forecast the clear blue skies now look to be with us for the next 7-10 days. Highs over the next couple of days will be coming up and then will come back down again into the weekend.

At the Main Lodge highs should be in the low to mid 50s today and then up to near 60 for Tuesday and Wednesday. Over night lows will be into the mid 20s tonight than upper 20s for Monday night and then mid to upper 30s the rest of the week.

For Mammoth Lakes highs will be into the low 70s by mid week with Bishop in the upper 80s to low 90s, with cooler highs by the end of the week.

If you’re coming to the area make plans to ski and ride early, grab some lunch and then take a second afternoon adventure. It’s a great time of year to take a walk, bike, fish or maybe go for a nice scenic drive up and through the June Lake Loop and back.

Mammoth Mountain Snow Report: 5-3-2021 There was a freeze last night so the snow has had a chance to harden and freeze solid and now get soft and wet again. That freeze will help in the process of getting back to full on corn snow from top to bottom.

I will have a report from the hill right after skiing is done on Tuesday and will post that information up here before 5pm.

If you’re out on the hill this week look for me in my white snowman hat, I have a pocket full of the mammoth snowman stickers to give out.

5-1-21 Report: What I found on Friday was the faces of 3 and 5 along with the top had snow that was trying to convert over to full on spring.  The turns I took up top on Cornice Bowl were still a ton of fun, but will be a ton better once that snow surface corns up.

The rest of the open runs had a mix of some wet slush that got slow by mid day, areas that had corned up stayed fast and fun until Snowman departed.

What we need now is a solid freeze thaw cycle. The next night that it looks like we get a full freeze will be Sunday with mid 30s at night tonight and most of next week. We will see how that effects the snow surface and report back what we find early next week.

If you’re going to be out on the hill the next few weeks you need to wax daily or your going to stick badly in the spring snow. Unless you like hard snow I would avoid the 7:30 start, for those who like it fast and firm have at it. For those who like the snow soft a 8:30 to 9 AM start is going to be best this week.

Grooming continues like normal out of Main Lodge with both Scotties and Cornice up top getting groomed nightly. All the lower runs are groomed out nightly and when it warms up they turn into a nice soft buttery surface.

The Unbound Parks are still fully built out and will be good to go for at least a couple more weeks if not longer. I will get some fresh photos and video of what’s set up next time I am on the hill.

Out on the runs I would say there is a good 2-6 feet from Main Lodge to the Top, just enough to make it through the month of May. Also to note we are just starting to see obstacle’s melt out off the runs on the lower part of the hill that’s currently open.

— Have you purchased your Ikon Pass Yet? If you’re getting a new one they will be good starting NOW, here is the link to get your pass.**

Mountain Biking Report 5-3-21: All trails and roads below 8500 feet are now ridable over the entire Eastern Sierra.

In the Mammoth Lakes area there is some great riding out of Shady Rest, try the Knolls Loop or the Sawmill Road out to 395 and back or ride on to Lookout Mountain. Checking in on the Uptown and Downtown trails you can ride a loop from the Village up to the ski area garage and back down again.

Mammoth Rock Trail still looked to have snow in the higher sections with the rest of the trail melted out, I hope to get a good look at that area on Monday and will report back. Expect the snow line to come up so you can ride up to Panorama Dome any day now.

I like mixing in the dirt with the paved trail system here in Mammoth Lakes, as of now all those paths are melted out, cleaned up and rideable below Twin Lakes in the Mammoth Lakes Basin.

Out on the Scenic Loop Road the Inyo Craters Area is ready to ride with all the snow melted out now. This is a good time to ride these trails / roads before it dries out and becomes more sandy later in the summer.

Just south of Mammoth try out Lower Rock Creek Canyon as its a blast right now, but do watch for uphill riders and hikers / dogs on the trail. Please beware that starting May 4th they are doing a controlled burn near this trail so you will want to avoid this trail until the following weekend.

The Mammoth Mountain Bike Park is set to open Friday May 28th, expect crews to be out soon clearing snow and getting the trails below Main Lodge ready to go.

Check out my mountain bike report page for a list of trails that are now open in the Eastern Sierra for you to ride.

**The Footloose Bike Shop is OPEN… They are offering Bike Rentals and Sales now along with a complete Service and Repair shop that opens on Friday. They have everything you need to start mountain biking in the Eastern Sierra.

Some good times ahead… Snowman

PS: Important…Please consider partnering with us because You love seeing my posts, reports and photos/videos of the area. Here is the link to learn more.