Sat 5/15 – Likely dry during operations, then a chance for showers/thunderstorms during the late afternoon and snow during the evening/night. Accumulations 0 – 2”

The visible satellite image (below) this afternoon shows mostly clear skies over California including the dwindling snowpack of the Sierra where there are also some afternoon clouds. 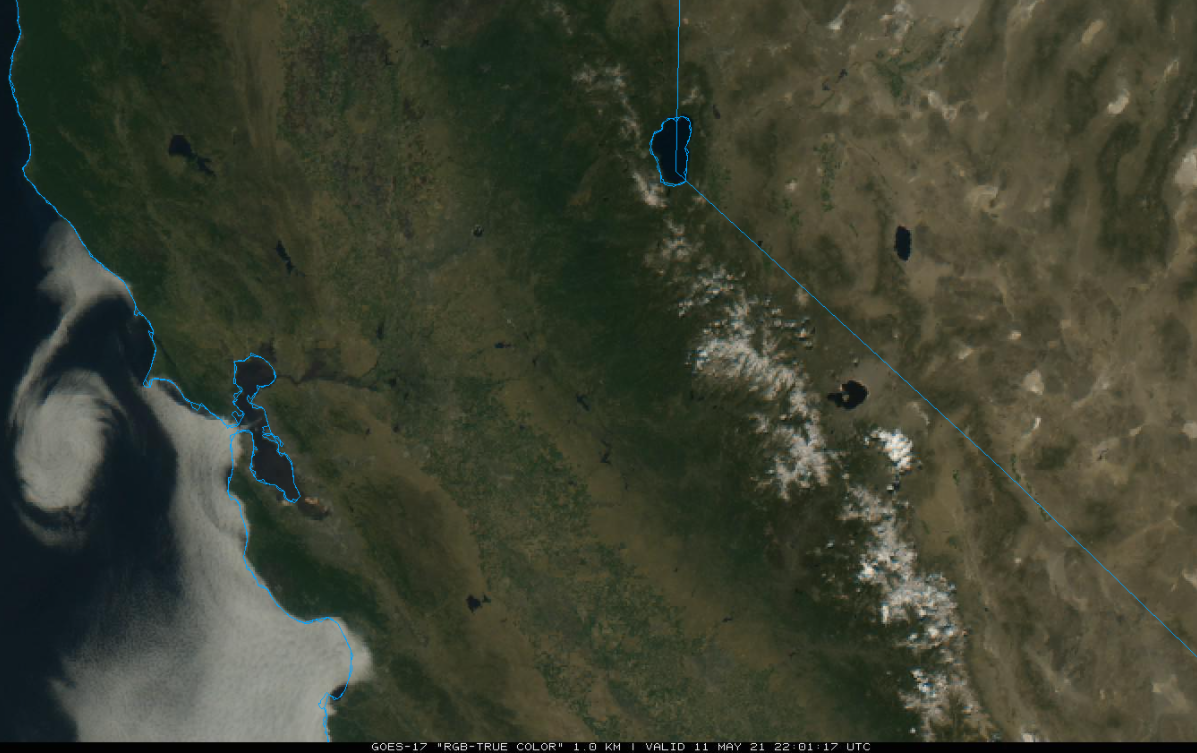 Weak high pressure (image below) will continue to hold over CA through Friday for fair weather and spring conditions.

An upper level trough will then break off from the jet stream and move into CA on Saturday (image below) resulting in cooler weather, breezy winds, and also a chance for rain/snow.  The ECM model is by far the most bullish with the GFS and Canadian models weaker, farther east, and somewhat drier.

The ECM has about a quarter inch of liquid with the storm and a couple inches of snowfall.  It looks like if it does happen, it will start as rain or thunderstorms before changing over to snow during the evening/night.  Snow levels will start out around 10K before lowering to 8.5K by evening per the ECM, if it is right. Overall, it will likely be dust on crust event if it occurs.

The longer-range guidance is generally showing a typical spring pattern with no clear signs of any very late-season powder days.

Lingering moisture will result in continued late afternoon or evening showers and thunderstorms Sunday through Tuesday with freezing/snow levels above 10-11000 feet.  Although the top may firm up, the lower runs will likely be typical spring conditions.

The ECM model does move a trough north of Mammoth around Tuesday next week (image below) that could result in increased winds and cooler temperatures.  A few of the ensembles are farther southward with the weather system and have some snowfall, but the vast majority are dry for Mammoth.

The longer range GFS ensemble keeps a long-wave trough in place along the West Coast (image below) through the end of next week.  That would limit warming for Mammoth and also produce breezy winds at times under continued dry conditions as the jet stream is too far northward for any snowfall under that projection.

A similar pattern is favored for the fantasy period (image below) with the long-wave trough just a bit father northward into the PacNW.  That would result in typical spring weather and no significant heat waves to quickly melt off what is left of the dwindling snowpack.

Overall, the GFS ensemble mean is showing small amounts of precipitation at times over the 15 day period (image below), but nothing that would support powder conditions. Next update Tuesday 5/18 unless the forecast for this weekend changes dramatically. WG