Wed 5/19 and Thu 5/20 – No snowfall expected both days except for a chance for light snow late Thursday night.  Accumulations less than an inch.

Fri 5/21 – Snow showers will likely develop by late morning and continue during the day, possibly briefly heavy during the afternoon, ending evening. Accumulations 2 – 3” by Saturday AM and 3”+ up top

Sat 5/22 – Likely dry during the morning, then snow showers are probable during the afternoon and early evening, ending around dusk. Accumulations 0 – 2”.

The visible satellite image (below) this afternoon shows clear skies over California including the dwindling snowpack across the Sierra. 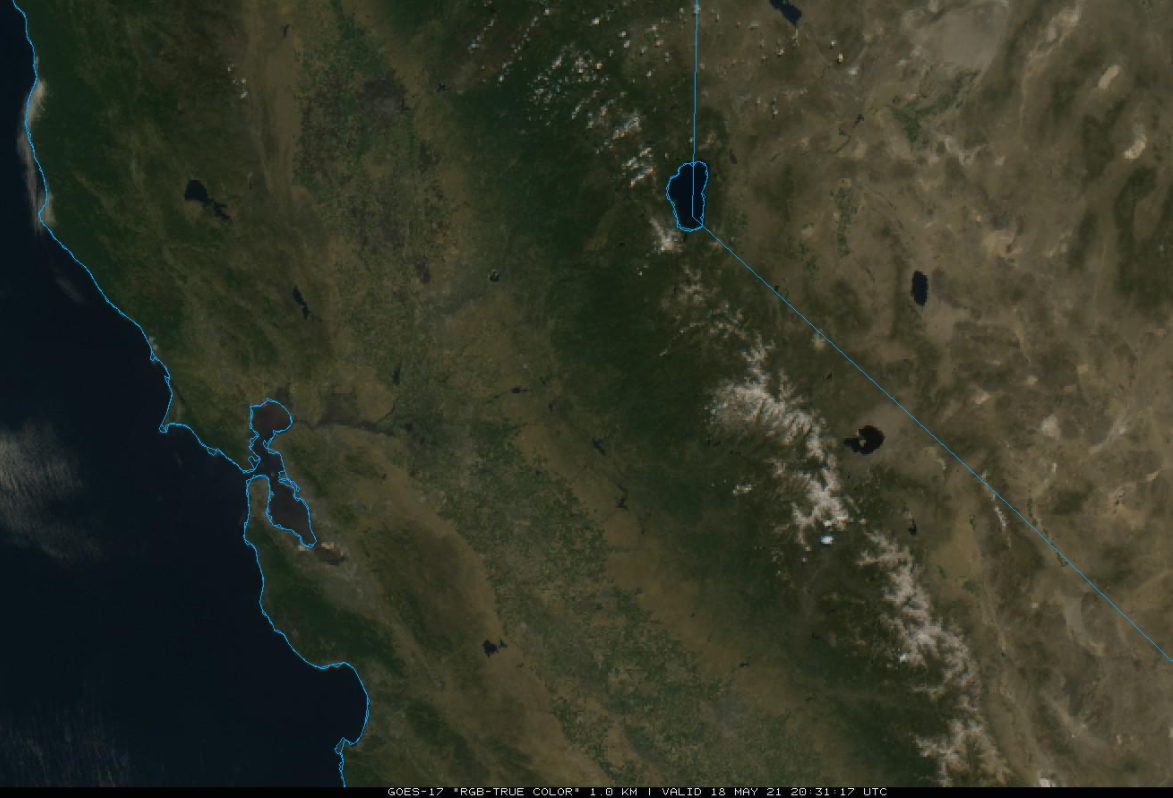 High pressure will break down tomorrow ahead of an advancing upper-level trough that is forecast to move into CA on Thursday and Friday (image below).  That system will usher into Mammoth a much colder air mass along with snow showers.  It is a guarantee that the runs will firm up Thursday as freezing levels will drop to around 5000 feet by early Friday.  Temps on Friday will likely remain in the teens to 20s on the mountain.

The system will stall over eastern CA through Saturday (image below) for continued unseasonably cold weather through the weekend with temperatures likely remaining below freezing during operations, although it will warm up a bit on Sunday just before 2 PM closing.

The models are also projecting snowfall on both Friday and Saturday with Friday likely being the more active day.  Snow showers will start during the morning or midday hours before ending during the evening with the heaviest snow showers during the afternoon, primarily Friday.  There could be showers Sunday PM too, but freezing levels will near 9-10K that day

Overall, it does appear that at least a few inches of snow will fall over those two days that would result in low-end powder conditions under normal circumstances.  However, most of the snowpack has melted out away from the groomed runs and this snowfall will cover a lot of exposed dirt.  I would not recommend venturing off the main trails for the expected freshies.

The longer-range guidance is generally showing a typical spring pattern for the last week of operations.

That trough is forecast to remain mostly in place for most of next week and that will result in fair/dry weather and generally seasonable temperatures on the mountain.  Spring conditions should return Monday and last all of next week.

The longer-range guidance builds a stronger high-pressure ridge across the Western Interior (image below) over the last weekend of operations and a baggy trough along the coast.  Temperatures should warm up for Memorial Day for perfect spring conditions.

This will be the last update for the season.  Next update November 2021.  I hope you had a great season.  WG