Sat 11/20 through Tue 11/23 – No snowfall expected all days except for a chance of light snowfall Tuesday afternoon and night.

The current infrared satellite image (below) shows a weak weather system that produced some light showers in NorCal now exiting the state.  High pressure off the coast will build into the region tomorrow.

Models build the ridge into the state through Sunday (image below) and fair/dry weather will continue into early next week.  Temps will remain seasonable tomorrow before warming up a bit Sunday and Monday with probably some night-time snowmaking possible.

The guidance differs in solutions by Tuesday next week with the ECM (image below) and Canadian models splitting and moving the next approaching short-wave trough through CA as an inside slider type system.  That solution is dry with just colder temperatures and increased winds.

The GFS is different (image below) and moves the short wave through CA from northwest to southeast without splitting the trough. That solution would produce light to moderate snowfall Tuesday afternoon and night.

The model produces about 5-6” of snowfall (image below) and enough for powder conditions. However, the GFS ensemble is not fully supportive of the deterministic run and only has about 0.15”-0.20” of liquid (two images below) that translates to only a couple inches of snowfall by Wednesday morning.

Current forecast supports only a chance for light snowfall Tuesday PM and night with also a good chance for continued dry conditions as only 4 of 50+ ECM ensembles show the GFS solution.  Regardless, it should get colder for better snowmaking opportunities.

The longer-range guidance is still looking dry in the ten day range, but hope remains in the fantasy 11-15 day period and also the 15-30 day super fantasy period.

After the passage of the trough around Tuesday/Wednesday, models favor rebuilding the high-pressure ridge through Thanksgiving (image below) with the ECM model holding the ridge in place through the holiday weekend and into the next week (two images below).

The GFS has backed off from the last post showing a big storm around the end of the month with the ensemble mean now showing a weaker trough moving into central and northern CA at the end of the month (image below). While that could produce some snowfall, confidence is low, as both the ECM and Canadian ensembles are not showing a trough and keep the ridge in place.

The GFS ensemble then moves a deeper trough into CA at the very end of the period (image below) that would be strong enough for substantial snowfall.  The mean precipitation forecast is showing over 2” liquid (two images below).  However, again, both the ECM and Canadian ensembles don’t favor a deep trough and keep the jet farther northward into the PacNW.

But the ECM super fantasy forecast does hold hope for a pattern change by the end of the first week of December.  That model produces a favorable storm pattern that lasts through the third week of December with continued storms at times into 2022.

The likely reason why that model is forecasting a good storm pattern by the end of the first week of December is likely tied to an increase in amplitude of the MJO signal over the western Pacific or phase 7 (image below) on the RMM plot. 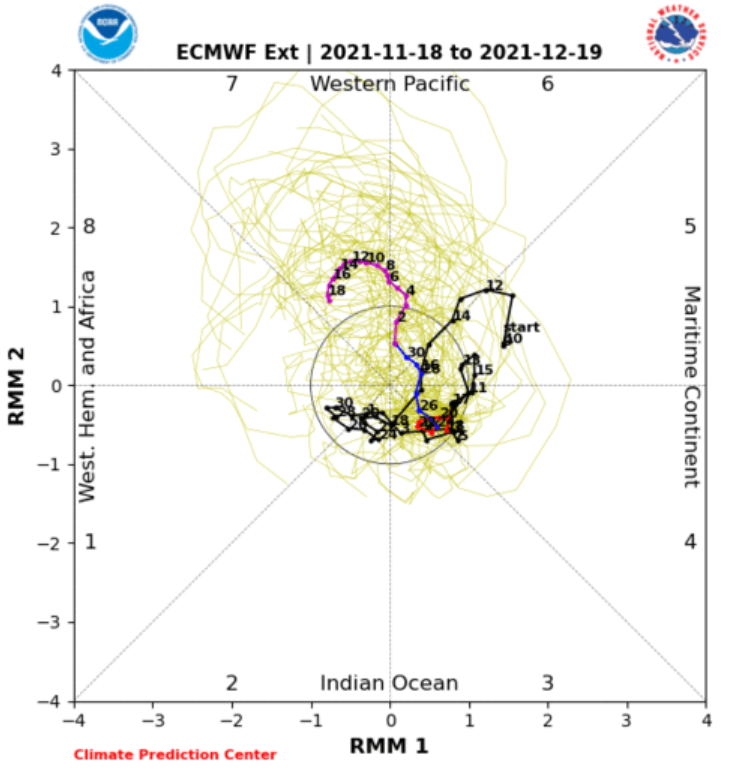 A look at the MJO precipitation analog chart (image below) shows above normal precipitation for Mammoth when the MJO is in phase 7 during the 2nd and especially 3rd weeks of December (red circle) as projected by the ECM model above.  Major storm patterns induced by the MJO is a regular occurrence during CA winters. 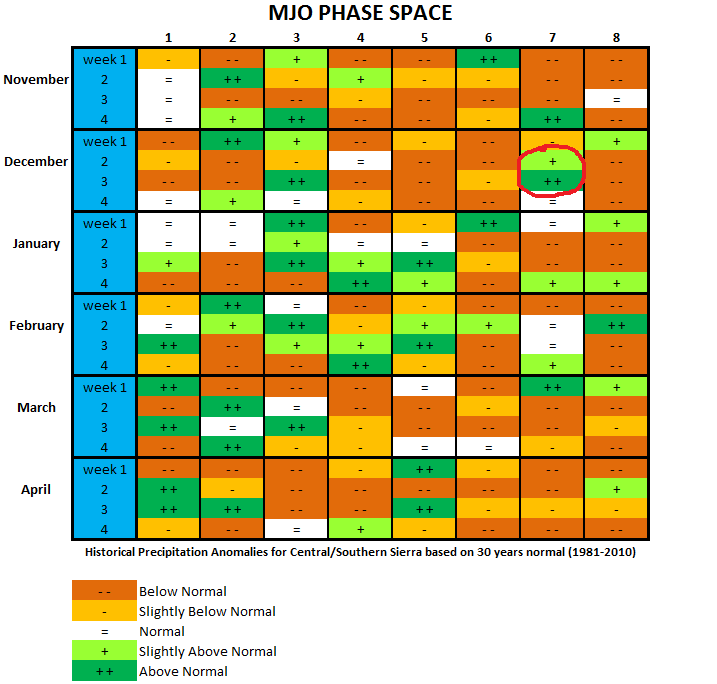 One thing I learned at the American Meteorological Conference this past January was a talk about the relationship between the MJO (a area of enhanced convection along the equator that circles the globe in a mostly eastward direction) and the Quasi-Biennial Oscillation (QBO) (an equatorial zonal wind in the tropical stratosphere that oscillates between easterlies and westerlies phases with a mean period of 28 to 29 months).

The author stated (image below) that the MJO is more active, stronger, and predictable when the QBO is in its easterly (negative) phase and not westerly (positive).

The two phenomenon tend to work together as opposed to against each other when the stratospheric zonal wind is blowing in the same direction as the MJO is moving (and also changes the static stability in the upper troposphere—less stable in the easterly phase).  The QBO is currently increasing easterly after switching from westerly over the summer. 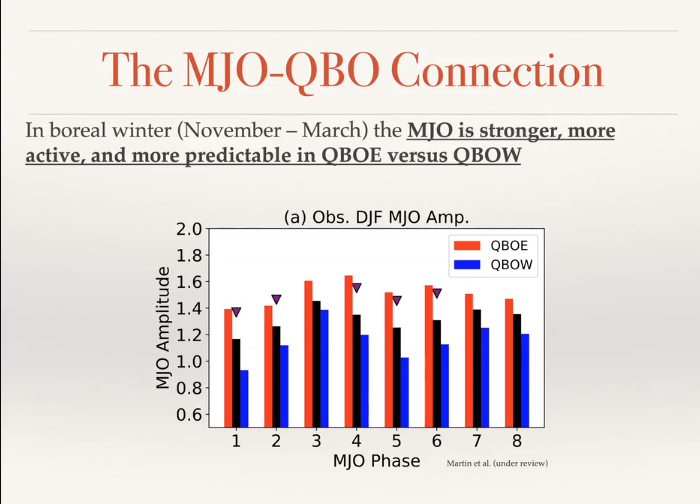 That said, this will be a good case to watch as the MJO generally is not well predicted beyond a week or two.  Can the ECM model predict the position and relative strength of the MJO 3-4 weeks out?  Let’s hope so cause that would mean lots of snowfall for the Sierra and Mammoth.