The current infrared satellite image (below) shows a weak weather system moving through the interior PacNW and a trailing front into California.

The system split and the leftover very weak area of low pressure off the CA coast will drift into SoCal later tonight and tomorrow with just clouds as it dissipates.

High pressure is then forecast to rebuild into CA on Thanksgiving (image below) and will hold through the Holiday weekend (two images below) for more fair and mild late November weather.  Snowmaking will be very limited after good opportunities tonight and again tomorrow night.

The longer-range guidance has shifted slower, so it is still looking dreary in the ten-day range, but hope remains in the fantasy 11-15 day period and also the 15-30 day super fantasy period.

The models are now in general agreement (ECM below) that the ridge of high pressure will mostly remain in place over CA through the end of next week and possibly into the following weekend.

That means continuing similar dry weather with a mild end of November and beginning of December temperatures.  Good thing Mammoth got that snow in October/early November or they would be hurting right now like the Tahoe resorts that are delaying their openings.

The GFS model has been flipping around a bit, but the latest 12Z run from today develops a very favorable snowfall pattern starting the second week of December (image below).

A deep trough-like that would produce feet of snowfall and the model is showing hefty liquid amounts of around 4” to support that statement (two images below).

The GFS ensemble though (image below), is not as bullish about such a deep trough extending southward into CA and only shows a weak to moderate strength trough.

Liquid precipitation amounts from that model (two images below) are about a third of the operational model and only about 1.5”, but still good for a foot of snowfall.  The ECM ensemble mean is also showing a weak/moderate trough extending into CA.

Overall, it looks like the teleconnection pattern switches over the first week of December as models are favoring the PNA index (Pacific/North America) to switch from positive to negative (image below).

However, as seen below, many ensemble members of both model suites keep the index positive.

As mentioned in the previous post, the MJO will likely be the wildcard if a strong event develops during December in Phase 7 that would destructively interfere with the ongoing La Nina.  That is still forecast by the latest long-range ECM model (image below). See the previous post for more details.

Both the ECM and CFS climate model six-week forecasts show precipitation increasing across CA during the second week of December and continuing for most of the rest of the month.

The latest series of runs of the CFS month model has been increasingly wet with the latest run showing above-normal precipitation for all of California next month (image below).  Fingers crossed. WG 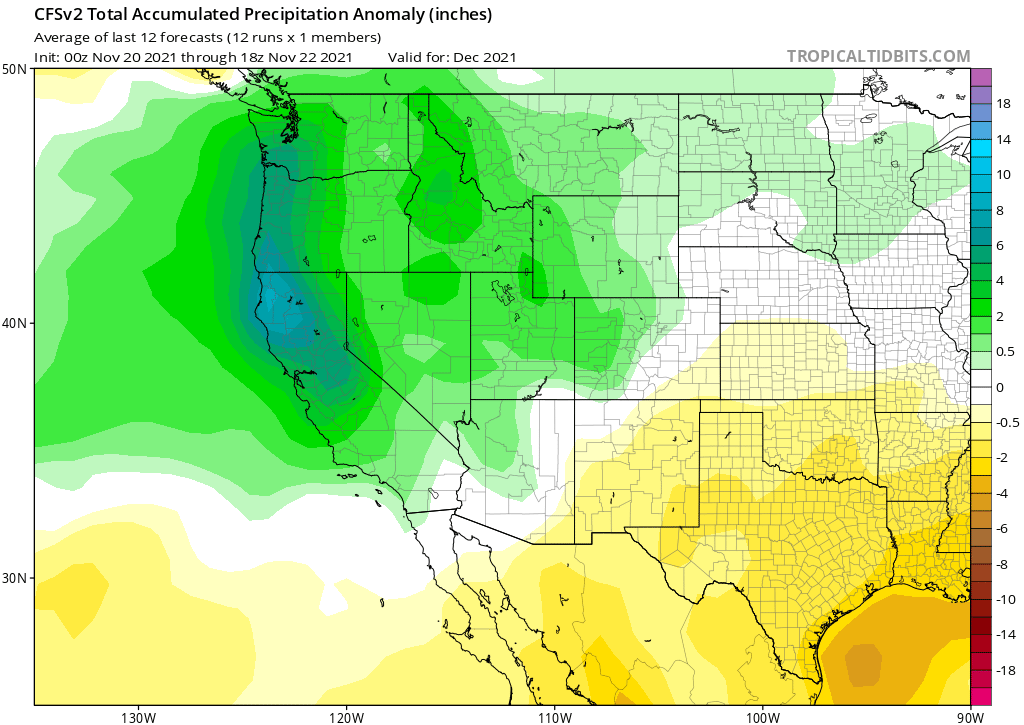