Wed 12/8 – Dry during the day and into the night, then winds increase and snowfall becomes likely late at night and may become heavy towards dawn.  Accumulation 3 –4” Main and up to 6” up top

Thu 12/9 – Snow, heavy at times during the morning, tapering off during the afternoon, ending evening. Accumulation 5 –7” Main and up to 9” up top

The current infrared satellite image (below) shows a couple weak weather systems across the southern part of the state that produced the clouds yesterday and light snow showers overnight.  The inland system will exit the state into Arizona tonight and the one off the coast will drift southward to a position of the Baja coast.

Meanwhile, weak high pressure over Mammoth will produce fair and seasonable weather tomorrow out ahead of a stronger weather system for Thursday (image below).  The models move this system from the Gulf of Alaska through Mammoth during the day and snow should start well before dawn and will probably be heavy at times during the morning hours.

The ECM model is showing about an inch liquid (image below) and the GFS is fairly similar (two images below), although it has more precipitation west of the Sierra crest. The end result should be 8-12 inches of snow at Main and over a foot up top.  Snow levels will start out at around 7000 feet before falling to 5500 feet by Thursday PM, so this will be typical Mammoth snowfall and not fluffy powder. 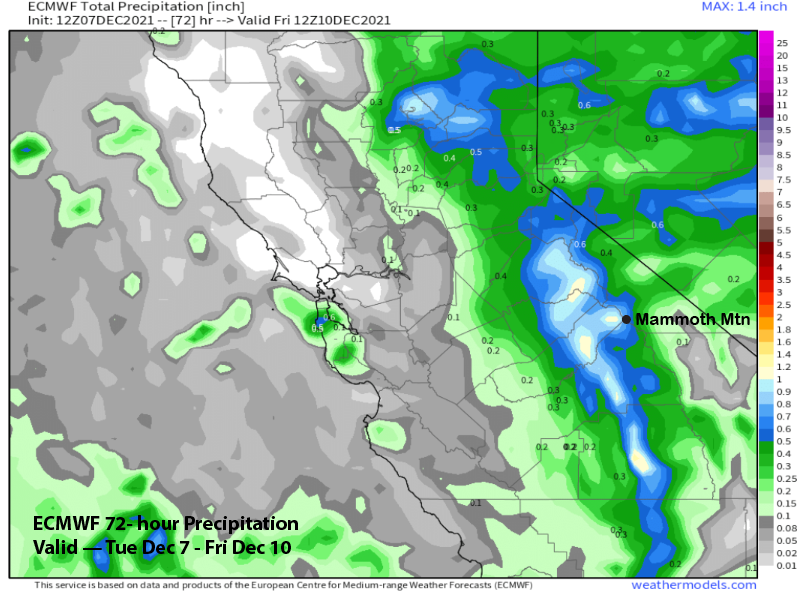 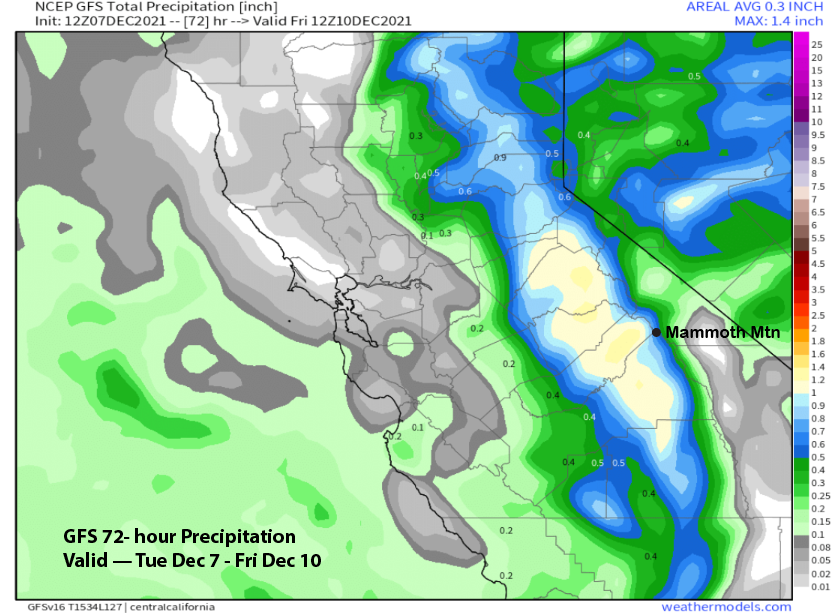 Dry and colder weather is forecast for Friday with continued dry weather Saturday under slightly warmer temperatures, but still seasonably cold with temps likely remaining in the 20s and 30s on the mountain. Conditions should be much improved.

The longer-range guidance has now trended in our favor with the first big snowstorm of the 2021-2022 season expected early next week, just in time for the expected opening of Canyon and Eagle.

The morning run of the ECM model is now in alignment with the other models and shows a very deep upper-level trough developing along the West Coast Sunday (image below) and extending southward through CA by Tuesday (two images below).

It drives a strong polar jet stream (blue arrow) through central and northern CA resulting in good orographic enhancement over the Sierra of a slow-moving copious precipitable water plume resulting in heavy snowfall.

It is still about 5-6 days out and details will likely change as we get closer in time, but all the EC ensembles are suggesting a good snowfall event will start as early as Sunday and last through Tuesday or longer. Models move another system into CA toward the end of next week (image below).

Overall, the deterministic models are showing some large amounts with their QPFs (Quantitative Precipitation Forecast) with the ECM model (image below) showing about 7” liquid in the 10-day range and the GFS (two images below) over 8” with 10” over the Sierra crest west of Mammoth. 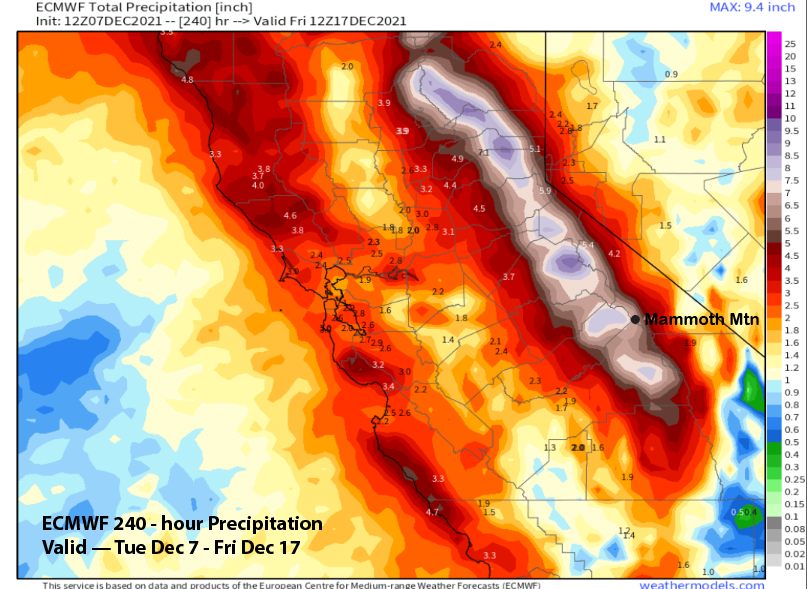 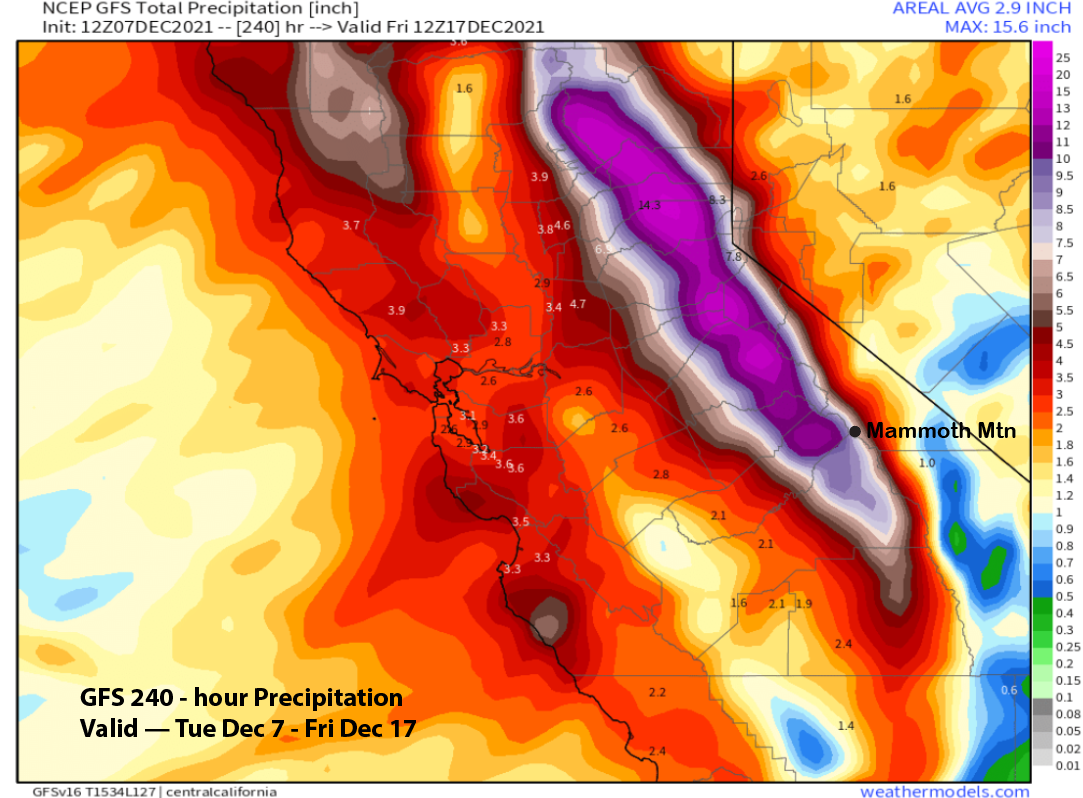 That would equate to many many feet of snowfall as models keep snow levels well below town levels.  Hopefully, the details with this upcoming event can be sorted out with the Friday update as there still is a decent spread within the ensembles about the exact strength of the potential storm with the ensemble mean showing about 2” less liquid than the deterministic models shown above.

There may be a brief break after this set of storms, but the fantasy range guidance keeps an active storm track into CA into Christmas week.  Both the ECM (image below) and GFS (two images below) ensemble means to depict a very similar pattern across North America with a ridge across the SouthEast and a trough along the West Coast with the ECM only slightly deeper.

So an active pattern may continue Christmas week with the suggestion right now that it would be colder-type storms.  It is way out, so that could change.  Regardless, the ECM mean for the entire period (image below) and the GFS mean as well (two images below) are both showing hefty amounts for the total period and likely excellent conditions by Christmas. 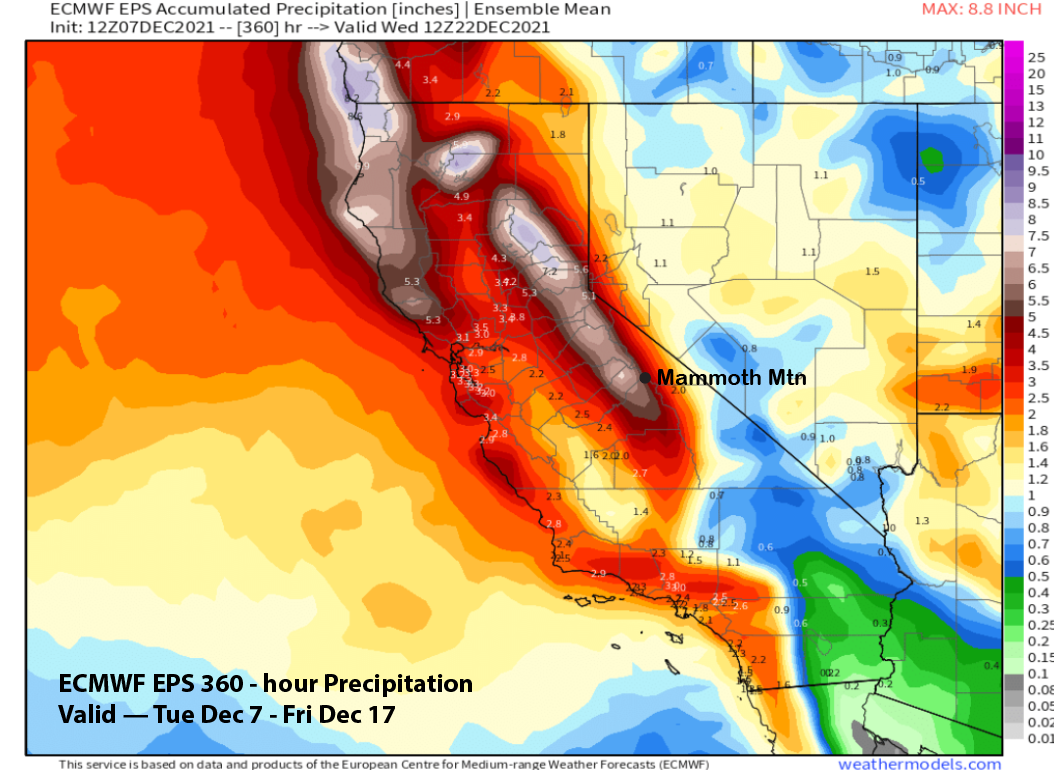 The longer-range ECM climate model keeps the active pattern going through the end of the month and into early January with no clear signals of a sustained dry period in the six-week forecast.  As we have learned, CA weather is feast or famine. Maybe it is feast time now.  WG