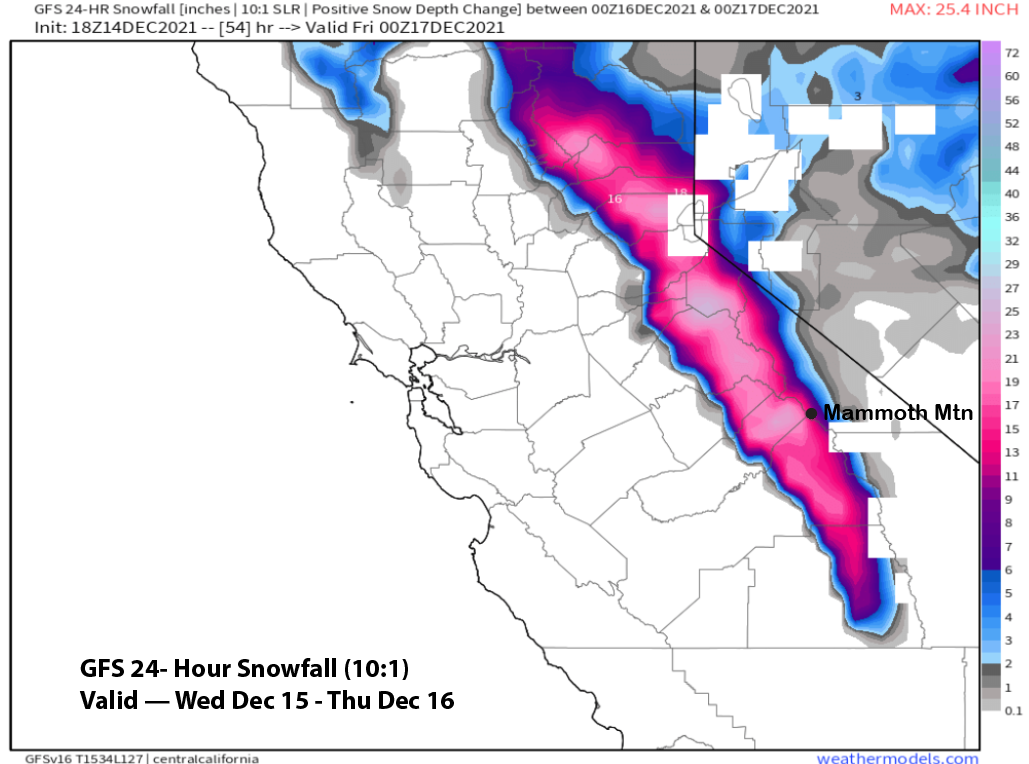 Wed 12/15 – Dry during the day, then snow and gusty winds increase at night, with snow becoming heavy after midnight for a bit.  Accumulations for Thursday AM  9 –11” Main, 12”+ up top.

The current infrared satellite image (below) shows the potent storm system that produced all the snowfall moving into SoCal with the front having moved through Mammoth earlier today and now some wrap-around flow keeping the snowfall ongoing.  It will end early this evening followed by a clear and cold night and bluebird morning tomorrow.

Models move the next upper-level low into the Sierra tomorrow night and early Thursday (image below) for another round of moderate to heavy snowfall.  Winds will increase and become strong overnight with gusts over 100 mph likely up top.  Snowfall will also become heavy for a bit after midnight and before dawn.

Since the last update, the numerical guidance has increased the precipitation forecast with both the ECM (image below) and GFS (two images below) forecasting at least an inch or slightly more.  That should equate to about a foot at Main and slightly more up top and about 9” at Canyon. Most of the snow will fall by the time the lifts open Thursday with only light snowfall during the morning, ending during the afternoon.  If they don’t open the top, then both Thursday and Friday could be powder days. 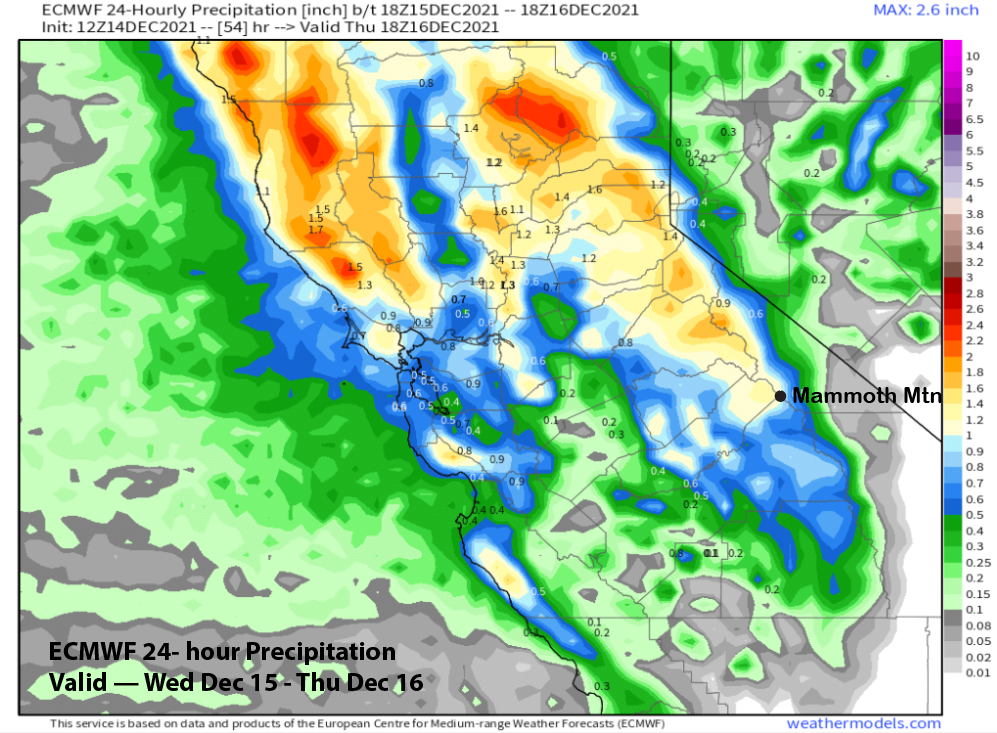 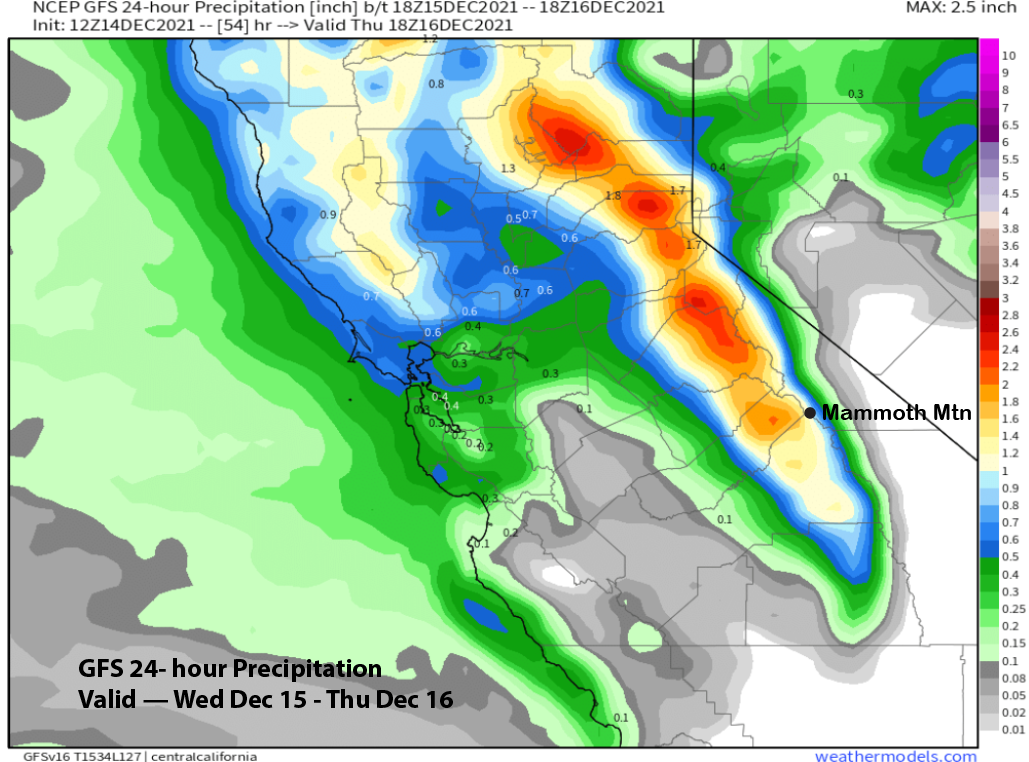 Dry weather is forecast for Friday and Saturday with seasonable cold temperatures and light winds.  Conditions should be fantastic on the mountain.

The longer-range guidance is still showing a continued favorable pattern for the next couple of weeks or longer.

Dry weather should continue through the weekend, even though the models are now moving a storm into NorCal on Sunday (image below) after previously forecasting dry weather.

There is still a lot of uncertainty with the details for the pattern next week. The ECM model develops a rather deep upper-level low off the coast early next week (image below) that pulls in abundant Pacific moisture before moving ashore around the middle part of the week (two images below).  The Canadian and GFS models are similar, but slightly are slightly closer to the coast with the upper low that would allow the precipitation to move into Mammoth earlier.

What is likely to happen is that a high latitude system, originating from the Gulf of Alaska or western Canada will move southward into CA toward the end of next week as shown by the GFS ensemble mean 500-mb height below.  It will either merger with or move into CA with the previous system and will likely keep the snowfall ongoing.

The weather pattern looks to remain favorable for more storms through Christmas as both the ECM (image below) and GFS (two images below) ensemble means are rather similar with the forecast upper-level pattern of a trough along the West Coast extending southward into CA.

As a matter of fact, both of those models (images below) remain mostly unchanged with the favorable pattern in place through the end of the forecast period that is basically the end of the year.

The Quantitative Precipitation Forecast (QPF) output from the models is impressive with the ECM EPS showing almost 9” liquid for the period and the GFS ensemble (image below) similar or only slightly less.  If the latest GFS operational run verified, Mammoth will be buried in snowfall (three images below) as it has over 12” liquid for the mountain or 100-120” of snowfall. 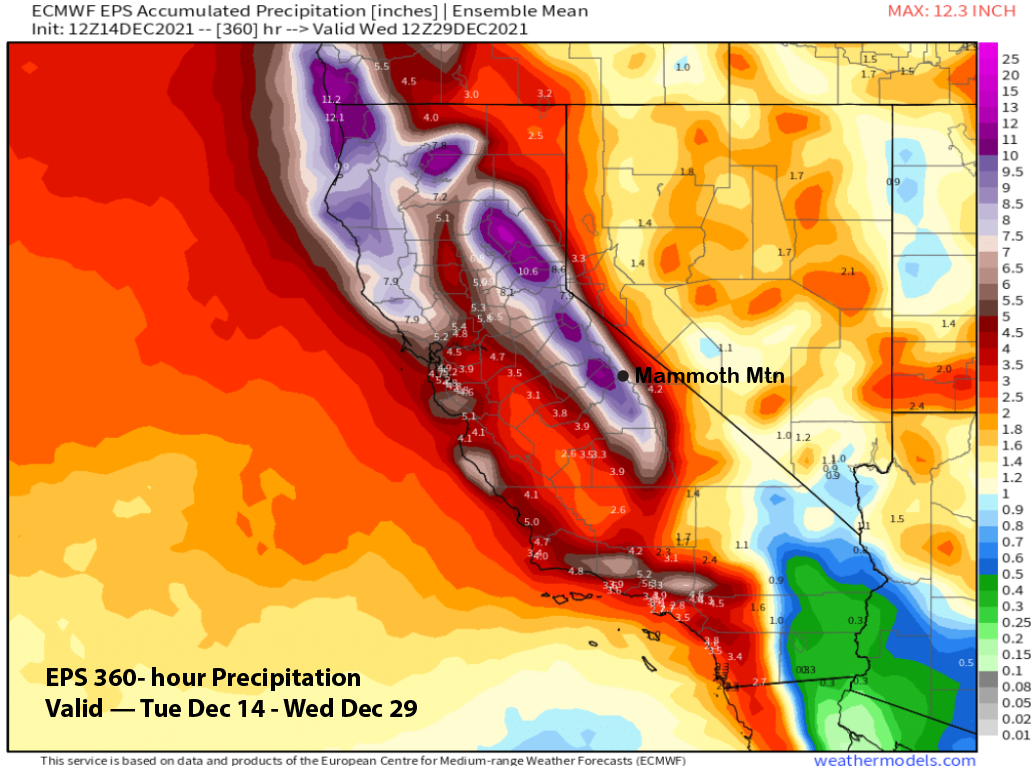 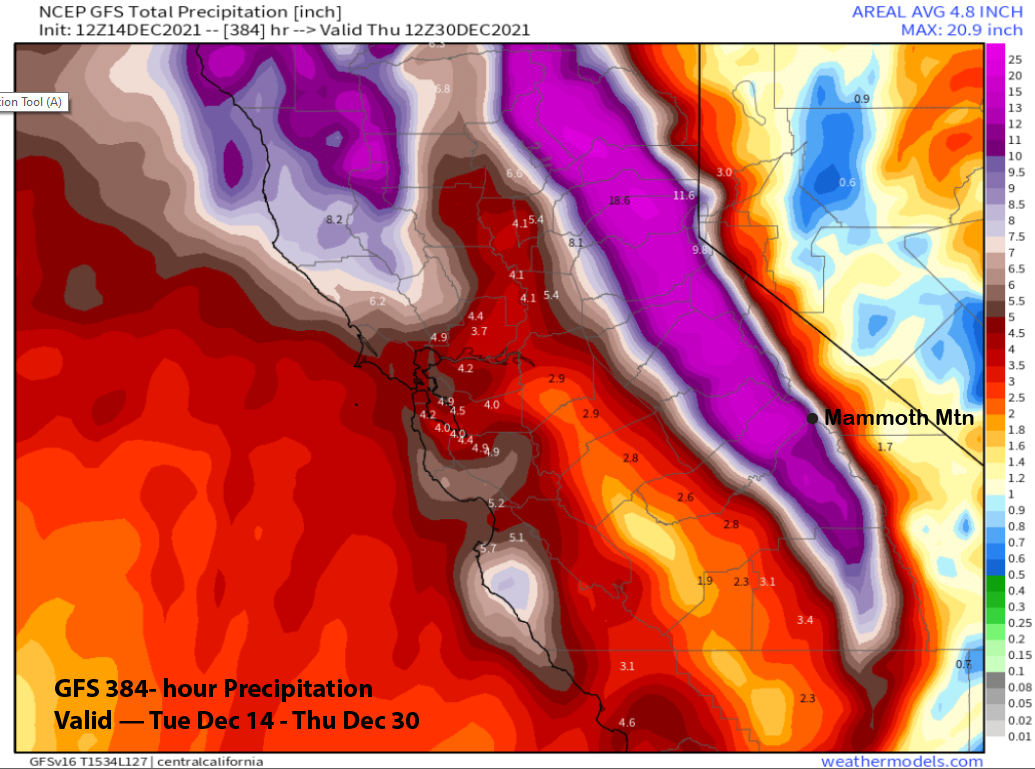 Overall, the details need to be sorted out for next week, but potential rider of the storm days would be Tuesday through Friday and also a chance on Monday. Powder days would be almost every day next week starting on Tuesday as there doesn’t look to be extensive breaks between storms.

Longer range ECM model keeps the storms going into the first part of 2022 and also at times into the second week.  The latest CFS model is similar.  I think it will depend upon whether the MJO remain strong/active and if it traverses eastward through phase 8 and into 1, or remains stationary in phase 7 as the ECM model suggests.  An active MJO in phase 1 in the first half of January usually results in normal snowfall.  If it can get to phase 3 and 4 by the middle and later part of the month and remain strong, then we could have a another big month. WG