Tue 12/21 – Dry during the morning, then snowfall chances increase during the afternoon and become likely overnight.  Accumulations for Wednesday AM 3 –9” 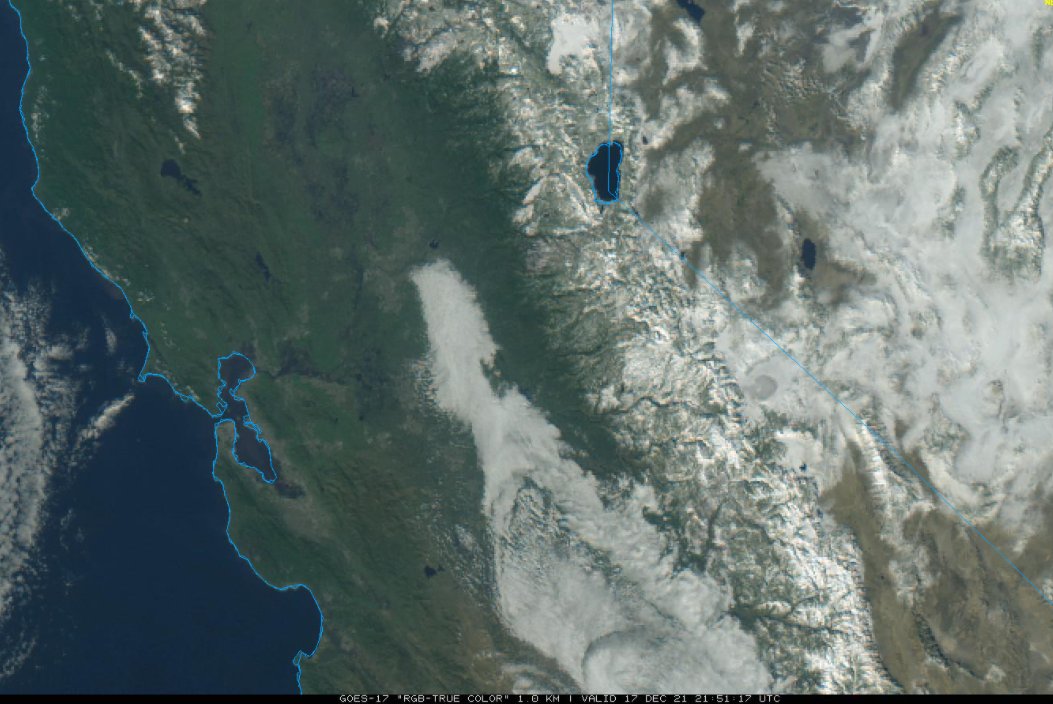 High pressure will build into the state today and tomorrow and should hold over Central CA through at least Sunday (image below).  Warmer temperatures are expected through the weekend, but should remain seasonable and the snowpack fresh.

The guidance then favors a upper-level closed low to move onto the CA coast on Tuesday (image below). Snowfall should begin in Mammoth by the late afternoon or evening and continue through the overnight hours into Wednesday as the next storm cycle ramps up.

The longer-range guidance is basically unchanged from the previous post and favors another major storm cycle for CA and Mammoth starting the middle part of next week and possibly continuing through the end of the year.

The ECM (images below) and other models develop a deep trough along the West Coast next week and move multiple upper-level lows from the Gulf of Alaska of varying strengths into CA every couple of days through the Christmas holiday weekend.

This pattern is well supported by the ensemble means from the ECM (image below) and GFS that show a deep trough end of next week and into the Christmas weekend.  Only a handful of ECM ensembles out of 50+ are showing less than 4” liquid over the 10-day period.

The latest runs of the operational models are showing very big amounts in the 10-day period through Christmas.  The ECM deterministic run is the wettest of the models (image below) with around 13” liquid, but probably too wet, as it is wetter than all but one ensemble.  The GFS is also quite wet though (two images below) with almost 12” liquid while the Canadian (three images below) is the “driest” at around 9” liquid. 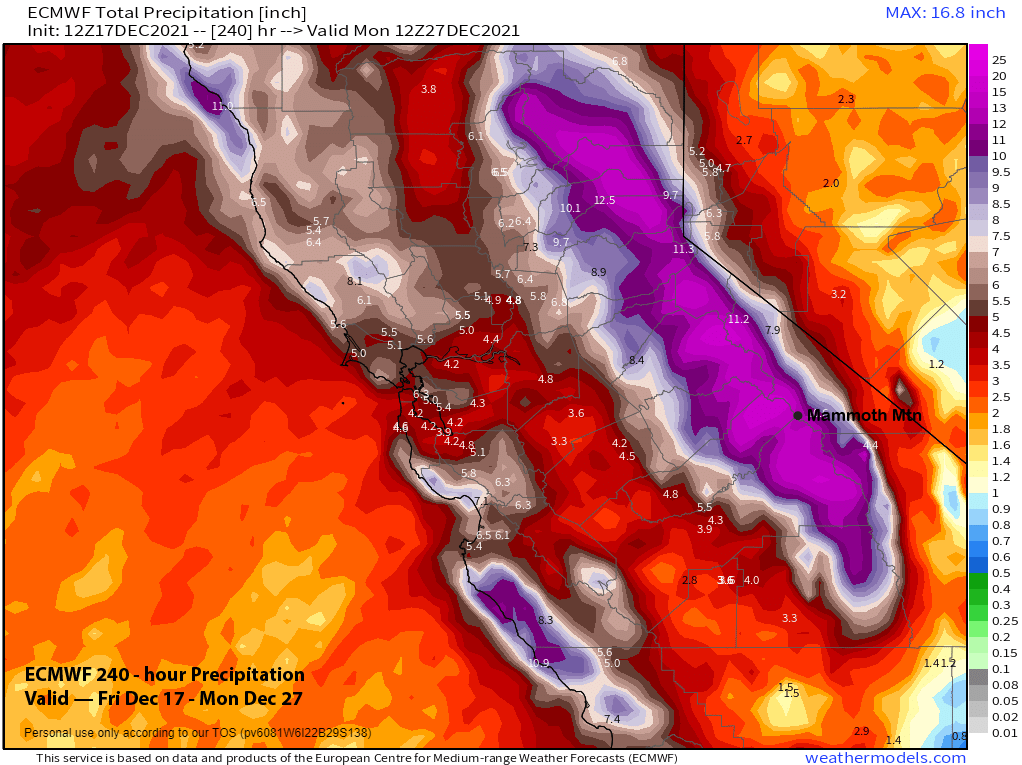 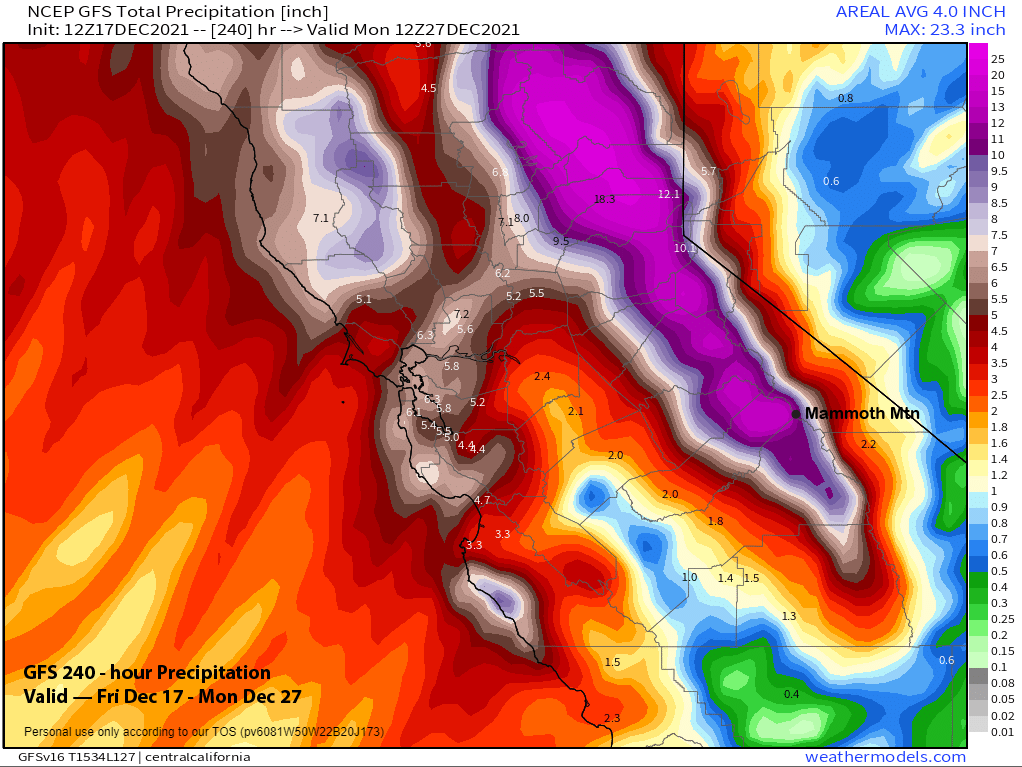 Overall, if these models verify, then the mountain will get buried with snowfall (8-10 feet) and the town will get a lot of snow too, probably too much to handle for this time of year.  Current forecast follows the ECM and GFS means that show about 7-8” in the 10-day period.  Hopefully the details will be sorted out with the next update, but regardless, confidence is high that a lot of snow will fall starting around the middle part of the week and lasting through the holiday weekend.

The guidance keeps the longwave trough in place along the West Coast basically through the end of the year. Both the ECM (image below) and the GFS (two images below) are remarkably similar for such an extended projection.  This pattern would keep storms coming into CA, likely the colder type that produces lighter type snowfall along with cold temperatures.

The models do suggest the trough will shift east by early 2022 with the ECM model (image below) slightly faster with this shift versus the GFS (two images below).  Overall, both the ECM ensemble mean at nearly 9” (image below) and GFS ensemble mean at nearly 10” (two images below) are favoring significant precipitation over the Sierra for the 15-day forecast. The 12Z run of the GFS (three images below) shows ridiculous amounts that is likely the wettest case scenario at over 20″ liquid that would equate to 200″ of snowfall at 10:1. 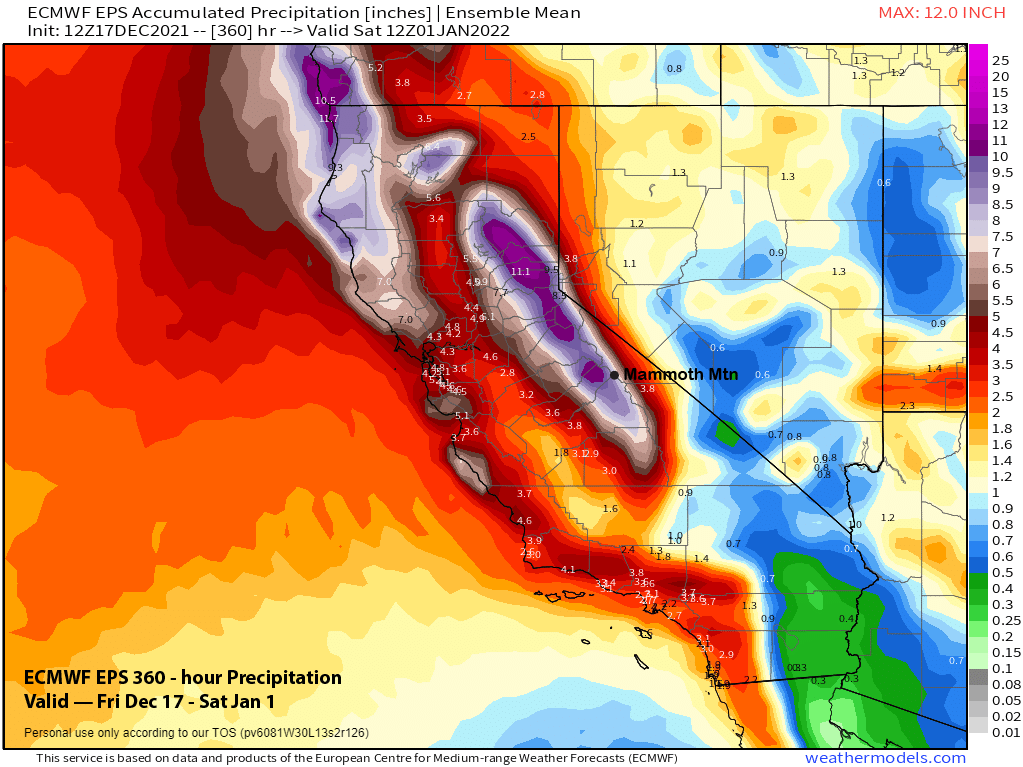 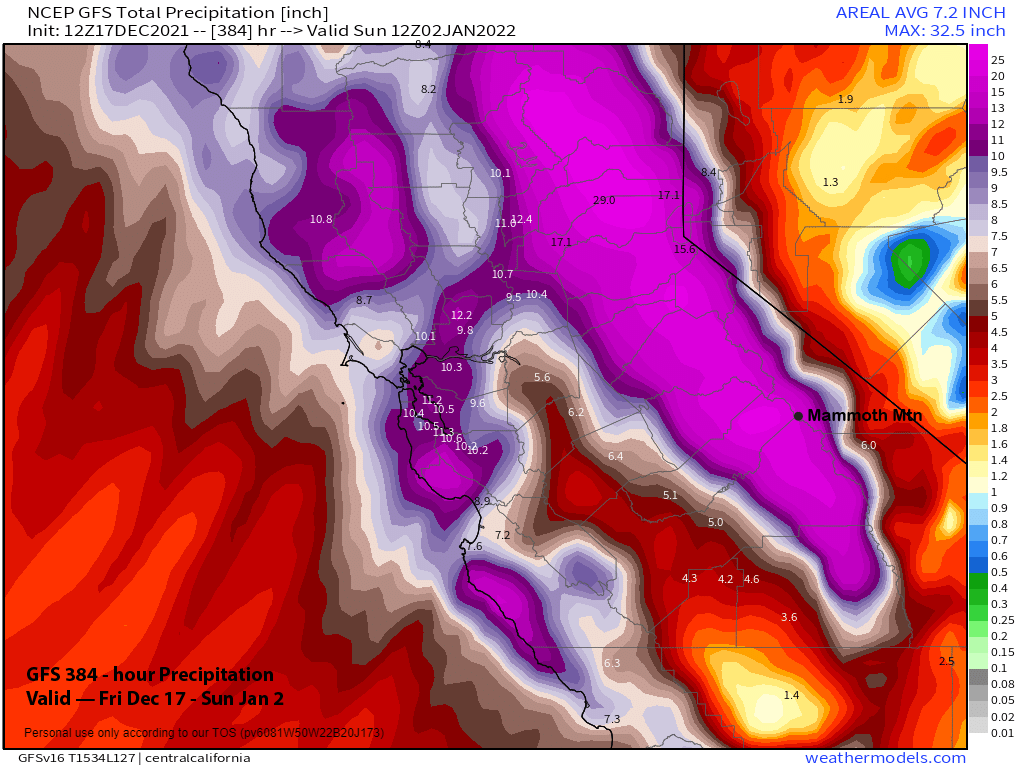 The ECM climate model does keep the precipitation ongoing in the 14-21 day (image below) and 21-28 day (two images below) periods with it taping off toward mid-January. With the latest mean showing a shift west with the trough beginning of the month, not sure that forecast will verify. 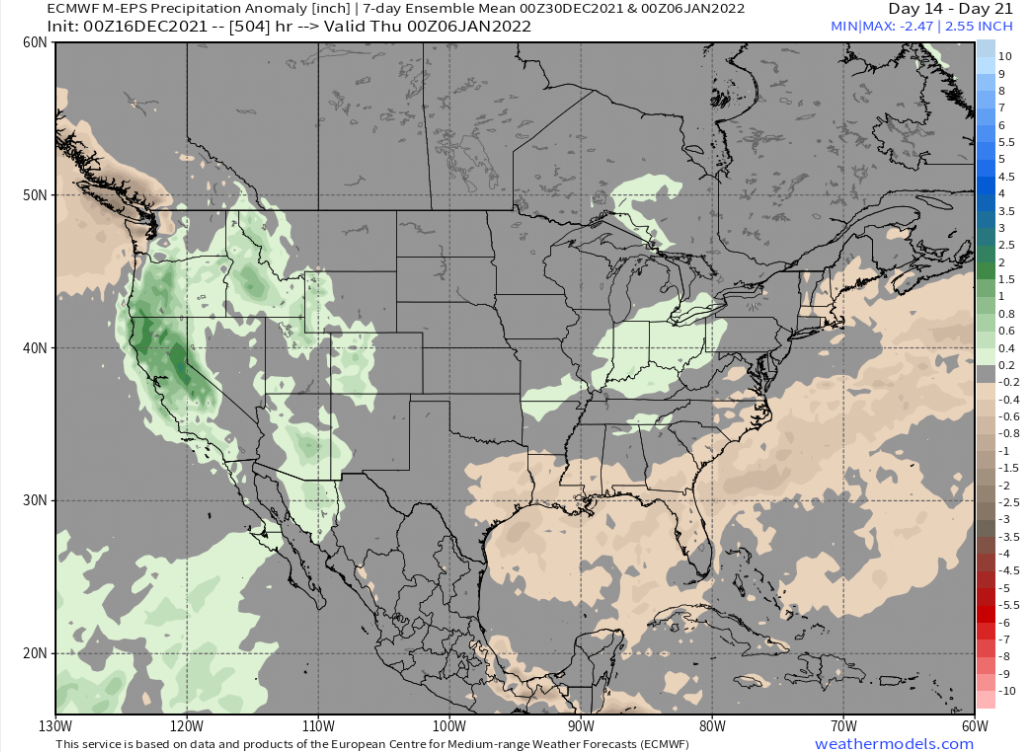 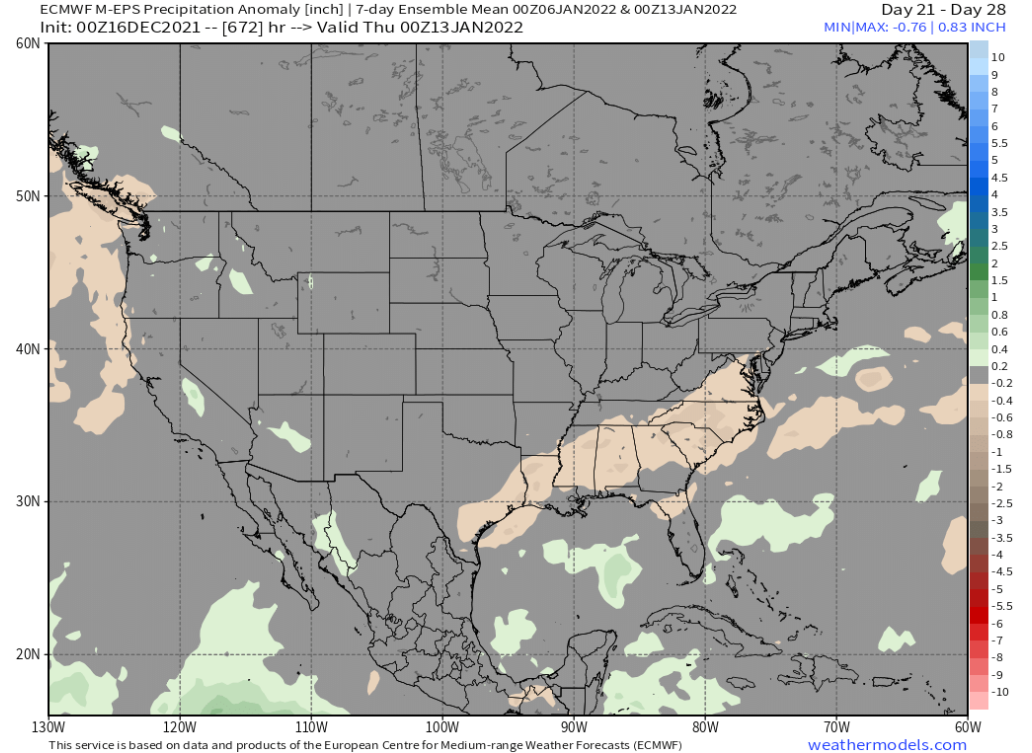 It depends upon whether the MJO does indeed shift eastward out of phase 7. Models are struggling with that forecast.  Phase 7 turns dry over the first part of January, so a shift eastward into the Indian Ocean and Maritime Continent (phases 3-4) is the best way to avoid a longer drier period that will inevitably come.  But for right now, it is time to feast on powder. WG