Wed 12/22 – Light snowfall during the day increases at night, becoming heavy at times overnight.  Accumulations 10 –12” by Thursday AM at Main, 12”+ up top

Thu 12/23 –Heavy snow and strong winds during the day and into Thursday night, tapering in intensity toward dawn. Accumulations 25 –30” by Friday AM at Main, 36”+ up top

Fri 12/24 – Snow, heavy at times during the morning and gusty winds. Snow tapers during the afternoon and ends overnight  Accumulations 5 –7” by Saturday AM at Main, 9”+ up top

Sat 12/25 – Snow develops by midday and becoming heavy at times during the evening, tapering off overnight.  Accumulations 12 –15” by Sunday AM at Main, up to 20” up top

The current infrared satellite image (below) shows a storm system moving into NorCal with extensive cloudiness off the coast in the eastern Pacific.  That storm system will move slowly southward into the Mammoth area by tomorrow morning where it is expected to stall for about 36 hours.

The ECM model (image below) drives a short wave from the Gulf of Alaska into the trough on Thursday and into Friday and that will act to strengthen the moist upslope southwest flow into the Sierra and energize the front.

Snowfall rates are forecast to increase tomorrow night with heavy snowfall and strong winds forecast for Thursday and into Thursday night. Snowfall, still heavy at times, should continue through Friday morning before tapering off during the afternoon and ending overnight.

Model QPF has gone up significantly for this storm as it is now forecast to pull in much more moisture off the Pacific.  The GFS is showing very large amounts  and around 7” for Main (image below) with the ECM model (two images below) showing less and around 5” liquid.  Forecast favors slightly more than the ECM and a bit less than the GFS. 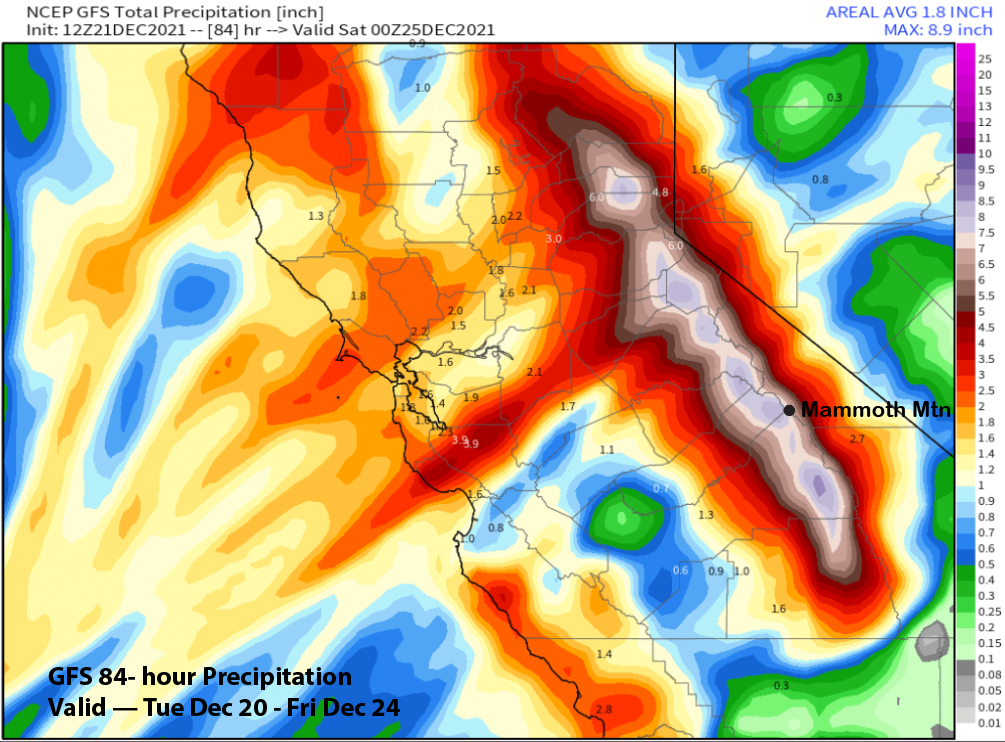 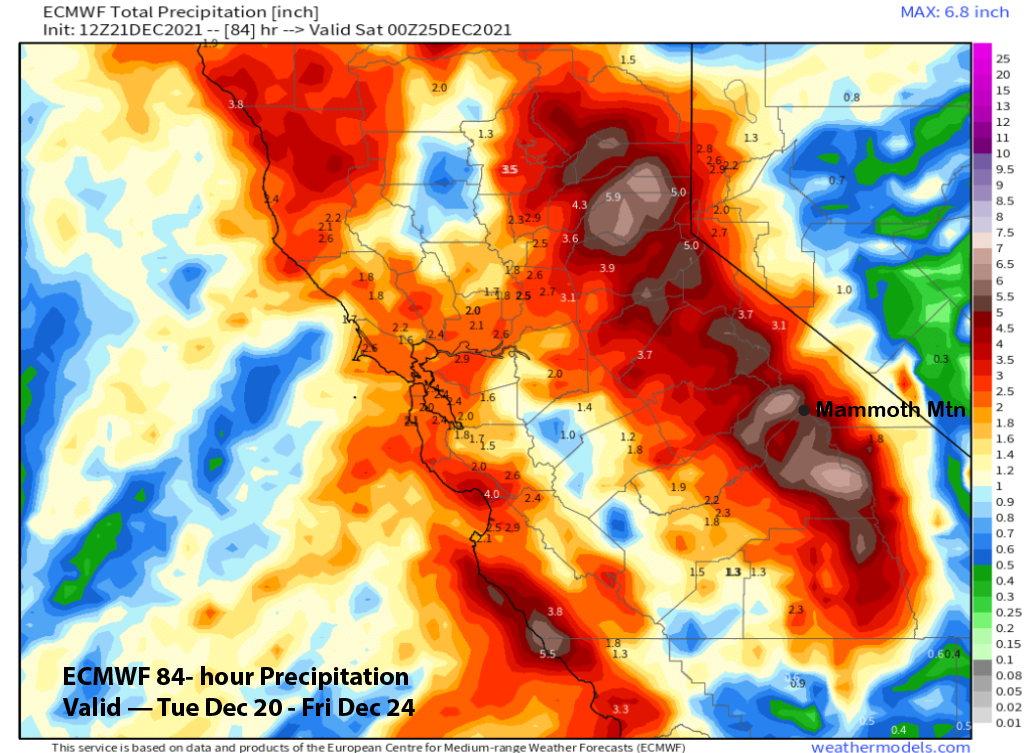 Snow levels will also be higher with the event and will start out around 8000 feet with most of the snow falling with snow levels in the 7000-7500 foot range before levels fall to 5500 feet as the storm is ending. So the end result will be a few feet of Sierra cement base type snowfall for Main and possibly 4 feet or more up top.  Canyon and Eagle should see at least a couple of feet.

Snowfall is forecast to taper off on Friday or Christmas Eve night before the next fast moving storm system (image below) moves through Mammoth on Christmas afternoon and night. This will be a colder type storm with snow levels starting out around 4500 feet before lowing to below 3000 feet by early Sunday when the snowfall ends.

Models are showing about an inch of liquid for the mountain that should translate to 12-20” of light, fluffy powder for Sunday shredding with temperatures remaining quite cold.  This shot of powder will be the best quality snowfall so far this year.  With even better quality snowfall likely to follow.

The longer-range guidance is showing a pattern similar to February 2019 when there were many, many days of epic powder as every storm but one was a cold storm from the Gulf of Alaska.

The ECM model (image below) moves a very deep upper level low into the PacNW and NorCal early next week and the other models are similar. This would likely result in another round of light and fluffy powder Monday night and into Tuesday.

The ECM then moves the deep upper low southward toward the end of next week (images below) that would keep the cold-type of powder at 15-20:1 ratios or higher going through the end of next week. That would mean riders of the storm and/or powder days every day for the Holiday week.  If you are reading this blog, I can probably assume you are not a fair weather skier/boarder.

I also can’t remember forecast temperatures getting as cold as the ECM is forecasting with -20C temps at McCoy (image below) that would translate to -5F.  I hope that doesn’t happen because it is just too extreme. 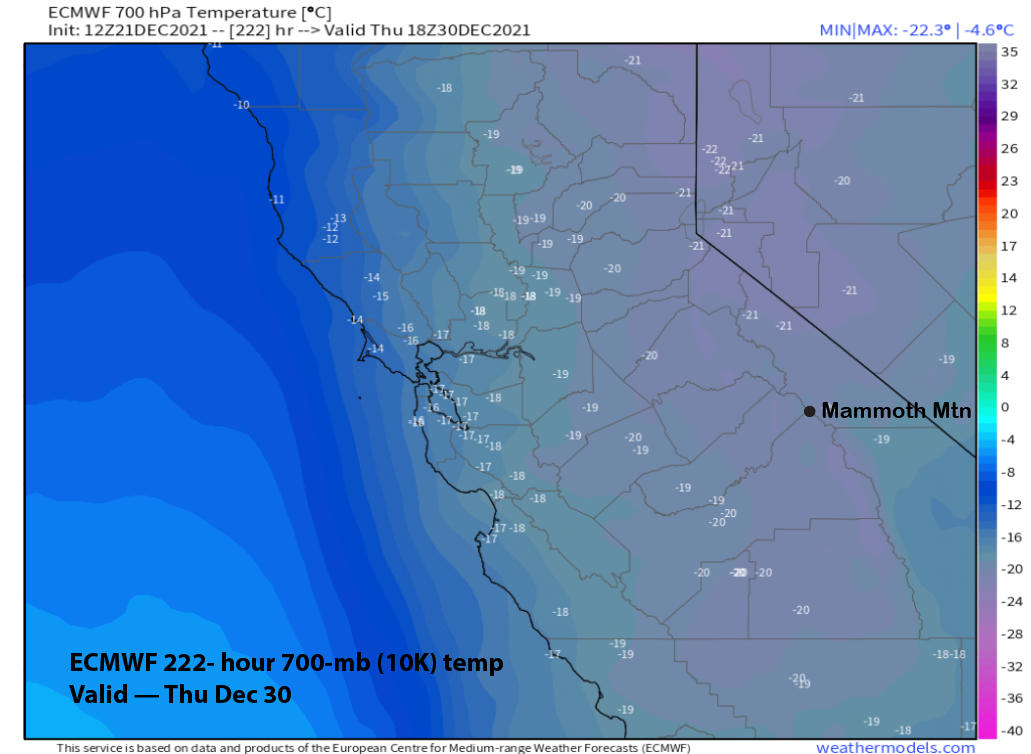 It might not, because the other models are showing a slightly different solution with the Canadian (image below) and GFS both showing the deep upper-level trough having more over-water trajectory and west/southwest flow as opposed to cold northwest/northerly flow.  That would also mean higher snow amounts, but not as fluffy of snowfall. GFS has almost 5” liquid (two images below) more in the period starting Friday night and through next Wednesday. 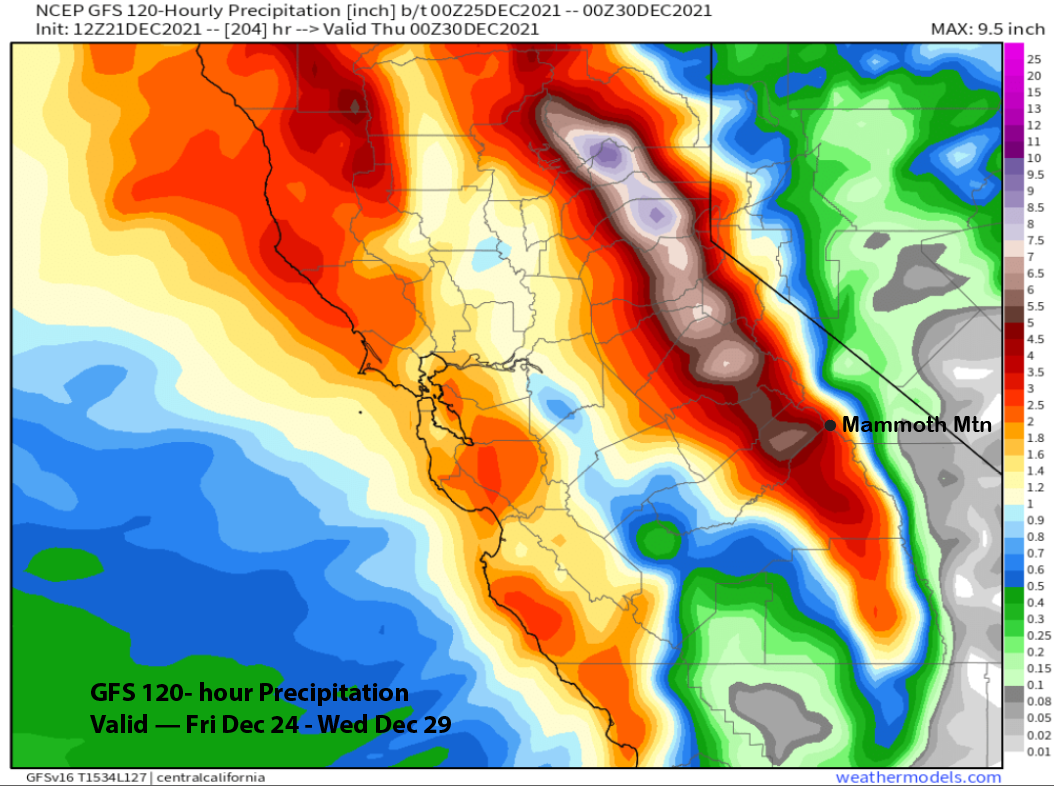 The Canadian (image below) and GFS are the wetter models in the total 10-day period at around 12” liquid due to orientation of the trough next week and the ECM drier (two images below) at only 8” liquid. 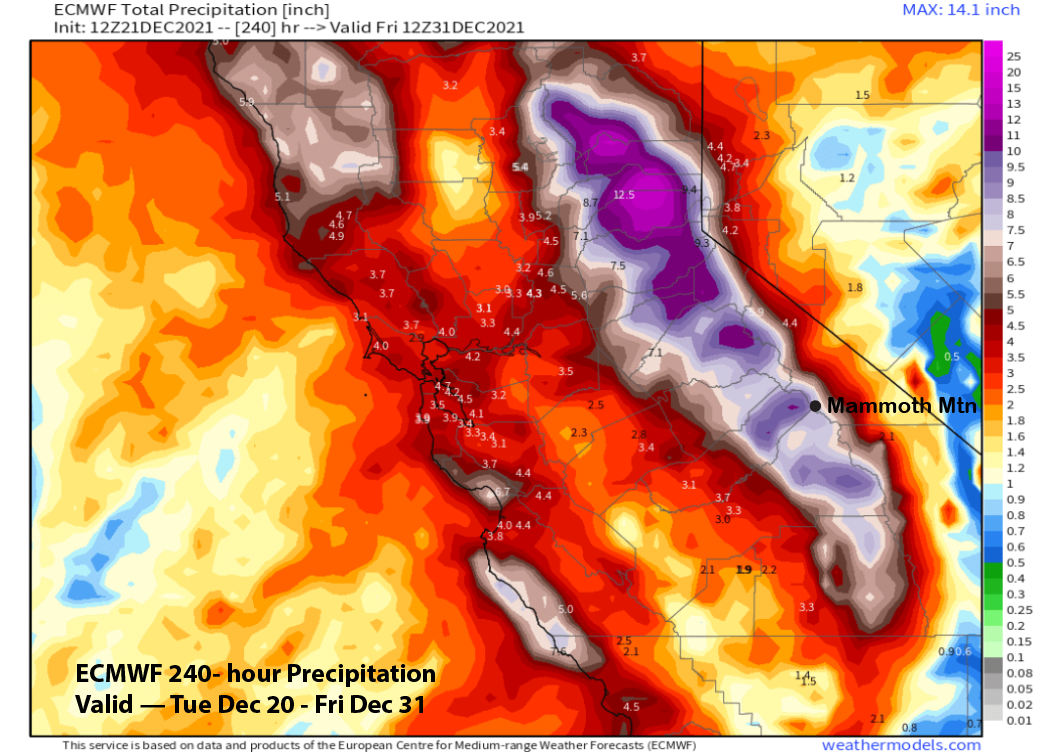 Regardless, enough snowfall is forecast to fall by the ECM (image below) to break the scale on the graphic with possibly up to 100” or more in some areas along the Sierra crest in the 10-day period. 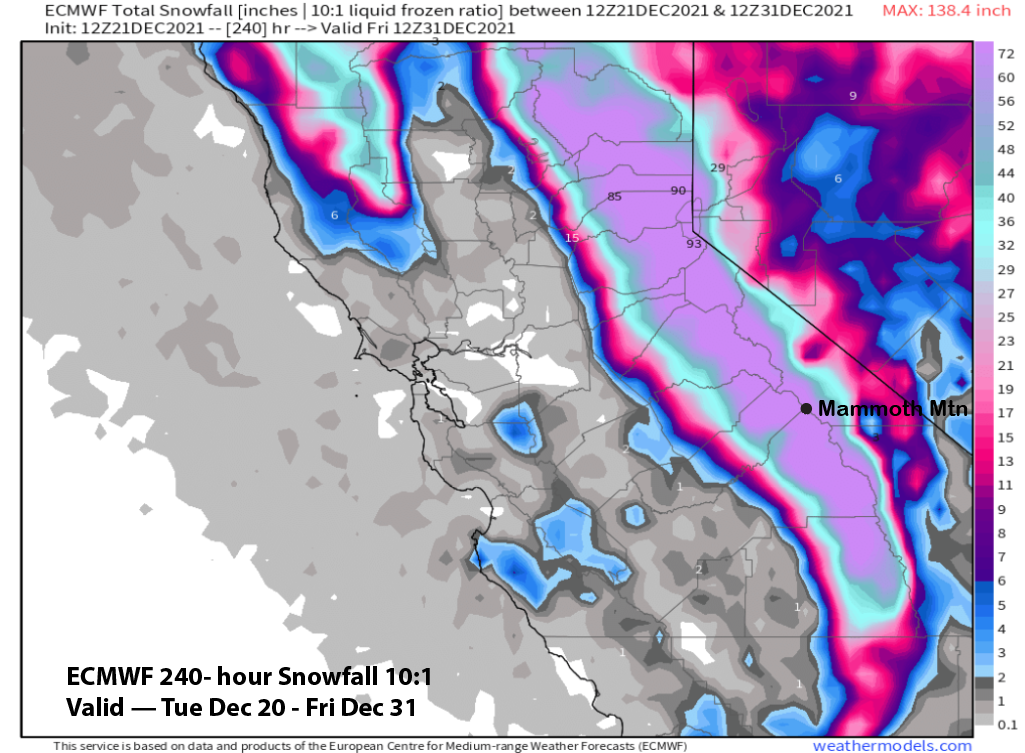 The fantasy range models are again in remarkable agreement about the upper level pattern in the 11-15 day period.  Both the ECM (image below) and GFS (two images below) show the upper level trough re-strengthening over the first part of January that would support more cold-type storms into Mammoth.

Overall, it is a great time to be in Mammoth if you love powder (and especially if you don’t have to shovel it) as this will be an epic period of powder days and storm riding for the rest of the year and into early 2022.  Both the ECM EPS (image below) and GFS ensemble (two images below) are showing over 8” liquid in the forecast period with confidence high that a lot of snow will fall.  And like the previous post, the GFS operational model is showing crazy amounts (three images below). 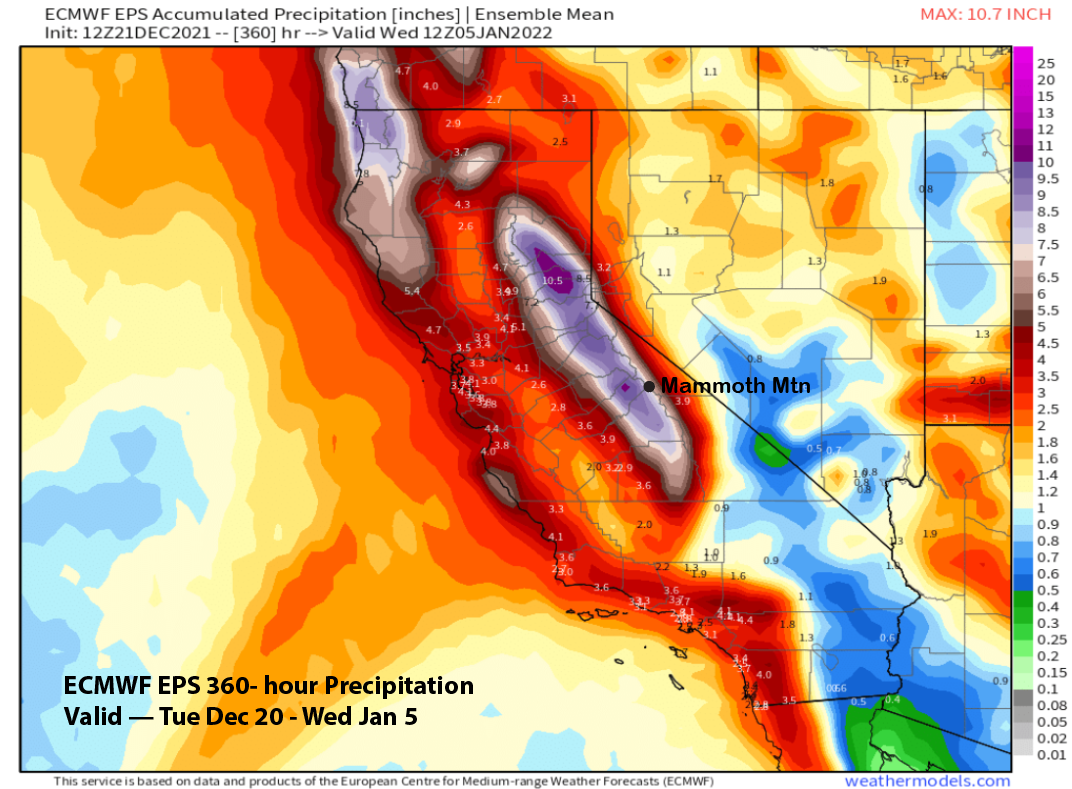 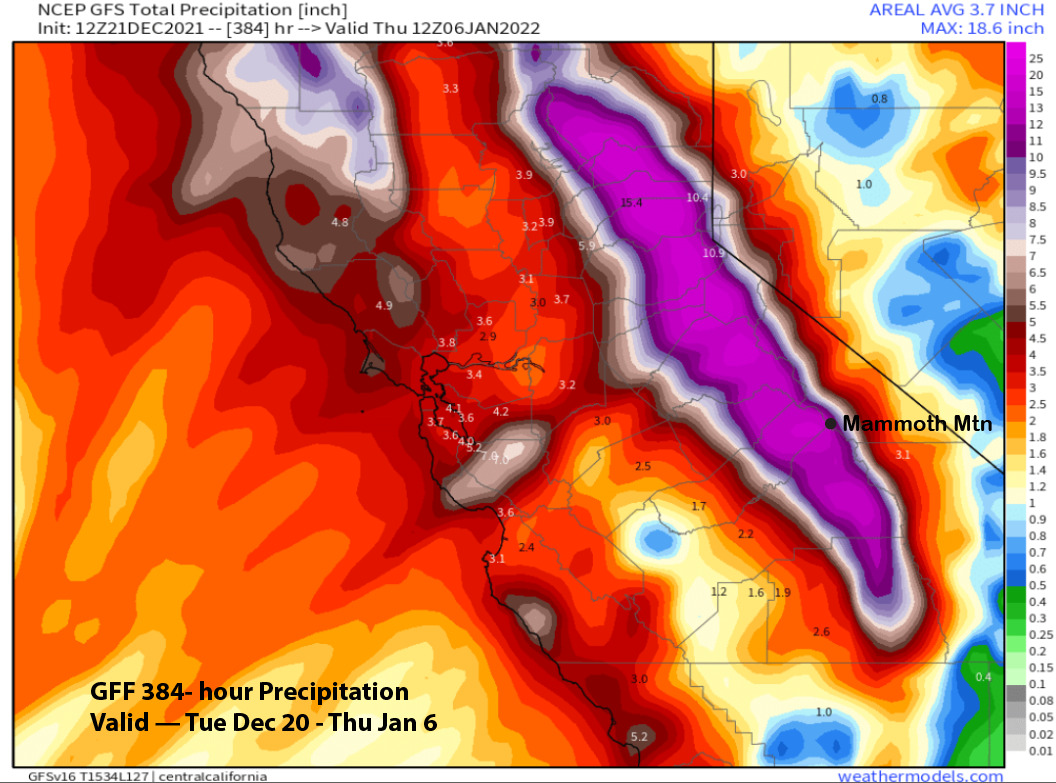 There are hints the trough will shift eastward by the end of the first week of January. Longer range ECM climate models is showing drier conditions returning in the week 3 and week 4 time periods (images below), but not completely dry.  There’s no time like the present.  WG 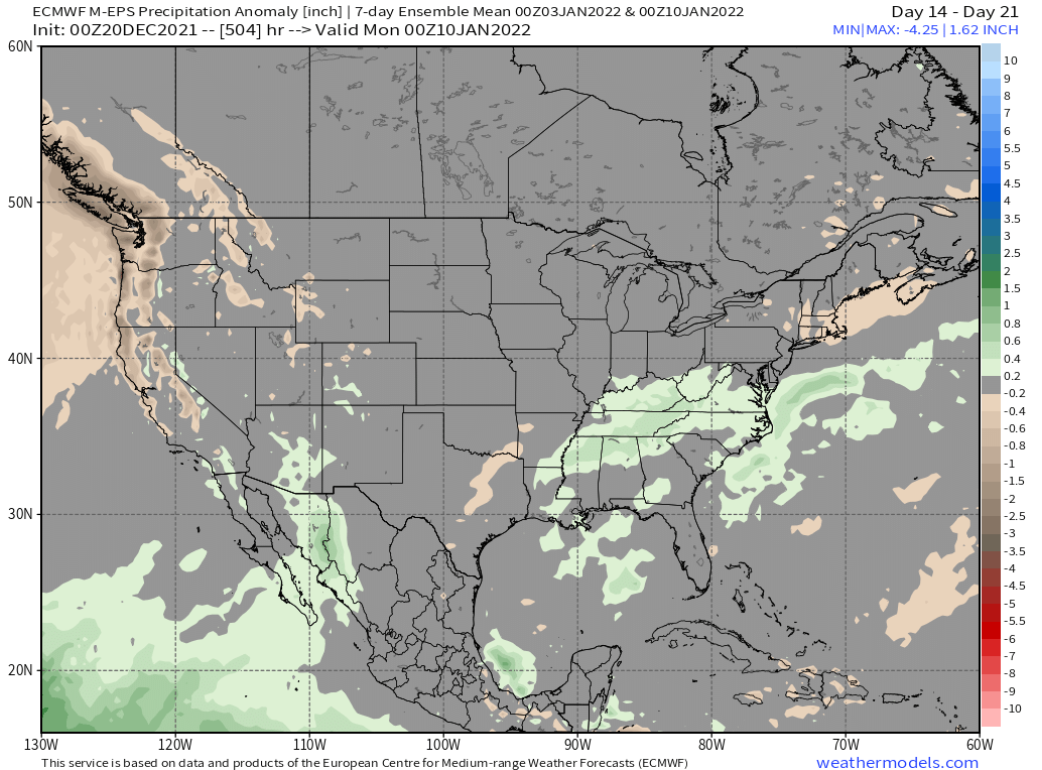 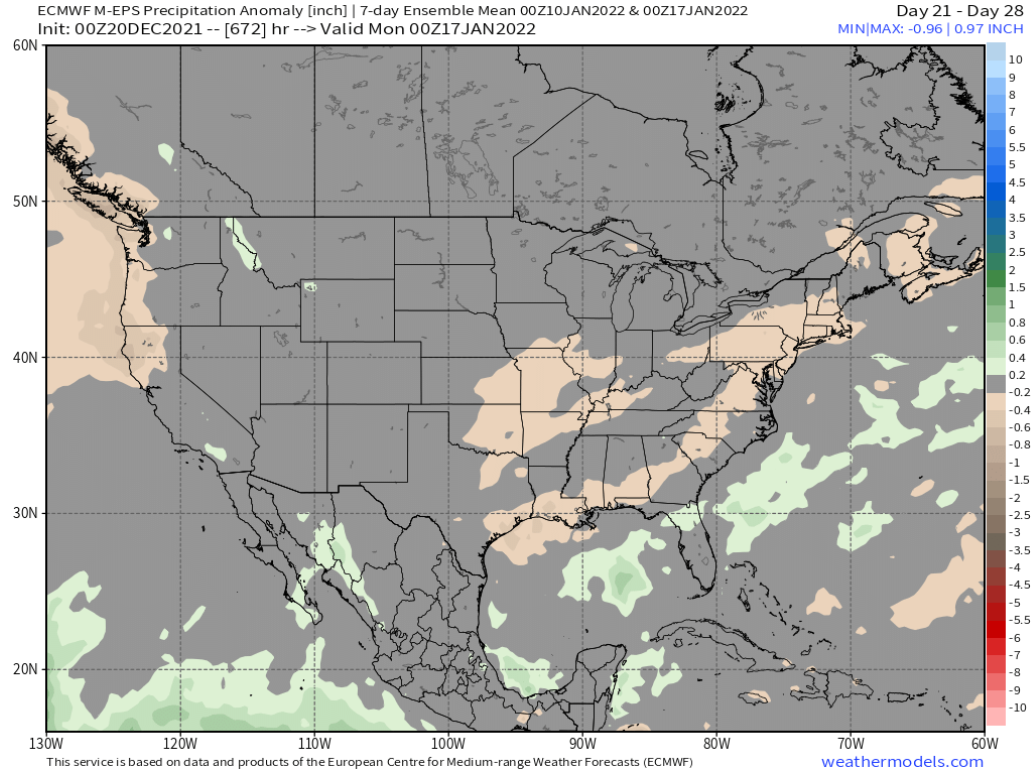