Fri 12/31 – Light snow showers or flurries during the day, ending at night. Accumulations 0 – 1” by Saturday AM.

The infrared satellite image (below) this afternoon shows a weak trough that had moved through the Mammoth area this morning with some light snow showers and flurries now in Nevada.  The next weather system is quickly moving southward from the PacNW and snowfall should increase late tonight.

Models move the upper low down the coast and close enough to the Sierra by tomorrow morning (image below) for the jet stream to push the front eastward into the range, although there are still some small differences in the models about the exact placement of the low.

The ECM (image below) and Canadian models are the wettest with about an inch of liquid while the GFS has about half that amount (two images below) as it is a bit farther west.  The ECM models is in line with the majority of the ensembles and the current forecast leans in that direction. 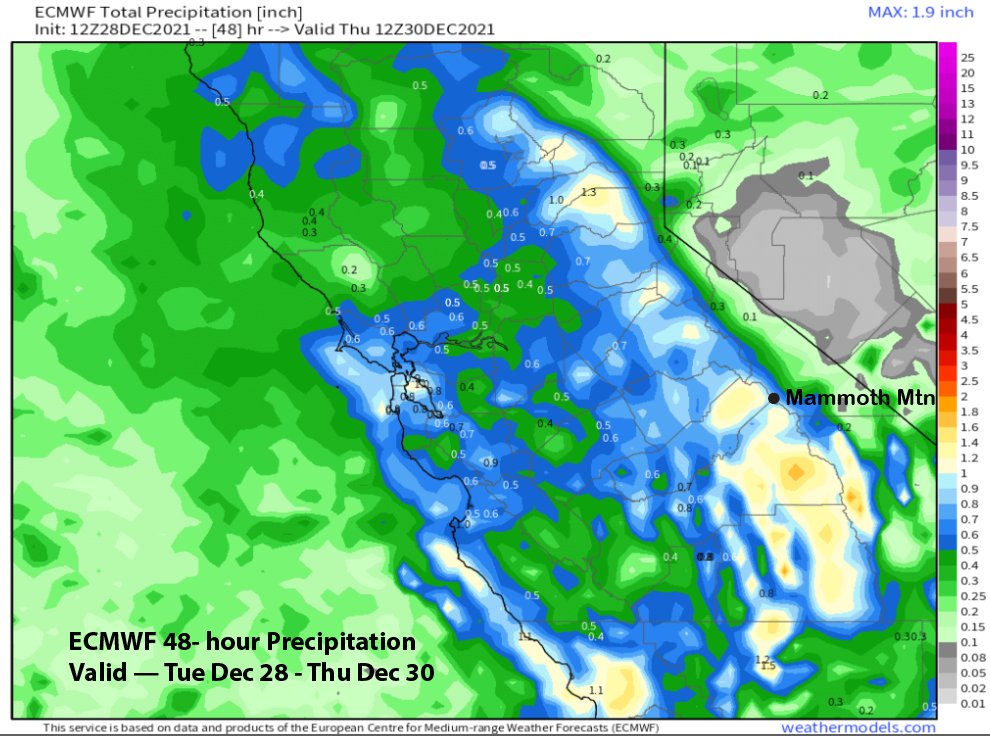 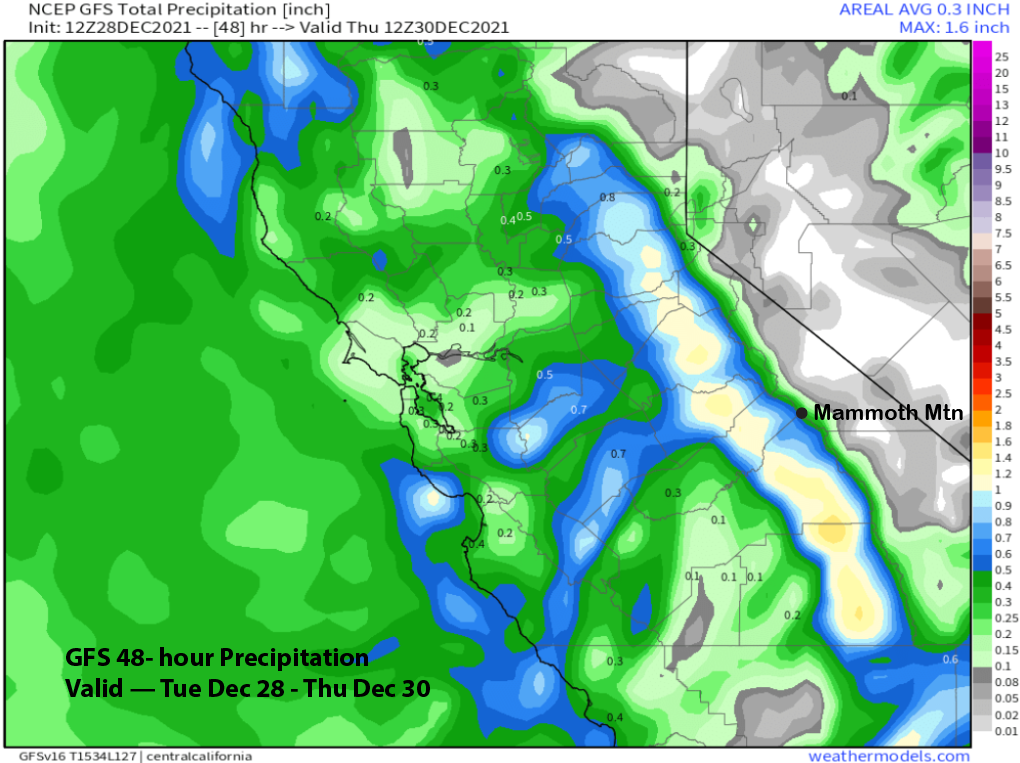 With a cold and dry air mass already in place and the weather system also being a high-latitude or cold-type of storm, snow ratios should be high resulting in the fluffy type snowfall.  In addition, winds won’t be as strong with this storm, so the snow won’t drift as much and should stack nicely. The forecast is calling for about a foot of dry powder for Main and 15″+ up top.  I suspect Ch. 22 will be epic tomorrow.

Thursday should be mostly dry other than afternoon/evening flurries as Mammoth will be in between weather systems.  A inside slider type storm will then move through Mammoth on Friday (image below) and may produce some flurries or light snow showers, but nothing significant.

The longer-range guidance is still calling for one more storm system next week before a period of dry weather gets established heading into mid-January.

The numerical guidance (ECM below) moves a transitory ridge of high pressure over CA this weekend for a couple day period of fair and dry weather.  Temperatures should remain seasonable and thus the snow conditions should be prime under light winds.

Models are then in agreement that a longwave trough will be re-established next week along the West Coast with the jet stream likely extending southward through CA, but there is still uncertainty about how far south.  The GFS model (image below) is the deepest and farther southward with the trough and its solution would result in large amounts of snowfall with storm totals around 7” liquid (two images below) or 4-5 feet. 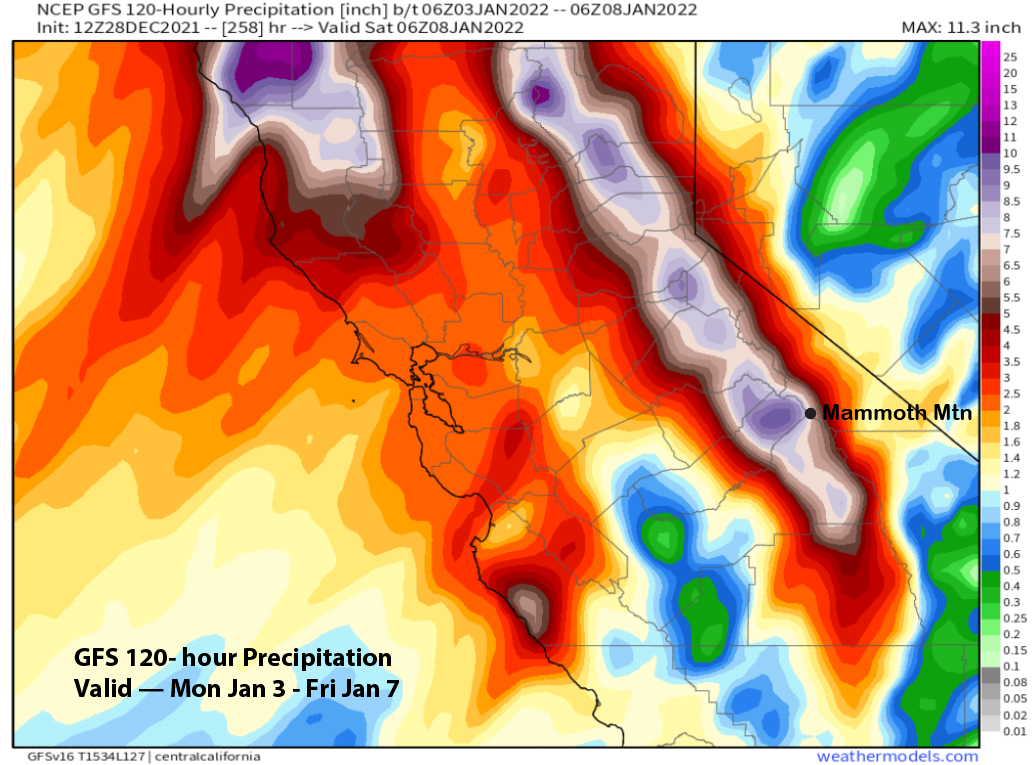 The Canadian model (image below) is the farthest northward with the trough and associated jet stream (blue and purple arrows) and it keeps most of the precipitation north of Mammoth. However, yesterday’s run looked like today’s run of the GFS above.

The latest ECM (image below) run is mostly in between the stronger GFS and farther north Canadian solutions.  It has a strong westerly jet stream into the Sierra that would result in a period of heavy snowfall similar to the GFS, but doesn’t add up to as much due to a slower moving storm per the GFS solution and  southwest flow that is better for orographic snowfall enhancement.

The ECM is still showing good amounts with about 1.5” liquid on Tuesday (image below) followed by another 1.5” on Wednesday (two images below). That would probably be good enough for almost two feet at Main  and more up top. 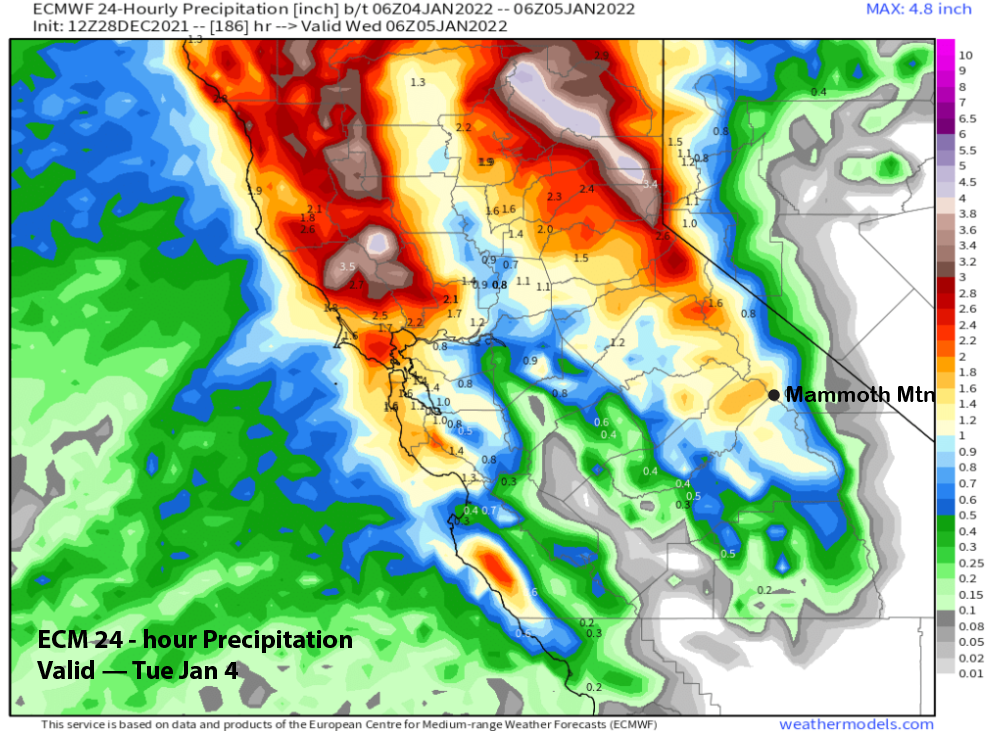 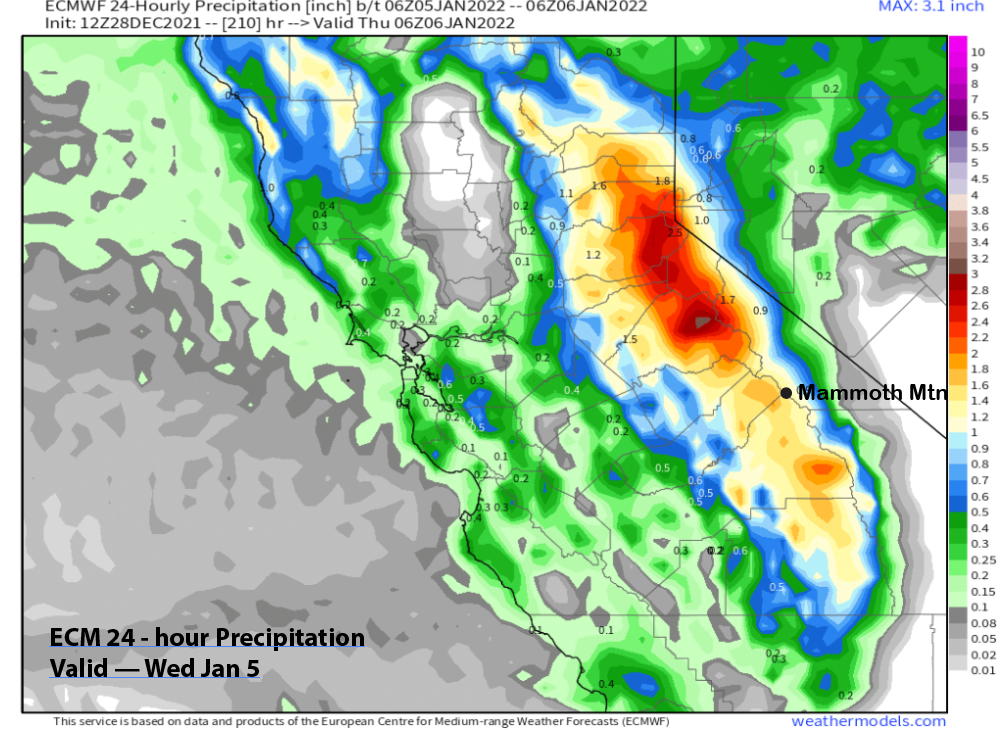 Overall, there is too much uncertainty with the models right now and it is still too far out in time to make the call about exactly will happen.  However, the ensemble means of the GFS and ECM are aligned and anther round of snowfall is likely, resulting in more powder days and/or riders of the storm.

That may be last call for awhile as the ECM ensemble mean (image below) and GFS are calling for ridging to develop over CA and the West Coast around the end of the first week of January. The ECM model keeps that ridge in place for the rest of the forecast period (two images below) heading into mid-January.

So there is probably a good chance for an extended break from storms second week of January with the longer range climate models suggesting a chance for storms to return after mid-month, but are not exactly bullish on that scenario as the CFS delays any storminess until the last week. WG