Sat 1/15 through Tue 1/18 – No snowfall expected all days except for a chance for light snow showers or flurries Monday afternoon/evening and again Tuesday afternoon, no meaningful accumulation expected.

The infrared satellite image (below) today shows high pressure has built into the northern part of the state and Nevada with a cut-off low pressure system situated far off the SoCal/Baja coast. That system is expected to slowly meander toward the coast over the weekend and will spit lots of high cloudiness over Mammoth at times.

The ECM (image below) and other models finally move it ashore Monday into SoCal and most of the weather will stay south and west of Mammoth with mostly just clouds expected during its passage, although the GFS model does produce some flurries or light snow showers Monday afternoon.

It also has that kicker low moving southward along the spine of the Sierra Tuesday night and Wednesday for another chance for flurries or light snow showers, the other models do not show this feature. The Canadian has it much farther eastward and the ECM has it like a traditional weak slider.  Nonetheless, no solution produces enough snowfall for powder conditions with mostly dry weather favored through early next week.

The longer-range guidance is mostly bad news, although there is some hope for change on the horizon.

The ECM model rebuilds the high pressure ridge (image below) through the middle part of next week with another weak short wave moving eastward well north of Mammoth and into the PacNW. The other models differ slightly, but still say the same thing, continued dry condition through the end of next week or longer.

The models build the ridge stronger over the following weekend (ECM model below) in response to strong troughing developing for the eastern half of the US.  The ECM has the ridge centered over CA while the GFS and Canadian models have it centered farther northward and over the PacNW.  Those models are suggesting that a weak low could sneak underneath the ridge into CA around the middle part of the following week.

The ECM EPS does show a weak wave moving through the ridge around mid-week (image below) while the GFS ensemble (two images below) has a more amplified ridge in place and in the generally same position as the ECM. 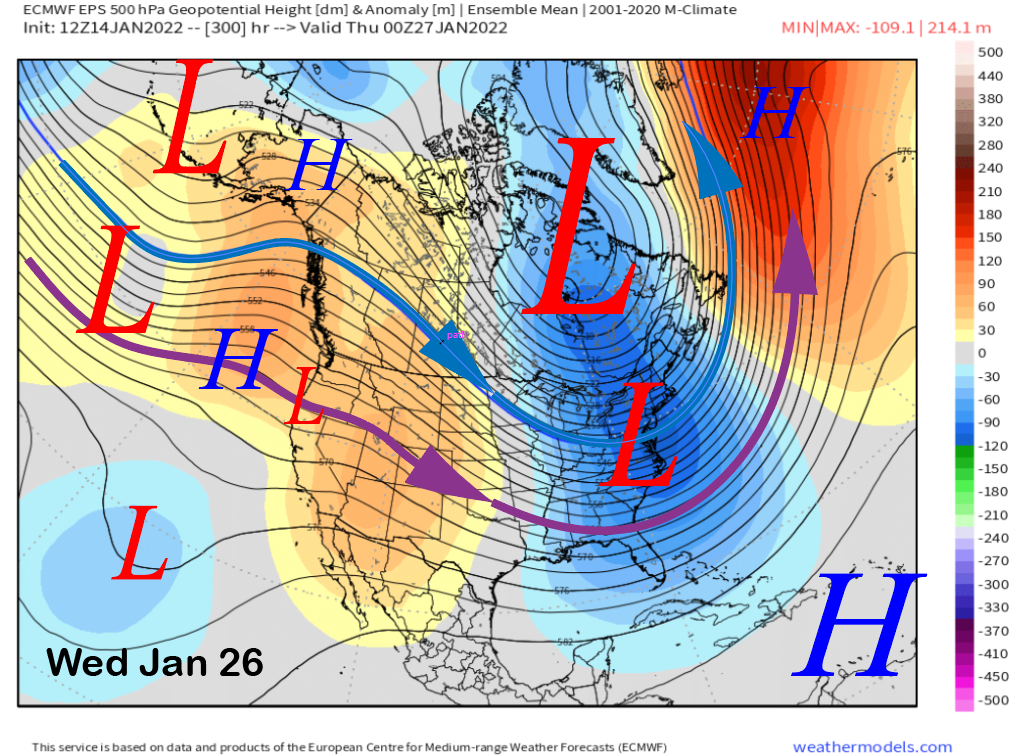 The same trend of a weak trough developing along the West Coast is present in the last couple runs of the ECM EPS (image below) just before the end of the month.  The GFS ensemble (image below) is not quite as fast with the evolution of any troughing and mostly keeps the ridge in place, even though the 12Z GFS operational run does develop a trough southward into CA at the end of the period (see featured image for QPF). 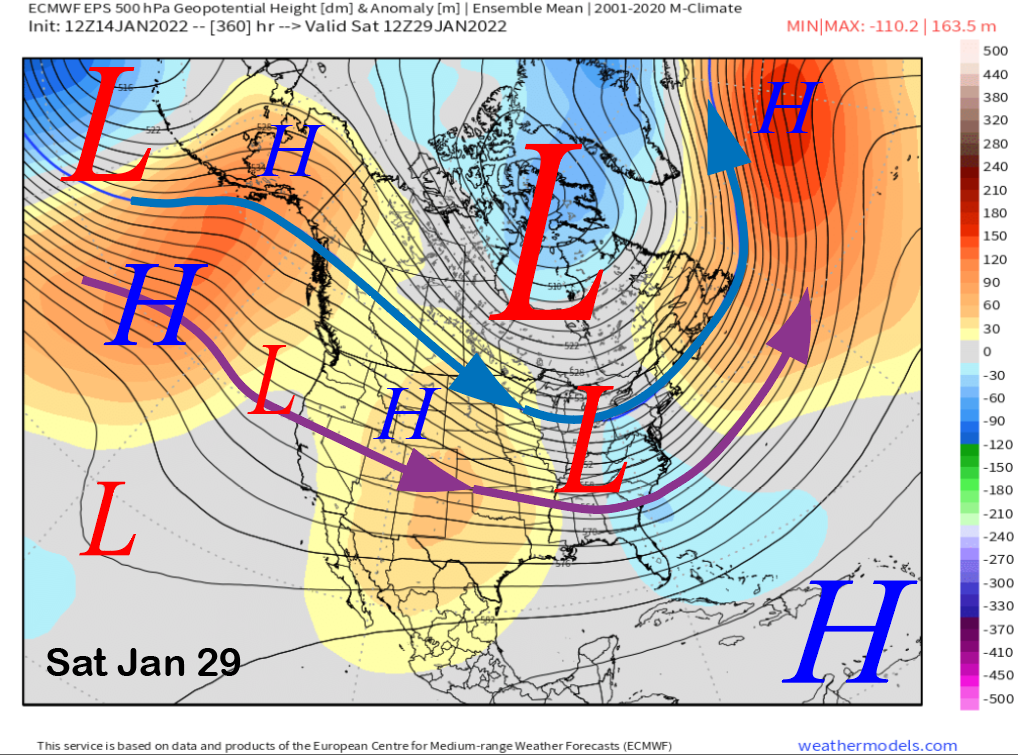 Overall, it will likely be mostly dry over the next 10 days like the ECM model suggests (image below) and probably mostly dry for the 15-day period (two images below) as the ECM EPS is only showing very light amounts that occur at the end of the period.  Hopefully the latest trend in the ECM EPS for West Coast troughing at the end of the period will continue in the next few runs. 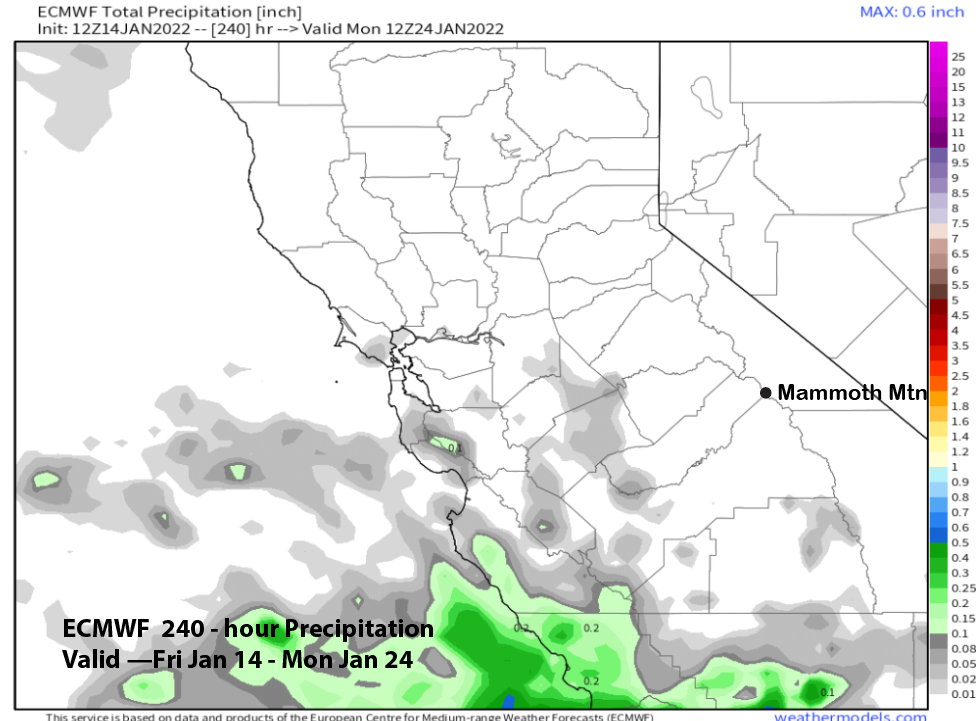 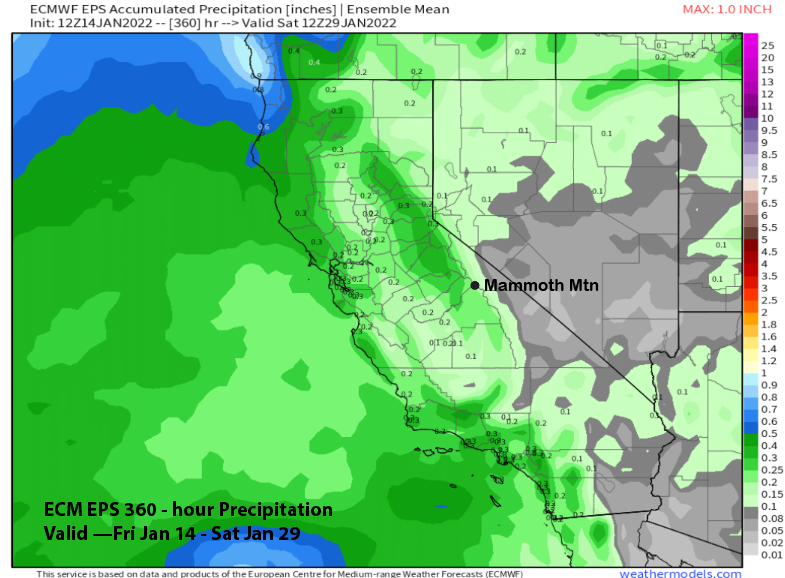 That is because the EPS 46-day run yesterday switched gears and went generally much drier now through the first half of February. That above normal period that was supposed to occur during the first week of February is now decreased into slightly below average (image below) ranges.  While there could be a storm that produces enough for powder conditions, the model backed off on a storm cycle. 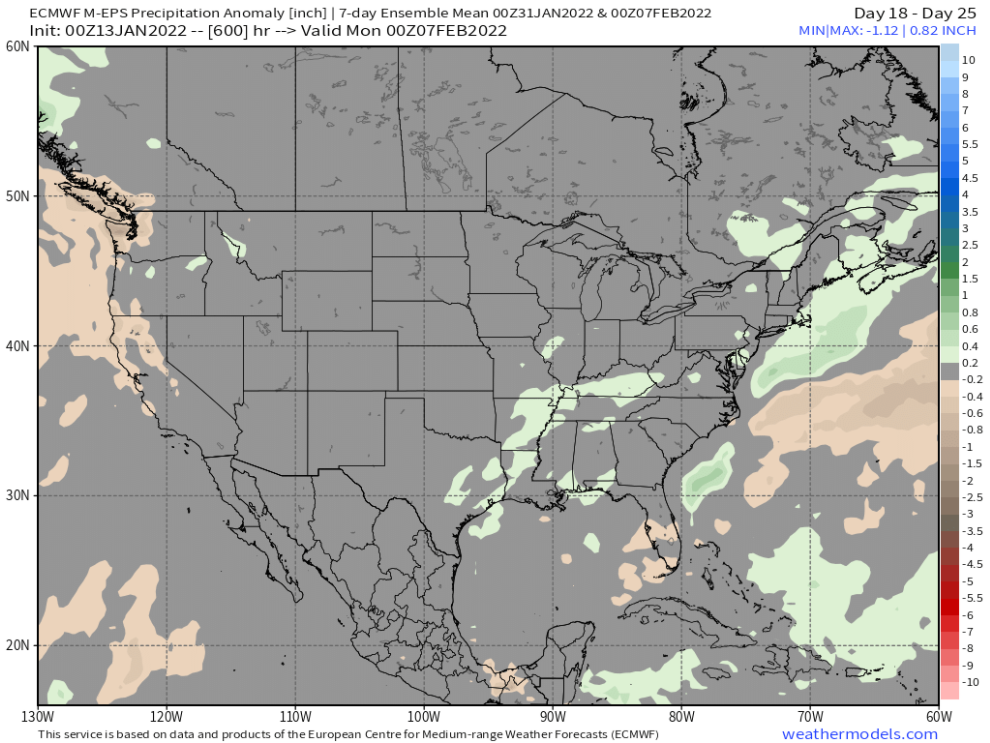 But I am not so sure that the models have a good handle on the super long range forecast heading into February.  And it mostly has to do with the MJO influence and whether there will be one. The models continue to struggle with that forecast with the ECM model consistently wanting to move it back westward when it ends up stationary or even moving a bit eastward.  The GFS forecast has been missing for awhile now, so that is a guess, as the CPS is updating their web site, hopefully for the better.  WG