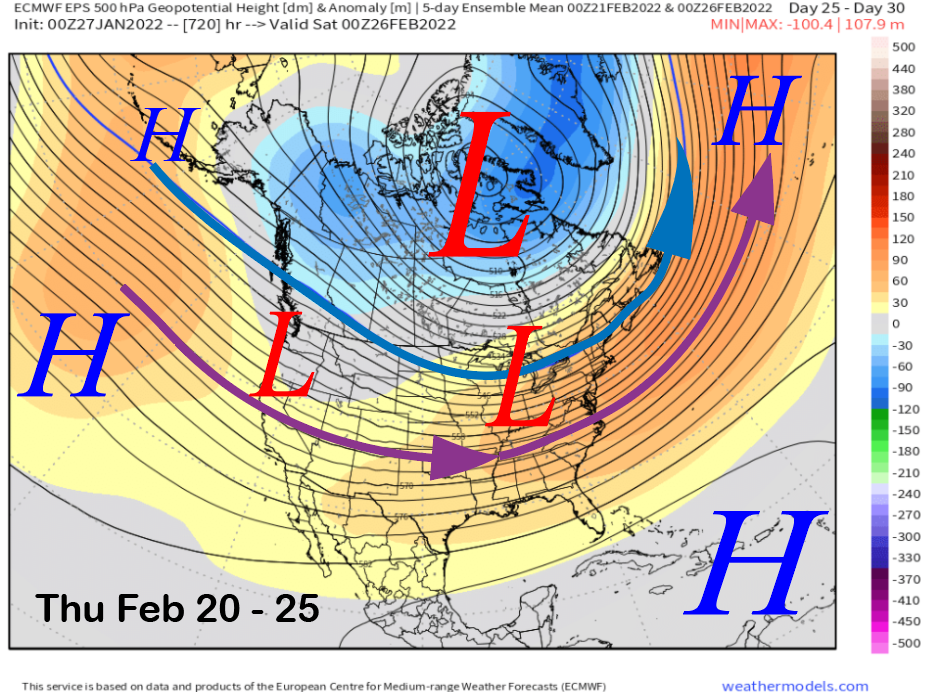 Sun 1/30 through Wed 2/2 – No snowfall expected all days except for a slight chance for light snowfall Tuesday afternoon/evening, maybe an inch accumulation if it happens.

The infrared satellite image (below) today shows partly cloudy skies as high clouds are streaming northward from a weak cut-off low moving through SoCal and into Arizona.  High pressure off the coast will build into the area tomorrow and should hold through Monday for more sunny weather, although winds may increase on Monday afternoon.

That is due to an approaching inside slider type short-wave moving through the Great Basin on Tuesday (image below) that will for sure produce colder temperatures and just a slight chance for any snowfall.

The ECM (image below) and Canadian models are dry with the passage of the weather system and have only gusty northeast winds. The GFS on the other hand, produces a brief period of moist upslope northeasterly flow on Tuesday afternoon and evening for a round of light snowfall that may add up to an inch as it shows almost a tenth of liquid (two images below). 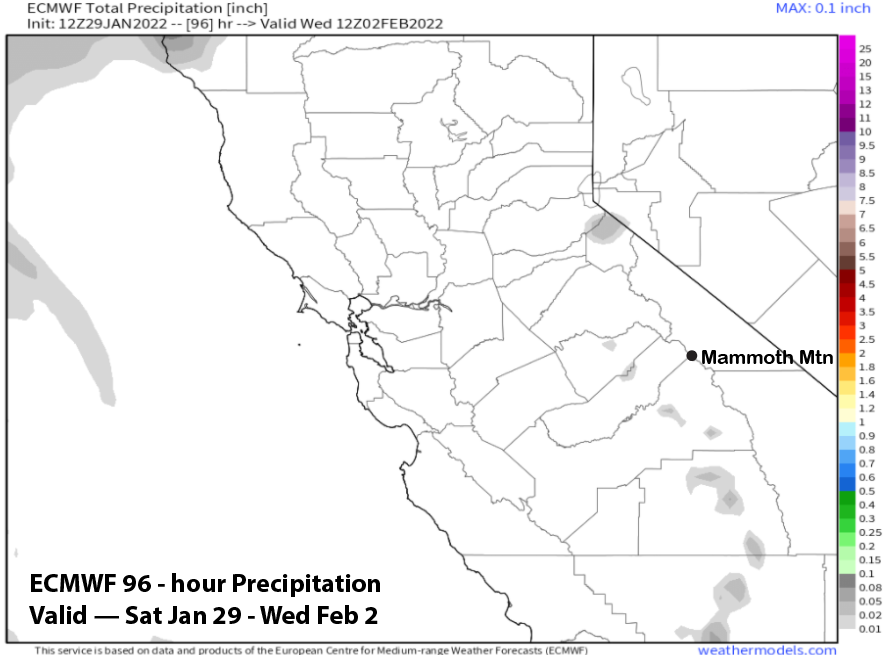 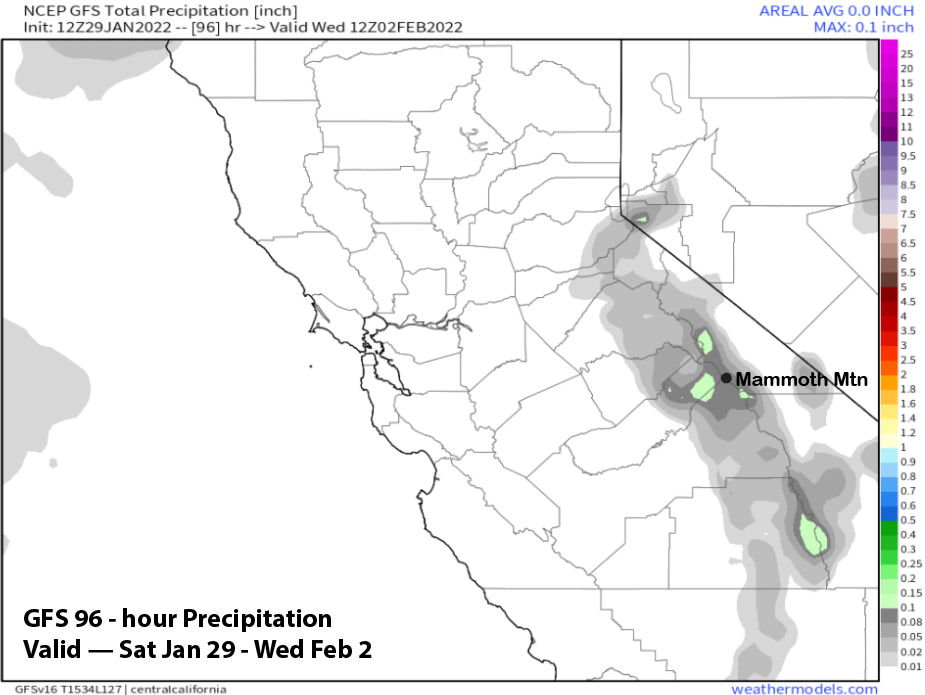 Only a handful of ECM ensembles show this solution, so it could happen, thus a slight chance.  Doesn’t matter anyway, since it would just be dust on crust.

That system moves eastward by Wednesday with Mammoth in northerly flow with a trough just to the east and a ridge to the west. That means seasonably cold weather with gusty northeast winds.  Thursday will be similar with a little less wind, but likely still gusty up top.

The longer-range guidance is still looking dismal through at least the first week of February and probably longer if most of the guidance is correct.

The ECM model builds the ridge farther eastward into CA end of next week (image below) and next weekend for continued fair weather and possibly warmer temperatures.

The ECM Ensemble Prediction System (EPS) pretty much keeps that ridge in place and strengthens it (image below) well into the second week of February.  The GFS is similar, although it does have the ridge a little farther westward that would only make a difference with temperatures.  Both are very dry patterns. 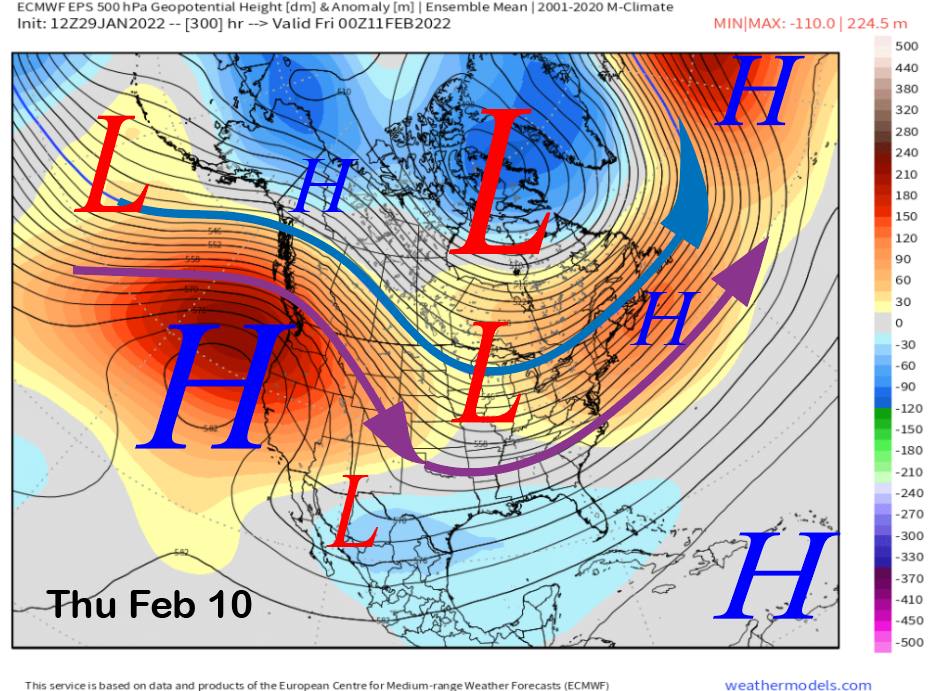 If to be believed, the longer range climate models say the dry pattern may last until the last week of February as both the CFS (image below) and 45-day ECM EPS (two images below) show at least some troughing developing along the West Coast that could bring storms back to CA.

The CFS has a period of average precipitation that week while the ECM EPS is showing a little green (image below) on the map, but still likely in normal precipitation ranges.   Overall, that is a long ways to wait for the next chance for powder conditions. 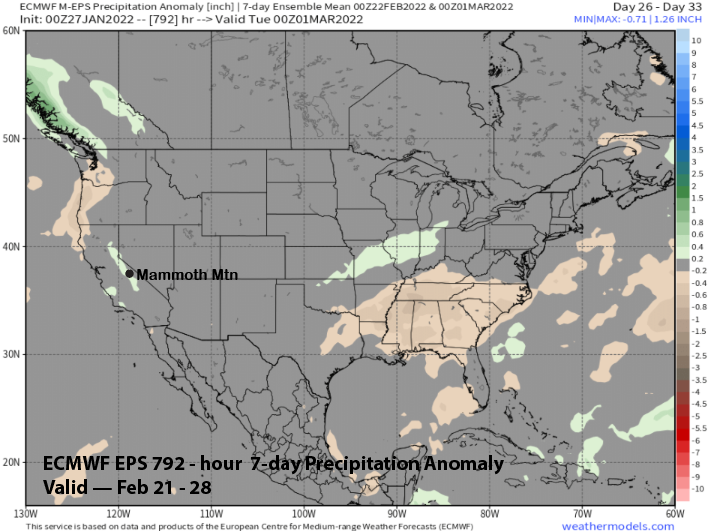 As mentioned in earlier posts, the MJO is still a wild card heading into February as the models are still not in any sort of agreement with the evolution of that signal over the next two weeks.  The GFS ensemble (image below) has now become more bullish that the signal will strengthen and emerge from its current position inside the RMM plot unit circle and into phases 3 and 4 heading into mid-February.  Those are drier phases during the first half of February.

The Canadian model (image below) has it emerging in the even drier phases 4/5 while the ECM does not favor a strong signal and keeps it inside the unit circle or maybe emerging phase 4 at the end of the period. Those models still seem to have a easterly bias, so I rank those solutions last, especially the Canadian.

The only promising solution is the Japanese model (image below) that has the signal strengthening in the more favorable locations of phase 2/3 by the end of the first week.  That model is not as strong with the ridge (two images below) at the end of its forecast period and even suggests a trough may form across the West if the models went out farther in time.

Overall, even if the MJO does strengthen in the favorable phases, there is not guarantee that it will be the dominant mode for mid-latitude teleconnection forcing. Other sub-seasonal signals may destructively interfere and/or override that forcing.  We just have to wait and see. WG