The infrared satellite image (below) today shows high pressure has built over CA and into Nevada with a weak front moving through the PacNW.  That front will move well north/east of CA and high pressure is forecast to hold over CA through the weekend.

The high-pressure ridge will continue to strengthen (image below) through early next week for continued fair and dry weather. Temperatures should warm up with spring conditions likely on the Canyon side of the mountain and softer snow elsewhere.

The longer-range guidance is still looking dismal through the first half of February with still no hope until the latter part of the month.  At least fair weather/sunshine enthusiasts are happy about the forecast as it has been a great year so far for the groomers.

The models continue to strengthen the high pressure ridge over CA through the end of next week (image below) resulting little change in the weather pattern or slightly warmer weather.  Models do weaken the ridge at the back end of the 10-day forecast period (two images below), but dry weather is expected to continue.

The GFS model  does move a closed low southward along the CA coast (image below) around the middle part of next week and does generate some light precipitation (two images below) during its passage. 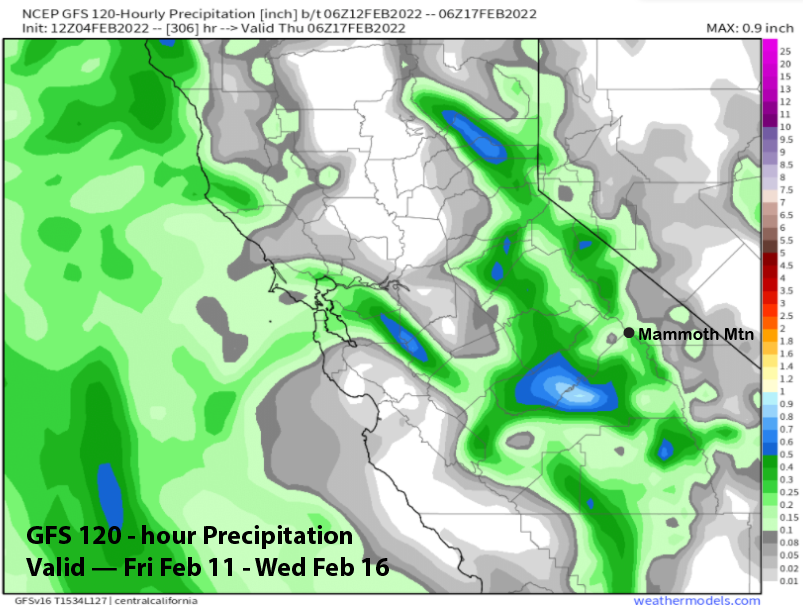 However, it would likely be just dust on crust and not enough for powder if it happened and the GFS ensemble mean supports more of an inside slider type pattern instead (image below). Only a few of the ECM ensembles show this solution and continued dry weather is currently favored.

The longer-range ECM EPS does start to weaken the West Coast ridge right at the very end of the forecast period (image below), so hopefully a pattern change is possible heading into the latter part of the month. 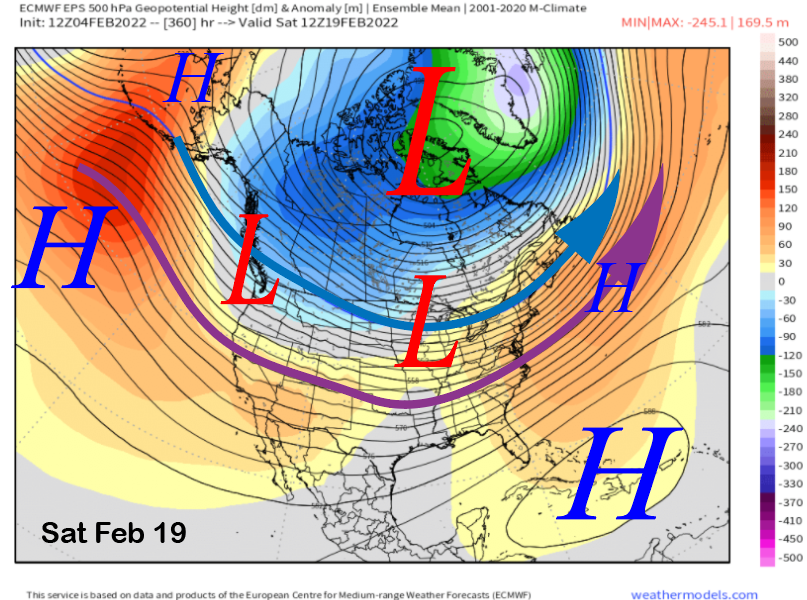 The pattern is being dominated by a deep East Coast trough that is being supported by an up-stream ridge near Alaska. The MJO is starting to show strengthening and is about to emerge in the favorable phase 3, but the CPS says destructive interference for Equatorial Rossby Waves (ERW) is dampening the signal, and thus it is forecast to have little effect on the mid-latitude teleconnection pattern.

Apparently, the pattern of an Alaska ridge is being fueled by ongoing forcing emerging from the polar regions.  An un-coupled Stratospheric Polar Vortex (SPV) to the circumpolar tropospheric circulation during mid-winter has produced a stable pattern across the poles, including that high pressure ridge over Alaska that has blocked all our potential storms for the last month.

Observations indicate that anomalously strong vertical wave propagation has occurred so far this winter between the lower stratosphere and troposphere in the polar regions and has disrupted, but not fully broken, the SPV. Instead, vertically propagating waves are being reflected back downward, building a blocking high near Alaska and downstream troughing across central North America (aka stretched polar vortex events).

This situation is expected to continue through mid-February or slightly longer with a pattern change possible toward the end of the month or early March as the SPV typically weakens heading into late winter or early spring before dissipating by late spring.

Thus, the longer-range climate models such as the CFS (images below) and ECM that continue to show that the dry weather transitioning to wet over the last week and through early March is believable.  After all, as I mentioned in the last post, mid-winter dry spells don’t last longer than 50 or so days even in the driest of winters. WG 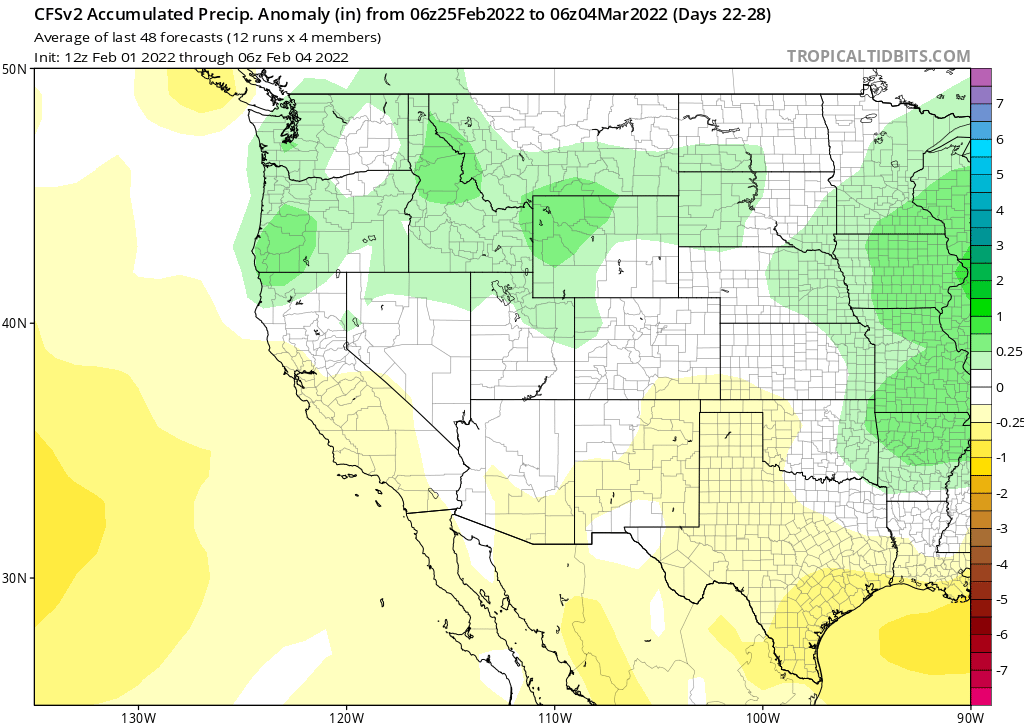 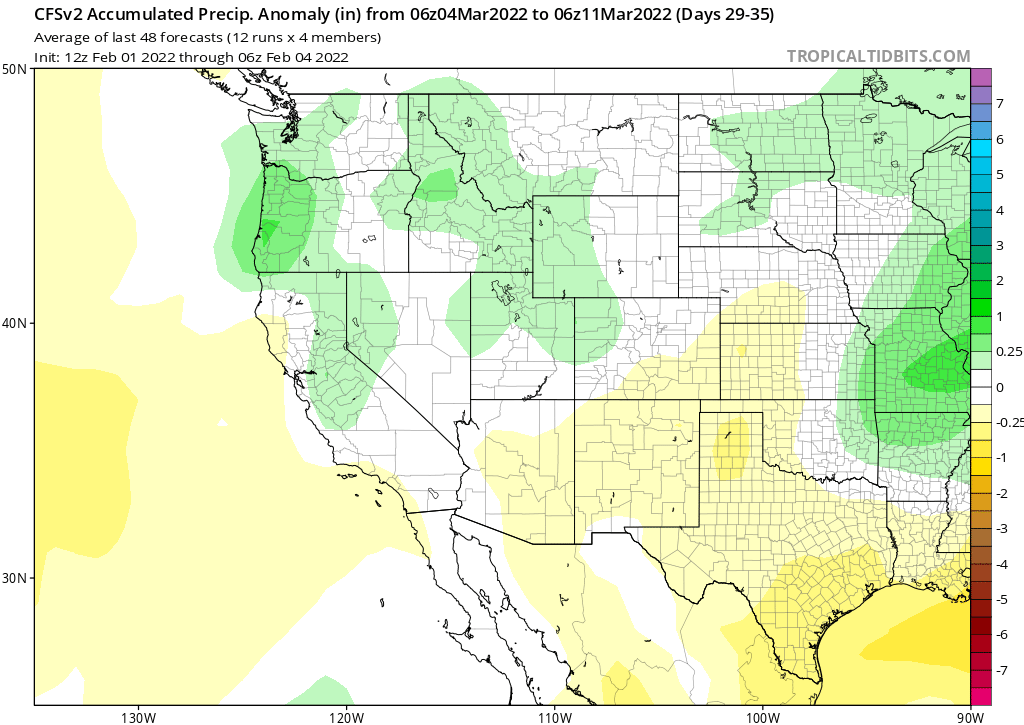