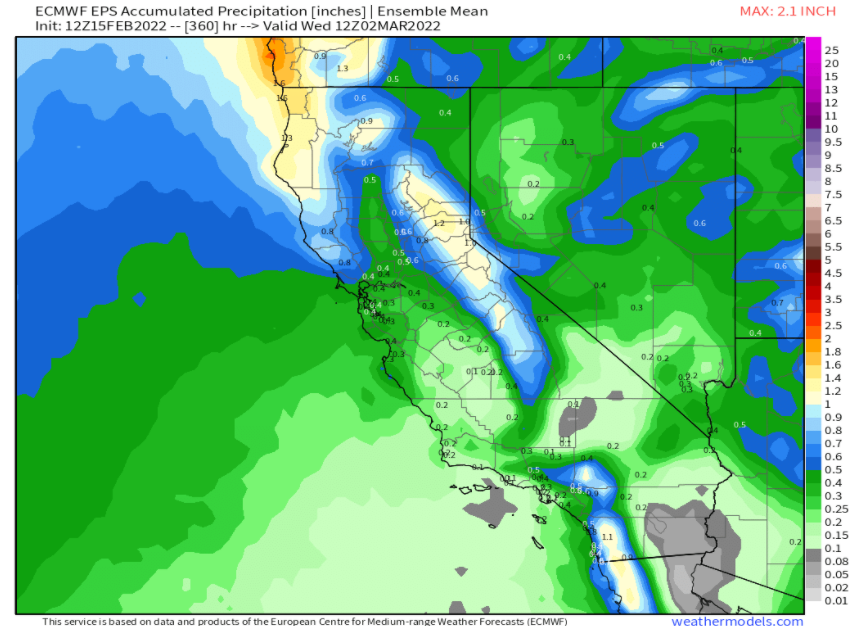 The infrared satellite image (below) today shows a weather system is currently moving through Central California and southward into SoCal with clouds across the eastern and southern part of the state.

There has also been some snow showers across the Sierra today and it was briefly snowing heavily on the mountain this morning as seen by the screen grab from the Unbound cam (image below). 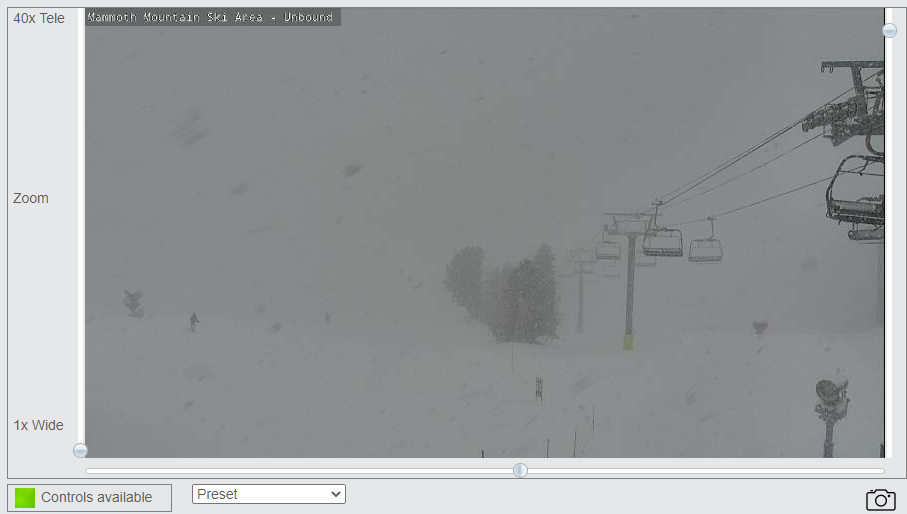 However, only about an inch or two has fallen so far and maybe an inch more could fall by this evening when the snowfall ends. Models are generally only showing about a tenth of an inch of liquid or slightly more with the event (images below). 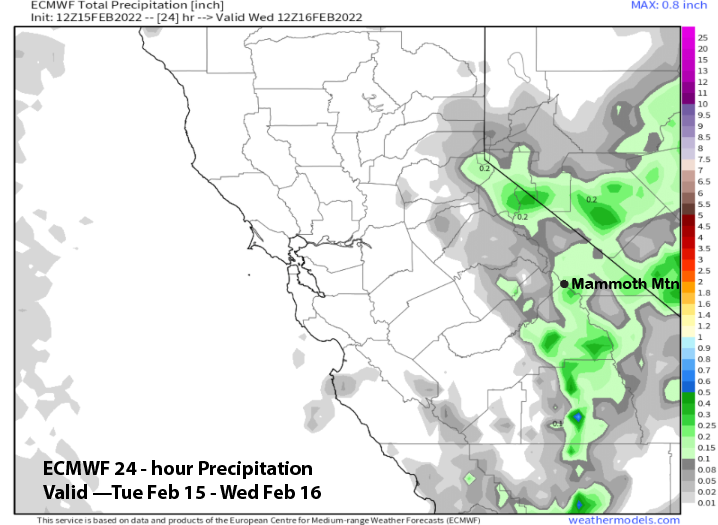 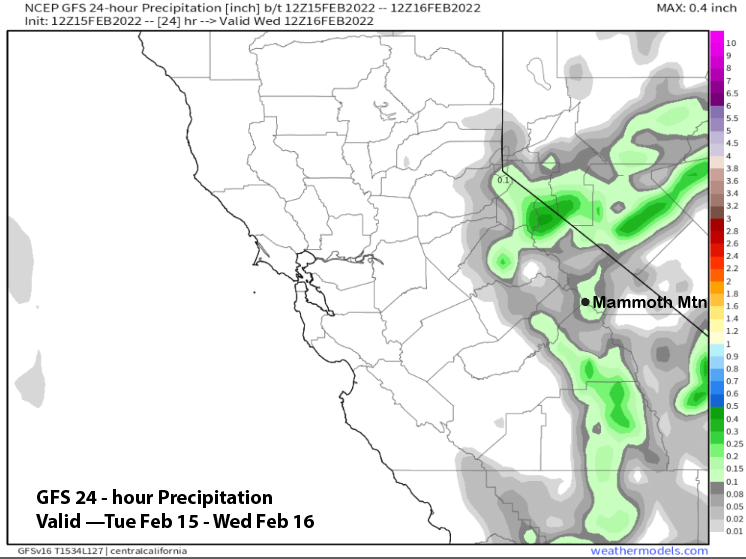 Weak high pressure will then build into the state by the end of the week with a very weak cut-off low possibly moving through the area on Friday night or Saturday (image below).  It should have little effect on the overall weather with dry weather continuing.

The longer-range guidance is still looking mostly dry through the end of the month, although there is another chance for snowfall.

The models are in general agreement that a deeper trough of low pressure will move southward into CA around late Sunday or Monday (image below) next week, but only slightly farther westward than the current storm and will again lack good moisture.

The ECM (image below) and Canadian models develop a closed low over central or southern CA around Wednesday next week while the GFS model is a bit more progressive and moves it eastward faster.

All the models now develop light snowfall amounts with the initial passage of the upper low with the ECM total amounts slightly higher (image below) versus the more progressive GFS (two images below). 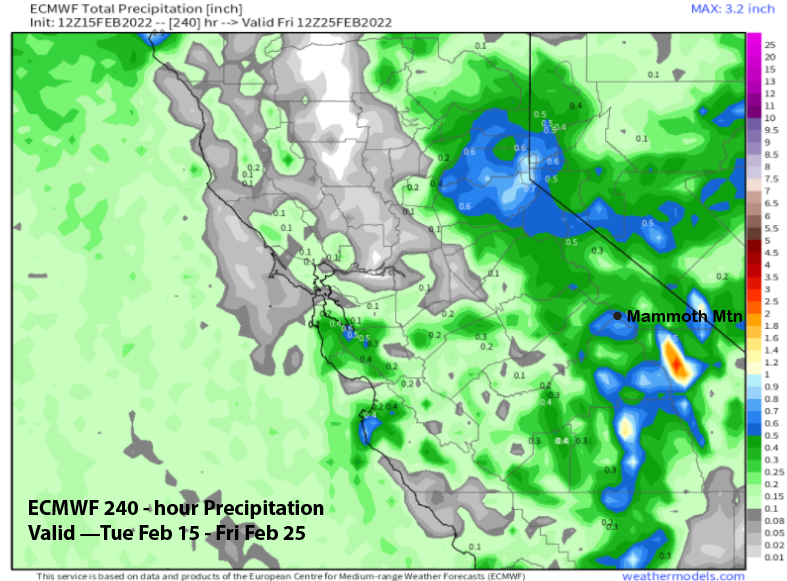 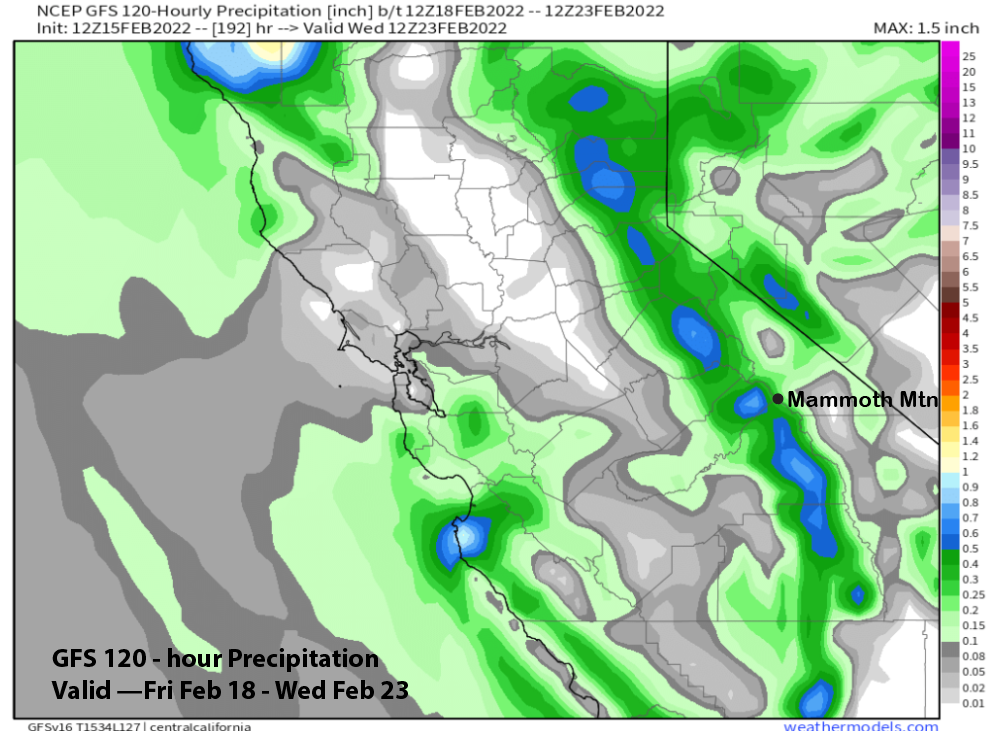 The higher ECM amounts at over half an inch liquid may be enough for at least low-end powder conditions.  It is still many days out, hopefully, the QPF will trend higher.  But this certainly is the best chance for at least some powder since late December.

The GFS ensemble keeps a weak long-wave trough southwestward into SoCal in the extended period at the end of the month (image below) that would support more inside slider systems.  The ECM is more progressive and shows weak ridging over CA and stronger ridging extending northward over British Columbia, farther eastward than the GFS ensemble below.

The ECM model (image below) keeps a similar pattern ongoing into early March with only weak hints that there could be a breakthrough of the westerly jet underneath a ridge situated in BC/Yukon territory.  That model is favoring another rather deep trough for the East Coast with the GFS having that trough farther west over the MidWest. 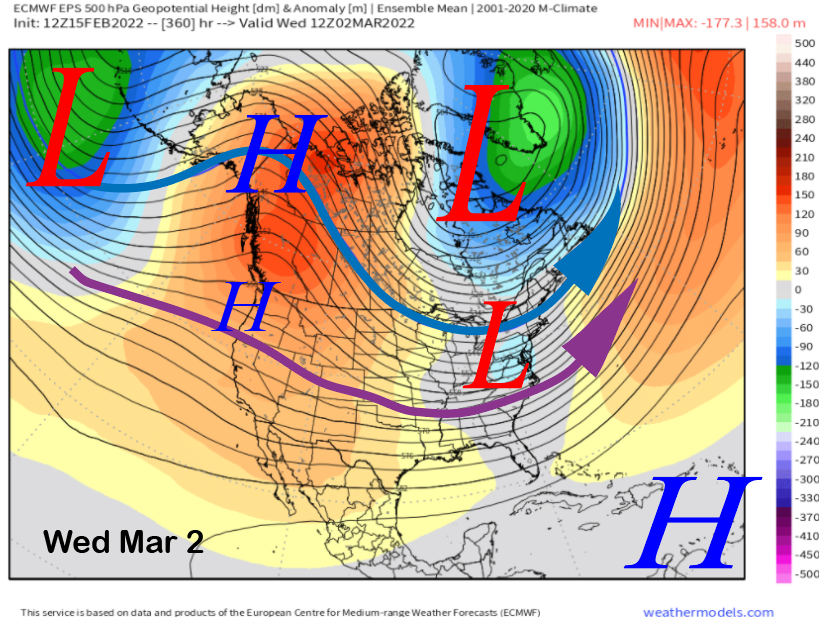 Overall, unless there is a surprise next week, it is looking fairly dry through the end of the month and into early March.  The long-range climate models keep dangling the wet period “carrot” in the super extended forecast, but once again, it has been moved back a week until the second week of March now.  It should happen sometime in March, or this will end up being one of or the driest January through March periods on record. WG