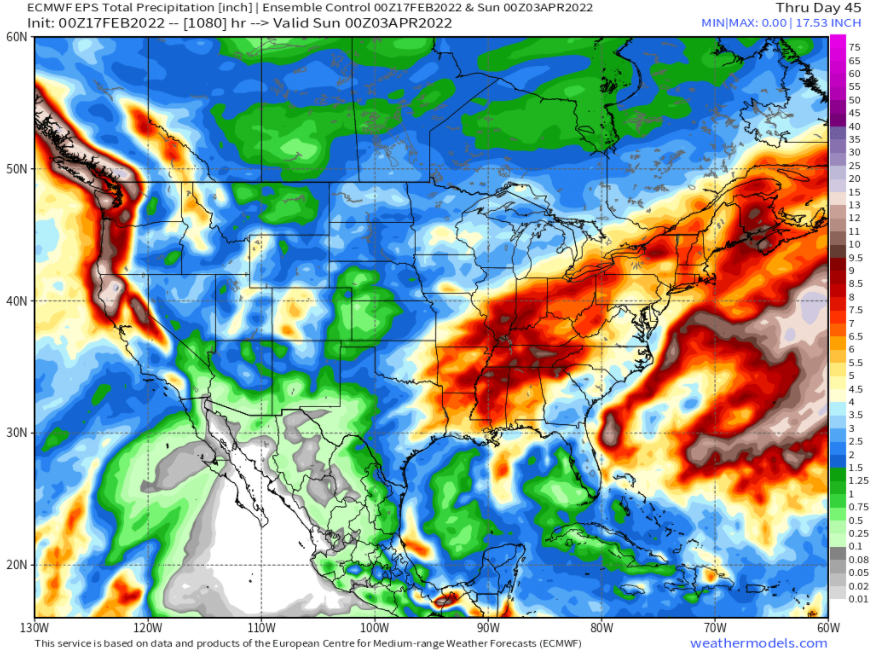 Sat 2/19 through Mon 2/21 – No snowfall expected all days except for a chance for flurries Monday and light snow overnight Monday. Accumulations 1 – 2” by Tuesday morning.

Tue 2/22 – Snowfall is possible during the day and Tuesday night.  Accumulations 4 – 8” by Wednesday morning.

The infrared satellite image (below) today shows a very weak weather system is currently moving southward off the coast of CA with high pressure generally in control of the weather across the West Coast.

Weak high pressure is forecast to hold through tomorrow before a weather system moves southward from BC/interior PacNW and into CA on Sunday (image below) and into Monday. That initial system will produce colder temperatures and gusty winds, but probably only flurries on Monday afternoon.

A stronger trailing upper-level low pressures system will then move into the state on Tuesday and into Wednesday (image below) for a return to winter-like weather and also some snowfall.  It doesn’t have a lot of moisture to produce big snowfall amounts, but there will be enough moist upslope flow for at least light and hopefully moderate amounts.

Models are showing between a quarter and half an inch of liquid for the event with the ECM showing about 0.40” (image below) and the GFS a bit less (two images below).  However, due the cold nature of the weather system, snow ratios will be higher than normal and could approach 20:1 as snow levels will be in the 2-3000 foot range Tuesday PM before falling some more Tuesday night. 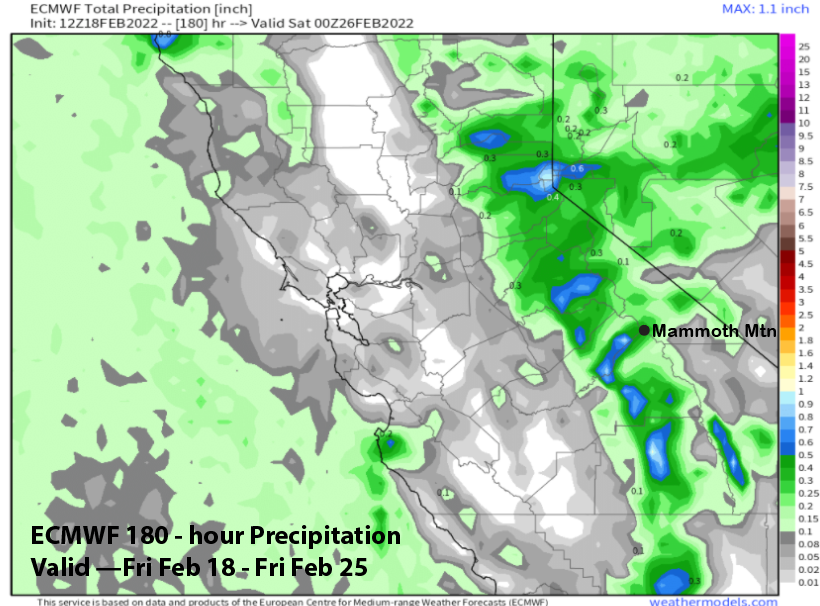 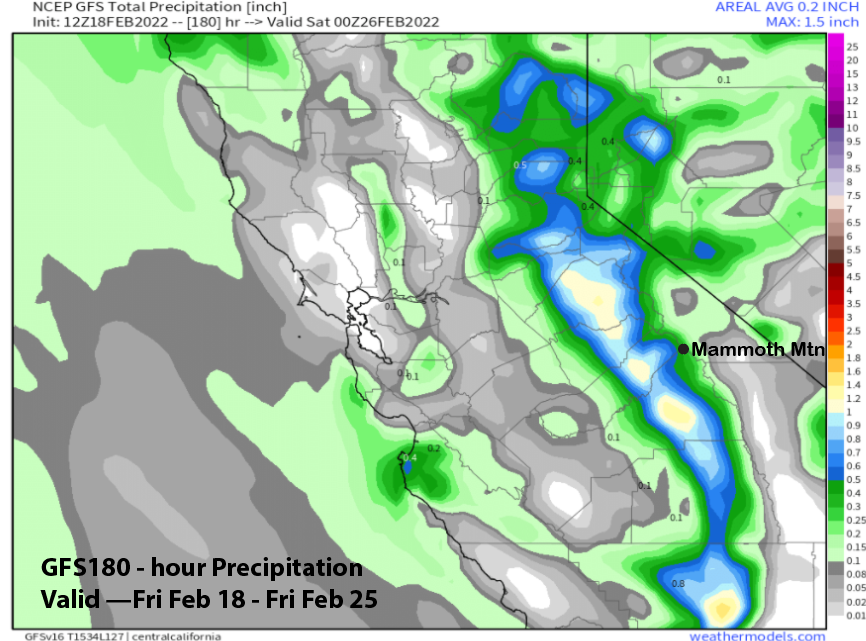 Thus, there could be 4-8 inches of total snowfall from the storm by Wednesday morning.  Most of the snow will fall during the day Tuesday with it possibly starting early during the morning.  Flurries or light snow showers could continue through Wednesday PM. While it might not be deep powder, there is a good chance for at least low-end powder conditions.

The longer-range guidance has trended a bit more favorable for early March, although I am not completely sold on big snowfall yet.

High pressure is favored by the models to build back into CA toward the end of next week (image below) and into the following weekend for a return of dry weather along with warmer temperatures.

The GFS (image below) and ECM ensemble means then show the ridge of high pressure moving eastward and a trough of low pressure developing in the Gulf of Alaska where that ridge has mostly been parked for the last month and a half.  It does move a wave into the PacNW around Monday, but likely too far north for any snowfall in Mammoth.

The longer-range fantasy guidance has trended more favorably over the last few runs.  The GFS ensemble mean is now favoring a long-wave trough to develop along the West Coast during early March (image below) with the jet stream extending southward into CA.  It deepens the trough a bit heading into that first weekend (two images below) that would certainly allow storms to move into Mammoth.

The ECM ensemble is not quite a bullish or deep with the long-wave trough and shows a weaker version of what the GFS ensemble is forecasting. Regardless, that model also increases precipitation across CA during early March as reflected by the total period QPF (image below) that has increased since the last update, although it is still not showing huge amounts. 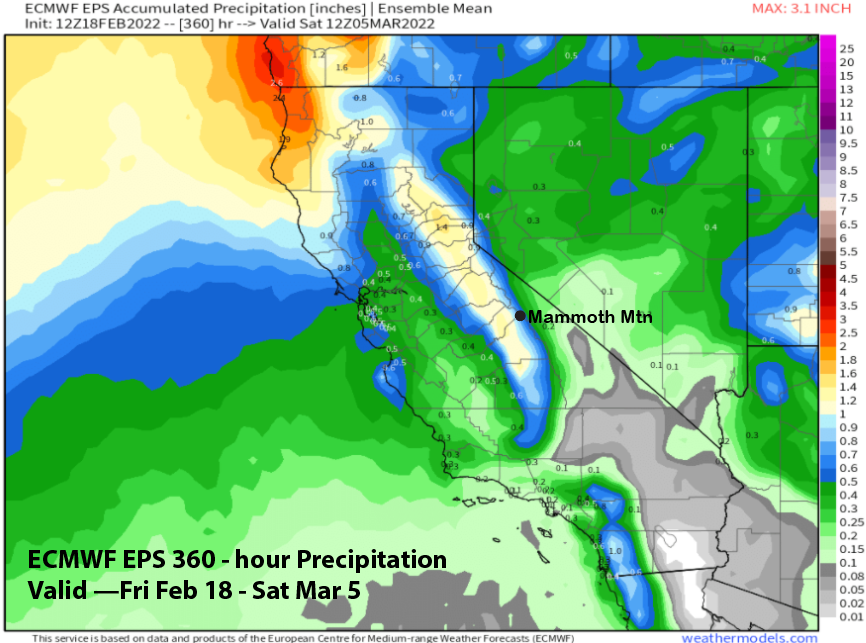 The ECM climate model released yesterday does show precipitation increasing into mid-March and the control run is now showing a pretty good month overall (see cover image).  The CFS is also showing decent precipitation for March across California too with Mammoth seeing average amounts (image below).  The wait is almost over. WG 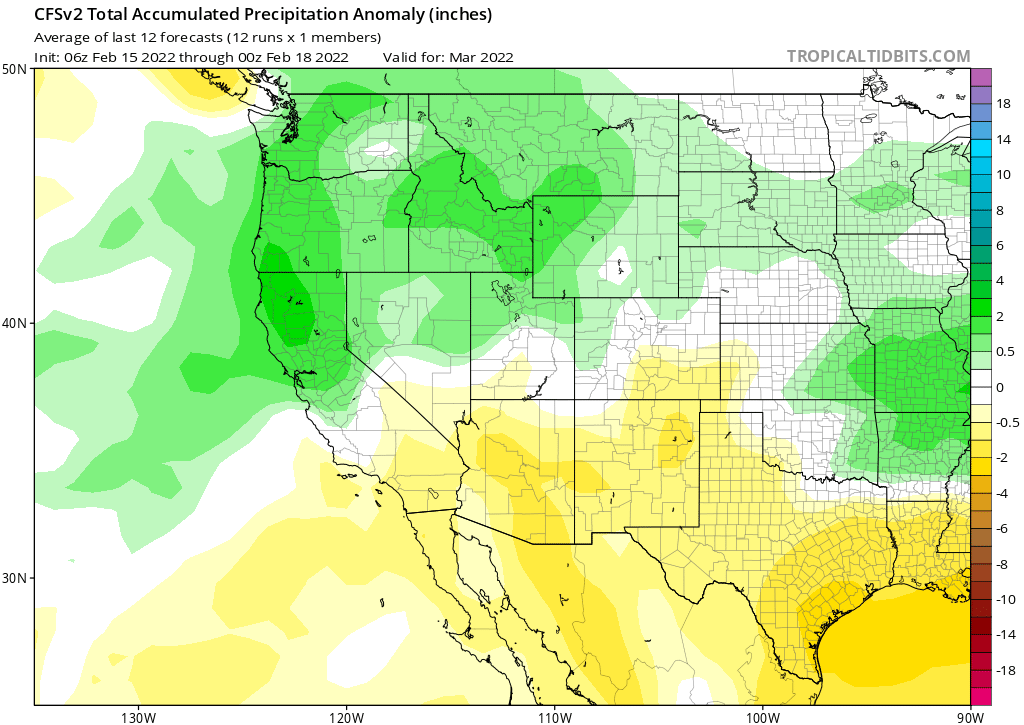 Recreational Weather for Mammoth Mountain and the Eastern Sierra