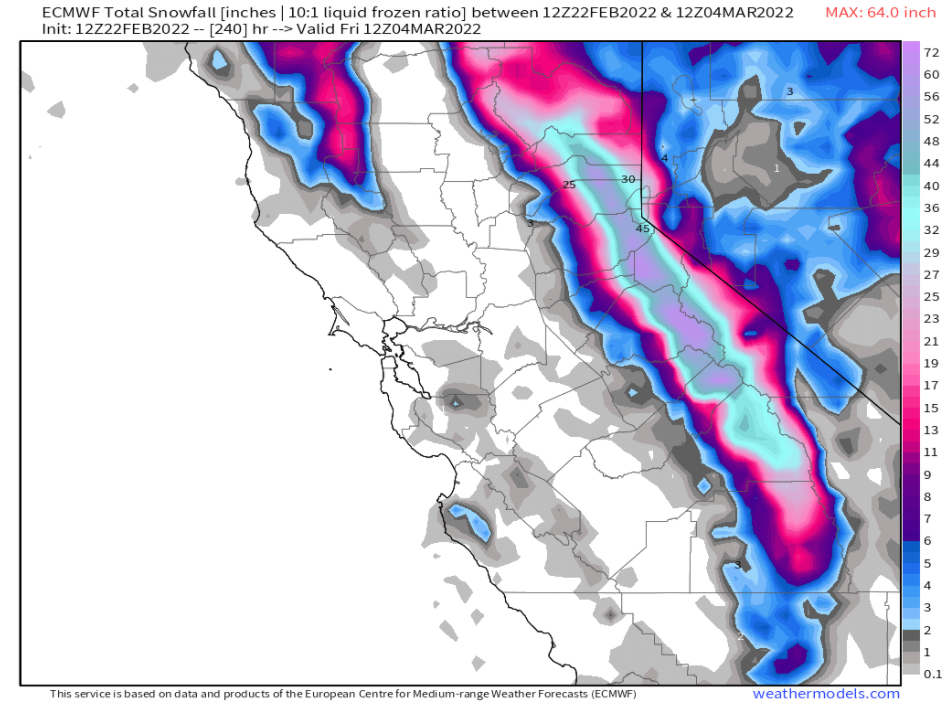 Wed 2/23 through Sat 2/26 – Except for a chance for flurries Wednesday (no accumulation), no snowfall is expected through Saturday

The infrared satellite image (below) today shows a deep upper-level low pressure system situated over Central California with clouds and showers across parts of the state.  It is a cold storm with temperatures today on the mountain mostly in the teens under the light snowfall as it also moisture starved.

Models keep the light snow ongoing through this evening before the snowfall is forecast to taper off by tomorrow morning followed by only flurries during the day.  ECM model is showing the highest liquid amounts at around 0.40” (image below) while the GFS is showing less at around quarter inch (two images below) 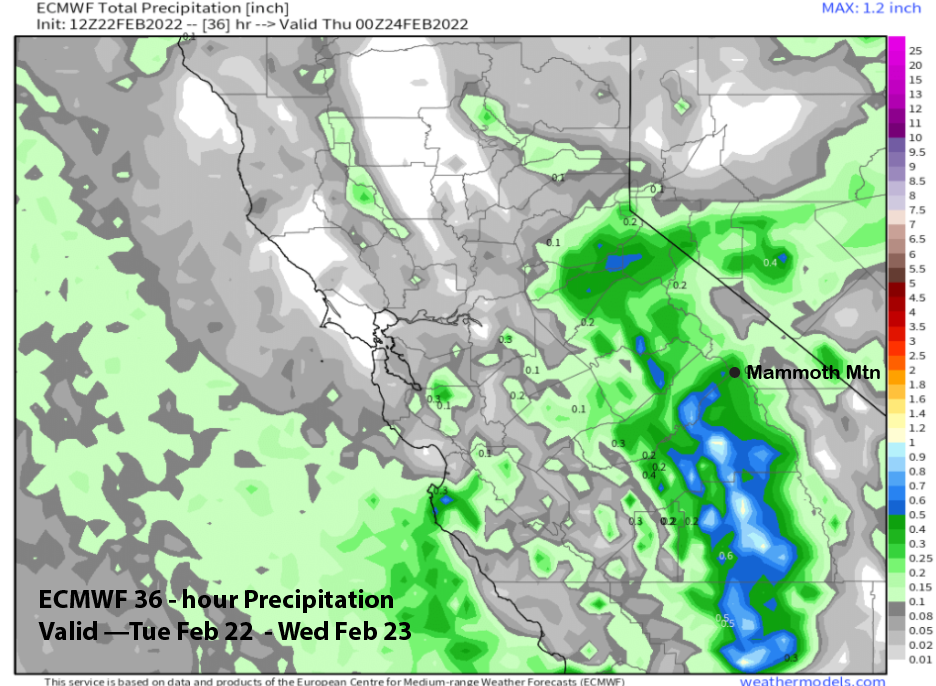 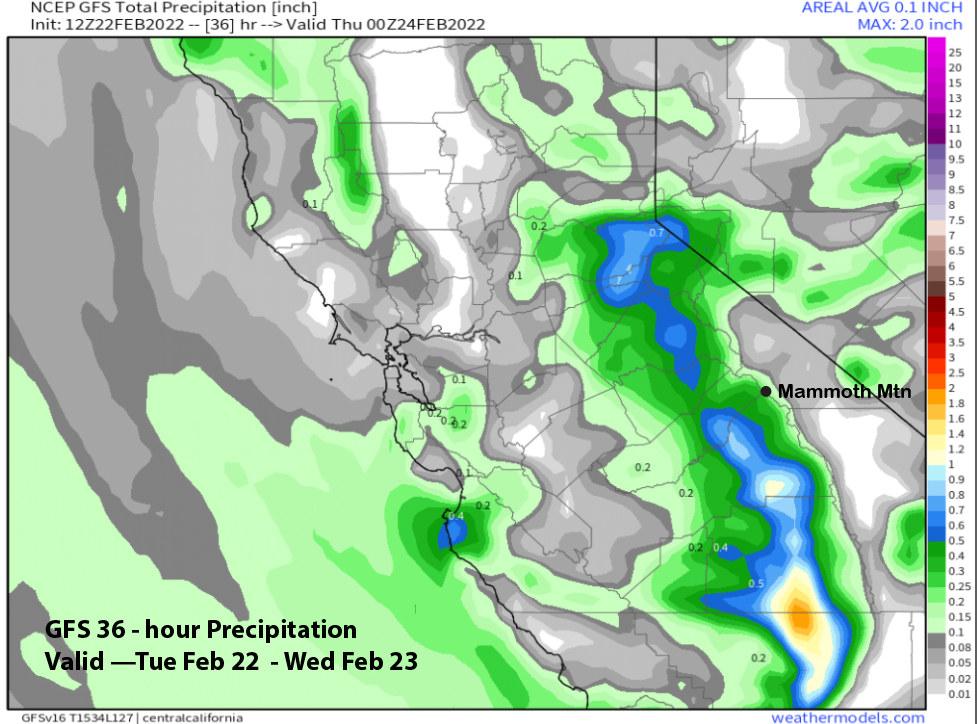 Based on the poor orographic orientation of the upper-low (northwest instead of west or southwest), the forecast follows the GFS model with around 0.25” total.  But with snow ratios around 20”:1”, that should be good for around 5-6” total at Main and probably up to 8-9” up top.  Due to the light and dry nature of the snow, it will blow around and there will likely be larger stashes and also areas scraped clean.  This is also the type of storm where Eagle/Canyon will see a lot less versus the top and backside where the powder will be deeper tomorrow.  Ch. 14/Hemlocks should be fun tomorrow and is where I would prioritize.

Another weaker upper-low will move into the Sierra on Friday (image below) with the main affect likely just keeping temperatures seasonably cold (teens/20s) and also an uptick in northeast winds.  Weak high pressure will build Saturday with temps warming up to seasonable, but still winter-like, levels.

The longer-range guidance continues to trend more favorable for at least the first part of March with still some uncertainty about how it will play out.

The ECM model (image below) is currently the most aggressive about holding a short-wave together upon landfall into NorCal on Sunday with the other models mostly washing it out. Nonetheless, it would only result in an inch or two of snowfall anyway and not powder.

The ECM model is also the most aggressive about the strength of a weather system for the middle/latter part of next week. The latest run moves a rather deep trough through CA starting on Wednesday (image below) before it exits the state on Friday (two images below).

That model has a weak/moderate Atmospheric River (AR) associated with the trough and produces some pretty good liquid totals (image below) with its passage with Mammoth almost getting 4”.  That would translate to easily two feet plus of snowfall. 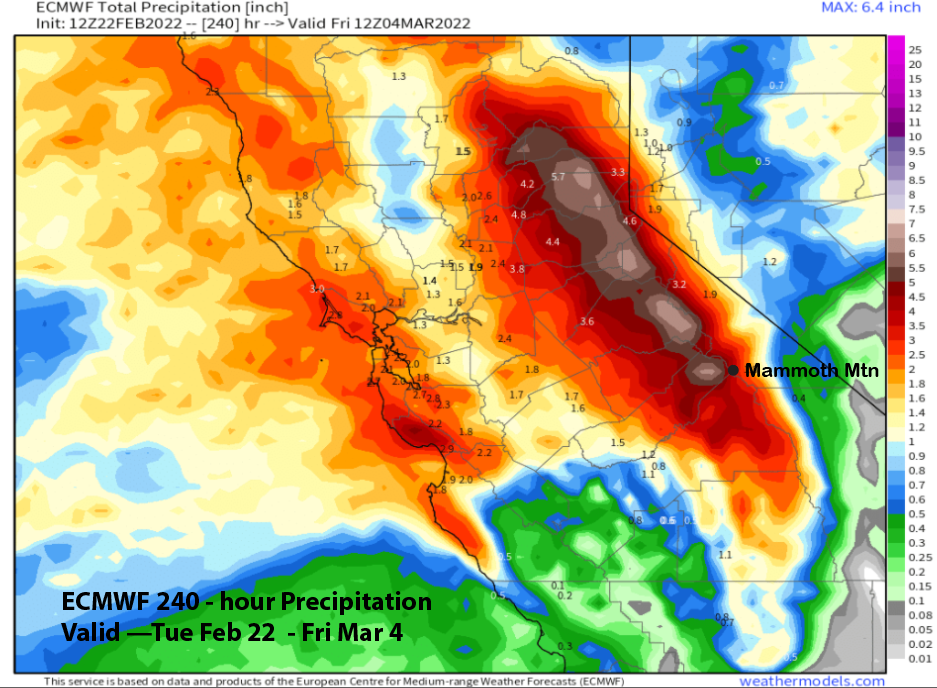 However, the GFS model (image below) is much different.  It has it weaker and much farther to the north and its latest run produces no precipitation in Central California. The Canadian model is slower and in between strengths of the GFS/ECM, but does move it farther southward than the GFS.

Current forecast follows the ECM ensemble mean that is actually fairly close to the GFS ensemble mean (image below), that unlike the operational model, is showing a trough and jet stream into CA around the middle/latter part of next week.  Thus, there is a decent chance for at least low-end powder conditions as early as Wednesday, more probable toward the end of next week.

The GFS ensemble shifts the long-wave trough eastward over the following weekend (image below) and there should be a period of dry weather.  The northerly flow will keep temperatures seasonably cold on the mountain.

The longer-range fantasy guidance (image below) is in pretty good agreement that a long-wave trough will form along the West Coast under a building ridge of high pressure in western Alaska or the Aleutian chain.  Under this scenario, the trough would allow storms to have enough over-water trajectory to produce at least decent amounts of snowfall that would result in powder days. 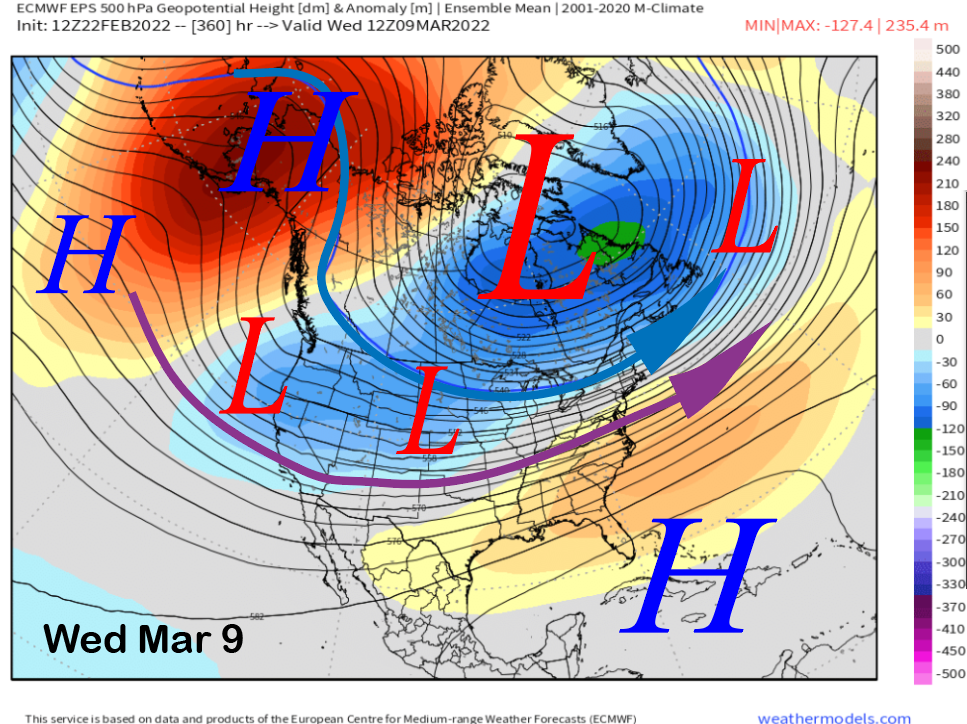 That is what the ECM EPS total precipitation forecast is suggesting with amounts still not overly impressive through the period at under 2” liquid (image below).  But the trend of late has been more favorable with amounts increasing a bit with almost every run.  Fingers crossed. WG 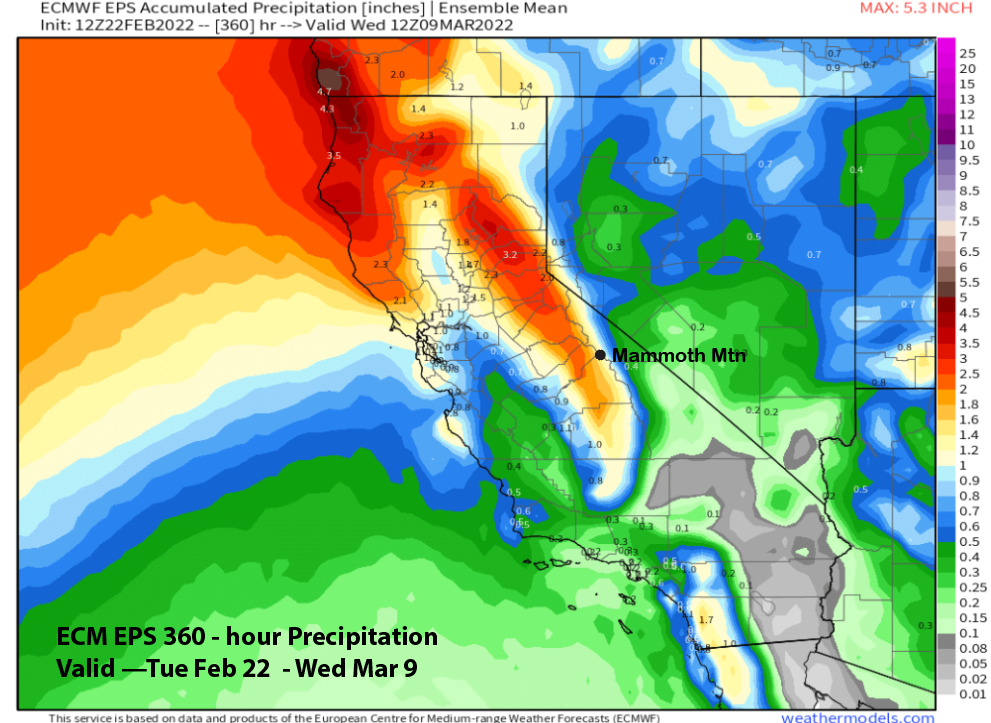 State of The Inyo from the National Forest Service