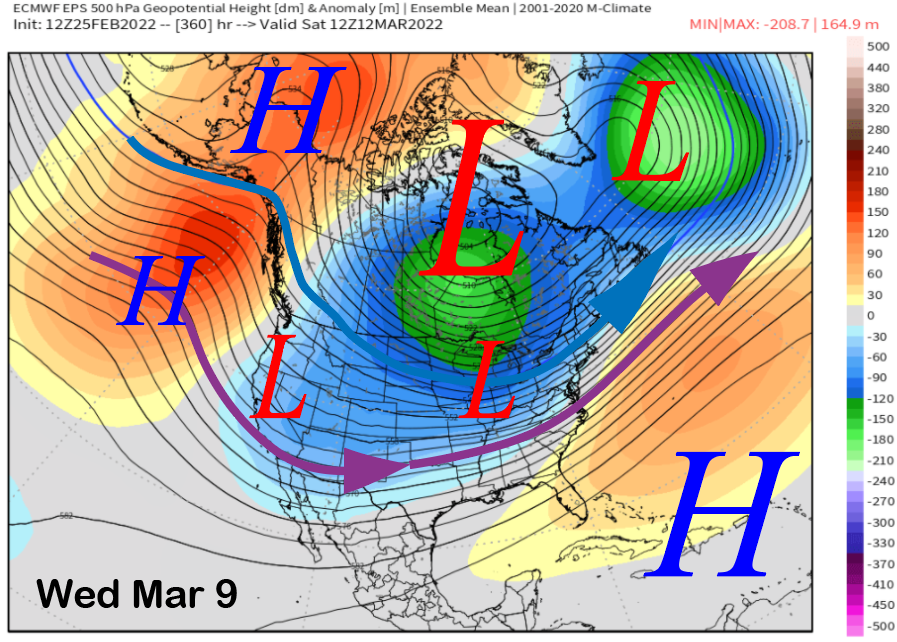 The infrared satellite image (below) today shows high pressure off the coast and north of CA that will move over the state and West tomorrow out ahead of a weather system associated with lots of cloudiness across the eastern Pacific.

That weather system will weakly move into far NorCal and the PacNW on Sunday (image below) and only passing high clouds should be expected in Mammoth.

High pressure will build into CA in the wake of its passing resulting in continued dry weather along with warmer temperatures.  While it will stay winter up top, spring conditions are expected on the Canyon and Eagle side of the lower mountain by Monday and especially Tuesday.

The longer-range guidance has now flipped back to not as favorable for the first part of March and even into mid-month, cementing the idea that this season will go down as one the of worst mid-winter powder seasons on record.  With no more precipitation expected through February, the combined months of January and February will be the driest on record for the entire range of the Sierra.  These records go back for 100 years or longer in the case of the Central Sierra (1913).

Continuing that trend, the model guidance has generally backed off on the strength/QPF for the system toward the end of next week with just a weak system possibly moving through CA per the latest ECM run (image below). That model went from showing multiple inches of liquid precipitation in the last post to just a couple tenths of an inch now (two images below). 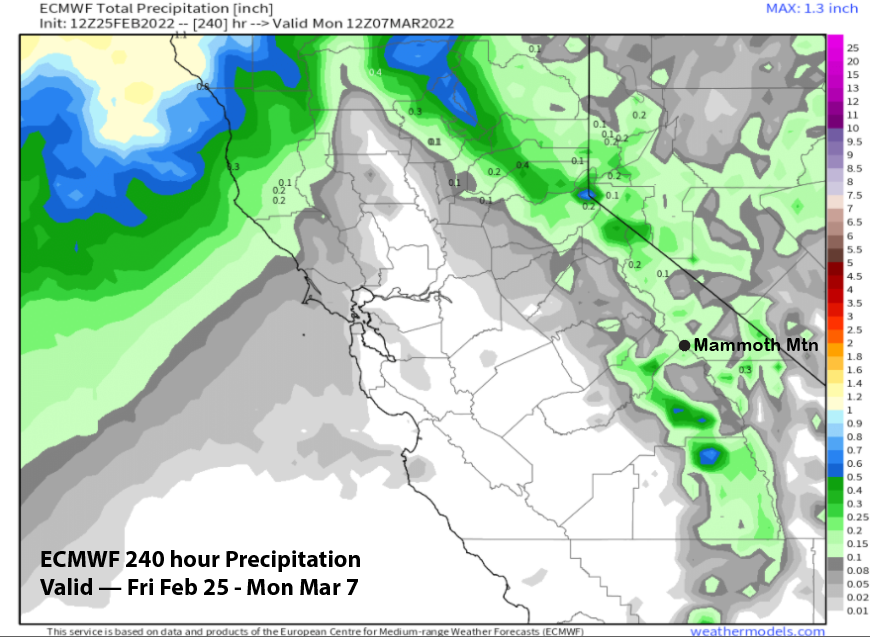 The only model showing even noticeable amounts is the Canadian (image below) that is stronger and farther south with the trough.  It has about 0.75” liquid that would be enough for at least low-end powder conditions.

A handful of the ECM ensembles show a similar solution, but the vast majority favor the weaker solutions.  Current forecast favors only an inch or two, starting on early Thursday and continuing during the day.  I don’t thing it will be enough for powder conditions.

A kicker low will move into CA from the north over the weekend (image below) and that may keep light snow showers in the forecast, better chance for just colder temperatures and windy conditions.

The longer range 11-15 day guidance continues to keep the long-wave trough just east of CA (image below) and a high pressure ridge in the Gulf of Alaska northward into Alaska.  That would mean weak systems moving into CA out of the north and likely cold plus moisture starved.

The guidance mostly keeps this pattern in place into the second weekend of March, although the GFS ensemble (image below) does try to move the trough axis farther westward that would allow storms to have better over-water trajectory.  The ECM EPS (two images below) does not flatten the trough like the GFS and keeps a similar pattern described above in place.

Overall, there is a chance for at least low-end powder days during this period, especially toward the end of that week and closer that the second weekend.  Both the GFS ensemble (image below) and the ECM EPS (two images below) are showing just under an inch, so there could be a weak event or two. 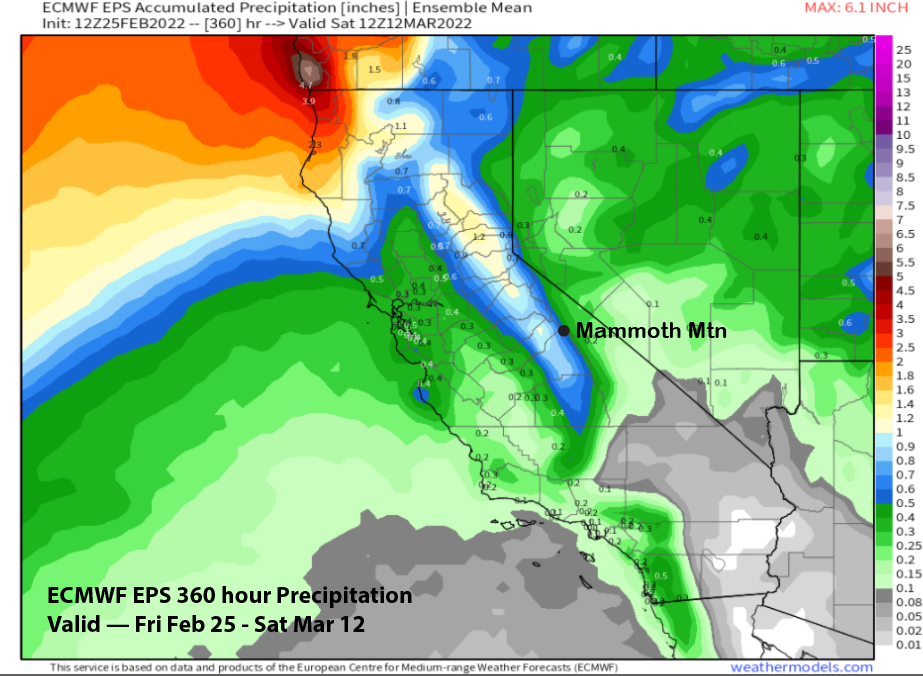 Beyond the second week, the CFS model continues to dangle the chance for a wet period during week 3 (image below), although that model keeps shifting it farther out into the future with almost every run.  It is showing average precipitation for Mammoth that week that would probably equate to around 15” of snowfall. 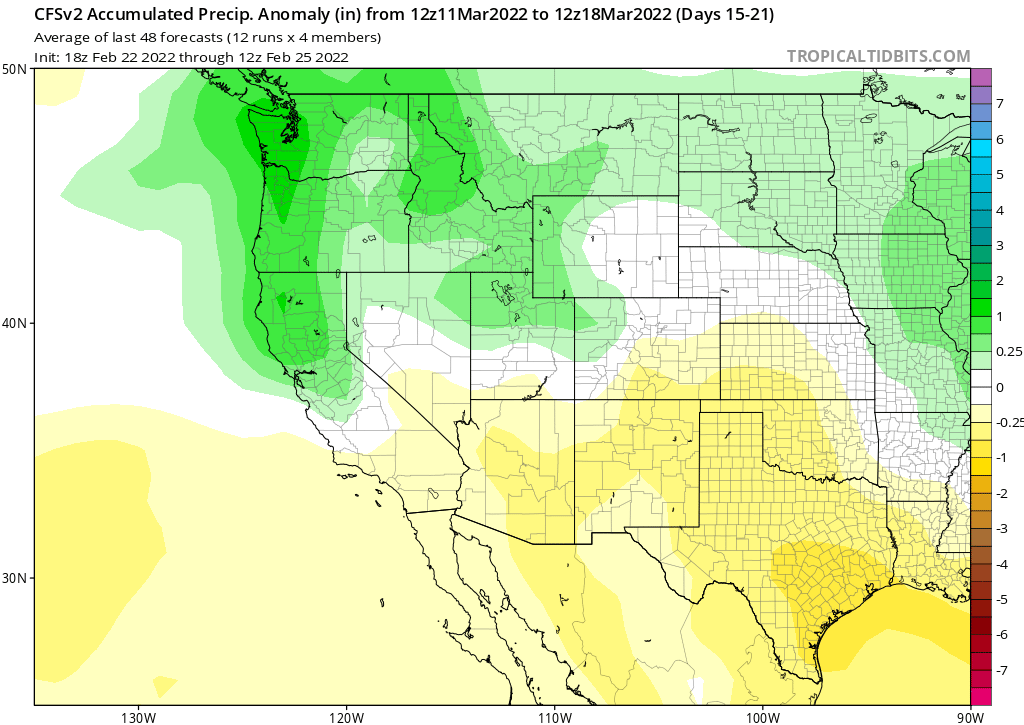 It certainly could happen, as there are now signs that tropical forcing from the MJO could start to play a more prominent role with mid-latitude teleconnections forcing after being mostly dormant over the last couple of months, even after emerging as a coherent signal in phase 3 earlier this month.

The latest run by the ECM (image below) has the signal emerging in phase 5 late during the first week of March and then remaining mostly in phase 6 for the rest of the month.  The other models are similar with the trajectory of the MJO, but differ on the strength.

If it does take that path and influence the pattern in the mid-latitudes, then average precipitation forecast by the CFS model during the second week of March is supported by historical MJO analogs (image below- see black box and arrow).  Unfortunately, if it stays in phase 6, then March will probably not be a big month with slightly below average snowfall more likely.  Good news is that slightly below normal precipitation will still mean at least some powder days.  WG 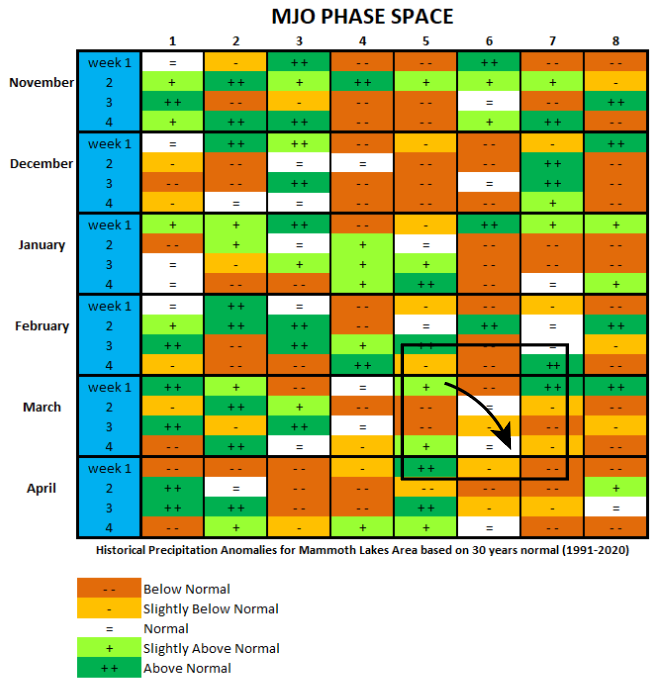