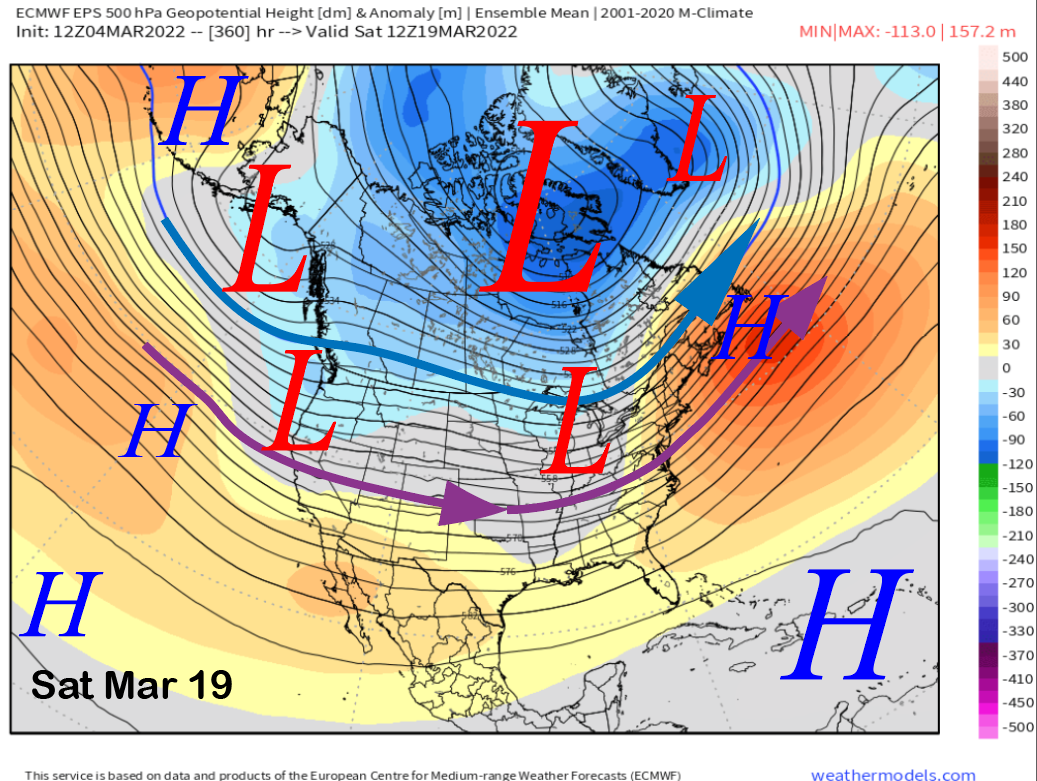 Sat 3/5 – Snow showers will increase again the day before ending late evening hours.  Accumulations 2 – 3” by Sunday AM, 4”+ up top

The infrared satellite image (below) today shows a low-pressure system exiting the state into Arizona while another one is currently entering NorCal.  The cold front associated with the one entering NorCal will move through Mammoth overnight before the upper-level low still off the coast moves through the Sierra during the day tomorrow and into tomorrow evening.

Snowfall will increase tonight before briefing ending late tonight and/or early tomorrow.  It will then begin again during the morning hours and should increase during the afternoon before ending late evening. The second pulse will be associated with colder temperatures and should be dry and fluffy snowfall as snow levels will lower to 2000 feet.

The GFS model is the wetter model (image below) showing over 0.75” for the mountain while the ECM model is showing less at around 0.50” liquid (two images below). Forecast follows closer to the ECM model as this system doesn’t have a lot of moisture to work with.  Regardless, it should be enough for at least low-end powder conditions with tomorrow another riders of the storm day, this time with a powder base, as 4-6” of snowfall is expected today/tonight. 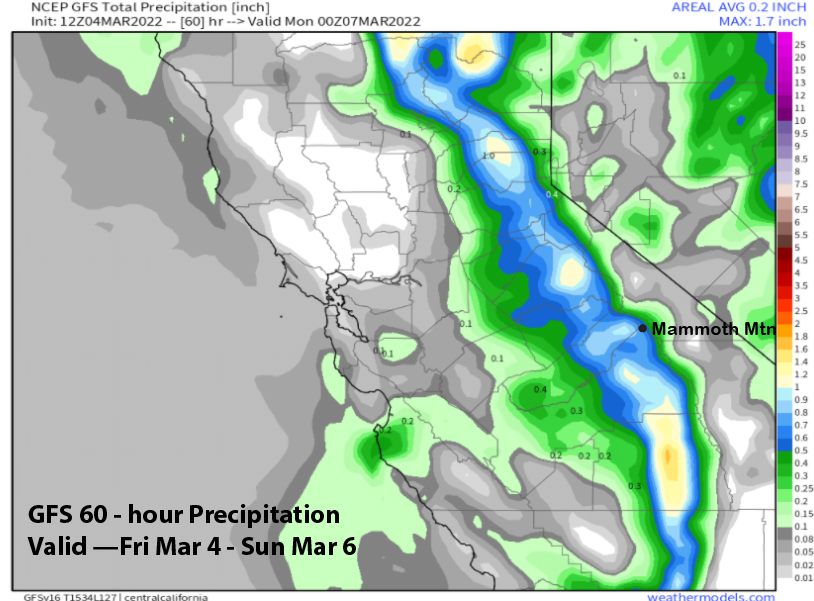 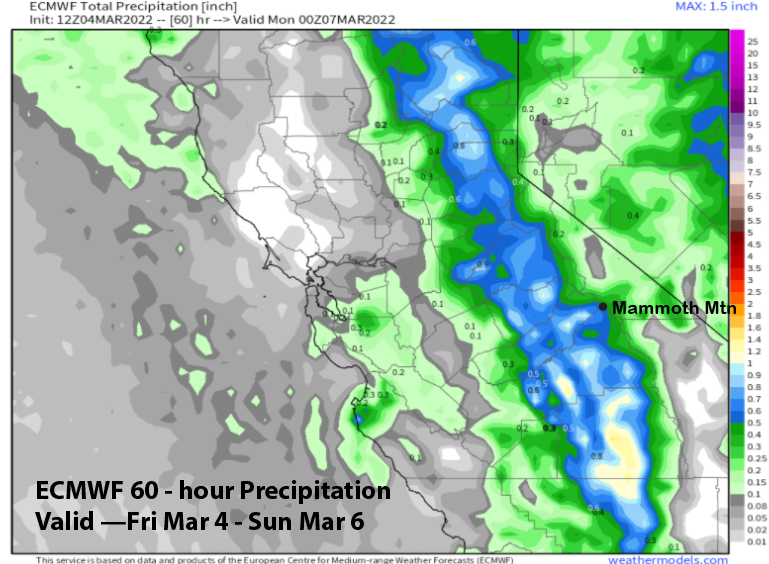 The longer-range guidance is not great through mid-month with the second half of the month our last chance for something good before the powder season starts to wind down in April.  It appears we will make it through the heart of the winter months (Jan into mid-March) without a bigger storm (>1” liquid). That has never happened in my forecasting career (25 years), although 2014-15 was close, but at least that year had a bunch of weak storms.

The models move a ridge over CA into mid-week before an upper-level trough will move southward east of the Sierra and into the mid-section of the country (image below). If it moves southward far enough westward, there could be some light snow showers, otherwise, probably just colder temperatures and wind.

Longer range GFS ensemble members favor the ridge to rebuild end of next week with a trough moving north of Mammoth and into the PacNW/NorCal over the following weekend (image below).  With another deep trough in the MidWest again for the 7th time since mid-January (that is the primary reason for our dry weather), I would not be surprised if the West Coast ridge ends up more amplified.

The 12Z run of the GFS operational model is a little farther southward with the trough and does have some precipitation moving into Mammoth (image below) that could add up to a few inches, but likely not deep powder.  Current forecast favors just a chance for snowfall with a better chance for continued dry weather. 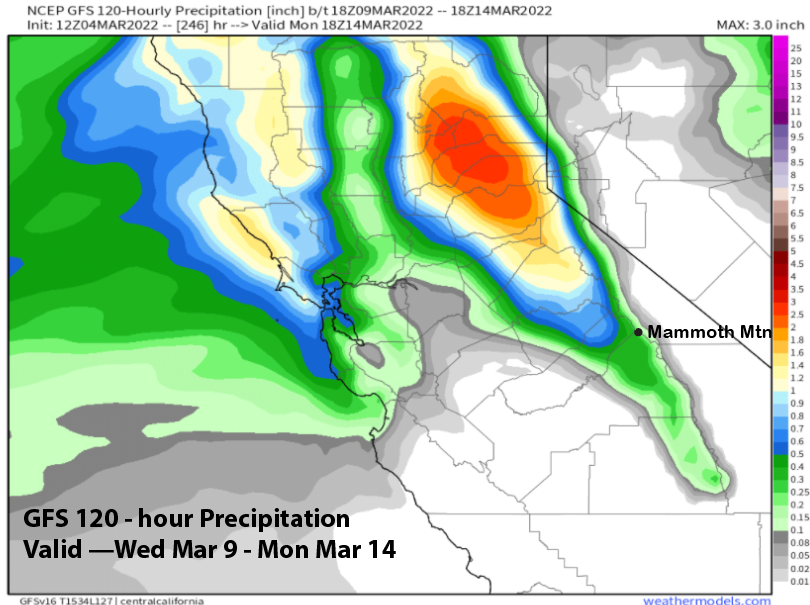 Another trough may move into CA early over the following week and the ensemble mean suggests the jet stream may be farther southward (image below-purple arrow) resulting in a better chance for meaningful snowfall.  Let’s hope so as that model favors ridging to return toward the end of that week (two images below).

Beyond that, if another deep trough doesn’t form across the mid-section of the country, then there is a chance that long-wave trough could occur along the West Coast.  Both the GFS (image below) and ECM (two images below) suggest that scenario could unfold, although the ECM is still not showing big precipitation yet (three images below). However, the models have said this before, only for the trough to end up much farther eastward into the MidWest, and we end up dry. 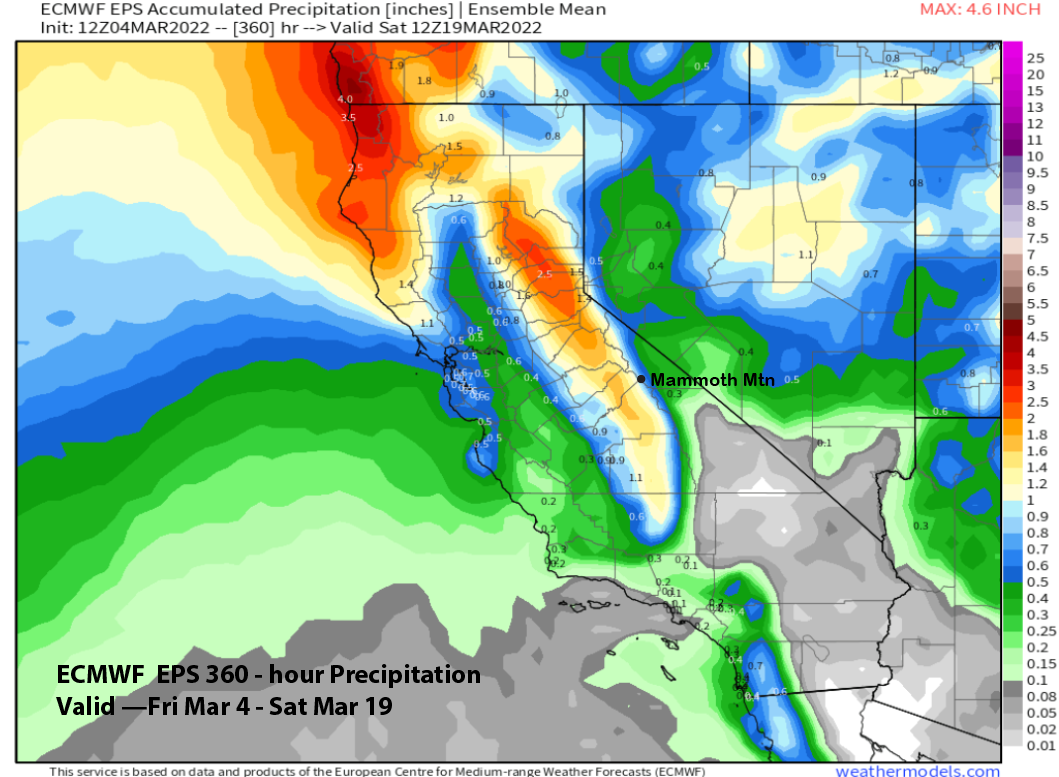 There is one thing in our favor this time though.  The Stratospheric Polar Vortex (SPW) that has remained consistently strong all mid-winter is expected to become disrupted next week as shown by forecast warm/positive polar cap geopotential height anomalies (image below-red circle).  So hopefully that will lead to a different and more favorable teleconnection pattern (e.g. deep West Coast trough) for the latter part of March.  That is what the CFS model is predicting (two images below), fingers crossed. WG 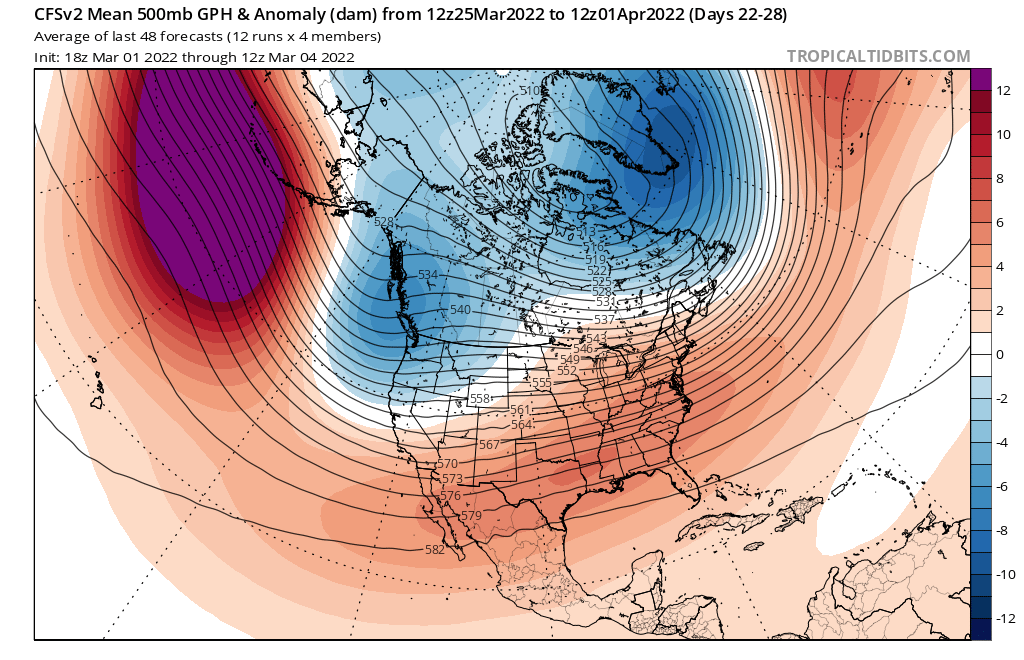