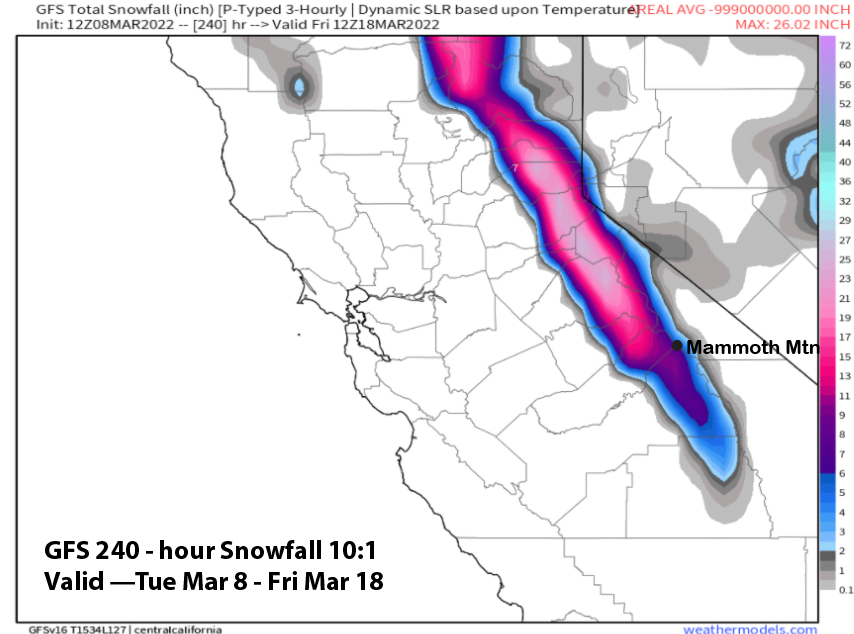 Wed 3/9 – Slight chance for flurries during the late afternoon or evening followed by a chance for light snowfall early Thursday, accumulations less than an inch.

Thu 3/10 – Chance for light snowfall into mid-morning, then dry and windy, accumulations less than an inch.

The infrared satellite image (below) today shows high pressure situated off the CA coast and some high clouds north and east of Mammoth associated with a weather system currently located in the interior PacNW.

High pressure will hold in place tomorrow, then the upper-level weather system will move southward tomorrow overnight and early Thursday (image below) for a chance for light snowfall in addition to a chance for flurries tomorrow afternoon and evening.  It will also produce strong northeast winds in the wake of its passage Thursday mid-morning through the afternoon before winds decrease Thursday night likely resulting in lift holds.

Models are only showing light amounts with the passage of the inside slider type system that are typically moisture starved.  Both the GFS and ECM are showing less than a tenth of an inch of liquid (images below).  Not expecting more than an inch of snowfall that will likely get blown into Fresno bowl anyway. 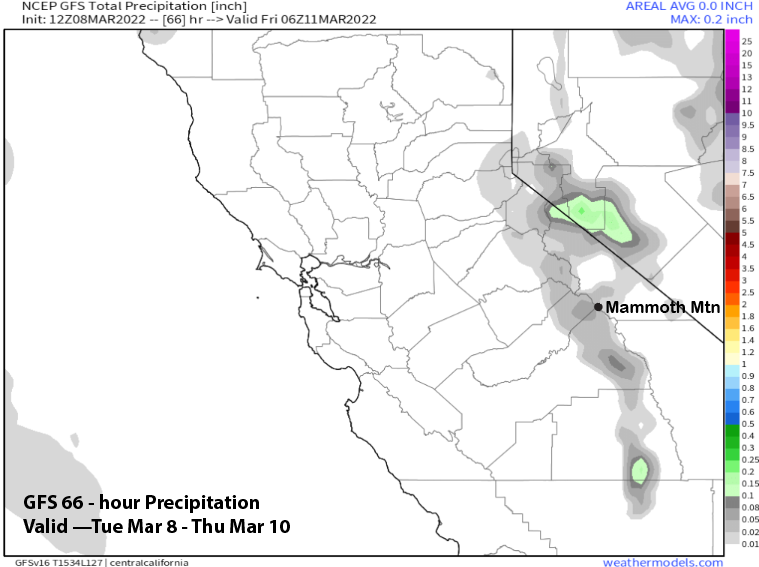 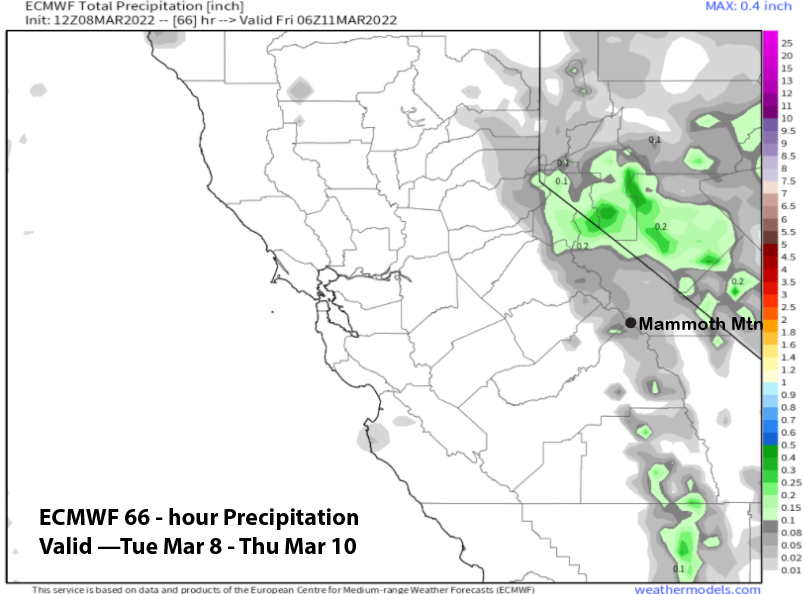 High pressure will then rebuild slowly on Friday and Saturday for another round of fair/warmer weather along with lighter winds.

The longer-range guidance is still only favoring a couple chances for small storms through the third week of the month as there are still no clear signs of any big storms that have evaded us so far in 2022.

The ECM model moves a short wave into the PacNW on Sunday (image below) and breaks off a very weak upper-level low from the jet that will move harmlessly into Baja.  The GFS is a bit stronger and farther southward with the system, but still too far north for any snowfall in Mammoth.

The guidance then suggests there will be at least a chance for light snowfall around Tuesday and/or Wednesday next week.  The ECM (image below) and Canadian models are the weakest with the ECM model splitting it apart upon landfall.  The GFS model (two images below) holds the system together better and has more jet energy moving southward into CA versus the other models.

Thus, the GFS is showing a decent storm for the Sierra southward into Mammoth (image below) while the ECM model (two images below) keeps most of the moisture northward into NorCal and only has a brushing for Mammoth.  GFS scenario would result in at least 6” of snowfall while the ECM forecast would be maybe an inch. 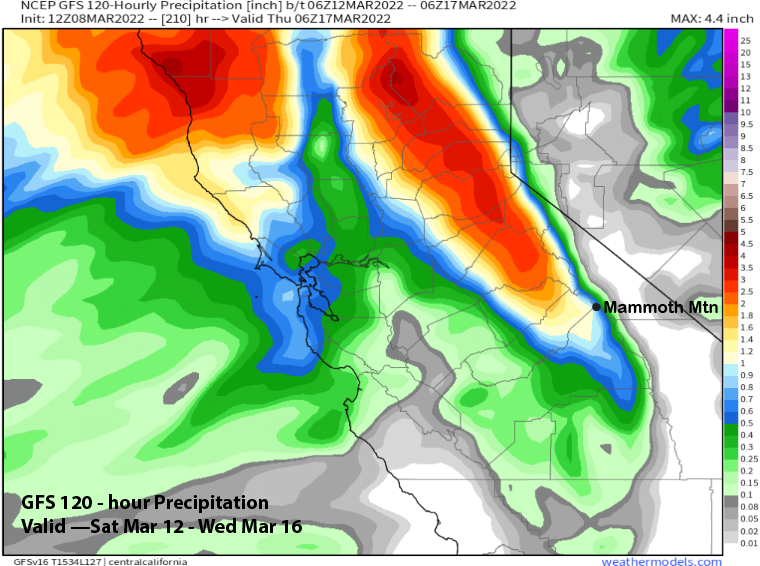 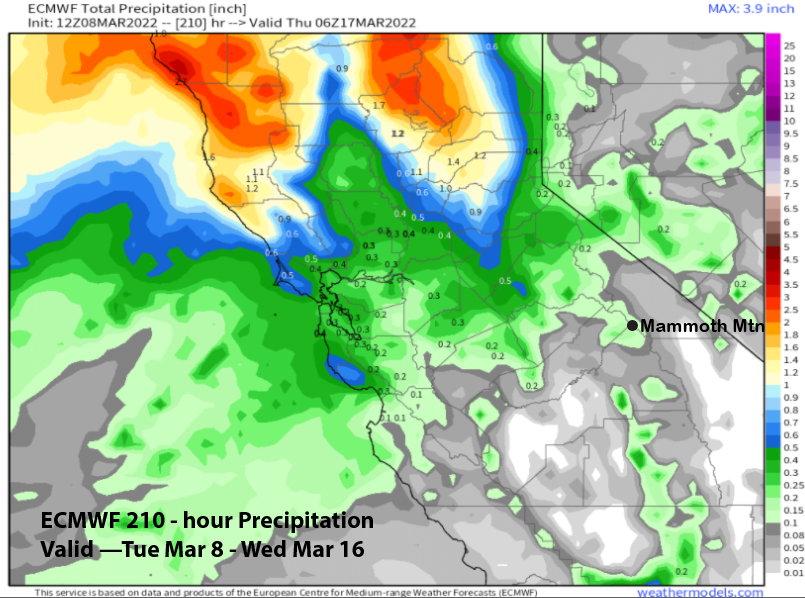 Current forecast follows the ECM ensemble mean that has about a quarter inch of liquid or a couple inches of snowfall for the possible event with also a good chance for nothing/little. That is in line with the GFS ensemble that has the jet farther northward and weaker (image below) versus the operational model.  One good footnote is the recent trend with the ECM ensembles on the 12Z run is generally wetter with more ensembles showing at least something, instead of nothing.

High pressure should then build into the state for the latter part of the week for fair and dry weather.  The GFS (image below) and ECM ensembles then suggest a long-wave trough could get established along the West Coast over the latter part of the following weekend. Right now, the jet is too far north for big snowfall in Mammoth and it would probably be another tiny storm.

Longer range fantasy guidance lifts the jet a bit northward over the following week (image below), although it keeps a long-wave trough along the West Coast.  Overall, the GFS and ECM ensemble mean guidance is not showing big amounts (two images below) for the next two-week forecast period at just over half an inch liquid. 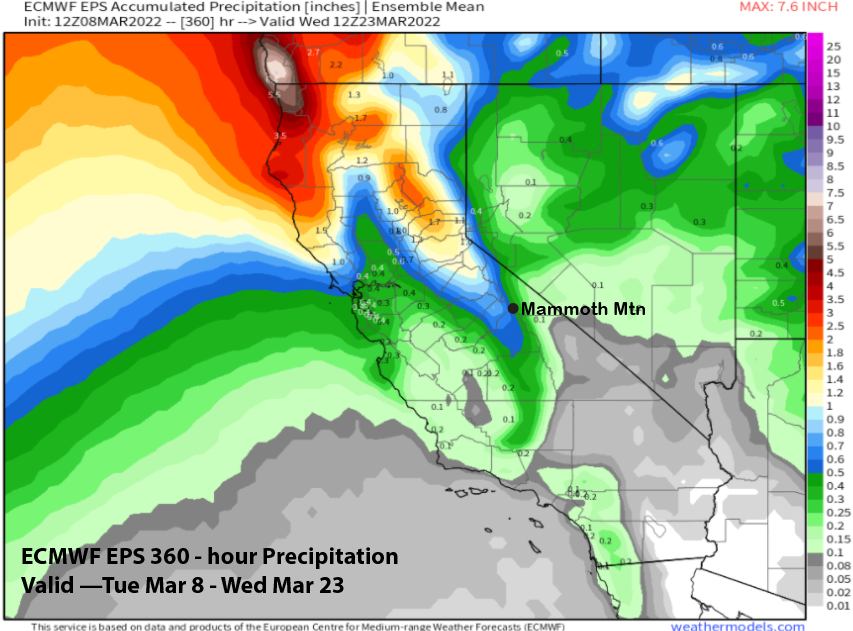 Climate models keep suggesting that the deeper long-wave West Coast that never seems to materialize this season will happen toward the end of the month and into April. If March ends up a bust, it would not be unprecedented if April did end up being the biggest snowfall month for the January through April period. It has happened before two times, in 1972 and again in 2003.  WG