Weather Forecast Overview: A week low pressure system is moving thru the area today with moderate winds, cloudy skies and a dusting of snow for the higher elevations.

That system will move south of the area over the next 24 hours bringing the Eastern Sierra clear skies through Friday.

As short wave riding moves in, expect a nice warm up for Wednesday with a big jump in high temperatures on Friday. The next low pressure system that will bring some snowfall to the higher elevations is on the way for mid day on Saturday into Saturday night.

As that system moves east on Sunday there could be some early snow showers and then ridging builds into the area for the following week for a taste of spring sunshine.

If you’re going to be out on the hill on Wednesday expect mostly clear skies with highs at Main Lodge in the low 40s with upper 30s over the higher elevations.

Morning start time lows will be in the mid to upper 20s. Winds will be out of the north at 15 to 25 MPH with stronger gust over the top.

Thursday expect mostly clear skies, Highs will again be in the lower 40s with upper 30s over the higher elevations. Morning start time lows will be in the upper 20s to low 30s.

On Friday highs will come up 5-7+ degrees so break out the sunscreen and get those skis and snowboards waxed up.

Mammoth Lakes & Crowley Lake: Expect highs in the mid 40s with lows in the mid 20s into Thursday with a high on Friday into the low to mid 50s. Winds will be mostly calm with some gusts to 10 mph at times

Bishop and Mill Pond: It’s early spring now at this elevation with highs in the mid to upper 60s with night time lows into the low 30s. By Friday highs will be into the low 70s.

Wind wise for Wednesday expect North to northwest winds at 9 to 14 mph increasing to 15 to 20 mph in the afternoon. Winds could gust as high as 30 mph.

As for snowfall amounts, confidence is low with a spread of 2-4 inches to 6-12 inches over the models runs I look at. Let’s hope and pray for increased QPF on all the models over the next few days.

Mammoth & Crowley Lake & 395: Expect snowfall by Saturday Afternoon that could come all the way down to Toms Place and possibly a bit down the Sherwin Grade. There is a good chance that there will be snow on 395 and local area roads at some point late in day or just after sunset on Saturday.

Bishop and Mill Pond: A slight chance of rain for these areas is in the forecast for Saturday into Saturday night.  If anything there will just be a few drops of rain.

Next Weeks Outlook: Expect a strong ridge of high pressure to build over the Western US. The center of that high will be well north of Mammoth and the Eastern Sierra.

Looks like next week we start with spring temperatures but with a North flow that will hold off the big thaw till the middle of next week and into the following Friday.

How warm it gets is still uncertain this far out. More then likely the Main Lodge will see highs in the 40s to start next week with low 50s by the middle of next week. 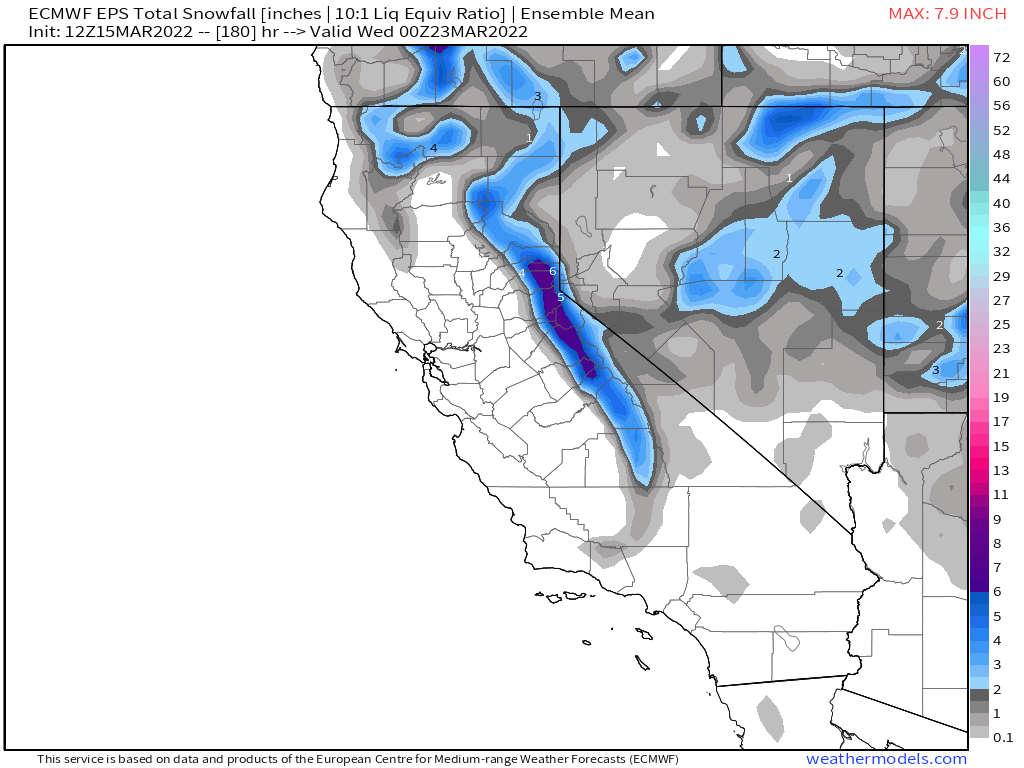 Fantasy Longer Range Outlook to day 16: Looks like winter will make a nice little return for the last weekend of March. By this time frame there will be a new 21 day pattern set up so maybe they will be more then just a few inches when that system hits.

April Snow?:
Fantasy Long Range Models keep the roller coast ride of winter to spring and back again right thru the month of April.  Models have promise of several inches of water for the high country that would result in possibly several feet of snow.

Both the GEFS and the EPS show QPF with the best chance in the April 7th thru 11th time period, but with more after those dates. Looks like off and on Spring to Winter all of April, preaty much normal for spring in the high country. 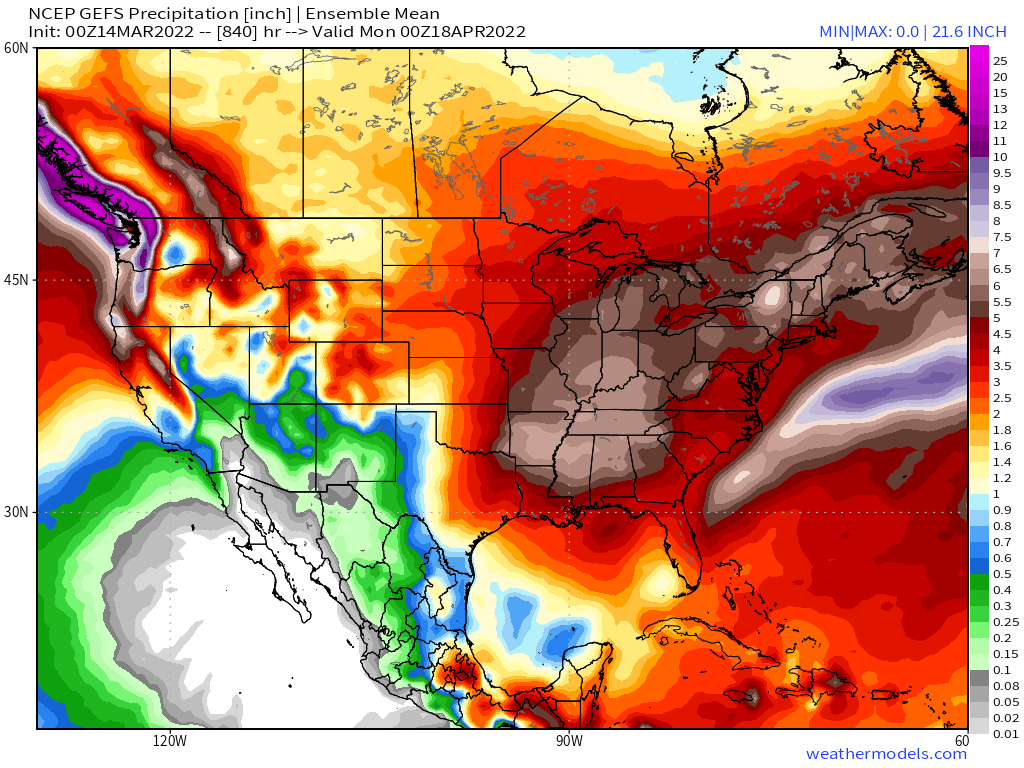