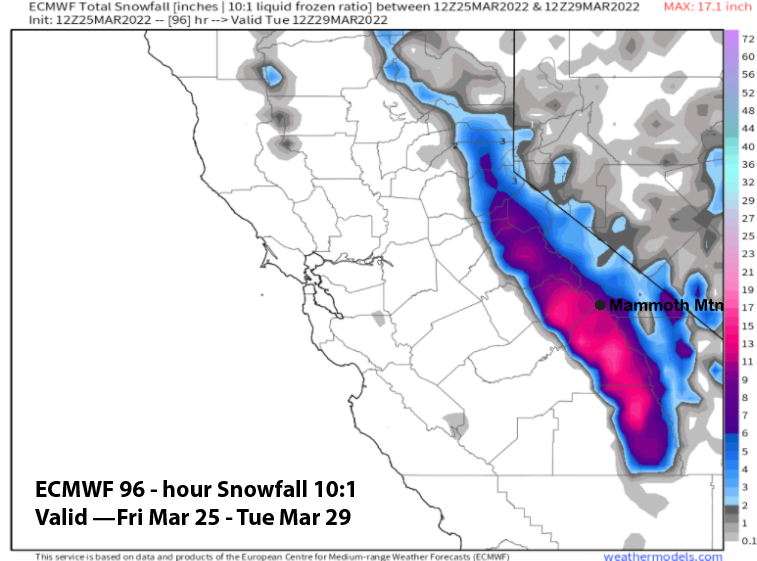 Sat 3/26 and Sun 3/27 – No snowfall expected all days before snowfall develops late Sunday night and early Monday, accumulations 4 – 6” by Monday AM, 6”+ up top.

Mon 3/25 – Snow through mid-morning, then snow showers through the overnight hours before tapering off toward morning, accumulations 2 – 4” by Tuesday AM,  up to 6” up top.

Tue 3/26 –Chance for light snow showers or flurries during the day, no accumulation expected.

The infrared satellite image (below) today shows high pressure centered over the state and extending northward into the PacNW.  It also shows a weather system moving into the eastern Pacific that is part of the storm system expected late Sunday night and Monday.

The models are in agreement that a rather deep closed upper low will pinch off from the jet stream and move to near the Central Coast by early Monday morning. The GFS (image below) is slightly deeper than the ECM model (two images below), but both models have the upper-low in the relatively same position with a decently strong southwest jet extending eastward into the Sierra.

That is expected to drive a cold front southward through the Central and Southern Sierra including Mammoth overnight Sunday and Monday morning with a brief round of moderate to heavy snowfall.  The ECM model is a bit slower moving parent upper level low southward into SoCal Monday night and Tuesday, but both models keep snow showers ongoing overnight Monday and into early Tuesday.

Even though it is a bit weaker, Quantitative Precipitation Forecasts (QPF) from the ECM model (image below) is larger at over 1” versus the drier GFS model (two images below) that has only about a half an inch liquid.  I can only surmise that the ECM model has a stronger low to mid-level jet (850-700 mb) resulting in better spill-over into the eastern part of the range and adjacent valleys. 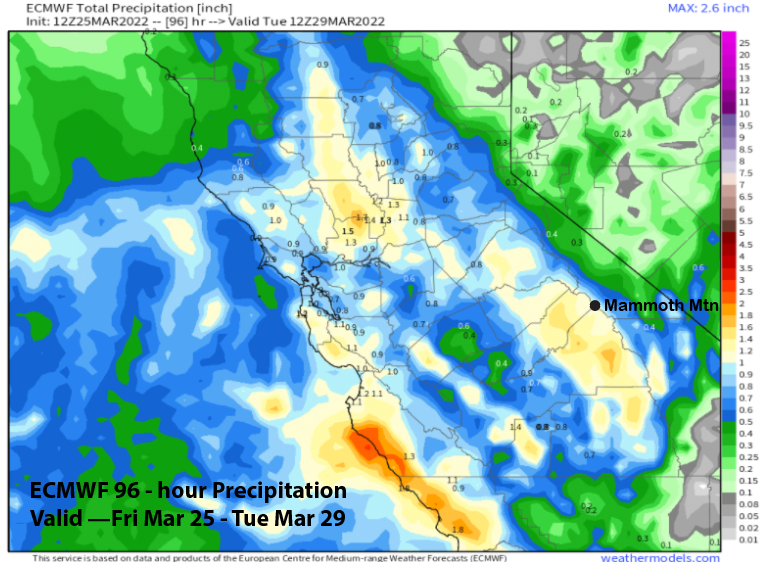 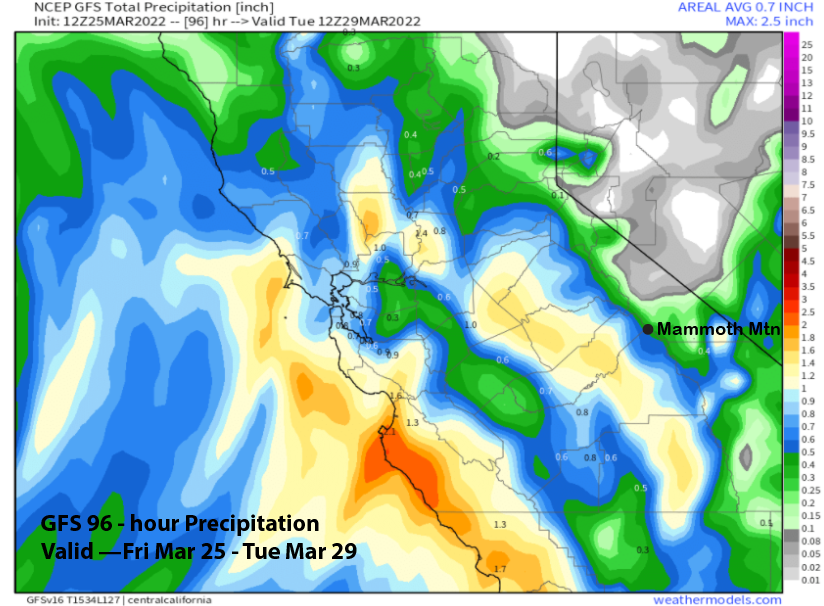 The snowfall forecast follows a blend of the ECM EPS mean (image below) that shows around 0.75” for Mammoth and the latest 12z ECM operational run that has around 1.25” liquid.  Thus, a solid 6” of snowfall is likely and possibly up to 10” at Main with relatively more up top per actual amounts. 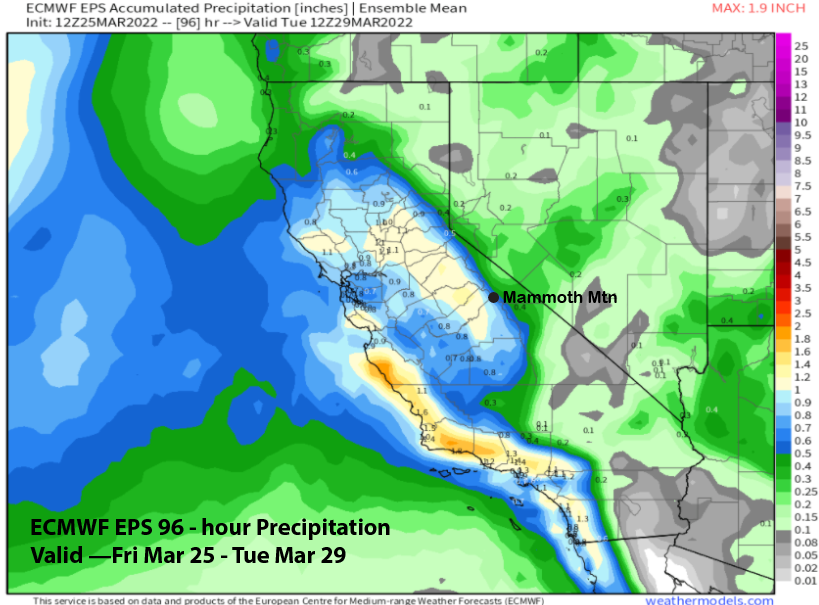 Most of the snow will fall Monday morning followed by only a couple/few inches during the afternoon and night.  It will be a wetter type snowfall and not super light. That should make for buttery turns for riders of the storm on Monday, especially since winds don’t look super strong with this system and there may not be a lot of lift holds. Tuesday should be mostly dry other than a chance for flurries or light snow showers.

The longer-range guidance is showing a few chances for light/moderate snowfall in the fantasy time frame, but the damage is done. The January through March period this year will end as the least snowiest mid-winter period in the history of Mammoth mountain ski area (image below). With only 14” inches of snow since the start of the year, 2022 is well behind the second ranked year 2015 that occurred only seven years ago during the last drought. This time we will probably finish with half that amount.  Interesting that half of the driest twelve mid-winters have occurred over the past 20 years. 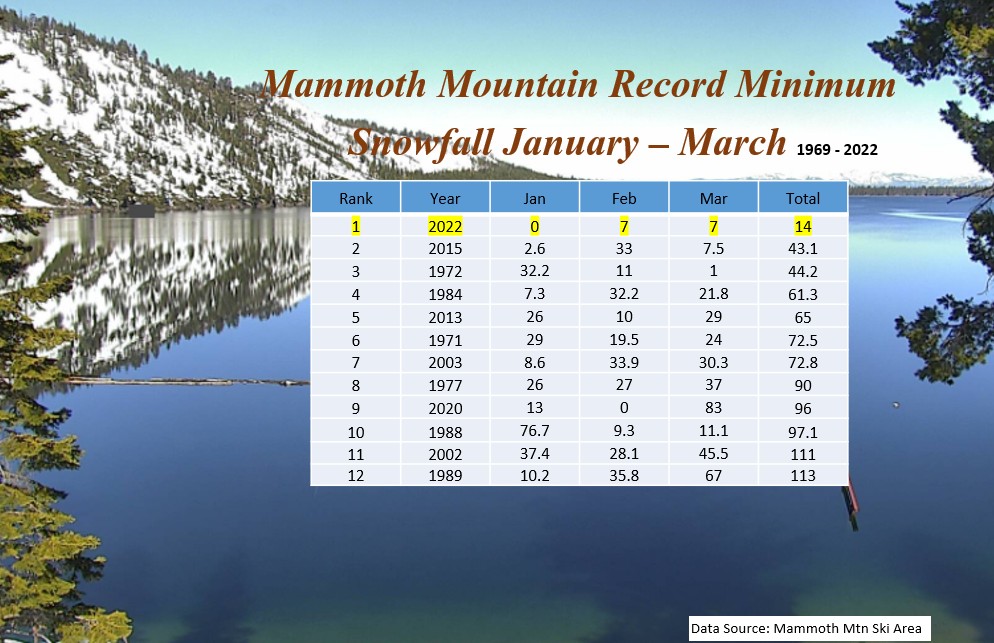 The ECM model does move a slider type short-wave into the eastern Sierra around Thursday next week (image below) and that should produce some gusty northeast winds along with colder temperatures, but just a slight chance for light snow showers. With the new snow on Monday though, conditions should be the best in a long time across the mountain next week, especially if the larger amounts verify.

The ECM model moves a short-wave toward CA at the end of the period over the first weekend in April (image below).  That could produce some snow showers by Sunday night and Monday with the GFS mean (two images below) slower and suggesting any snowfall will occur a bit later with a negatively tilted trough along the W. Coast.  Neither solution is showing big snowfall right now, but with the jet into central CA per the GFS ensemble, only a bit more energy into the southern branch could up the ante.

The longer range fantasy guidance pushes the jet back northward into the PacNW (image below) with weak ridging developing over CA. The ECM EPS has another trough moving through the state around the 8th for a chance.  While not showing big amounts, QPF from the ECM EPS (two images below) is showing more accumulation during the early April. 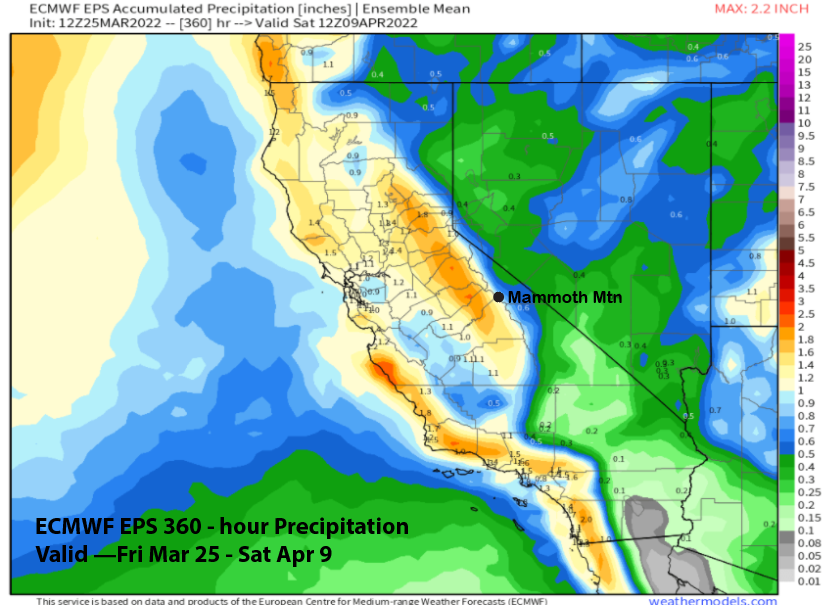 That begs the question. With March snowfall probably ending with less than 20”, can April be the biggest month this season? As I mentioned before, it happened twice in the Mammoth snowfall history (1972 and 2003).  So why not again.  WG