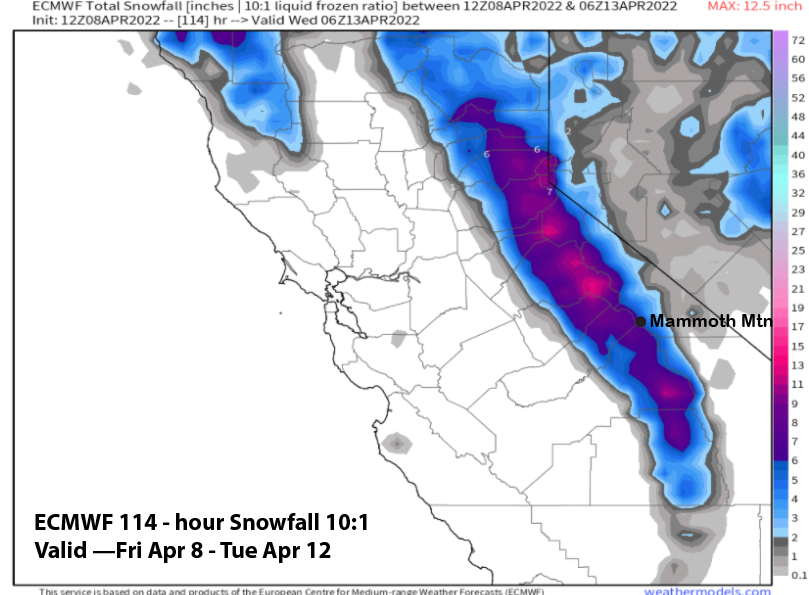 Tue 4/12 – Dry during the morning, then snow showers are possible during the afternoon and/or evening before ending late evening. Accumulations around an inch possible.

The infrared satellite image (below) today shows a weak front progressing through the interior PacNW southward into NorCal that is pushing the high pressure ridge eastward and out of CA over the next 24 hours. The result will be slightly cooler weather tomorrow, but still spring, followed by further cooling on Sunday along with increasing NW winds.

Since the last update, the models have done a slight U-turn and are now showing decent amounts again associated with a strong upper-level trough (image below) expected to move through CA on Monday.

However, they still don’t completely agree with the details yet, and in particular, how far south will the upper-low dig before moving eastward?  The GFS is currently the farthest northward and the ECM the farthest southward with the passage of the trough while the Canadian is closer to the ECM solution.

Those differences are reflected in the QPF from the numerical guidance with the ECM model the wettest (image below) at around 0.75” and the GFS the driest (two images below) with about half that amount.  The Canadian is closer to the ECM model. 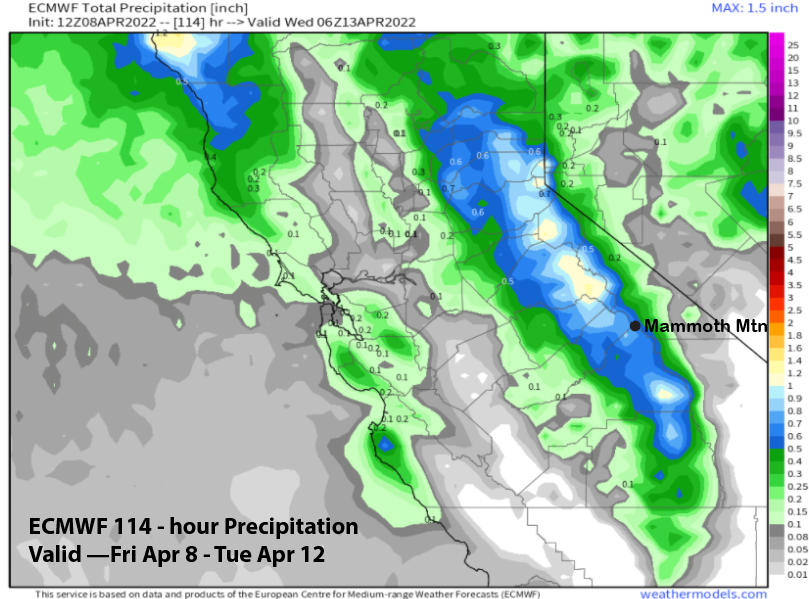 The forecast follows a blend of the ECM ensemble and the ECM operational run that falls fairly close to the majority of the ensemble solutions.  It looks like there is a good chance for about 6” at Main with most of the snow falling during the afternoon and evening Monday.  It might not be much of a storm riding day though, as winds look quite strong and will likely result in many weather holds.

Snowfall should taper off overnight Monday with Tuesday being mostly dry during operations as only wrap-around snow showers are expected during the late afternoon and evening.  It should be a fun powder day on Tuesday under continued cold winter-like temperatures.

The longer-range guidance is a mixed bag in the extended period with one more chance for powder before Canyon/Ch 22 closes and deep powder if the GFS is correct.

Weak high pressure is forecast to build into the state Wednesday in the wake of the Monday/Tuesday storm before the models diverge on solutions for the end of next week.

The 12Z run of the ECM model only moves a very weak short-wave trough into CA around Thursday next week (image below) that would only be flurries or light snow showers for Mammoth and certainly not powder conditions. The 12Z Canadian model doesn’t show this trough, but takes the deeper upper-trough in the PacNW southward through NorCal with the front brushing Mammoth with an inch or two overnight Monday.

The 12Z GFS on the other hand, has a completely different solution, and develops a very deep short-wave trough off the CA coast on Thursday and brings it ashore into Central CA on Friday (image below) with a strong and cold southwest jet stream slamming into the Sierra. It then moves the main upper-low through the Sierra Saturday for continued snowfall.

This GFS solution is somewhat supported by the GFS ensemble mean (image below) that is showing a deep trough along the CA coast toward the end of next week, but it doesn’t favor the southwest jet stream that the operational run shows that is more favorable for orographic precipitation enhancement due to terrain blocking from the Sierra. The ECM mean (two images below) has the trough too, but farther northward into the PacNW with the jet stream (purple arrow) farther northward too. 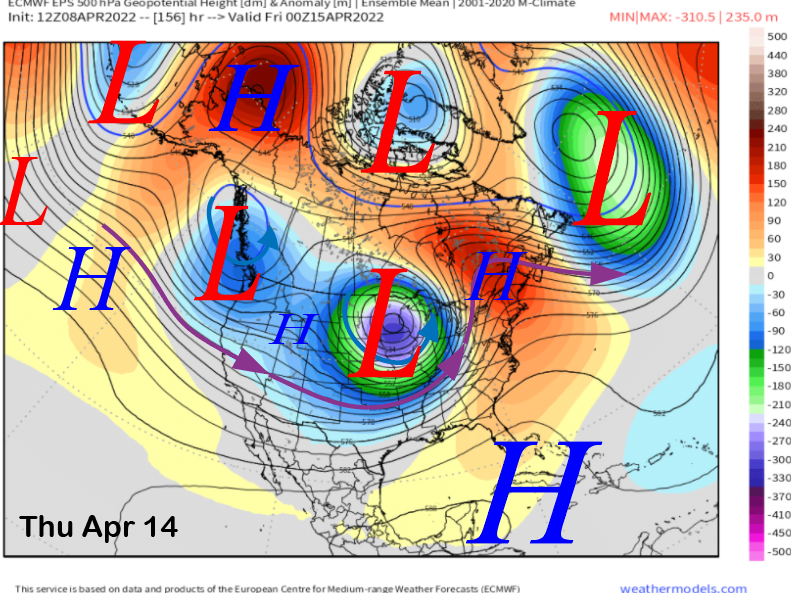 The GFS operational model is obviously the wettest solution (image below) showing around 2” or so of liquid for Main that would likely result in about 20” of snowfall and two feet up top.  About 15 of the 52 ECM ensembles have solutions that show enough snowfall for powder conditions toward the end of next week, so, there is definitely a chance. But, both the Canadian and ECM operations runs are mostly dry. Current forecast follows a blend of the ECM/GFS ensemble means that are only favoring light amounts at a couple/few inches and possibly enough for low-end powder conditions. 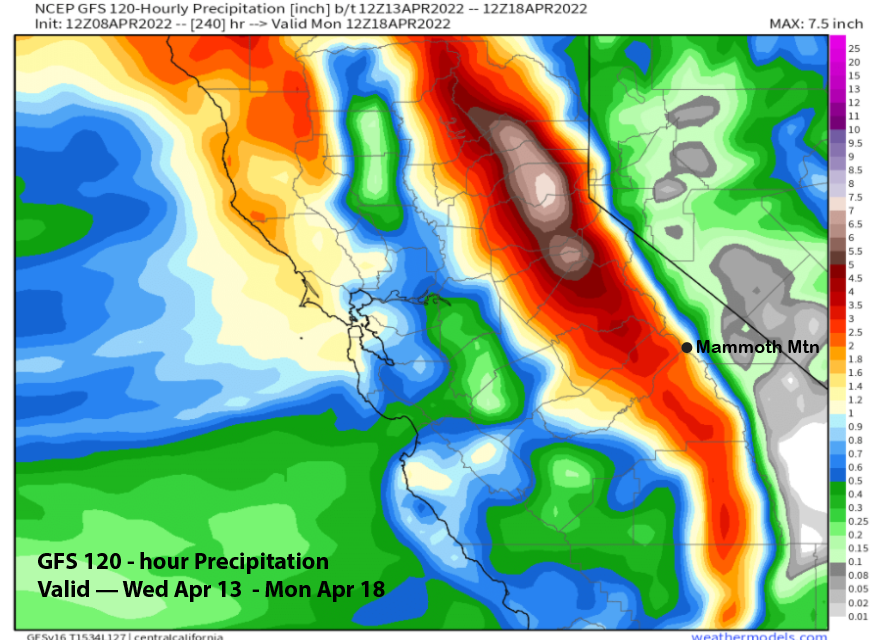 While the ECM op (image below) has ridging starting on Saturday, the other models favor it to be delayed until Sunday and the last day of operations on the Canyon side of the mountain plus chairs 13/14.  It might be a little cool for the pond skim, although it will still be fun.

The longer range ensemble mean by the GFS favors the jet to lift northward into the PacNW over the following week (image below) before the ridge flattens slightly by the following weekend (two images below). That is a mostly dry and seasonable pattern.  The ECM mean is slightly different and does have a chance for a spring storm around Wed/Thu that week before ridging returns. Either way, it looks like spring on the weather maps.  WG