Thu 4/14 – Dry during the morning, then a chance for light snow during the afternoon and night.  Accumulatios ~1” by Friday morning.

Sat 4/16 – Snow likely during the day before ending Saturday evening.  Windy, but not super strong.  Accumulations 2 – 4 by Sunday morning.

The visible satellite image (below) today shows mostly clear skies across Central CA and Sierra with the new layer of snow from yesterday’s storm clearly apparent.  Tomorrow won’t be quite as sunny as some passing clouds are expected at times in addition to slightly warmer, but still winter-like temperatures. 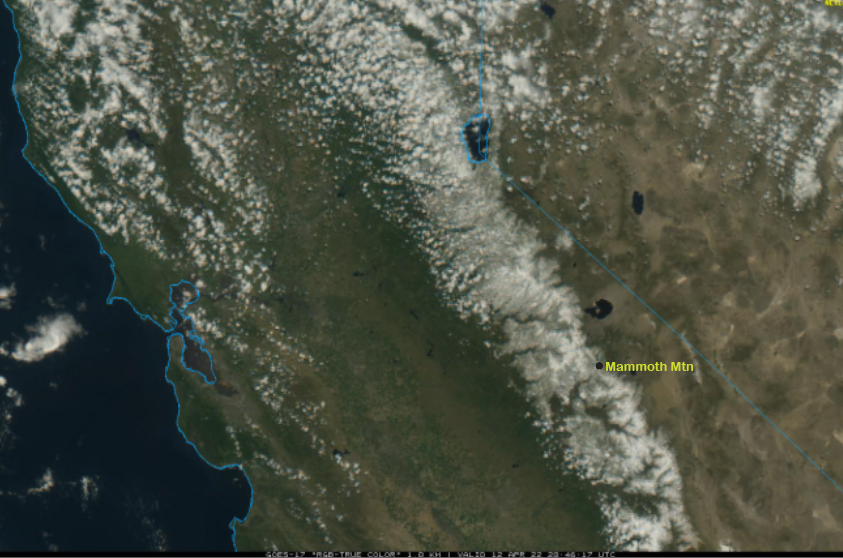 A weather system will move north of Mammoth (image below) on Thursday with the front forecast to brush Mammoth Thursday afternoon and night for a chance for light snowfall. Not expecting more than an inch by Friday morning as the vast bulk of the moisture and precipitation will stay well north of Mammoth.

Friday should be a mostly dry and partly cloudy day before the next storm system moves into the state on Saturday (image below).  That will result in a round of light to moderate snowfall that should start early Saturday and end during the late afternoon or evening with snow levels around 6000-6500 feet.  Winds will be gusty, but mostly during the morning, so there could be good storm riding during the afternoon.

The GFS is showing more with the storm (image below) and about 0.80” versus the ECM model (two images below) that is showing less than half an inch.  Current forecast follows a blend of the ECM mean that has around 0.50” liquid and the GFS model with it probably ending up being another 4-6” snowfall event, similar to most storms in 2022. 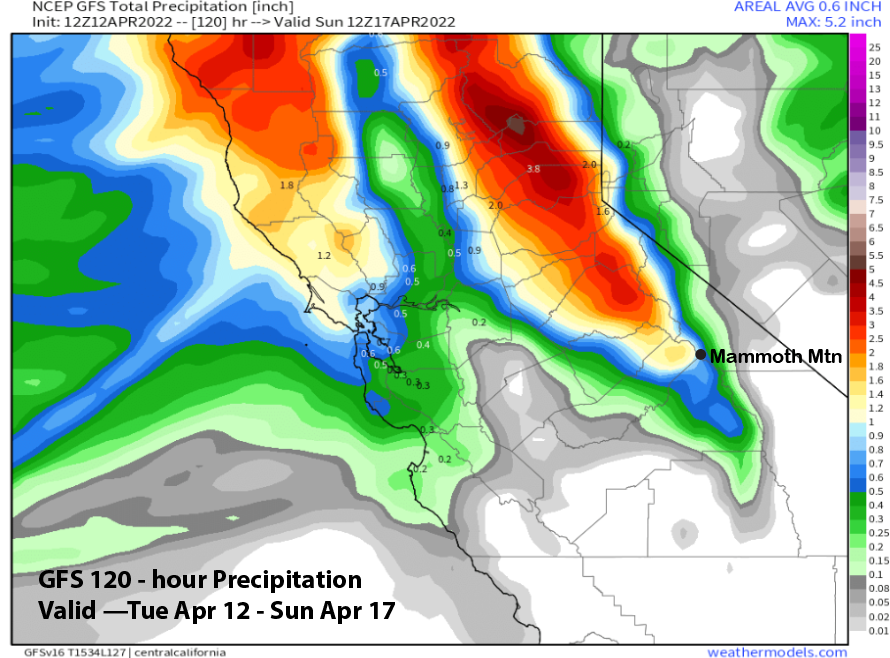 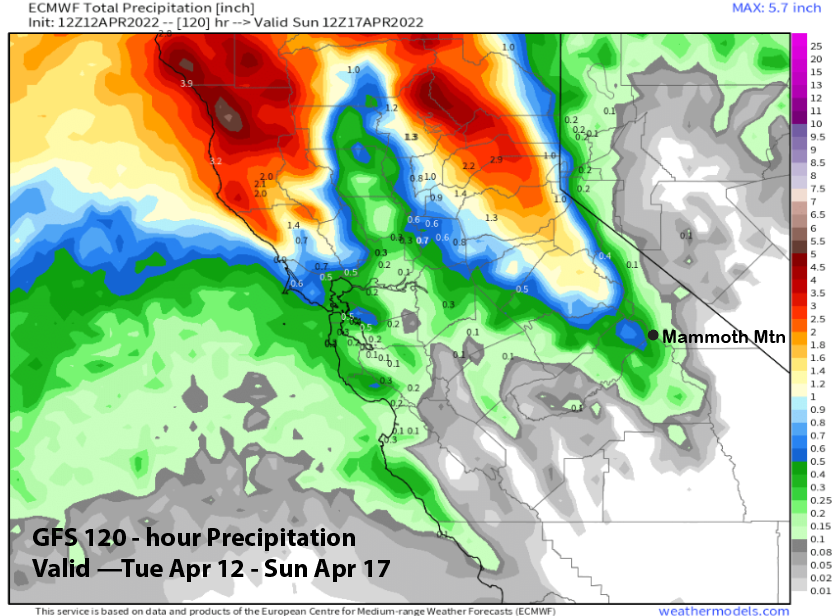 The longer-range guidance says winter may continue at times through next week with a stronger storm possible toward the end of next week.  Wouldn’t it be interesting if we finally got that >1” liquid storm that has not occurred so far in 2022 after Canyon/Ch 22 closes this weekend?

The models suggest there could be some light snow showers or flurries on Tuesday from a weather system moving into the PacNW and NorCal (image below).  Right now, the forecast is only calling for an inch or so, but a slight wiggle southward by the southern branch of the jet stream (purple arrow) and amounts could be larger.

The longer-range guidance is favoring a chance for a bigger storm (but no huge) toward the end of next week with the latest ECM model run suggesting Friday (image below) and into Saturday is when the snowfall may occur.  The GFS op model is similar and only slightly faster.

Better yet, both the ECM EPS (image below) and GFS ensemble means (two images below) agree that there will be a rather deep trough toward the end of next week anchored the West Coast and into CA. Both models suggest that the jet stream (purple arrow) will also be southward into the Central Sierra this time allowing a storm to move into Mammoth. 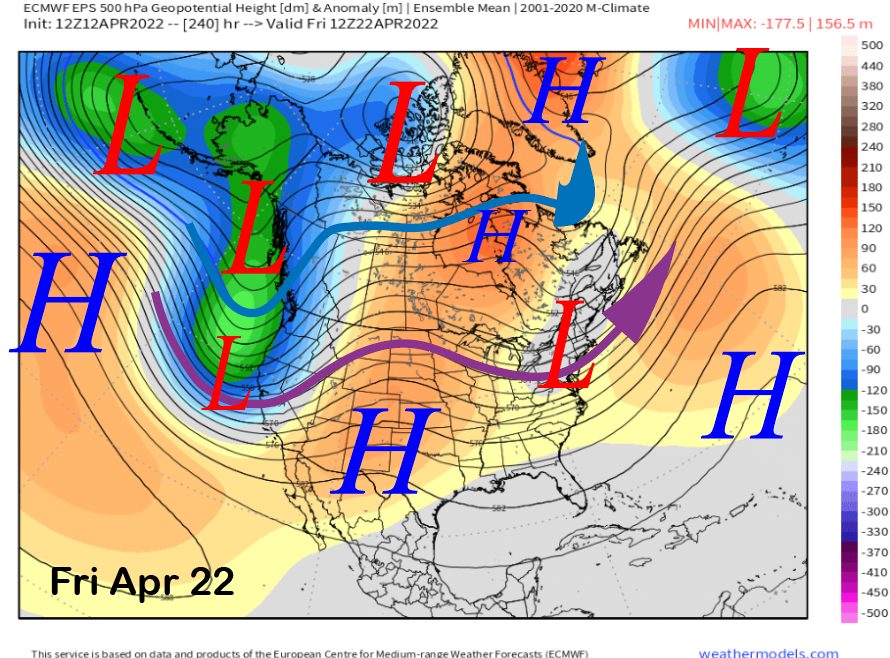 The ECM EPS is not showing a lot with the overall pattern at this time with only around an inch of liquid (image below) through the 24th, keeping the much bigger amounts over Northern CA where the precipitation is needed as well. If the forecast of the deep trough continues though, then the precipitation forecast from the ensembles will likely increase too, as the individual solutions begin to converge. 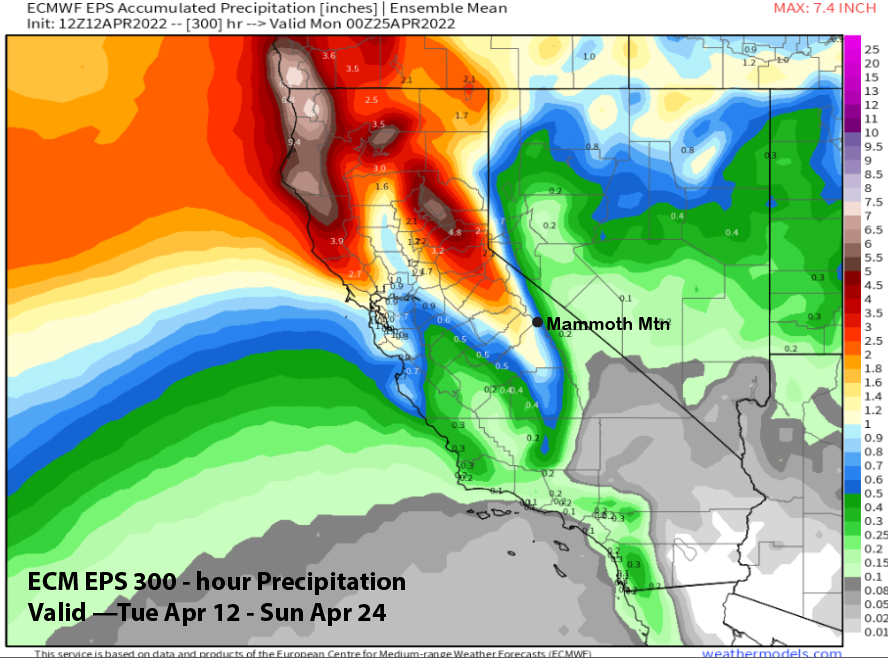 The longer-range fantasy guidance from the GFS ensemble is then suggesting that upper-level ridging may occur heading into the last week of April (image below). The ECM EPS is suggesting the same thing by the middle part of the following week (two images below) for a return back to spring.  With 6” from yesterday’s storm, we only need 9” more inches of snowfall for the rest of the month for April to end up the biggest snowfall month in 2022. WG 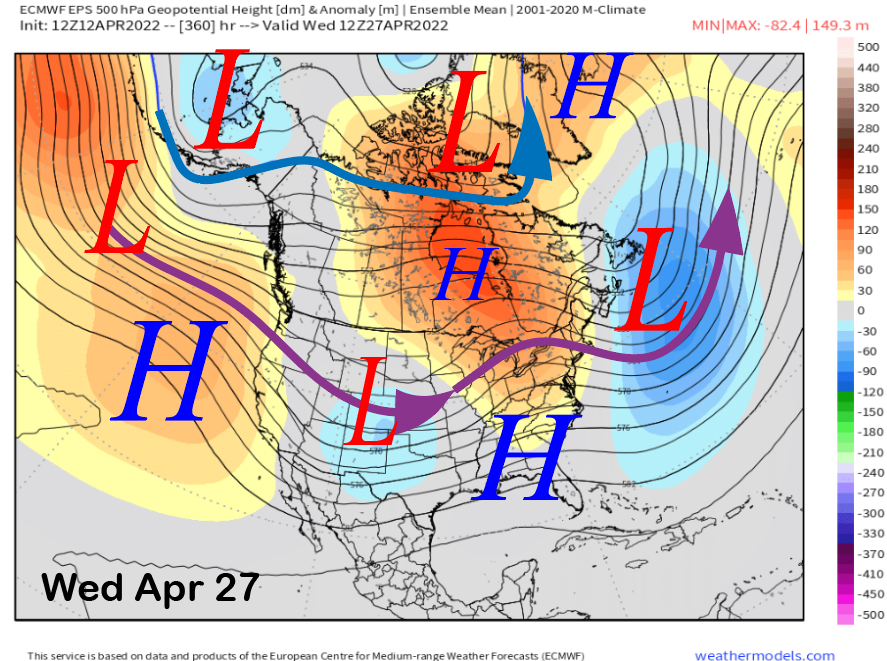