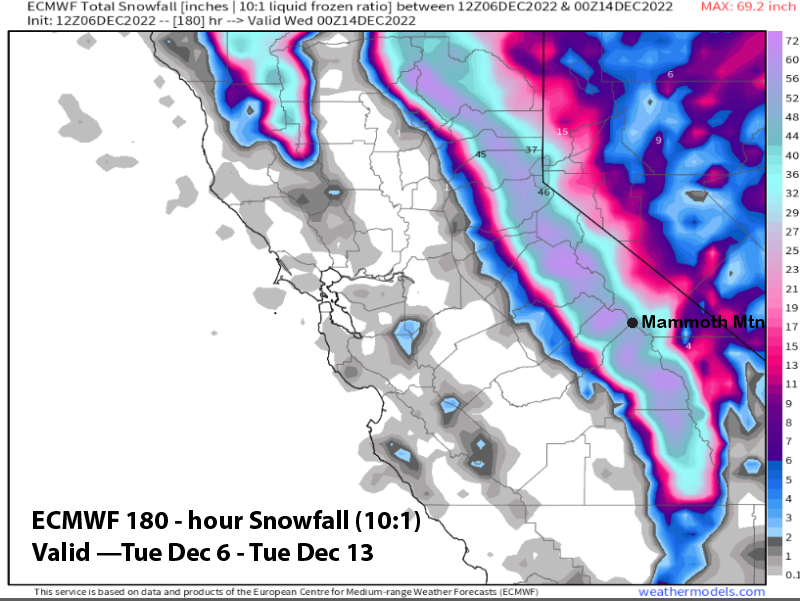 Thu 12/8 – No snowfall expected during the day, then light snowfall develops at night.  Accumulations 1 – 2” by Friday AM

Fri 12/9 – A chance for light snowfall during the day, primarily AM, with snowfall likely starting again late at night.  Accumulations 2 – 3” by Saturday AM

Sat 12/10 – Heavy snow and strong winds likely develop during the day and peak overnight before decreasing Sunday during the day.  Accumulations 25 – 30”

The current infrared satellite image (below) shows a low-pressure system centered along the Central Coast where there are ongoing showers with just clouds/flurries eastward into Mammoth.

That low pressure system will move southward overnight before exiting eastward out of the state tomorrow that will be a fair and dry day.  Dry weather will likely continue during the day on Thursday as well.

Models are now favoring an initial short-wave trough to move through the Sierra Thursday night before exiting into Nevada by early Friday (image below).  That will likely produce some light snowfall overnight Thursday and maybe Friday AM adding up to a couple inches.  Rest of Friday should be dry until overnight.

The forecast for the upcoming weekend has now changed significantly again, and again for the better.  The ECM model has not performed well in the 6-10 day range lately and last Saturday’s forecast out a week for this weekend may end up being atrocious if the current run verifies. It went from a strong ridge to a very deep trough over the course of 3 days (image below).

The latest ECM and other models deepen the trough along the coast on Saturday (image below) with the ECM (two images below) and Canadian models deepening it further on Sunday. The GFS still has a deep trough on Sunday, just positioned closer to the coast.

Models generally increase the snowfall on Saturday morning with the heaviest snowfall expected on Saturday night and into Sunday. If the ECM is right, snowfall could continue into Monday as it keeps the deep trough overhead (image below).

Details are still not certain and will probably change, but there is a very good chance for a storm riding and/or powder days over the weekend.  Winds will be a concern on both days though, with the strongest winds currently expected Sunday morning.

The model QPF between the 12z runs of the GFS (image below) and ECM (two images below) are remarkably similar for Mammoth area.  Both models are forecasting around 5” liquid with the Canadian model the wettest again at nearly 8”.  Current forecast is a blend of the ECM ensemble mean and latest operational QPF with at least 3 feet favored for Main and probably around 4 feet, maybe 5 feet if we get lucky.  Five feet is certainly possible up top by Monday/Tuesday.  It should be a classic winter storm. 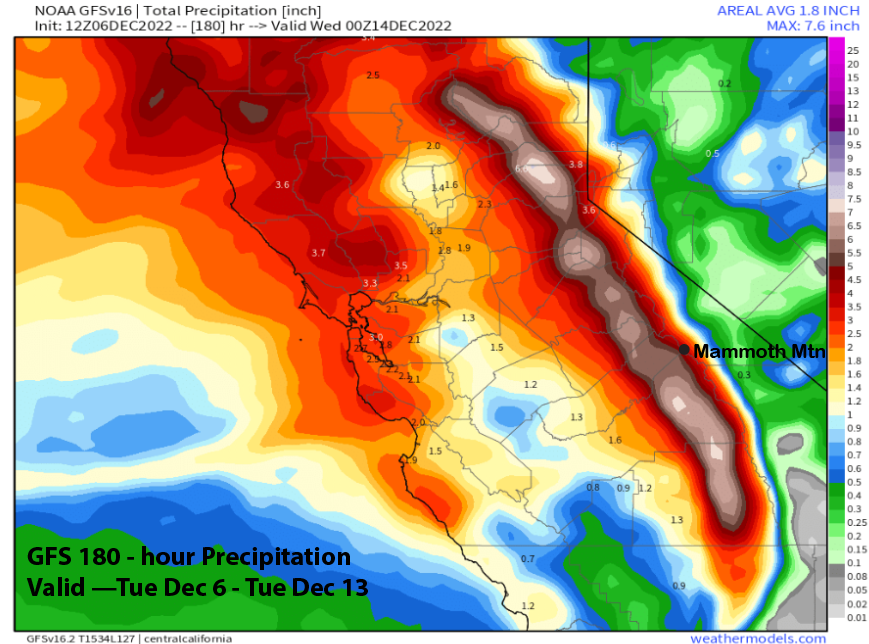 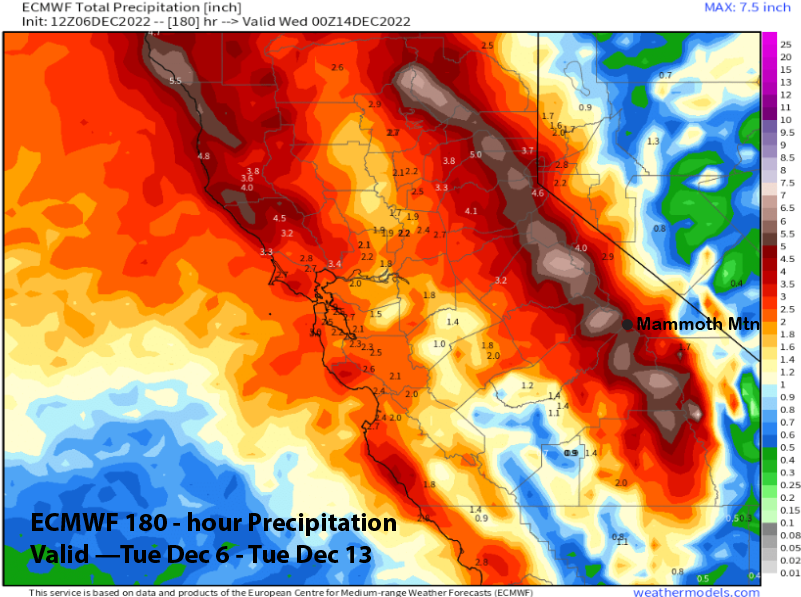 The longer-range guidance is mixed about the pattern for the middle part of next week before favoring a dry period to develop over the following weekend that could last until Christmas or longer.

The ECM model is the slowest at moving the upper trough eastward around the middle part of next week and leaves a small remnant low pressure system over SoCal into next Thursday (image below).

The GFS is totally different as it moves the upper low eastward on Tuesday and then moves another short-wave trough into CA by the end of next week (image below).  The ECM solution is dry while the GFS one has moderate snowfall.

The GEFS favors a trough for the middle part of next week (image below) with the jet stream (purple arrow) far enough southward for possibly a weak storm into Mammoth.  The ECM ensemble mean is similar.  The Canadian model also has storm for that period.

Thus, the forecast is calling for another powder chance around the middle or latter part of next week.  Current guidance says snowfall starts Wednesday and continue Thursday, ending Friday.  Doesn’t look like a big storm at this point.

Longer range guidance is then favoring ridging (image below) to develop over the weekend and into the next week.  That would mean a return of dry weather.

The climate models are still favoring a period of dry weather to develop around then and continue to around Christmas, maybe slightly longer.  ECM 14 -21 day outlook (image below) is showing below normal precipitation before shifting back to normal precipitation last week of the year (two images below).  3-4 weeks is a long time to wait, get those powder days in now. WG 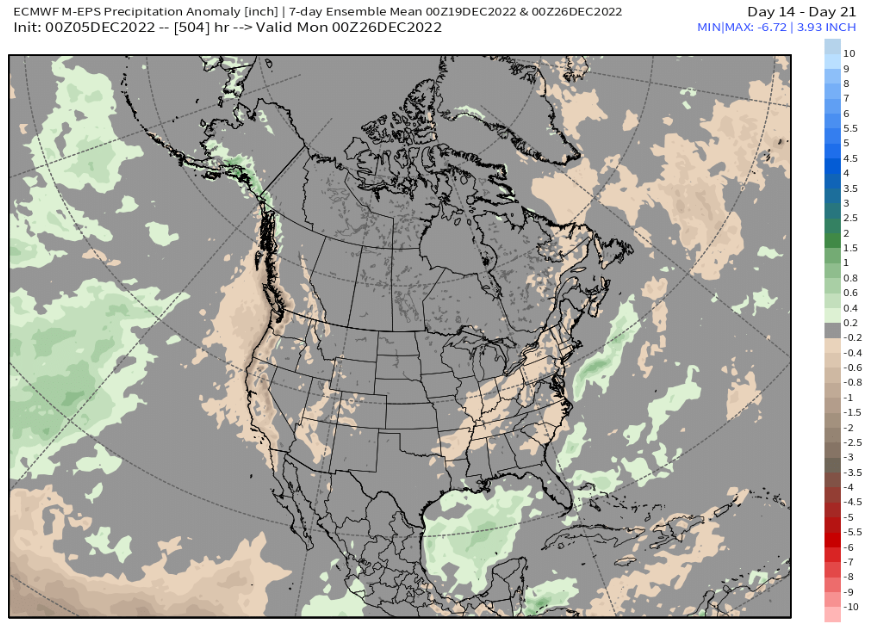 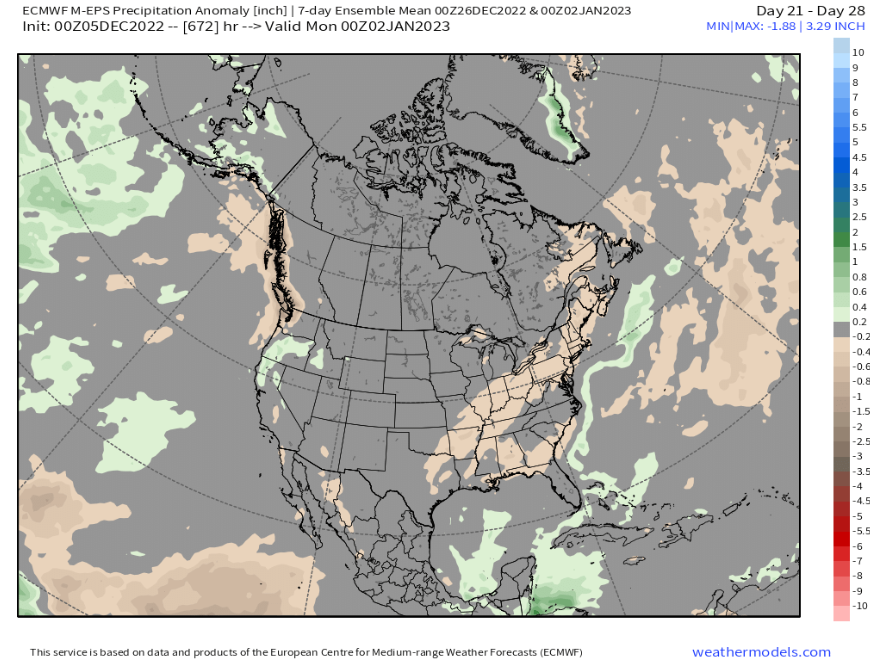