Infrared satellite imagery (below) today shows the same high pressure ridge off the coast blocking storm systems to our north and east.  A weak front is currently passing to the east of Mammoth today and weak high pressure will build into the area tomorrow.

Models are now favoring the next weather system on Sunday (image below) to move well north of Mammoth and have backed off on any snowfall.  It will produce an increase in west winds Sunday and then colder temperatures early next week.  NE winds could also get gusty Monday and Tuesday.

As expected, the dry pattern will likely like next week too.  Models do move a weak upper low into the SoCal deserts around mid-week (image below) that would keep temperatures seasonably cold and also produce breezy/gusty NE winds, but no snowfall.

Weak high pressure is then forecast to build into CA for the end of next week and into the following weekend (image below) for continued dry weather and seasonable temps.

The longer range guidance is then suggesting there is a chance for snow on Sunday or early Monday of that weekend.  The ECM (image below) and GFS (two image below) both split an incoming upper level trough with a piece of energy moving southward into central CA.   The Canadian model doesn’t split the trough and has it farther northward (three images below).

All models are only showing light amounts of precipitation with the weather system.  The GFS is the wettest with just over a quarter inch liquid (image below).  And that is not much and would result in only a couple inches of snowfall.   The ECM mean is also showing around a quarter inch.  Overall, the systems in the longer range forecast lately have ended up drier when verification gets closer, so we will have to wait and see if there is any snowfall at all.

One of the bigger questions now is whether there will be any snowfall in Mammoth during February.  There has never been a February in the historical snowfall records for Mammoth when there was no accumulating snowfall.   The record lowest is 6” in 1991.  That was followed by a 176” March.    The other low was 1997 when 6.5” fell, but 270” fell in the two previous months.  So we are in record snowfall territory right now and unfortunately the wrong one.

And the longer range guidance is showing basically the same weather pattern until around the end of the month.  The good news is that the climate models have been rather consistent and bullish about a wet pattern developing in early March (image below) that may last a couple weeks.  After a dry January and February, odds are in our favor for at least average snowfall in March.  WG 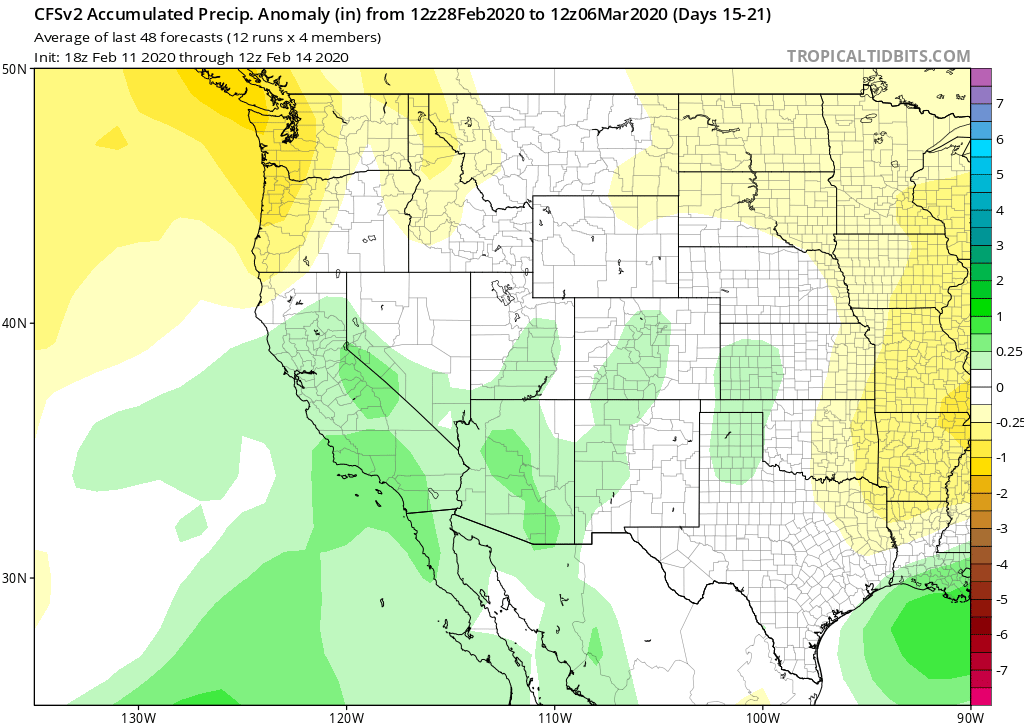