About Us - The Crew that Makes it Happen

Began skiing at Mammoth Mountain in 1969, he got his first Mammoth season pass in 1985 and ripped off 86 days while being home-based in La Canada.

Steve made the move north with his wife Jennifer from La Canada full time in 1990 to be closer to the slopes and run his father’s business in one of Mammoth’s first home-based businesses.

Steve was one of the first work-from-home ski bums in ski country. Dad’s customers were all in Southern California, with Fax, 800 Toll-Free Lines, and the new internet it was a dream come true.  You could ski every day and still make a great none resort income.

Over the last 30+ years, Snowman has spent countless hours studying and learning about mammoth mountain weather and snow conditions firsthand.

Snowman started blogging this information back in 1990 on the old Mammoth BBS system, then the RSN Forums, and then on to MammothSnowman.com in 2004 with his Video & Photo Blog report.  (No YouTube back then)

“I started the website because I wanted to get skiers from the Los Angeles area excited about coming up so I wouldn’t have to ski alone,” Steve explained. “Now I have 300,000+ new friends, thanks to MammothSnowman.com.”

Snowman still has his videos and photos featured on TV Stations here in Mammoth and Bishop, along with KTLA, ABC, CBS, FOX, and NBC News outlets local and nationwide.

We met The WeatherGuy about 10 years ago on the Mammoth Mountain Forum.  He checked out MammothSnowman.com and offered to do a Powder Forecast.

Those forecasts are now responsible for many people getting multiple powder days on Mammoth Mountain over the years. Ted Posts November into mid-May every Tuesday and Friday by 5 PM. Here is the link to his blog page on the website. 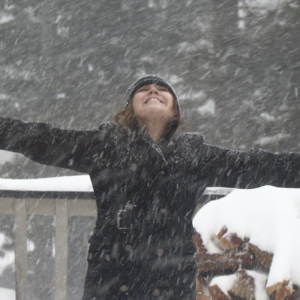 After growing up in Mammoth Lakes, this is the perfect job for Shannon. She has been to every nook and cranny around town and on the hill.

Look for a much more streamlined presence on Social Media, the Summer reach on Social was up over 500% with her added efforts last summer.

Jon Goettig – Pt Time Snow Reporter – I met Flaskman on the old RSN forum, turns out he was the other guy making tracks all those years in my secret lines.

I trust his observations when he calls or texts his reports in.

While he is not a local he spends 40-50 days on the hill and most of those are weekends when Snowman is off the hill.

Over the season you will also see a bunch of his photos on the website.

Mammoth Snowman Community – Lots of people text and email us photos and snow observations, everyone thanks those who put the effort in. It’s about the community and getting the most current and accurate information out there.