Sat 2/29—Dry with increasing winds during the morning, then a chance for snow flurries by the afternoon with a period of steady snowfall expected overnight and into Sunday.  Accumulations 3 – 4” by Sunday AM, up to 6” up top.

Sun 3/1—Snowfall tapers off during the morning and into midday before increasing again late PM and evening, ending overnight.  Accumulations 4 – 6” by Monday AM, up to 9” up top.

Infrared satellite imagery (below) today shows lots of high cloudiness spreading into CA from a weak subtropical low-pressure system positioned off the SoCal coast.  It also shows s frontal system moving southward into the PacNW that is pushing high pressure east and southward away from CA.

The models are in agreement that the front and associated upper-level low pressure will move southward into NorCal tomorrow PM/night and then into central CA by early Sunday (image below).  It is lacking moisture as evident by the lack of deep cloudiness on satellite but will have enough jet stream strength and moist up-slope flow to squeeze out a few inches upon passage.

Steady snowfall should begin around mid-night Saturday and continue into mid-morning Sunday before tapering off through midday.   The upper-level trough is forecast to cut-off from the jet stream and move southward into SoCal Monday and that will result in another round of snowfall Sunday late PM and evening before ending overnight.

The second period of snowfall will be moist northeasterly flow and there could also be a Mono Lake effect for enhanced totals at June.   It will also be quite cold with this second band of snowfall with snow levels down to 2K.    Snow ratios will be normal with the first part of the system, but could be 15-20”:1” with the latter part of the storm.   So this will not be Sierra cement type snowfall, but cold/dry powder.

Models are showing about 0.75” or more now with the storm.  The GFS (image below) is the wettest at over 0.75” while the Canadian (two images below) is similar to the ECM at around 0.75”.  The ECM mean is showing less and around 0.50”.   Current forecast favoring closer to the GFS with at least 6” of snow at Main and possibly up to 10” and enough for powder conditions.  I would not be surprised to see a foot or more up top.

Dry weather returns Monday under cold temperatures with fair and warmer weather Tuesday as high pressure rebuilds over CA (image below).   There could be some gusty northeast winds Monday, hopefully, the snow won’t get stripped up top.

If you have lived in CA a long time, then you probably know that we usually get our precipitation each season in bunches followed by dry periods of varying lengths.  Some seasons the dry periods are brief (wet years) and others they last a long time like this season (record dry period for San Francisco is 43 days during winter 1863-64, the last time SF also did not receive rain during February).

They all come to an end at some point before the rainy season ends in late spring and after another dry weather next week, the pattern may shift into a wetter one by the following weekend or over the next week.  The latest ECM model moves a trough into CA next Saturday (image below) for snowfall and the 18Z run of the GFS is now showing something too.

The ECM model than develops a very deep closed low off the CA coast early the following week (image below) with moist southwest flow developing into CA.   The other models also have this feature but are farther off the coast.   So the timing is still questionable.

Both the GFS (image below) and ECM ensemble mean do move a trough eastward into CA by the middle part of that week that would result in precipitation in CA with a subtropical tap and maybe an Atmospheric River (AR).  We have not seen moist southwest flow off the Pacific much this season with most of the storms coming from the colder Gulf of Alaska.  Overall, if the models are right, then Mammoth could receive much needed base-type snowfall or Sierra cement.

The longer-range guidance keeps a weak trough in place along the West Coast and CA through mid-March for continued chances for snowfall.   And both the CFS (images below) and the ECM models have normal or slightly above average precipitation for the second half of March.   Feast or famine.   Hopefully, it will be time to feast soon.  WG 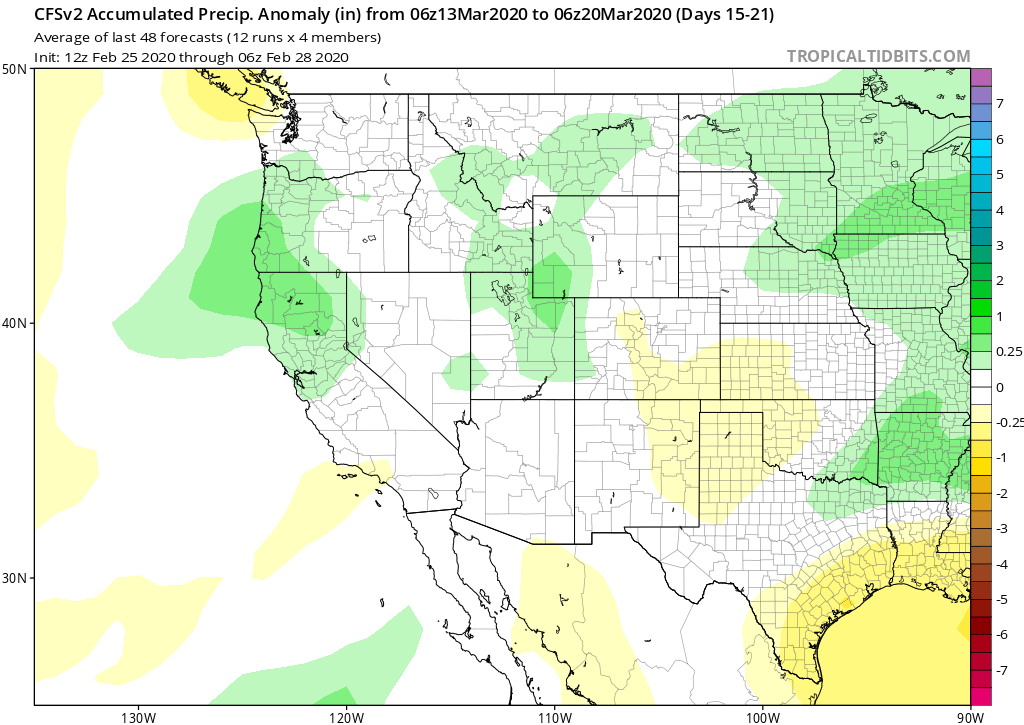 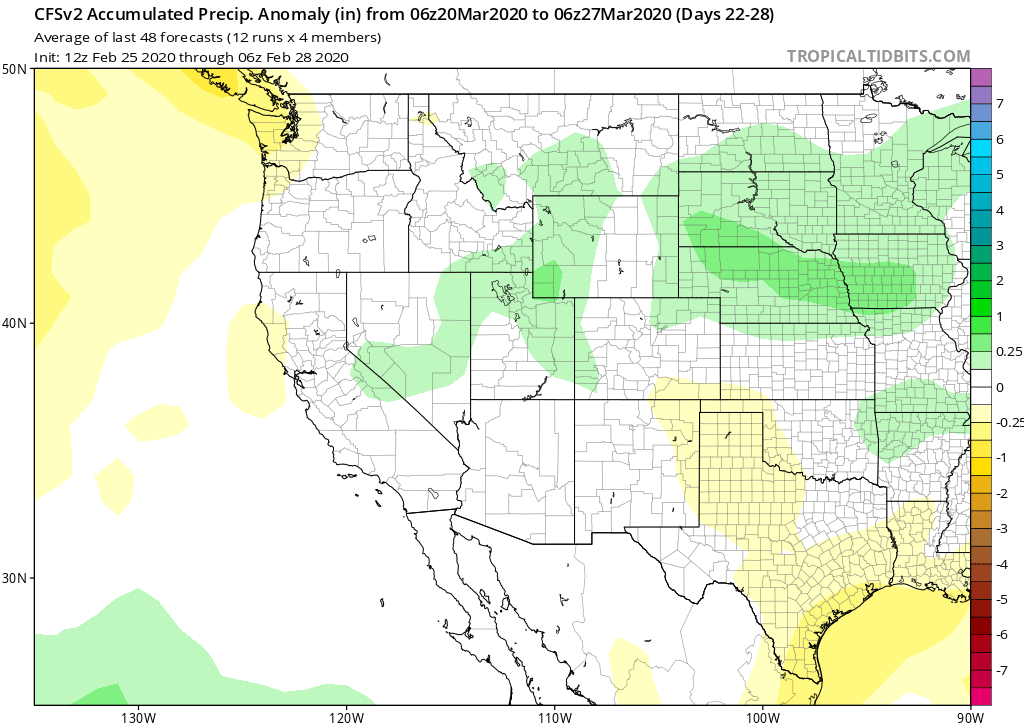