The infrared satellite image (below) this afternoon shows an upper level low-pressure system moving into NorCal from the interior Pac NW.  Showers are developing along the crest of the N. Sierra and the precipitation is expected to move southward through the Central Sierra overnight and into Mammoth by early tomorrow.

Models move the upper low into Central CA tomorrow (image below) and continued snow showers are expected during the day before ending tomorrow late afternoon or early evening.  It then exits eastward on Thursday with high pressure slowly building into the region into next weekend.

Model QPF for the storm is mostly in the 0.10-0.50” range.  The GFS (image below) has the most at just under half an inch liquid and the ECM operational model has about a quarter inch as does the Canadian model (two images below). The ECM mean is showing about a tenth of an inch as it keeps the snowfall focused over Tahoe where there is a better chance for enough snowfall for powder conditions (Heavenly/Kirkwood is the spot to be).  Only expecting an inch of snowfall or maybe a few inches southward into Mammoth.

The longer-range guidance generally has a spring-like pattern for the rest of April with no clear signs of any significant snowfall.

High pressure will peak on Sunday (image below) with spring conditions expected across most of the mountain. Only slightly cooler weather is expected next Monday and Tuesday with lots of passing clouds at times.

The models then try to move a trough into CA around next Wednesday with the GFS (image below) having it as a progressive system while the ECM develops a cut-off (two images below).  Unless the cut-off stalls in the right place, it will likely be just light snow showers or continued dry conditions.

The pattern in the fantasy range shows a long-wave trough well off the West coast and a flat high-pressure ridge over CA for the period (image below).  That would mean continued dry weather and spring conditions with a weather system likely moving north of Mammoth and into the PacNW every few days.

The latest snow measurements for the eastern Sierra are not great (image below).  The snowpack is melting fast and we have about 10” less snow water content than this time last year and almost 15 inches below average.  I hope we can make it to Memorial Day as promised.  WG 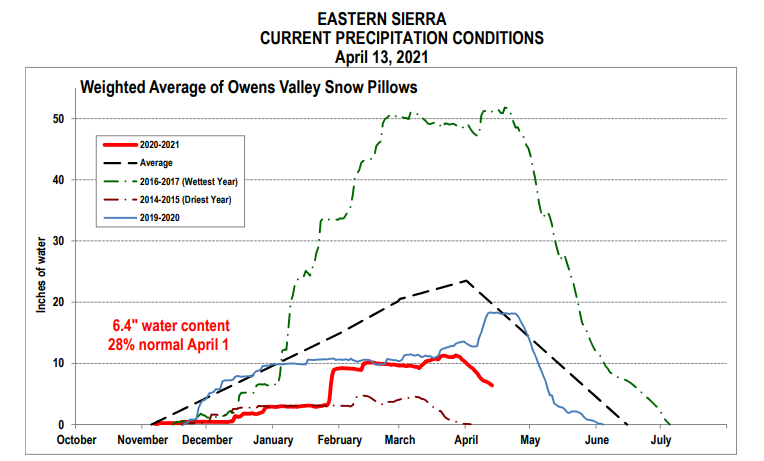