The base at 9000 feet is sitting at 39 inches this morning, expect a couple more weeks of full coverage and then the game of pushing snow around to stay open will begin at Main Lodge. The snow line is solid right around 8000 feet now with a mix of dirt and snow patches down to about 7500 fee.

Mammoth Mountain Weather: Expect to see skies cloud up this morning in the Mammoth and June Lakes areas with a chance of rain and snow showers later today. The showers will be hit a miss around the Sierra Crest in Mono County. There could be a few isolate areas that pick up several inches of snow while most locations will get just a dusting at best.

Expect a warming trend to start on Thursday and that will last into early next week as a ridge of high pressure will move into the area bringing back full on spring conditions for the final weekend of winter activities at Canyon and Eagle lodges.

Highs today will be in the 20s into the low 30s around Main Lodge with the 40s in Mammoth Lakes with the low 60s in Bishop. Starting on Thursday expect highs to come up 3-5 degrees each day into Sunday.

Winds will be moderate today and then the normal light to moderate speeds during the PM hours into the weekend with SW winds 15-25 MPH. 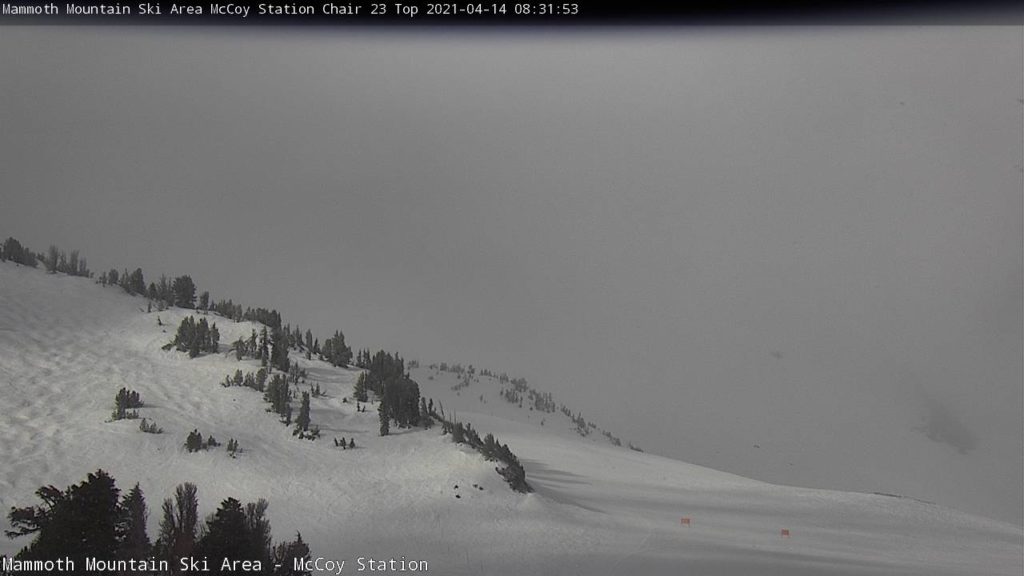 Mammoth Mountain Snow Report: Closing day for winter sports out of the Main Lodge has been set for Memorial Day, with Canyon and Eagle Lodges closing on Sunday, April 18th.

Out on the hill, it has significantly cooled off the last couple days and that has firmed the snow pack up. Not expecting much of a thaw today, but by Thursday the snow should start to get soft again with some sweet corn snow expected Friday into next Sunday.

If you’re coming up this weekend I would spend your early mornings over on chair 9 as the snow will get soft in that area first. Gold Hill has been great as have been the groomers lower down on 9 and off of 25.

The Faces of 3 and 5 have been nice with soft spring snow along with some bumps forming in West Bowl and on the Face of 5.

Up top it’s been more firm then soft over the last 5 days, Sunday was the best with a good melt. I would expect by Friday / Saturday to see it get real soft again with some nice spring turns again later in the morning hours.

At this time of year, it’s highly recommended that you wax up daily to avoid bogging down in the spring snow. Having your bases restructured for spring will also help big time so you can enjoy the spring snow season.

**Have you purchased your Ikon Pass Yet? If you’re getting a new one they will be good starting April 12th, here is the link to get your pass. **

PS: I have been cleared to start skiing again next week, looking forward to getting You some fresh photos and videos from the hill. Yahoo Let’s rip it up…