Tue 12/29 and Wed 12/30 – No snowfall expected both days except for a slight chance for lingering snow showers very early Tuesday.

The infrared satellite image (below) this afternoon shows a remnant cold front draped across the Central Sierra with light snowfall currently falling in Mammoth.  The system will continue to move eastward for the rest of the day and snowfall will end this afternoon.  Overall, it looks like about 5” will fall at Main and ~8” up top.

The next system is visible on the image above moving into the eastern Pacific and it is entraining some subtropical moisture in the southwest flow ahead of the main storm as depicted by the clouds just south of the stationary front.

The ECM and Canadian (image below) models move a weak wave in this moist southwest upslope mountain flow tomorrow into the Sierra resulting in some snowfall for Mammoth.  The GFS is much weaker with this flow and only has clouds/flurries while the ECM and Canadian models are suggesting a few inches.  The forecast favors the wetter solution under the lower 500-mb geopotential heights.

The ECM model moves the main upper level low onto the coast early Monday morning (image below).  By that time, the main jet stream will have already moved southward into Baja and only a weakening front will make it over the crest in the now southeast upper level flow.

The GFS model is the driest showing about 0.50” (image below) for the event while the ECM and Canadian have about 0.75” (two images below).  The forecast leans slightly toward the wetter models with a few inches expected during day Sunday followed by a few more overnight and Monday. Overall, most of the energy will be moving into SoCal and a big storm is not anticipated with Big Bear probably getting more than Mammoth.

There is a slight chance for a lingering snow shower Tuesday morning in the wraparound flow, otherwise dry weather returns and will continue Wednesday.  While it won’t be a deep powder day Tuesday, fun turns are likely to be found.

The models are mostly in agreement that an upper-level trough will move through NorCal later Wednesday and then southward through the Sierra early Thursday (image below) for chance for light snowfall.  If it digs southward farther westward off the coast, amounts might be larger, otherwise it will just be a dusting or an inch/two.

New Years’ Day is looking dry, then the longer range guidance generally digresses over the following weekend.  The ECM model is by far the most aggressive and snowiest as it breaks through the westerly jet stream into NorCal by Saturday (image below) followed by a strong trough passage on Sunday and into the following Monday (two images below).

The GFS model though is much weaker and farther northward and the Canadian model is showing an upper-level ridge, so that are massive differences in potential solutions for next weekend ranging from heavy snow to continued dry weather.

The ECM model keeps it going with another strong trough for potentially more heavy snowfall toward the middle part of that week (image below)  The GFS ensemble is not as bullish, but does show a westerly jet into CA at the same time (two images below) while the Canadian is farther northward again and mostly dry.

So what gives?  The model differences likely lies with their respective forecast of the MJO over the next two weeks.  The MJO is currently not active, but is forecast to become more active in week two that spans the first part of January with the ECM model keeping it in phase 3 (image below) while the Canadian is totally different and moves it back into phase 5 (two images below). The GFS is closer to the ECM solution, but moves it into phase 2 first before it moves it into phase 3 around the 3rd of January.

Looking at the forecast MJO positions overlaid on my handy MJO phase/precipitation chart, the apparent differences in the precipitation solutions from the models becomes more clear.  The wettest ECM model (purple circle) keeps the MJO in the wetter phase 3 while the dry Canadian (blue circle) has it positioned in the drier phase 5.  The GFS (black circle) skirts the wetter ECM solution with the track farther westward into phase 2 before coming back into phase 3. 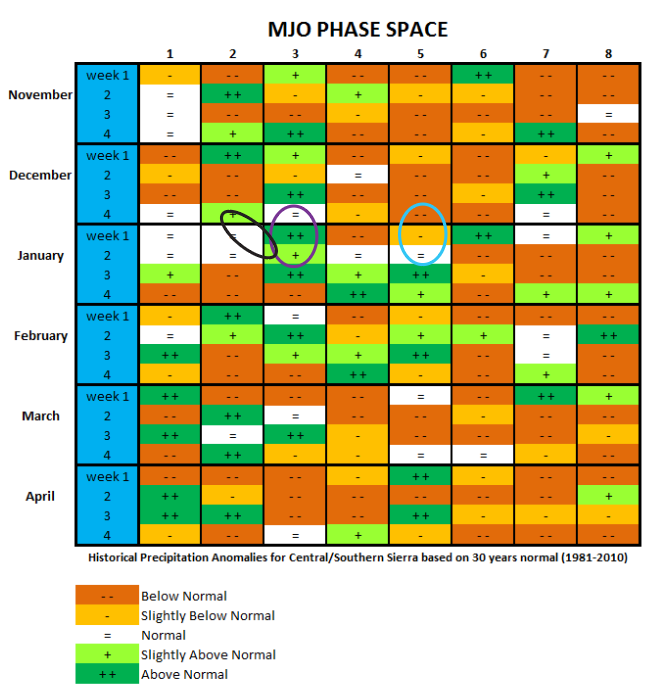 Lately, the GFS has been forecast the MJO the best, although that signal is generally poorly forecast in general.  Hopefully the ECM will be right this time and we finally get that big storm Mammoth needs so badly right now.  WG