The visible satellite image (below) this afternoon shows a dissipating front stretching from the Salinas Valley northeastward toward Tahoe. That front is forecast to move slowly southward overnight and early tomorrow toward the Mammoth area where only light snowfall is now expected. 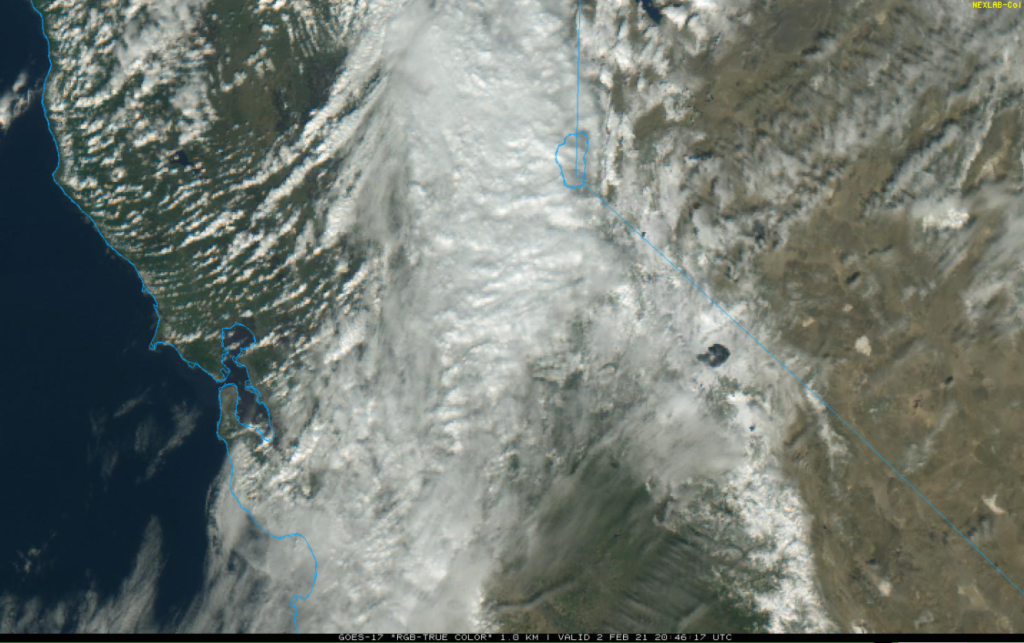 The models from the last post were wrong about the strength and trajectory of this system with the upper level low splitting off the coast and not coming ashore. A trailing system will move north of Mammoth tomorrow for colder temperatures and stronger winds, but no snowfall.  The GFS models is showing about a quarter inch of liquid now (image below) and the ECM has slightly less.  Looks like a couple inches of snowfall only now.

High pressure will then build into the area Thursday with the ridge strengthening off the coast Friday (image below) and into the weekend with weather systems move southward from central Canada well east of the Sierra. Looks like freezing levels will get near 10,000 feet this weekend resulting in seasonably mild temperatures on the hill.

The longer-range guidance can be described as generally low confidence.  The models are suggesting that a weak weather system may be able to move through a weakening ridge of high pressure early next week (ECM model below) as what appears to be a minor breakthrough of the westerlies.

The GFS model is slightly deeper while the Canadian model is weaker and slower by about 24 hours.  The GFS ensemble mean (image below) is similar to the ECM solution and favors the weak breakthrough of the amplified West Coast ridge.  However, it is only suggesting very light amounts of precipitation (two images below) and likely only a couple to a few inches of snowfall.

The GFS ensemble is suggesting there could be another weak system moving into CA in the weak zonal flow around Thursday or Friday next week (image below).  The ECM model (two images below) has a fairly unbelievable solution showing a high latitude system moving westward against the flow into CA due to the strong blocking ridge in central Canada.  Overall, the lack of a consensus forecast usually means the models are unable to sense a strong weather signal in the pattern and we will have to see how it evolves.

Right now, significant snowfall is not looking likely into mid-month with the GFS ensemble favoring NW flow in the fantasy period and the longwave trough in the center of the country (image below). That would only mean weak systems clipping CA from the drier NW direction.

And the climate models generally are not showing anything of note for the rest of the month.  However, those models did not capture the big storm last week beyond 2-3 weeks and with another disruption occurring today in the polar stratospheric vortex along with a possibly more coherent MJO signal coming out of the western Pacific in the next week or two, it is unlikely the models are picking up on the long-term teleconnection pattern.  Hopefully there will be a surprise pattern change in the next couple of weeks.   WG

The New Sign is up at the Top of Mammoth Mountain