Sat 2/27 through Tue 3/2 – No snowfall expected all days except for a chance for flurries Tuesday afternoon and night, no accumulation expected.

The visible satellite image (below) this afternoon shows clear skies over most of the state with clouds over the Great Basin associated with an inside slider type weather system moving southward well east of California. 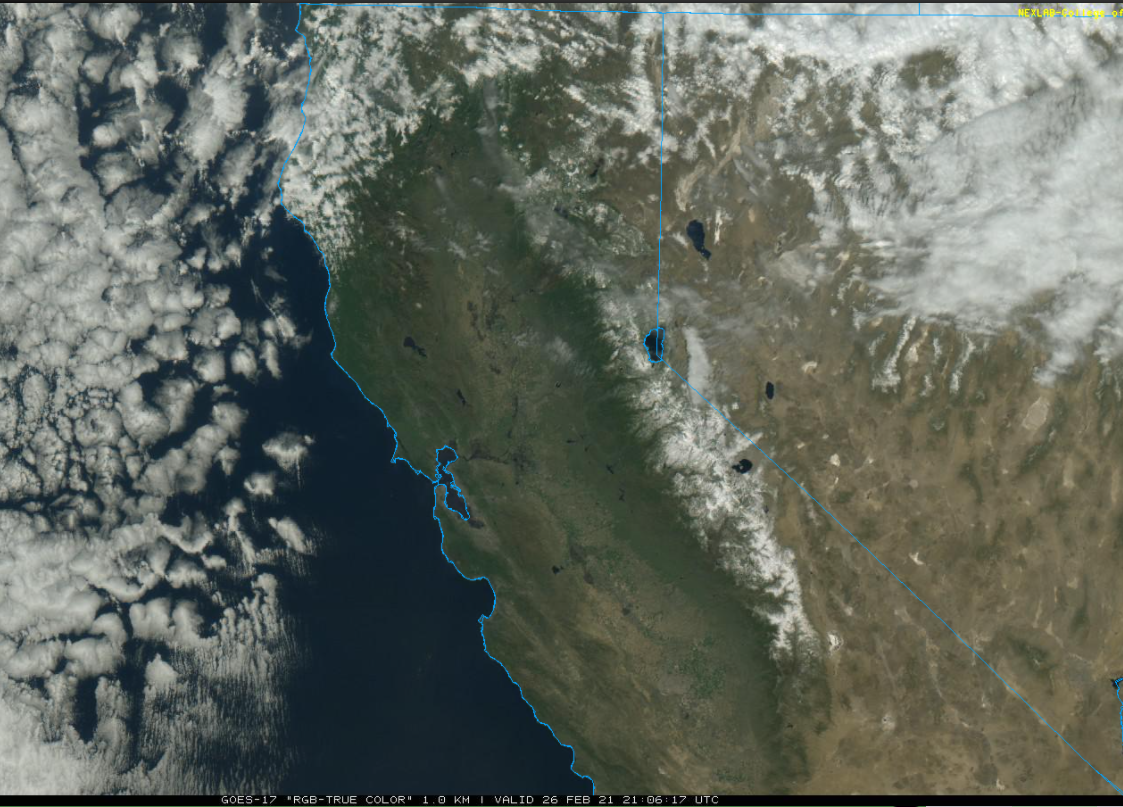 Another slider type system will move through the Sierra tomorrow before moving into Arizona (image below) by Sunday with a transitory high-pressure ridge moving into CA in its wake through Monday.  That will result in colder temperatures tomorrow in addition to gusty north/northeast winds followed by warmer weather back to seasonable levels and lighter winds Sunday and Monday.

The guidance then moves the next upper-level trough southward off the CA coast Monday night and Tuesday (image below) and far enough off the coast that there will likely be no snowfall and only clouds.  Tuesday could be a flat light day from extensive middle/high cloudiness including flurries.

The longer-range guidance is still suggesting that the dry period will finally come to an end toward the end of next week or over the following weekend after likely staying dry through mid-week.  However, there is a slight chance for flurries or light snow showers Wednesday night and into early Thursday (image below) if the upper-low that will move through SoCal is far enough northward for some wrap-around precipitation.  GFS has some, ECM does not.  It won’t be enough for powder conditions anyway.

The models are then in general agreement that an upper-level trough will move through CA and Mammoth either Friday or Saturday. The GFS and Canadian models are slightly faster with the passage while the ECM model is the slower one (image below) by about 24 hours.  This solution is well supported by the GFS ensemble mean (two images below).

Unfortunately, the models are suggesting that the upper-level low will have limited moisture and are not predicting large amounts of precipitation at this time.  The 12Z run of the GFS has about a quarter inch liquid (image below) and the Canadian model is similar (two images below) and keeps most of the precipitation on the west side of the Sierra.  The 12Z ECM has a little over a half an inch of liquid, similar to the GFS ensemble mean (three images below).  So right now, it is looking like low-end powder conditions at best.

That could allow solutions to happen like the GFS operational has been hinting about for a few runs now of developing a very deep trough along the CA coast (image below) just before mid-month.  That would result in a big snow storm under very low-snow levels.

The GFS model is not showing major amounts for the period right now (image below) and about 3” liquid while the GFS ensemble is showing slightly less (two images below).  Regardless, there have not been a lot of powder days this season and hopefully the mantra “better late than never” will serve us well in March. WG