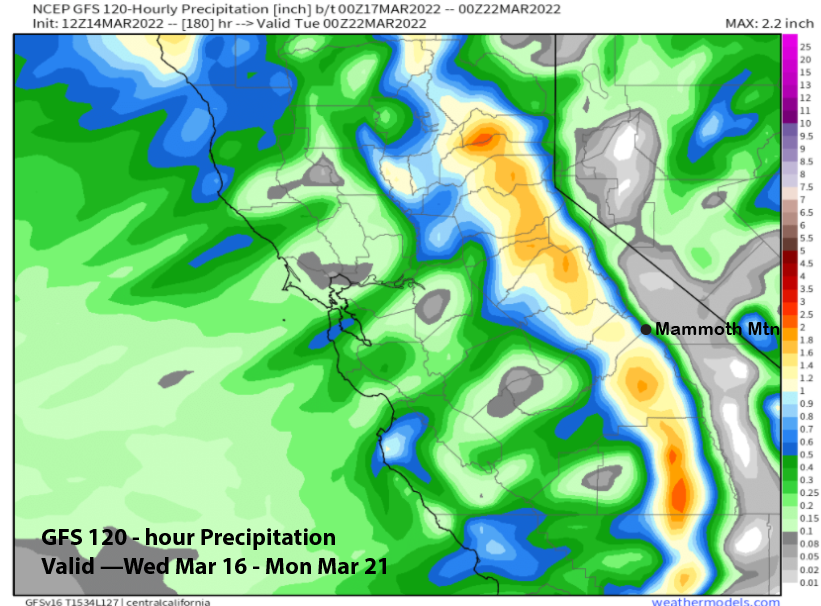 Tue 3/15 – Light snowfall during the afternoon.  Accumulations 0 – 1” by Wednesday morning

Wed 3/12 through Fri 3/14 – No snowfall expected all days except for a chance for flurries Thursday afternoon, no accumulation expected.

The infrared satellite image (below) today high pressure holding over the state and a frontal system situated in the eastern Pacific moving toward the coast.  That system will move inland early tomorrow and through Mammoth by tomorrow evening.

It is a weak and dying storm, but probably will have enough dynamics to squeeze out some light snowfall tomorrow afternoon.  Model QPF is quite low with the GFS (image below) showing about a tenth of an inch and the ECM (two images below) only a couple hundredths.  Not expecting more than a dusting to an inch accumulation. 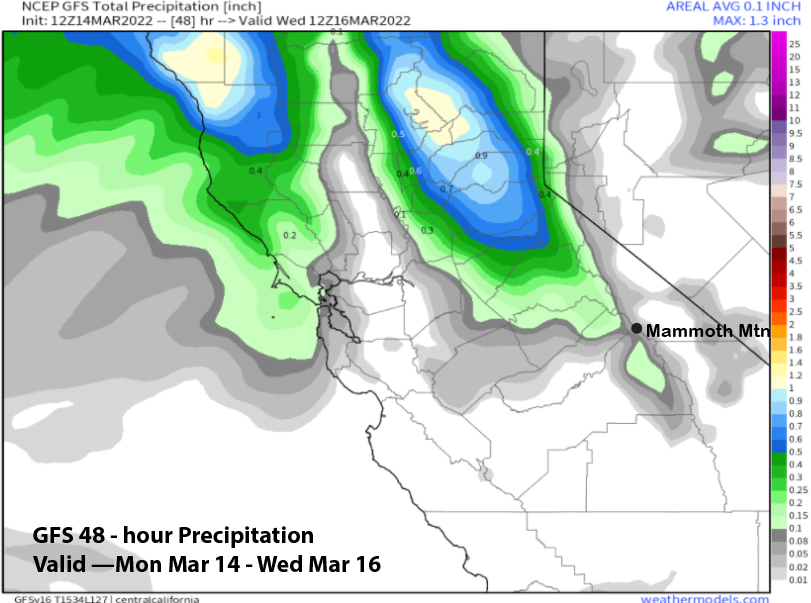 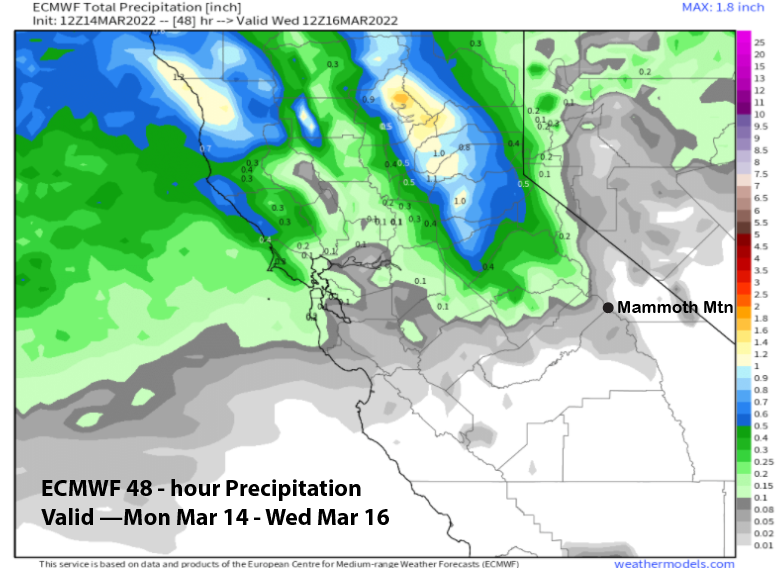 Wednesday should be dry and most of Thursday as well with just a chance for flurries during the afternoon from a very weak passing short-wave trough (image below).  Dry and warmer weather is then forecast for Friday out ahead of a storm system expected to move through Mammoth this weekend.

The longer-range guidance is a mixed bag of news with a storm this weekend that doesn’t look to be huge, followed by spring next week, then maybe a return to winter in the fantasy range.

While the guidance is in agreement that a trough of low pressure will move through the state on Saturday and into Sunday, they are not in agreement with the details of how it will play out.  The latest 12Z run of the ECM model has trended weaker versus previous runs and shows a rather mediocre trough (image below) moving into CA early Saturday. The GFS model (two images below) is deeper and farther southward than the ECM model while the Canadian is in between the two, leaning slightly toward the weaker ECM.

Model QPF shows these differences as well with the GFS model (image below) the wettest at around 0.75” and the ECM the driest at only around a quarter inch (two images below).  The Canadian has about half an inch of liquid.  So the snowfall range is about a couple inches per the ECM to almost 8” per the GFS. 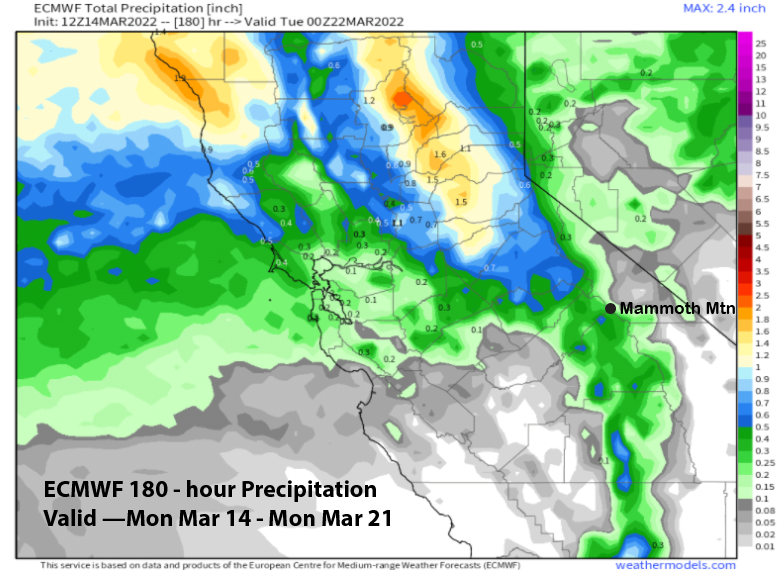 Current forecast follows the GFS ensemble mean (image below) that favors a deeper trough versus the ECM, but not as deep as the operational model run.  That model is showing about half inch of liquid or around 4-5” for Main and maybe up to 7” up top and it should be enough for at least low-end powder conditions.  Snow levels will be around 5000 feet and getting colder on the back-end of the storm, so it won’t be a super heavy snowfall and will be rather typical for Mammoth.

Snow showers may continue Sunday, but most of the accumulation will happen late Saturday afternoon and night.  ECM is much faster with the moving the system eastward with the GFS much slower.  It closes the system off on Sunday and develops wrap-around snowfall.  So there is a chance for another inch or so of snowfall Sunday.

Dry weather returns Monday and should then continue through mid-week including warmer temperatures as a strong ridge of high pressure is forecast to build just off the coast by mid-week (image below).  That would result in spring conditions for all of the mountain.

So there is a chance that we could revert back to winter as early as the weekend of the 26th and more likely over the last week of the month. This does line up with the just released EPS 45-day forecast that has slightly above normal precipitation week 3 (image below) or the very last part of March and into early April. That model keeps some snowfall going through week 4 too (two images below) and the control run has over 4” through mid-April.  Wouldn’t that be nice. WG 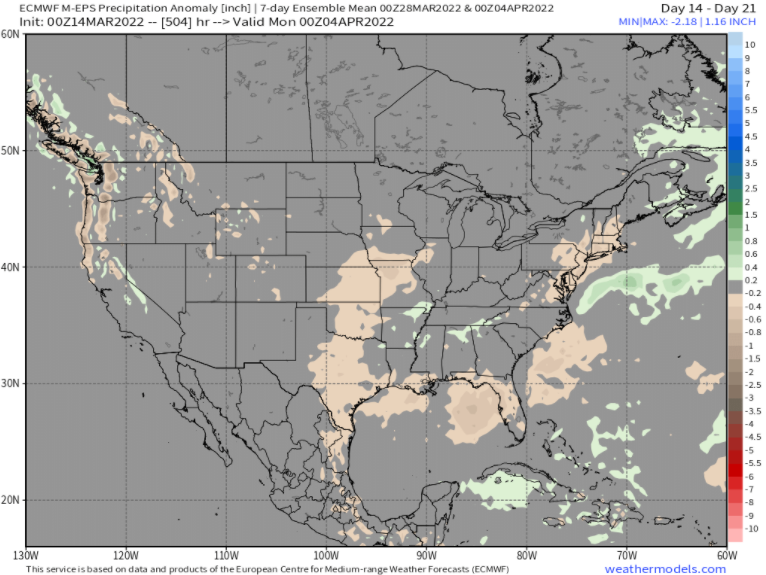 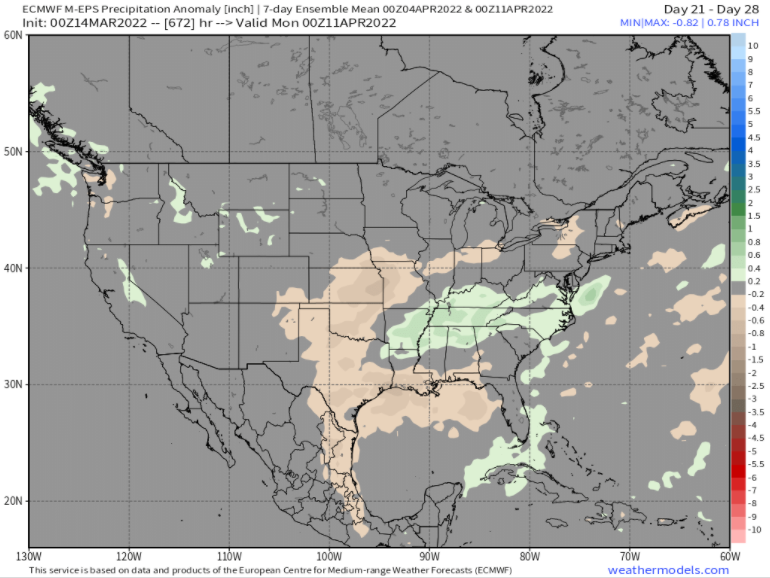