Wed 12/23 and Thu 12/24 – No snowfall expected both days except for a chance for flurries Thursday afternoon.

Fri 12/25 – Dry with increasing winds during the morning, then snow develops during the afternoon and increases during the evening, becoming heavy for a bit overnight before decreasing early morning.  Accumulations 8 – 10” by Saturday morning at Main, 12”+ up top

The visible satellite image (below) this afternoon shows fog over the San Joaquin Valley and clear skies over the Sierra and rest of California.  Fair skies and breezy NE winds should continue through tomorrow. 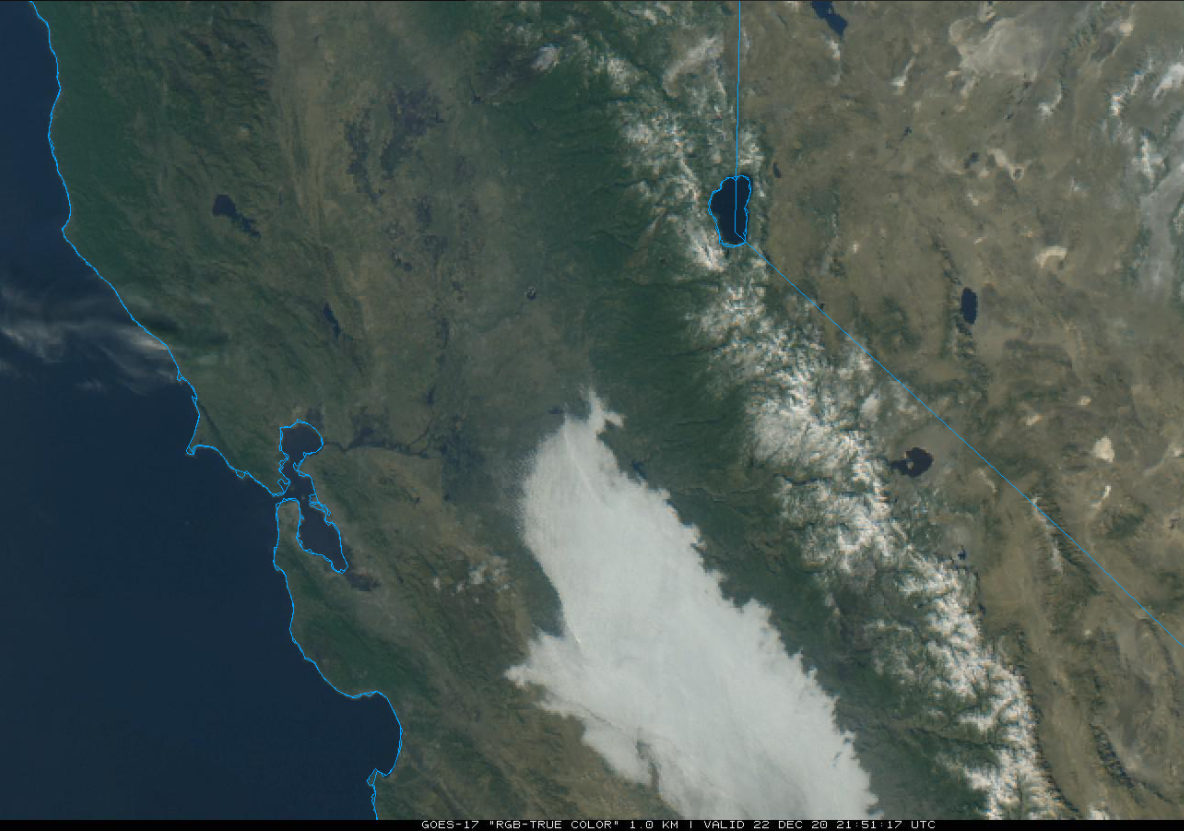 A weak low-pressure system will move toward the SoCal coast Thursday (image below) and lot of middle and high cloudiness is expected to spread over CA and the Sierra during the day.  No snowfall is expected other than a chance for flurries.

Models are now in agreement that a stronger storm system will then impact Central and Northern California on Christmas Day and night as the jet stream undercuts a high pressure ridge in British Columbia (image below).

The guidance is moving the westerly jet farther southward now into the central Sierra by early Saturday (purple arrow) and that means the forecast snowfall amounts for Mammoth have become more favorable.  Both the GFS (image below) and the latest ECM models are showing around an inch of liquid with the passage.  Due to the strength of the jet, I would not be surprised if amounts come in higher.

The heaviest snowfall is expected to occur overnight Christmas and should start to decrease during the morning hours before lifts open.  Then snowfall should taper off and end during the afternoon. About 10” should fall at Main with well over a foot up top resulting a “low-tide” powder day on Saturday—be careful out there.

After a brief break Saturday night and early Sunday, a second storm system is expected to approach CA during the day Sunday. Models are suggesting it will take a more southerly path through SoCal on Monday (image below) versus the previous storm.

While a more southerly track is generally a good thing for Mammoth, there are suggestions that the system may move too far southward before it moves far enough eastward to generate good upslope flow and orographic precipitation/snowfall.

The ECM model is the farther east and the Canadian model is similar.  However, the GFS model shifts the dynamics southward fairly quickly Sunday night and essentially misses the southern Sierra with a brush job for Mammoth (image below) and very light precipitation amounts.  Many of the EC ensembles are showing the same thing while the deterministic run has about an inch of liquid.

It is still many days out so the details will change.  The ECM and Canadian (image below) show over 2” liquid for the 10-day period and close to 2 feet of snowfall and that is the best-case scenario.  Worst case scenario would be only a few inches of snowfall with the second system as suggested by the GFS.  Multiple feet of snow appear unlikely this weekend.

High pressure should then build into the area Tuesday and Wednesday next week with the next chance for snowfall toward the end of next week. However, the latest guidance moves the system (image below) into NorCal and suggests only very light amounts for Mammoth, if any at all.

The longer-range guidance is then mixed in the 11-15 day range. The GFS ensemble builds a ridge and keeps it in place across CA until about January 6-7th when it flattens it out again with the flow generally north of Mammoth (image below). The ECM is more progressive and has a chance over the following weekend.  Right now, the forecast favors the GFS ensemble that has been generally doing the best lately, although that model may be holding onto the ridge for too long in early 2021.  WG