Fri 2/19 – Dry through the morning hours and early afternoon, then there is a chance for light snowfall by late PM and overnight.  Accumulations 2 – 4” by Saturday AM.

Sat 2/20 – A chance for lingering snow showers during the morning, then dry weather likely returns by the afternoon and night.  No meaningful accumulation expected.

The visible satellite image (below) this afternoon shows some passing clouds along the coast with generally clear skies over the Sierra displaying the winter snowpack.  High pressure has built into the state today behind the weak system yesterday that produced the light snow/rain showers and wind. 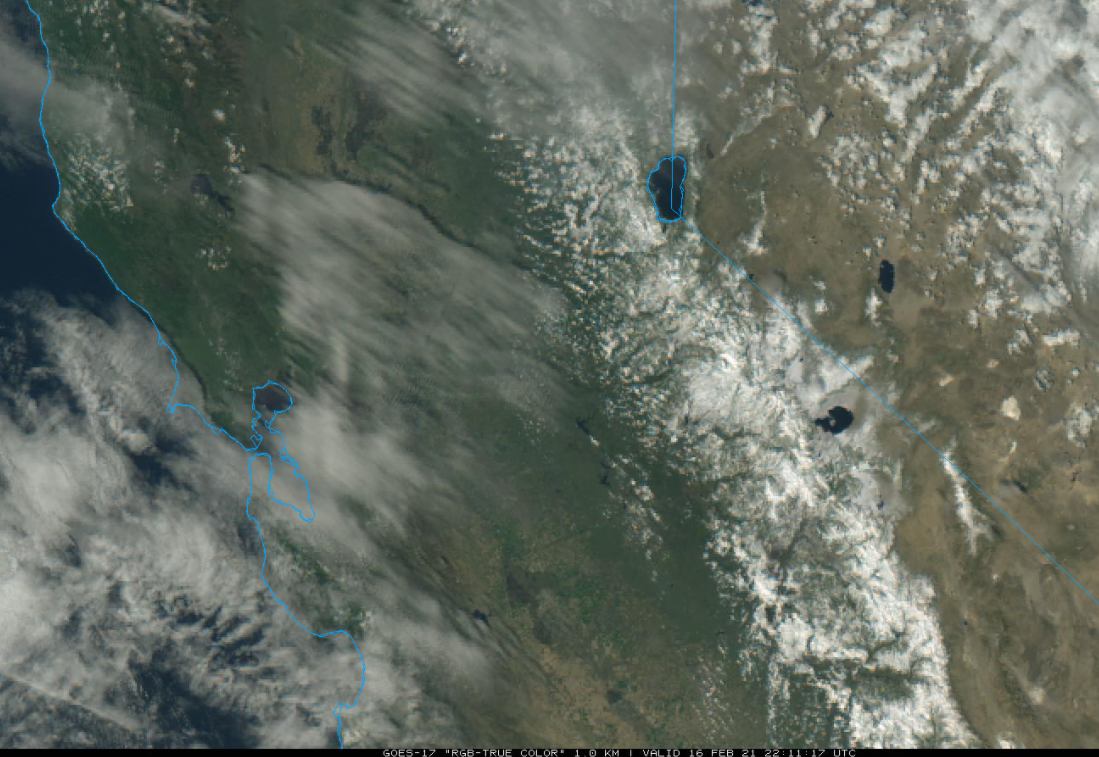 The high pressure ridge will hold in place through Thursday for fair and dry weather along with winter-like temperatures today and tomorrow followed by warmer weather on Thursday when temps will get into the low 40s at Main.

The next storm will move into NorCal on Thursday night and then southward into Central California on Friday with the tail end of the initial front moving into Mammoth late Friday afternoon and evening while dissipating.  A trailing upper-level trough (image below) will then swing through the Sierra Friday overnight and early Saturday to re-invigorate the stalled cold front.

The end result will likely be some light snowfall Friday late PM and evening followed by another period of snowfall overnight and early Saturday adding up to a few inches.  If the trailing trough doesn’t dig far enough southward, then it may remain mostly dry for the event as suggested by the Canadian model (image below) that is only showing trace amounts of precipitation from the storm.

The forecast follows closer to the ECM and GFS (image below) forecasts that are showing between a quarter and half inch of liquid and a few inches of snowfall.  A few ECM ensembles are showing higher amounts and over six inches of snowfall, but right now, deeper powder in not expected.  It will still probably result in some fun turns Saturday.

The longer-range guidance is favoring a period of dry weather to start on Sunday and probably last through at least mid-week followed by a chance that light snowfall could return by the end of the week or following weekend.

The ECM and other models build a fairly strong high pressure ridge into CA on Sunday and  Monday (image below) that will result in fair weather and warmer temperatures, although  temperatures and freezing levels don’t look exceptionally high right now and only around 10K on Monday.  Regardless, the snow on the lower runs by Canyon and Eagle may get spring-like during the afternoon.

The models are then suggesting an upper-level trough will move southward toward the latter part of the week, but differ on the details.  The ECM model has a slider-type system move east of Mammoth on Wednesday for cooler weather and some NE winds.  It (two images below) then develops a weak cut-off along the coast by the end of the week with the main long-wave trough across the center of the country shifting westward.  While that solution is dry for the week, it could lead to snowfall in the 11-15 day pattern.

The GFS model is father west with the “slider-type” system and has enough over-water trajectory and upslope flow to generate some light snowfall Wednesday night and into early Thursday adding up to a couple inches.  This solution is decently supported by the GFS ensemble mean (image below) that also places the trough father westward than shown by the ECM.

Regardless, a big snowfall event is not looking likely right now with a dust on crust event more likely if snowfall does occur.  That is reflected by the current forecast of 0-2 inches for the end of next week.  The GFS mean then keeps northerly flow in place over CA through the following weekend that could mean some more light snowfall, but a better chance for cold temps/wind.  But that is a far ways out in time for a confident forecast.

The longer range fantasy guidance does weakly retrograde the long-wave trough westward over the West Coast early over the following week (image below).  It is not bullish yet on anything significant, but that is typical in the longer forecast time periods and a weak trough is better than a ridge.

The GFS ensemble mean then keeps the weak trough in place through the end of the period for continued chance for weak storms.  The model is showing about 1.5” liquid (image below) for the total two-week period with most of it falling in early March. While there may be some more snowfall in February, right now, anything significant leading to deeper powder days may have to wait until March.  WG

Mammoth Mountain Long Snowfall Outlook from the EPS and GEFS