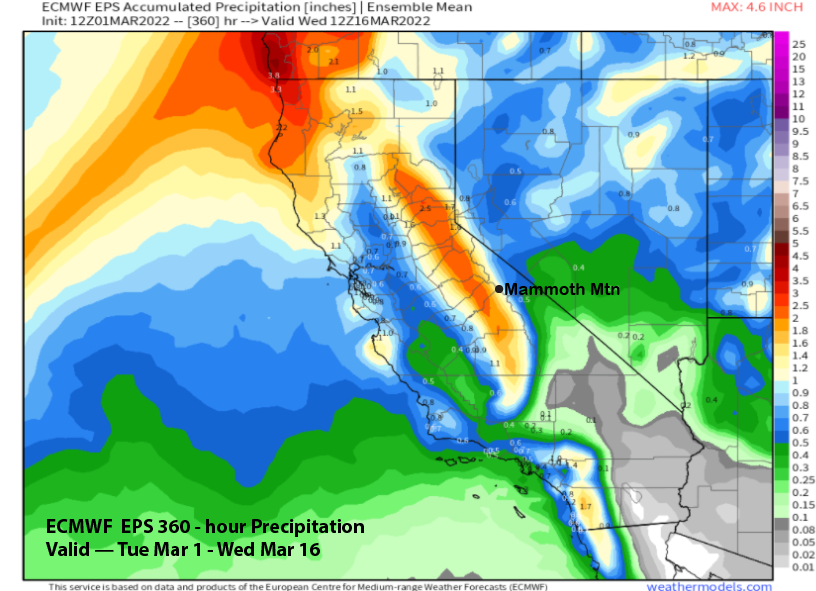 Wed 3/2 and Thu 3/3 – No snowfall expected both days until late Thursday night when snowfall may develop, accumulations 1 – 2” at Main by Friday AM.

Fri 3/4 – Snow is expected to increase during the day and into Friday evening before tapering off by early Saturday.  Accumulations by Saturday AM 4 – 8” at Main, 6 – 10” up top

Sat 3/5 – Snow showers are possible during the day before ending Saturday evening.  Accumulations 1 – 2” by Sunday AM

The infrared satellite image (below) today shows high clouds streaming across the state under a high-pressure ridge with a band of clouds in the eastern Pacific associated with an AR that is moving into the PacNW.

Dry weather will continue through most of Thursday before the ridge of high pressure slides eastward in response to a short-wave trough that will split from the jet stream and move into Central CA by early Friday (image below). It appears the Canadian model was the most correct about this potential weather system from the last post on Friday as the other models washed it out or had it move into the PacNW.

There will also be a kicker short-wave trough to move through the state on Friday night and into Saturday that will also usher into the area much colder temperatures.  The trough of low pressure may finally move eastward on Sunday (image below), although the ECM/Canadian models keep it hanging back over CA into Monday.

The exact track and strength of the first short-wave trough on Friday is still not exactly certain with the GFS a bit farther northward and stronger than the ECM model.  It is also a bit stronger with the second trough on Friday night, although both models are similar with the position of the system.

Those differences are reflected in the Quantitative Precipitation Forecast (QPF) from the two models with the GFS (image below) showing about double the liquid amounts at around 1.25” versus the drier ECM model (two images below).  The Canadian model is closer to the drier ECM. 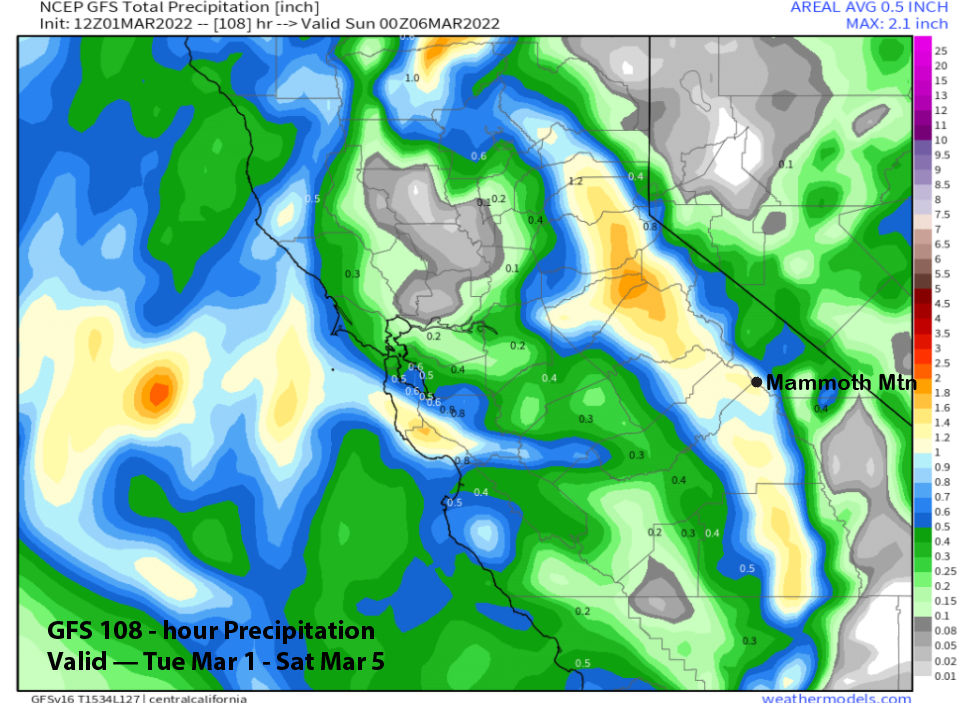 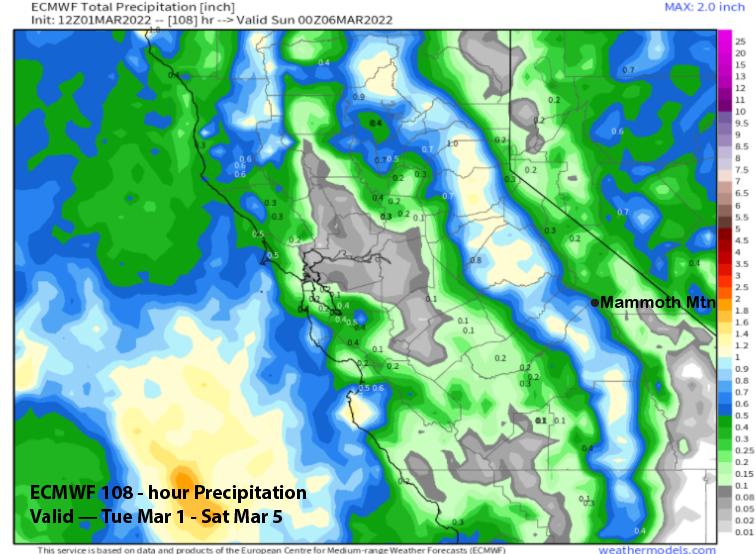 Forecast follows a blend of ECM ensemble mean and the operational model with over half an inch total and probably around 6” of snowfall at Main, 8” up top.  It should be enough for at least low-end powder conditions with the powder fields up top nearly boot deep.  Friday will be a riders of the storm day with most of the snow falling Friday late PM/evening.

It will be cold Saturday with lingering snow showers that should end on Saturday evening.  Another inch or two is possible, but most of the snow will have already fallen.  Should be a good day as winds don’t look too strong either after blowing hard Friday night.

The longer-range guidance is generally a mixed bag with some additional chances for snowfall through mid-month, but no slam dunks.  However, the month as a whole does not look as bad as January and February.

The ECM and Canadian models do keep a chance for light snow showers in the forecast through Monday, but the GFS is dry with the long-wave trough progressing eastward and high pressure building into the state.

The models diverge a bit more toward the middle part of the week with the GFS model (image below) moving a deep high-latitude short-wave trough into CA around the middle part of next week with snowfall while the ECM has it as a inside slider type storm (two images below) and is dry.  The Canadian model, that was right last time, doesn’t have the trough at all and keeps high pressure in place.

Current forecast favors the GFS (image below) and ECM ensemble means that favor an inside slider type storm that could lead to light snow showers, but not a significant snow storm.  Best guess right now is colder temperatures, breezy northerly winds, and hopefully flurries or wind buff.

The longer-range fantasy guidance now develops zonal flow (image below) into the PacNW with weak high pressure holding over CA.  That would be a dirty ridge with lots of high clouds, but the jet stream too far northward to produce significant snowfall in Mammoth.

The guidance does shift the trough closer to the coast and pushes the jet southward (image below-purple arrow) by mid-week that week (image below) and that could eventually allow storms to move into CA.  However, confidence is lower than normal in the extended forecast right now.

The main reason for the low confidence is due to the MJO forecast that has shifted with some of the models and may not move into phases 5-6 now.  Instead, it may move back westward and re-emerge in phase 1 (image below) or phase 2, and each of those phases would force a different teleconnection pattern. But overall, MJO phases 1 and 2 are better for snowfall in Mammoth than phases 5 and 6. WG