Tue 3/15 – Chance for light snowfall during the day and into the early evening.  Accumulations 0 – 2” by Wednesday morning

The infrared satellite image (below) today high pressure is dominating the weather pattern across the West Coast as it extends far northward through the PacNW and into British Columbia. That ridge will hold in place through tomorrow early afternoon before sliding eastward tomorrow night and Sunday.

That is in response to a short-wave trough moving into the PacNW and southward into NorCal by early Sunday (image below) with the precipitation expected to remain well north of Mammoth. An increase in SW winds and probably some wind buff up top can be expected Saturday , with westerly winds getting strong by Sunday morning that may lead to lift holds.

Fair weather and lighter winds return Monday and should continue into early Tuesday, although clouds are expected to increase by Monday afternoon and night.  That is due to weak short wave trough expected to traverse through the Sierra Tuesday and into early Wednesday (image below).

While weak, the system does have a good moisture tap and may be able to produce an inch or two of snowfall.  The 12Z run of the GFS is showing about a quarter inch of liquid (image below) that would equate to around 2” of snowfall. The latest ECM is showing less and only about a tenth liquid or maybe an inch of snowfall.  That is in line with the ECM ensemble mean. 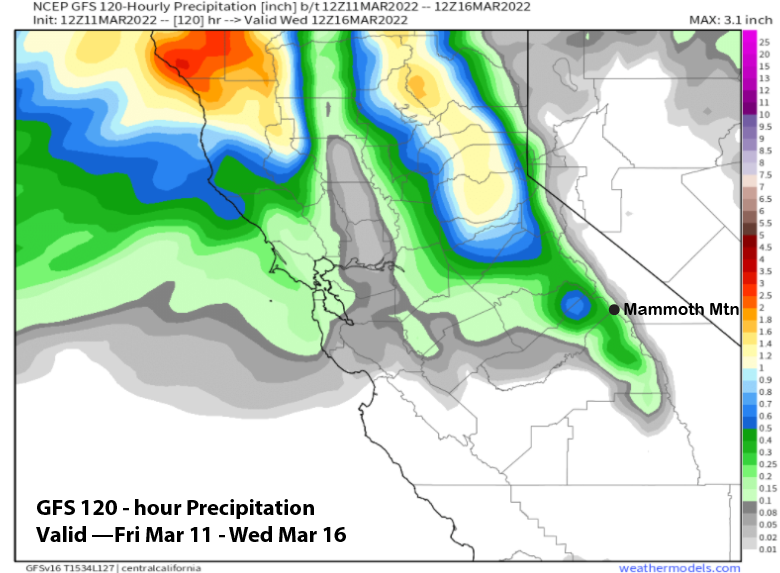 The forecast generally follows the ECM mean with only a chance for light snowfall expected Tuesday during the day, if it happens. There are many dry ensembles that keep all the precipitation north of Mammoth with this weak system, thus a chance for just passing clouds.

The longer-range guidance now has a chance for a bigger storm around for the weekend of the 19-20th. I would not say it is in the bag yet as there is still some uncertainty including good chance that it may end up just a small storm, although there may be factors in our favor this time.

Fair and dry weather along with seasonable temperatures continues Thursday with dry weather likely on Friday too, although temperatures may be warmer including spring conditions on the Canyon/Eagle side of the mountain during the afternoon.

Changes then occur by Saturday as a deeper trough of low pressure is forecast to set up by the models along the West Coast.  Models differ with a few things, primarily about timing and how far southward the trough will dig into Central CA. Even though it splits the trough and is slower than the GFS, the latest ECM run model is far enough southward (image below) for at least decent snowfall on Saturday night and into Sunday showing around 0.75” liquid (two images below) that would equate to around 6” of snowfall at Main. 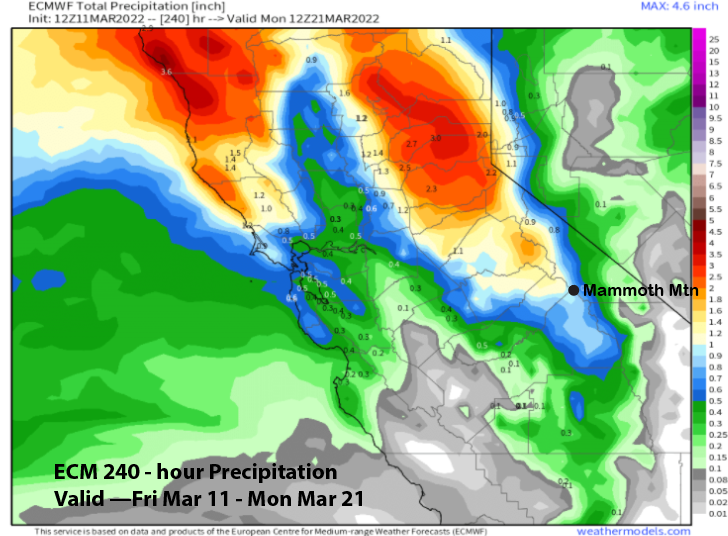 The 12Z run of the GFS (image below) is stronger and more consolidated than the ECM run, but has the jet stream (purple arrow) farther northward. The “just off the press” 18Z run (two images below) is much stronger and farther southward versus previous runs and the other models and has over an inch of liquid at Main or around a foot of snowfall.  The worst model is the Canadian that keeps the trough off the coast until Sunday night and Monday and mostly to the North.

Current forecast of 3-12″ of snowfall is a blend of the ECM mean (image below) that is not showing a lot at around a third of an inch liquid and the wetter operational models. The GFS mean (image below) is showing a nice trough southward along the West Coast and the jet stream far south enough for good snowfall potential, so I would say at least low-end powder conditions could happen. 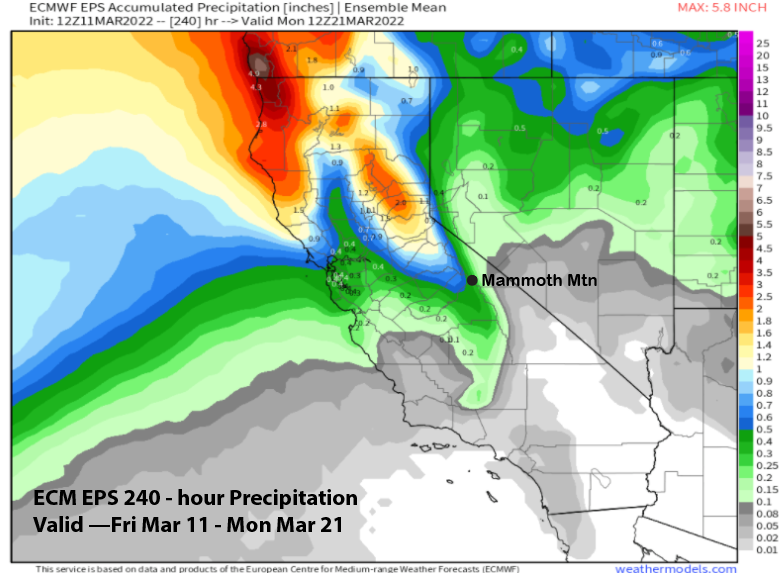 The other wildcard that may work in our favor for stronger solutions to verify is an emerging MJO signal over the Indian Ocean (image below).  Models are now in consensus, after showing differing solutions only a few days ago, that the signal will amplify and move through phases 2 and 3. Those phases are usually good for snowfall in the Sierra.

The longer-range guidance is showing the trough moving eastward early over the following week and a ridge building over CA (image below) for a likely return of fair and dry weather.  The guidance does flatten the ridge at the end of the period (image below) and develops zonal flow into the West Coast with the jet stream into NorCal.

That would mean storms could return by the end of that week or next weekend, although the guidance is far from bullish on anything big.  Hopefully it will trend more in our favor as we get closer in time.  WG