The infrared satellite image (below) this afternoon shows the storm system that produced over a foot of snow at Main Lodge now positioned eastward into Nevada and Utah. Tomorrow will be a partly to mostly sunny day with northerly flow keeping temperatures seasonably cold and generally winter-like for most of the mountain.

High pressure (image below) will build into the state on Sunday resulting in fair weather and warmer temperatures into Monday when most of the mountain will be back to typical spring conditions.  Only the northeast facing runs off the top may stay winter-like.

A trough of low pressure will move into the state well north of Mammoth on Tuesday (image below) and the only noticeable effect will be slightly cooler temperatures and increased westerly winds, but nothing too strong, and best case could produce some wind buff up top (e.g., Drop Out 2).

The longer-range guidance says a series of spring-like troughs will continue to move through the northern part of the state every couple/few days for the rest of the month and into early May. While no significant snowfall is currently expected, there could be a surprise storm, with the weather systems generally keeping temperatures seasonably cool for a slower melt.

The ECM model moves a couple short-wave troughs through CA around next Wednesday and Thursday (images below). This is supported by the ECM mean that also shows a trough (three images below). The one on Wednesday should be dry with just breezy winds while the one on Thursday could produce some light snow showers or flurries in addition to stronger winds.  Right now, any snowfall will likely be just dust on crust as model QPF is very light or dry. 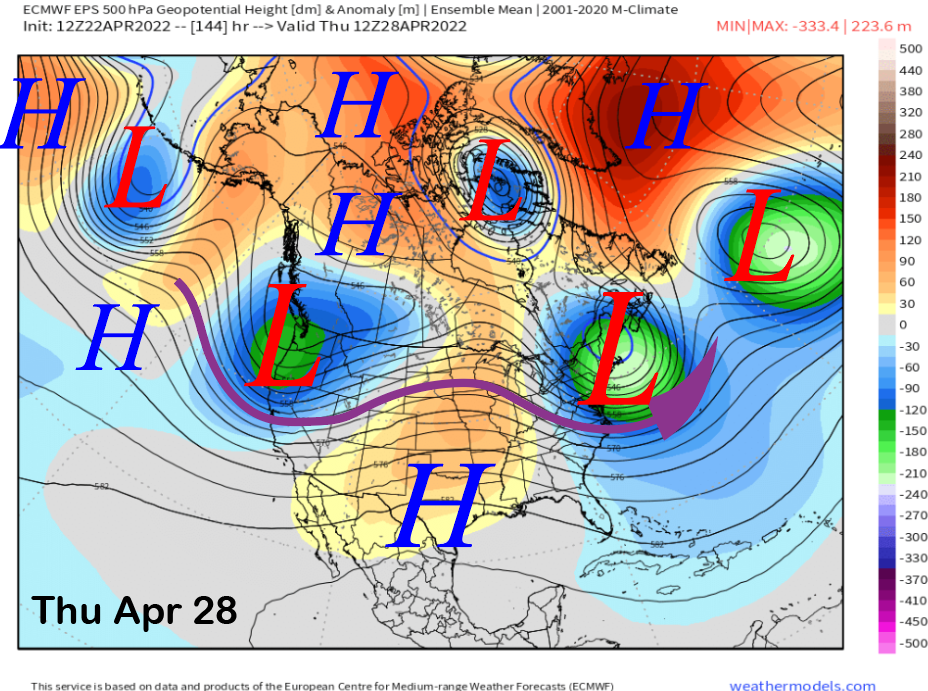 The ECM operational model moves a trough slightly farther southward over the following week3end (image below) and the model QPF shows maybe an inch or two.  These type of storms are very typical for mid-spring with light snow along with gusty winds.

The longer-range ECM ensemble mean keeps an active pattern into the West Coast during early May (images below) with most of the storminess well north of Mammoth.  It would not be surprising though if one of these systems slips farther southward as climatologically, the best chance for May powder is generally the first week or so of the month. 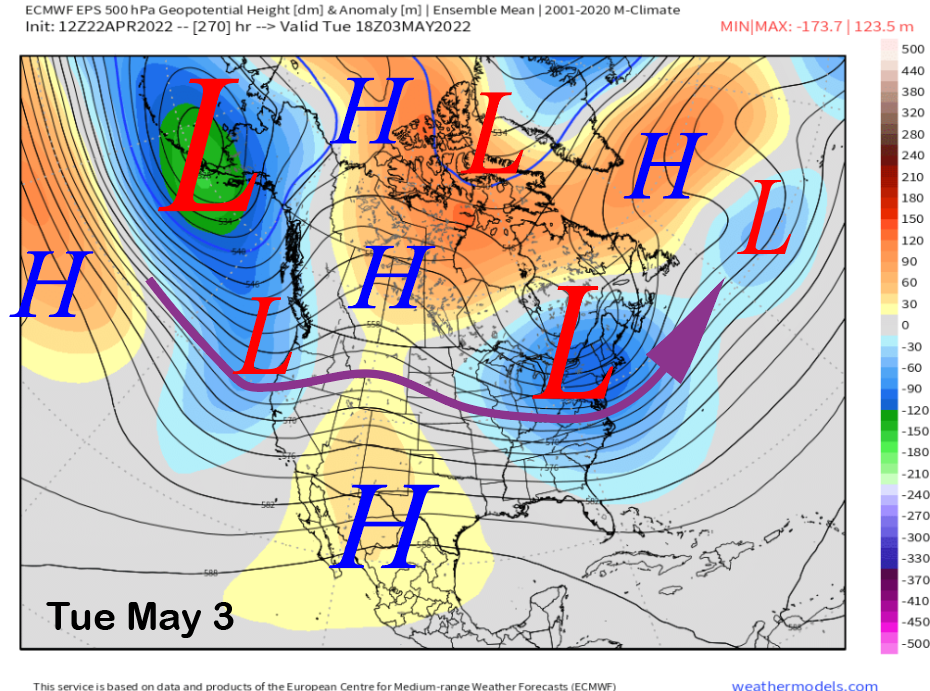 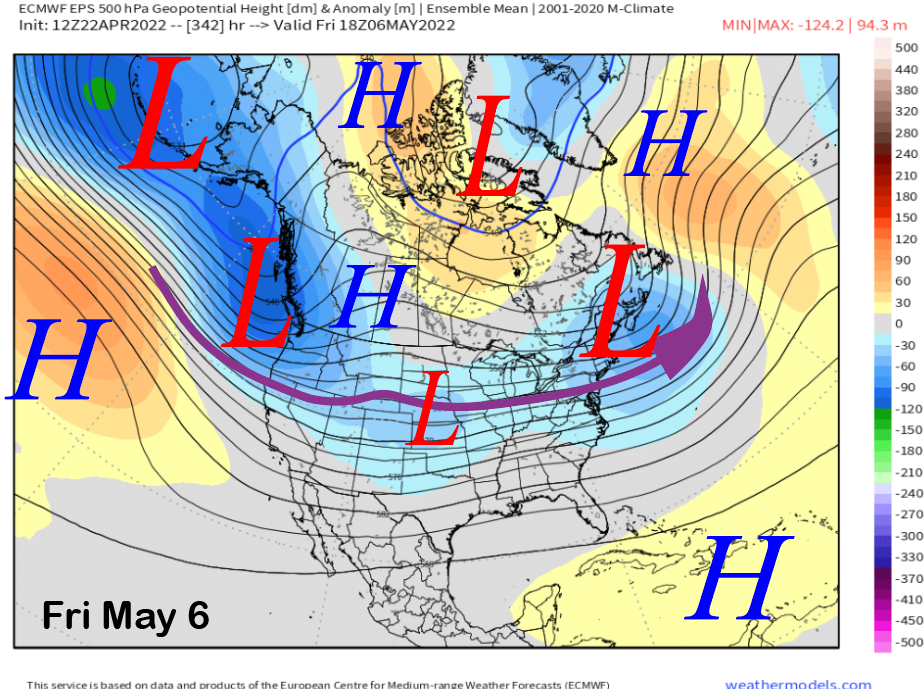 The ECM EPS precipitation forecast is showing light amounts (image below) for Mammoth over the period.  Thus, there certainly is a chance for another spring storm before the mountain closes, but my senses have no clairvoyance about exactly when.  Best guess right now would be end of the month or first part of May.  WG 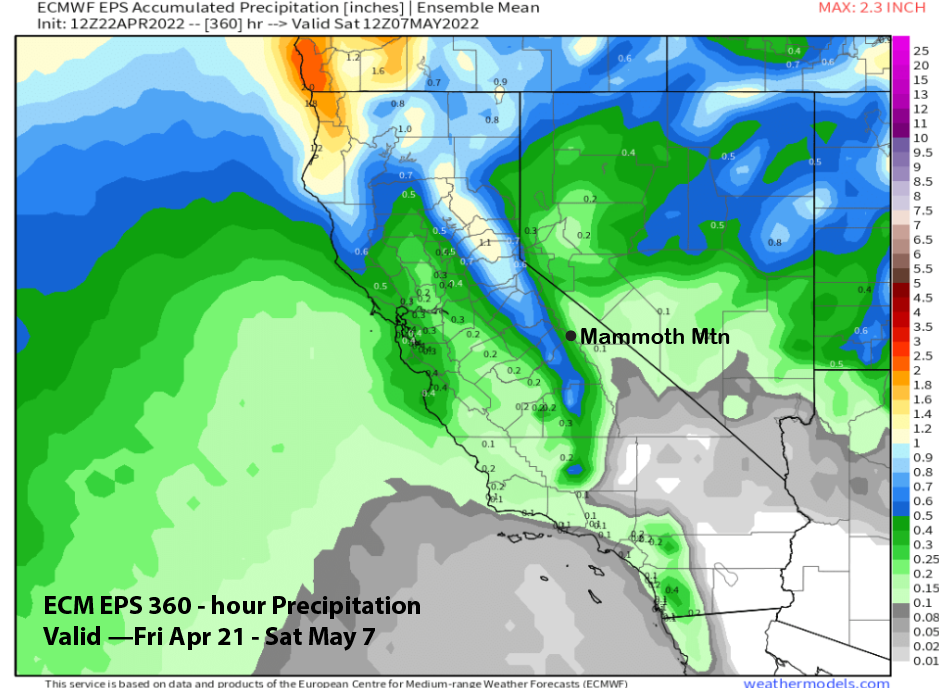