The current infrared satellite image (below) shows high pressure building into the northern part of the state and a weak area of low pressure moving southward along the Central Coast. The end result is clear skies and breezy east winds today and into tomorrow.

Models keep high pressure in place into Thursday (image below) for fair weather and light winds before moving an inside slider short-wave southward through eastern CA on Friday (two images below).  That will produce slightly colder temperatures and more breezy northeast or winds that will likely increase during the day Friday before decreasing by early Saturday when lighter winds are expected under continued dry conditions.

The longer-range guidance is mostly unchanged from the previous update and favors dry weather through next weekend with just a chance for light snowfall early next week before a more substantial pattern change is possible over the last part of the month.

The ECM moves a splitting upper-level short-wave trough into CA around Tuesday (image below) next week and it may have enough left for some light snowfall in Mammoth.  But probably not enough for powder conditions as it is only showing very light amounts (two images below). 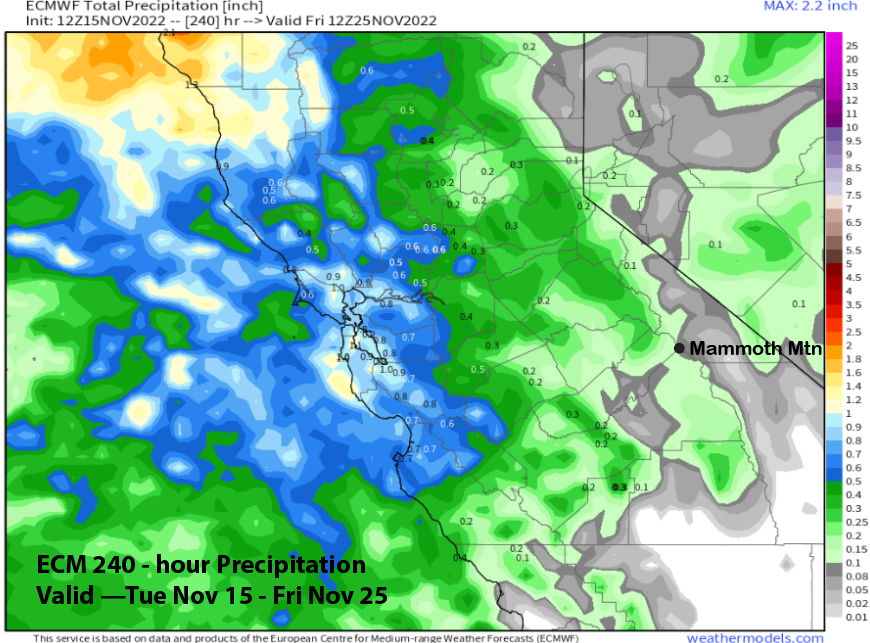 The other models differ slightly with the Canadian the wettest at up to half an inch liquid while the GFS model is much weaker with the system and completely dry (image below). Thus, there is a chance for low-end powder conditions, but they are certainly not likely right now.  High pressure is then expected to build into the state for the rest of the week for fair/dry weather. 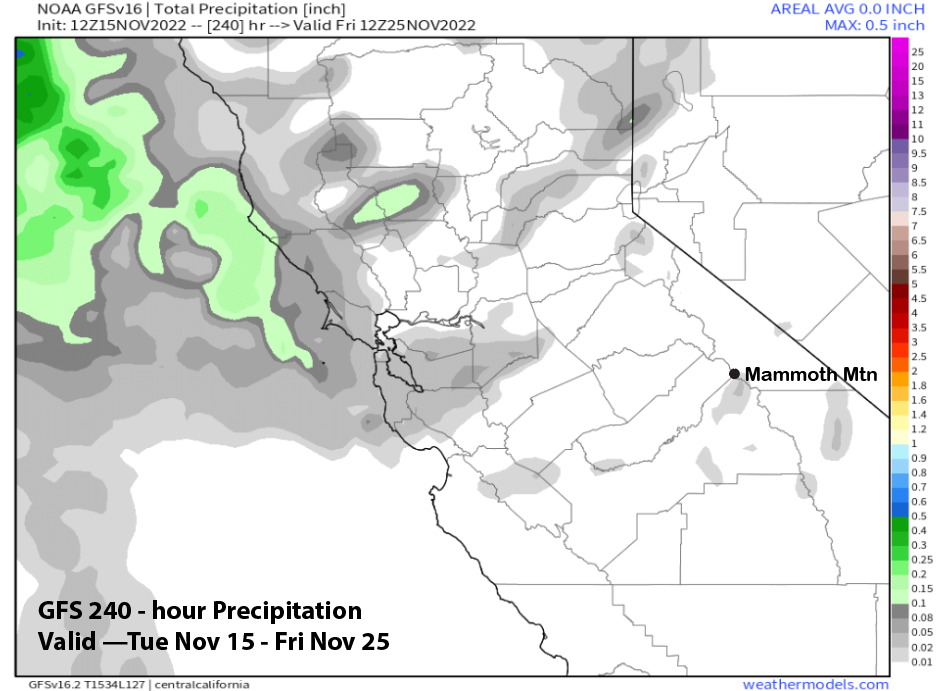 The fantasy range guidance says the next chance for any meaningful snowfall won’t be until the end of the month. However, the models seem to be moving that “chance” a little further out in time with each model run.

Nonetheless, the ECM EPS (image below) and GEFS (two images below) are in strikingly good agreement that a long-wave trough will develop along the West Coast during the last part of the month as a downstream effect of strong ridging over the Aleutian Islands. 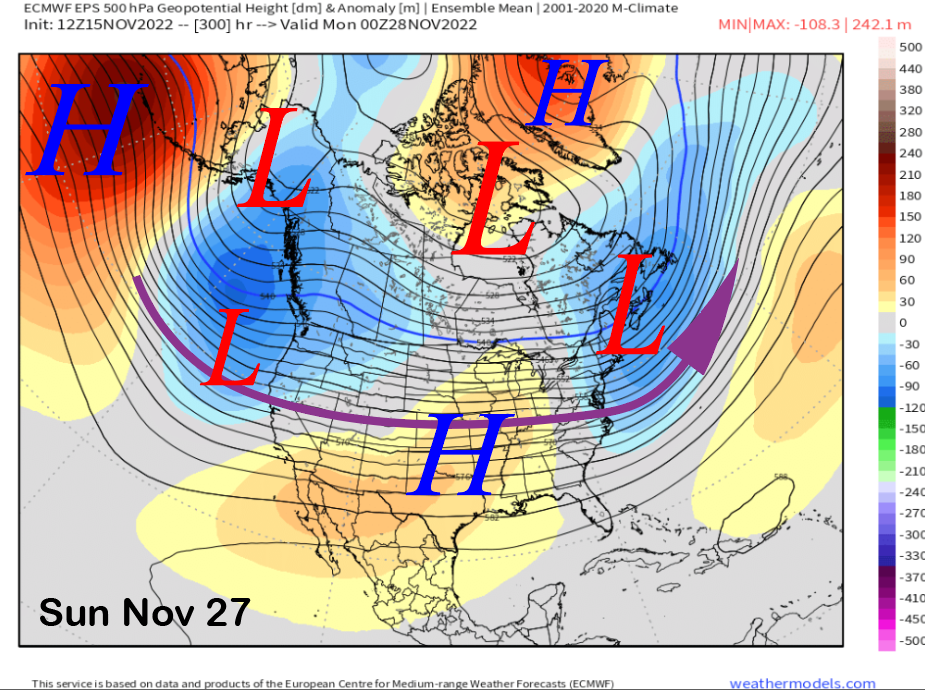 The models then basically keep that long-wave trough in place along the West Coast through the end of the month (images below) for continued chances for storm passages. 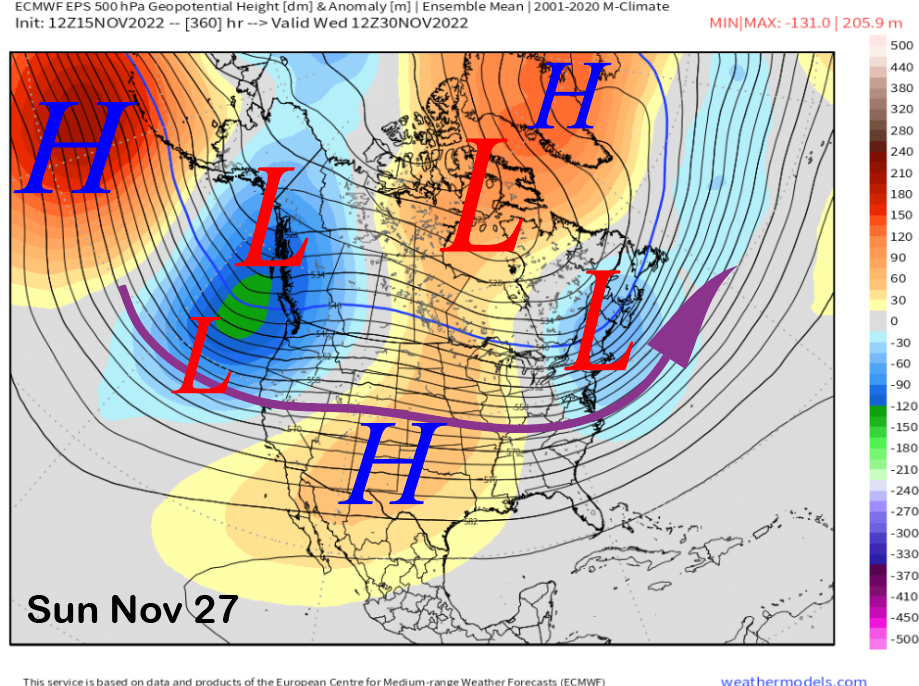 Currently, the models are not bullish on a major storm pattern with the EPS precipitation forecast only showing around 1 inch of liquid for Mammoth (image below). The GEFS is similar. 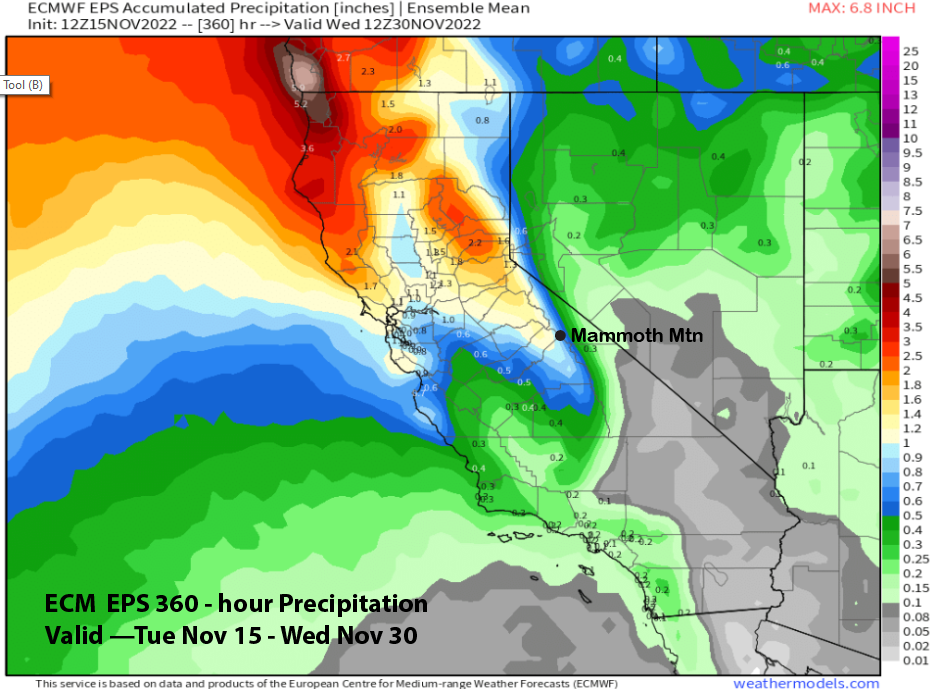 Regardless, it does represent the next chance for powder conditions and there is some support for these solutions based on the MJO moving into phase 7 around the same time. Phase 7 in November and December can be wet, although statistical significance is not high.  Fingers crossed.  WG